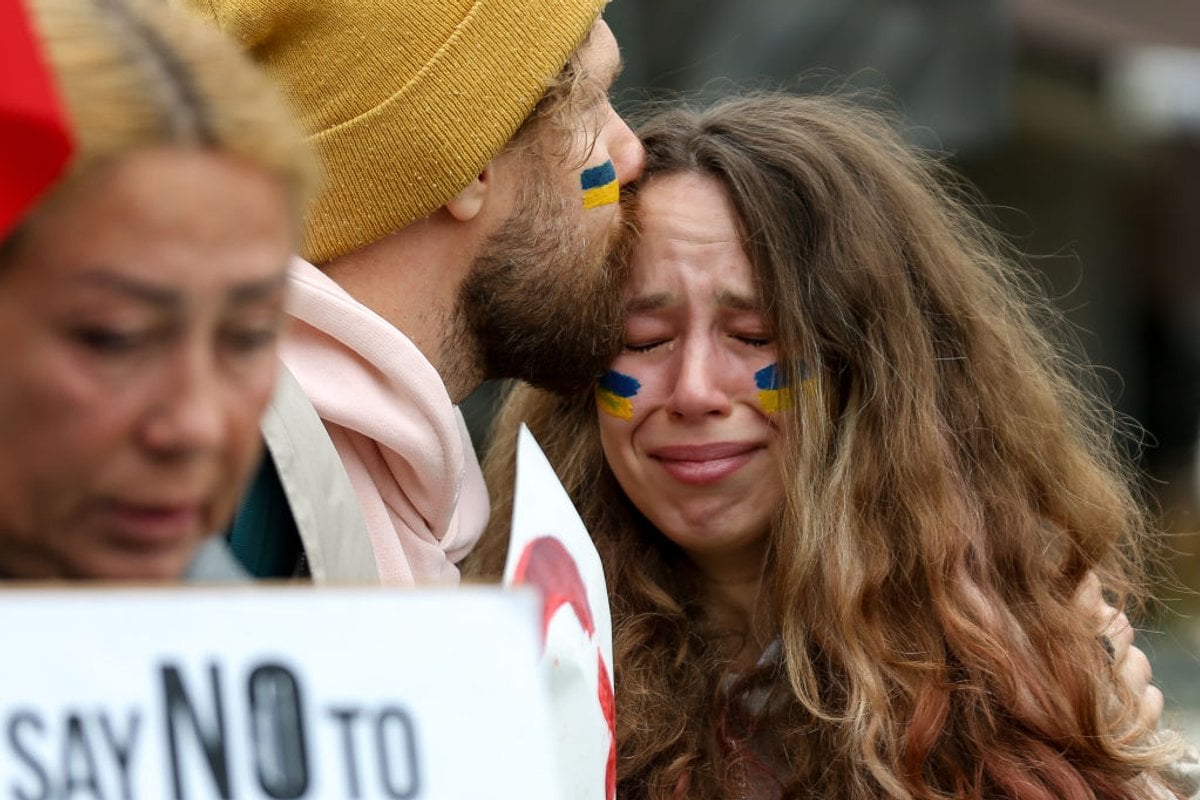 Right now, the world is watching as Russia invades Ukraine in the biggest attack by one state against another in Europe since World War II.

Images of metro stations filled to the brim with citizens taking cover and tanks rolling onto Ukrainian soil fill our social media feeds as world leaders respond to the invasion with sanctions and speeches.

People in Kharkiv preparing to spend the night inside the metro as battle in the street of the city continues pic.twitter.com/M426LeFizg

In the hours and day following, thousands around the world, including Russians, have taken to the streets to show their support for Ukraine and condemn Putin's military aggression.

While many of us might feel helpless watching the unfolding situation from home, there's a lot we can do right now to help.

From supporting emergency aid on the ground to supporting local journalism, here are just some of the ways we can support people in Ukraine.

UNICEF is the world's leading organisation working to "protect and improve the lives of children" worldwide.

They're currently delivering on-the-ground emergency relief to the people of Ukraine with safe water, health care, protection from violence, and psychological support.

It's also repairing schools damaged by the bombings and providing emergency response to children affected by the conflict.

As hostilities intensify, @UNICEF is scaling up support for children. https://t.co/p4pWNt2TXF pic.twitter.com/KS59SYxSUb

You can donate to UNICEF here.

United Help Ukraine receives and distributes donations, food, and medical supplies to internally displaced Ukrainians, anyone affected by the conflict, and the families of wounded or killed soldiers.

You can donate to United Help Ukraine here.

The Ukrainian Red Cross Society are raising money to support volunteers and staff by providing first aid in areas where access to medical services will be limited.

Donate to support the Ukrainian Red Cross and its work to help civilians in this difficult time for Ukraine! You can donate on
✅ URCS website: https://t.co/Pd2XUFxZxQ
✅ iRaiser platform:https://t.co/5q1PILyc6E

You can donate to the Ukranian Red Cross here.

Support local journalism and educate yourself with reputable sources.

The Kyiv independent describes itself as "created by journalists who were fired from the Kyiv Post for defending editorial independence".

According to the State Emergency Service of Ukraine, there is a risk of demolition. Buildings that were hit by the debris are on 7A Koshytsia Street.

The New Voice of Ukraine

The New Voices of Ukraine is currently reporting on breaking news out of Russia and Ukraine in three languages (English, Ukranian and Russian) via their Twitter feed.

They are also releasing informative analysis on how the conflict arrived at this point, and scholar-written articles that give an indication of the tone in Ukraine today.

A curfew from 2200 to 0700 has been introduced in the capital city of Kyiv, the city’s mayor, @Vitaliy_Klychko said.https://t.co/siyTHdunVf

Twitter account, Ukraine World, is currently sharing regular posts on what is unfolding in Ukraine including important resources and information that will keep followers up-to-date.

Instagram account @withukraine is sharing concise, well-informed posts and stories to educate their followers on what is happening on the frontline, and who it's affecting.