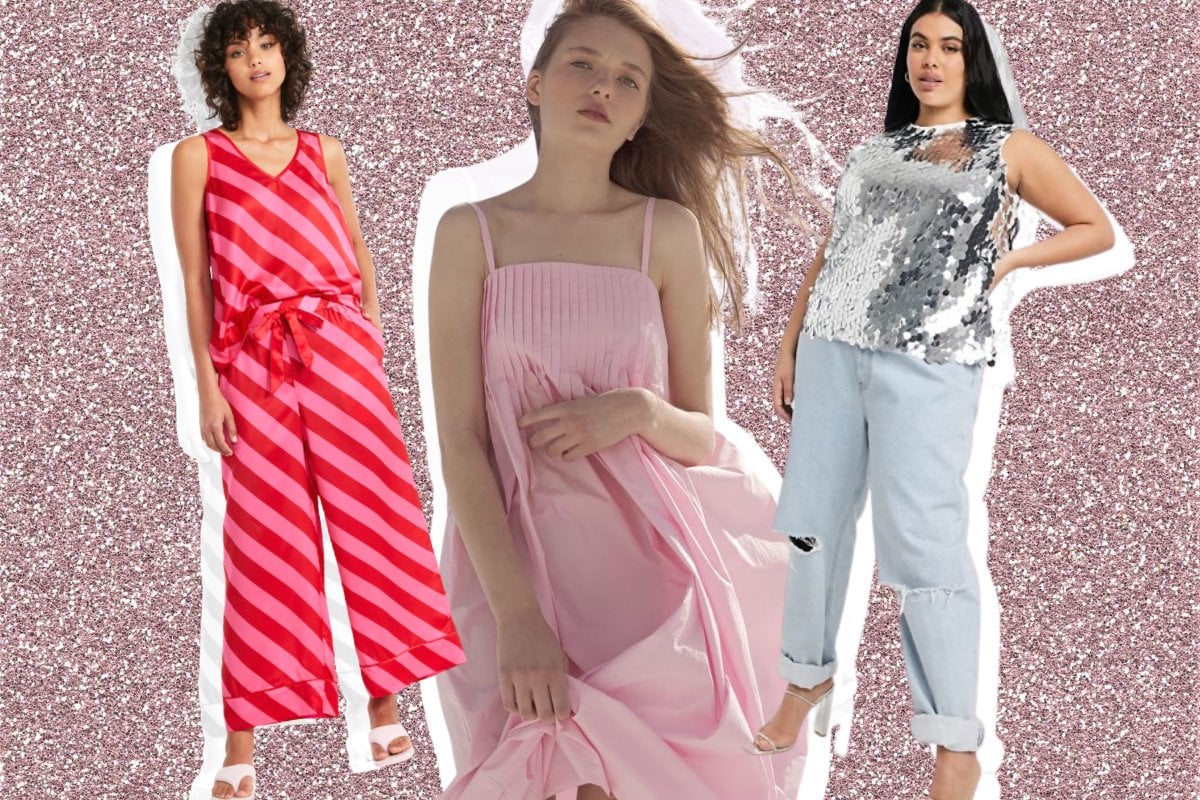 Guys, we don't want to get you too excited, but we've finally reached the end of 2020.

THANK GOD FOR THAT.

While a lot of New Year's Eve plans of big parties in the city and huddling together en masse to watch the fireworks have been thrown directly in the bin, we don't want to give up on NYE just yet.

Which is why we've found an outfit for however you're celebrating this year.

Yep, we're talking everything from glitter-clad gowns to funky PJs.

So scroll through to find the frock you'll be rocking this New Year's Eve.

For those hitting the town and wanting to SPARKLE this New Year's Eve...

Sparkly, sequined dresses are quite the staple for NYE, as we all get to the end of the year and want to look like an entire bin bag of glitter has been thrown at us from a distance. And rightly so! Nothing makes you feel more festive than twinkling like a disco ball, so lean into the trend with this glittery picks. 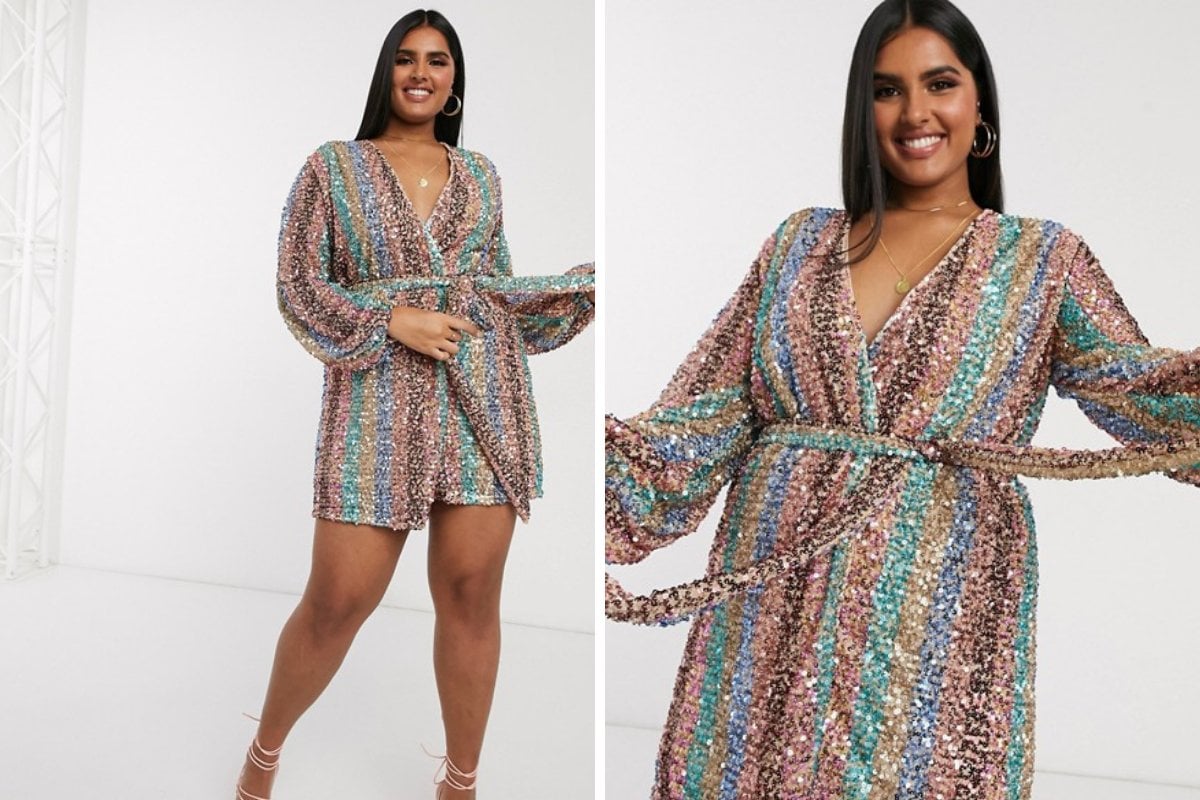 As well as this Atmos & Here Daria One-Shoulder Sequin Dress ($59) from The Iconic. 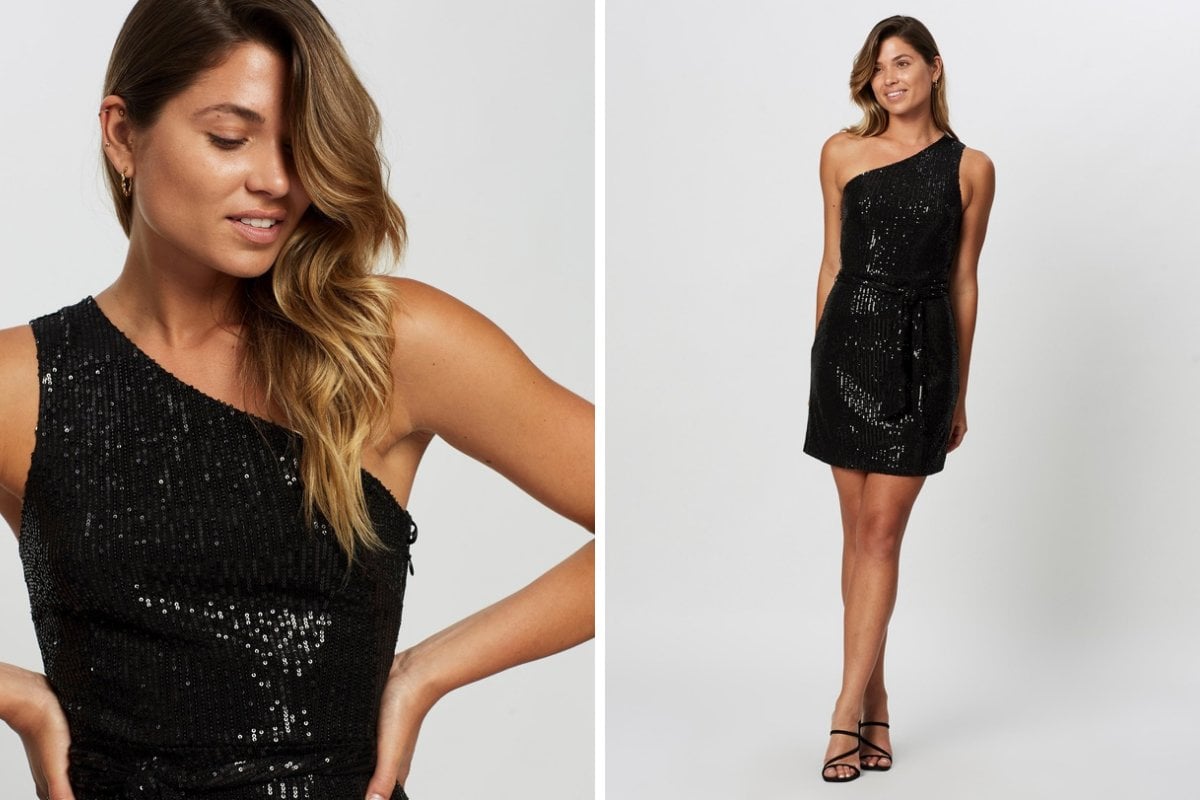 For those celebrating New Year's Eve at home...

Let's be honest, approximately none of our big party plans have come into fruition in 2020, so if you have low expectations for the final night of the year then perhaps a low-key pyjama party is on the cards?

Even if you're spending your night in alone or just with your housemates or family, we recommend treating yourself to some fancy-pants PJs to make you feel a little special while also being ridiculously comfy. 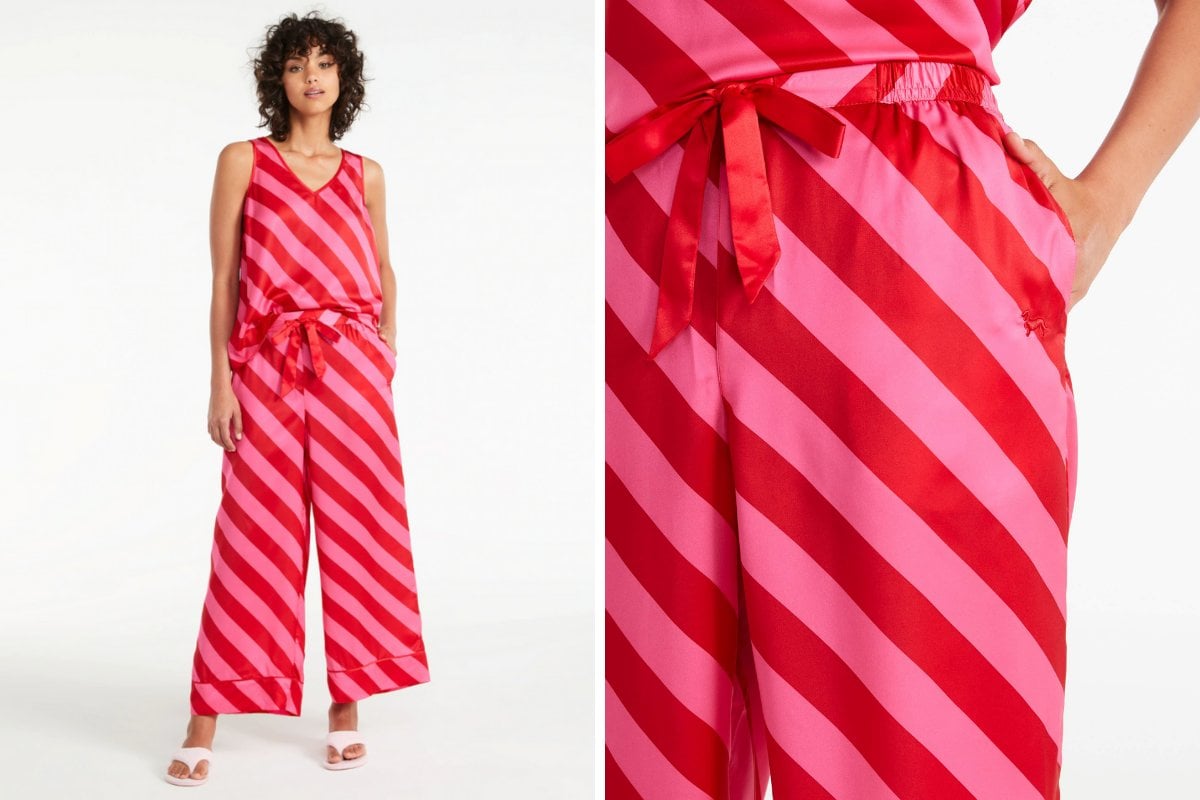 As well as this Vero Moda Curve satin pyjama set in navy floral print ($90) from ASOS. 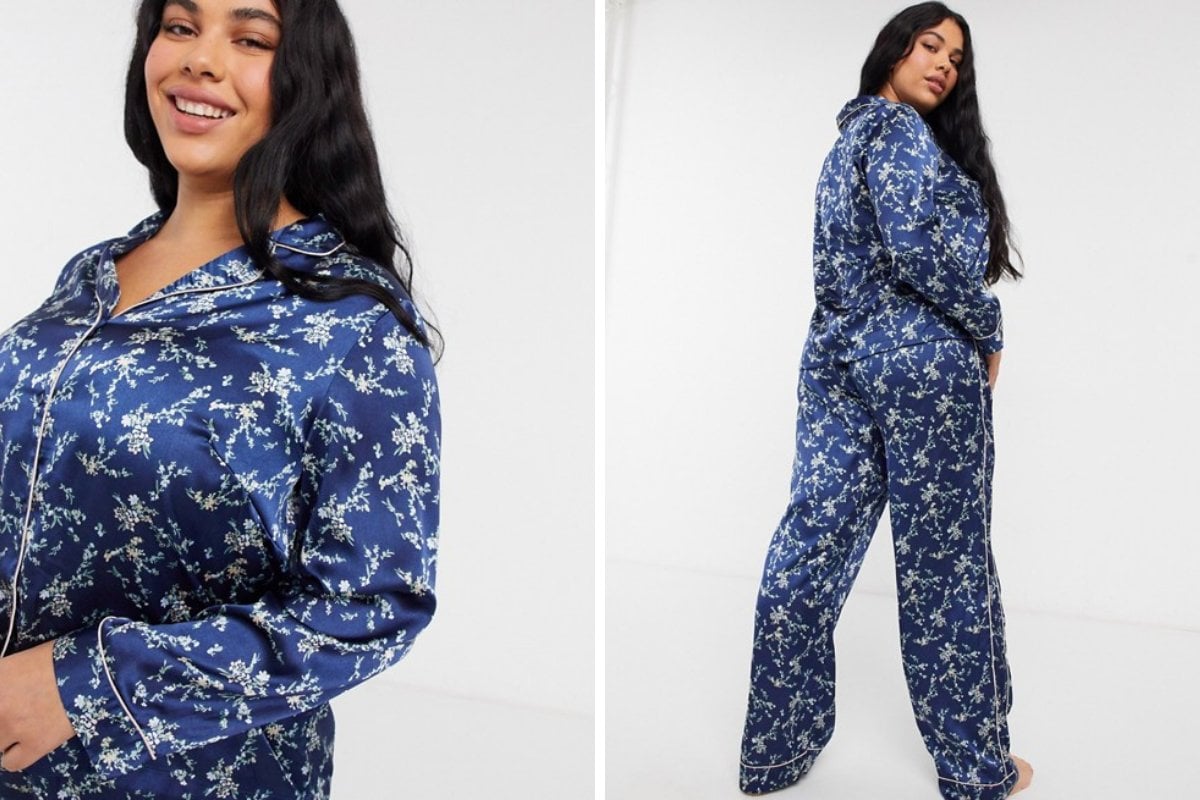 For those looking for comfort as well as style...

2020 has been the year of going bra-less and wearing the sloppiest of slouchy clothes, so even if we're going out this New Year's Eve, the last thing we want to feel is uncomfortable. Which is why we've hunted down the comfiest outfits that you will still look PHENOMENAL in. You're welcome.

Big fans of this ASOS DESIGN curve sequin tux jumpsuit in gold ($70) by ASOS, for easy one piece comfort that will only become a pain when you need to pee. 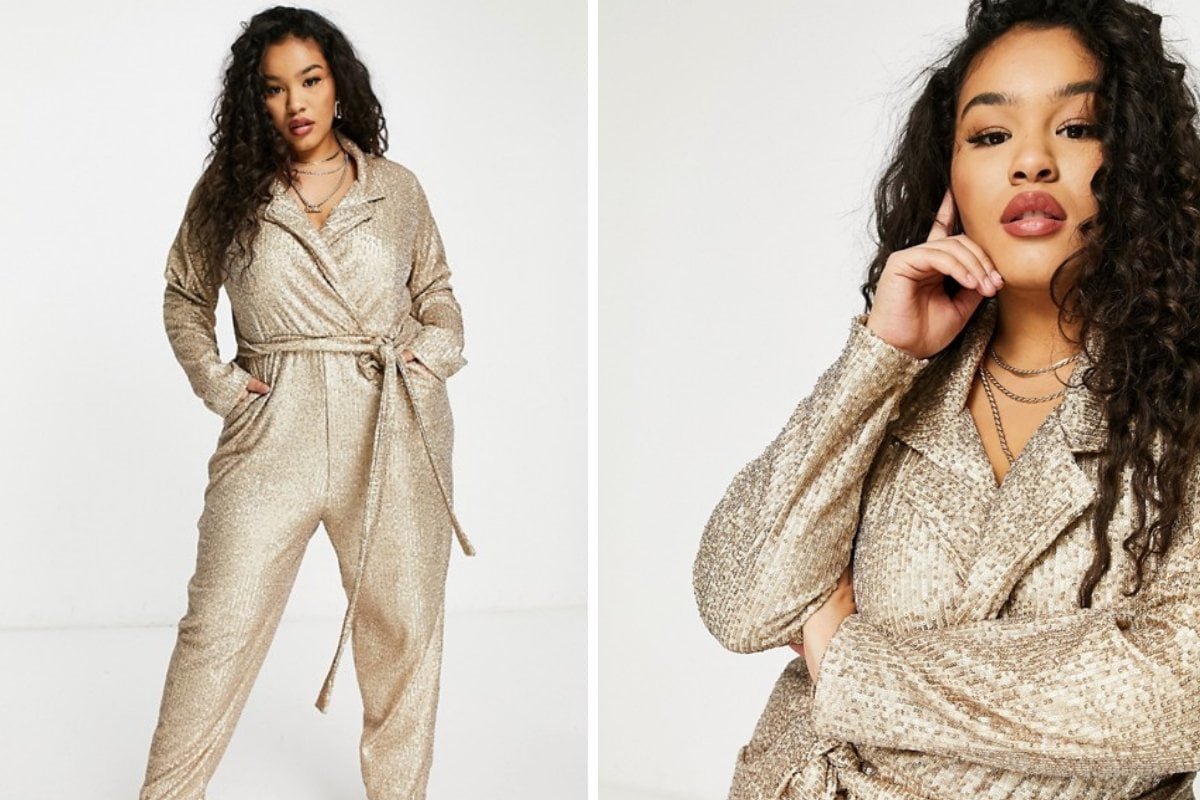 For those with commitment issues...

We know splurging on a New Year's Eve outfit to wear for literally one night only can seem excessive, so why not rent an option instead? There are heaps of rentable options in Australia and it's as easy as ordering your fave looks online, getting them shipped, living your best life in them for a couple of days and then sending them back in the same box they arrived in. TOO GOOD. 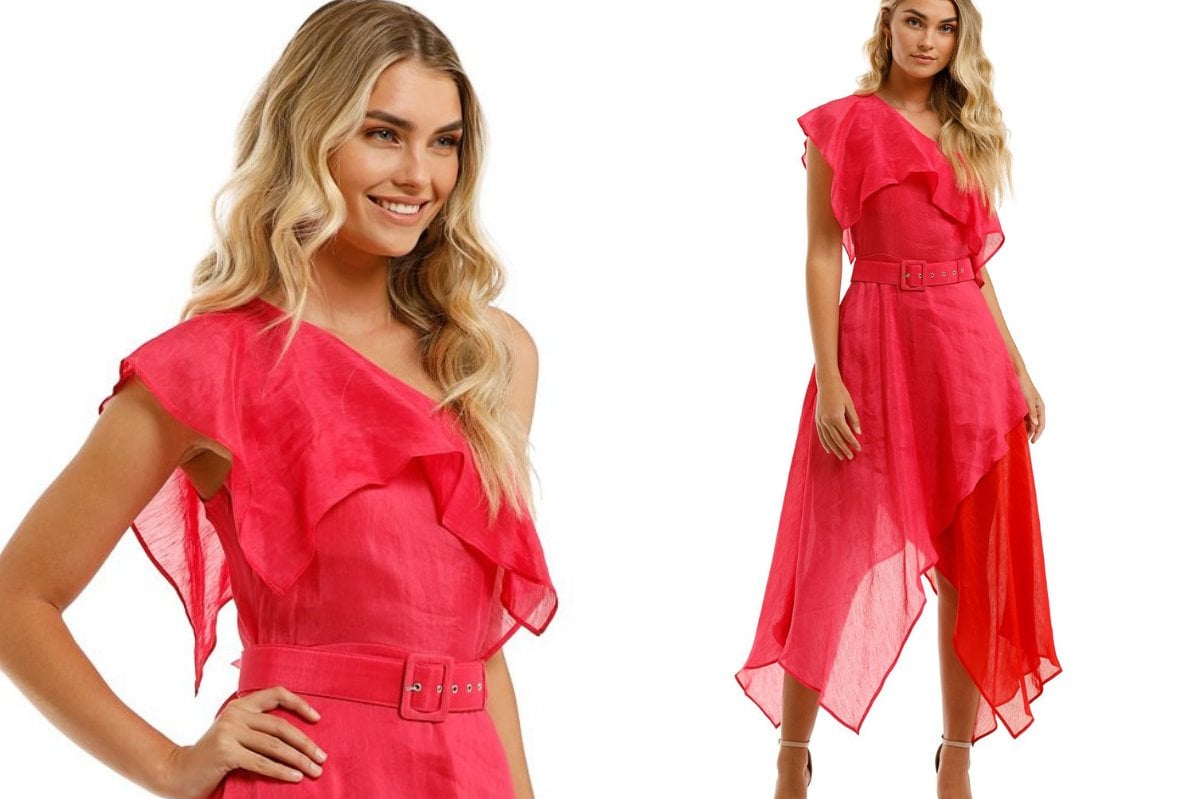 As well as this Ministry Of Style Gazania Mini Dress ($34.50) from Glamcorner. 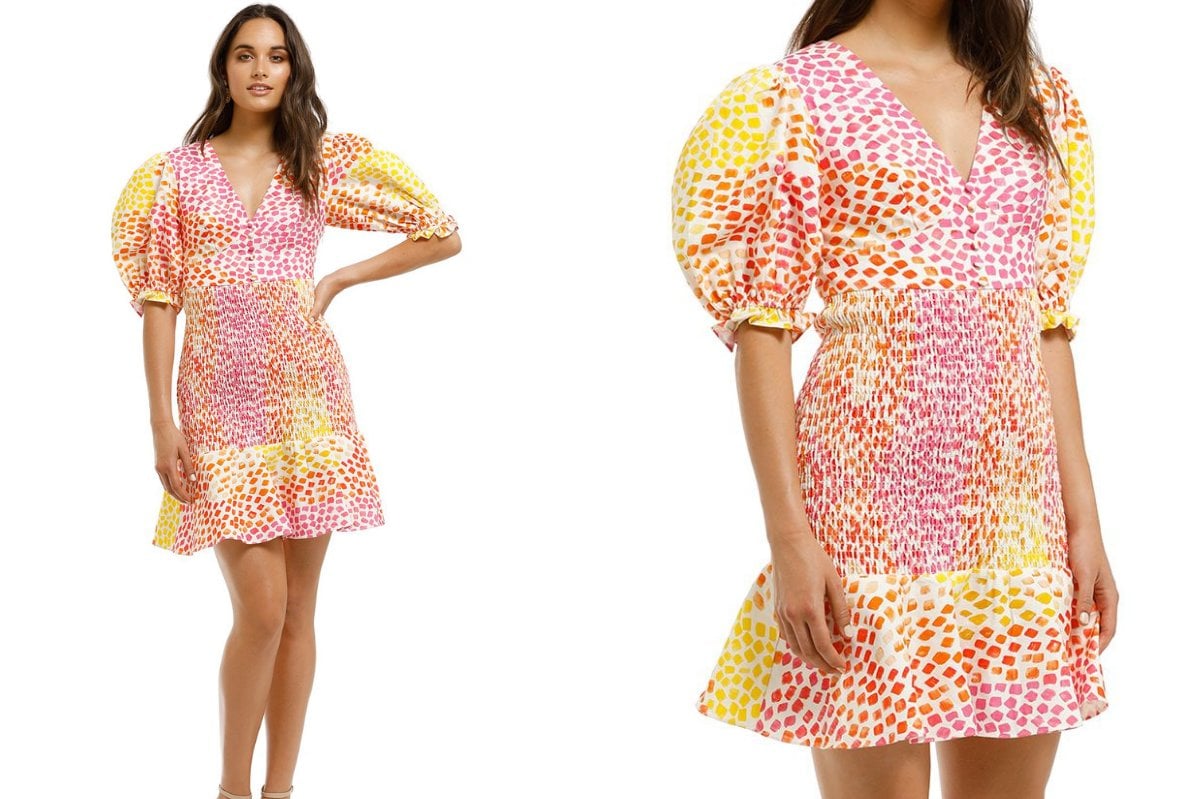 For those having a chill NYE hang with the family...

You know what? This actually sounds pretty damn good. Chilling out with the fam in the garden, eating Christmas leftovers, catching up and having a good old laugh. This sort of soiree requires a more flowy, relaxed dress that you'll feel as comfortable on the couch as you would facing off your relatives for a competitive game of beer pong.

We love this Sylvie Dress ($185) from Marshmellow Boutique. 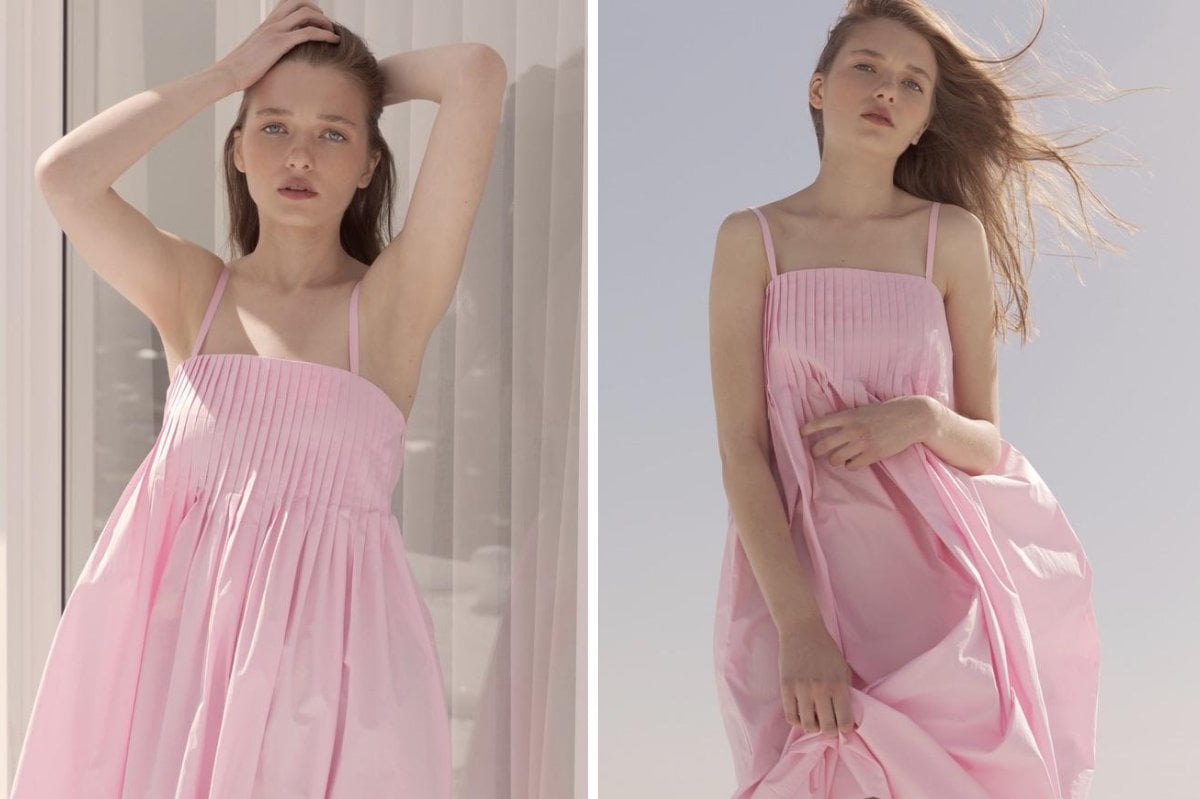 Obsessed with this In The Style Plus x Lorna Luxe puff sleeve smock dress in pink floral print ($64) from ASOS. 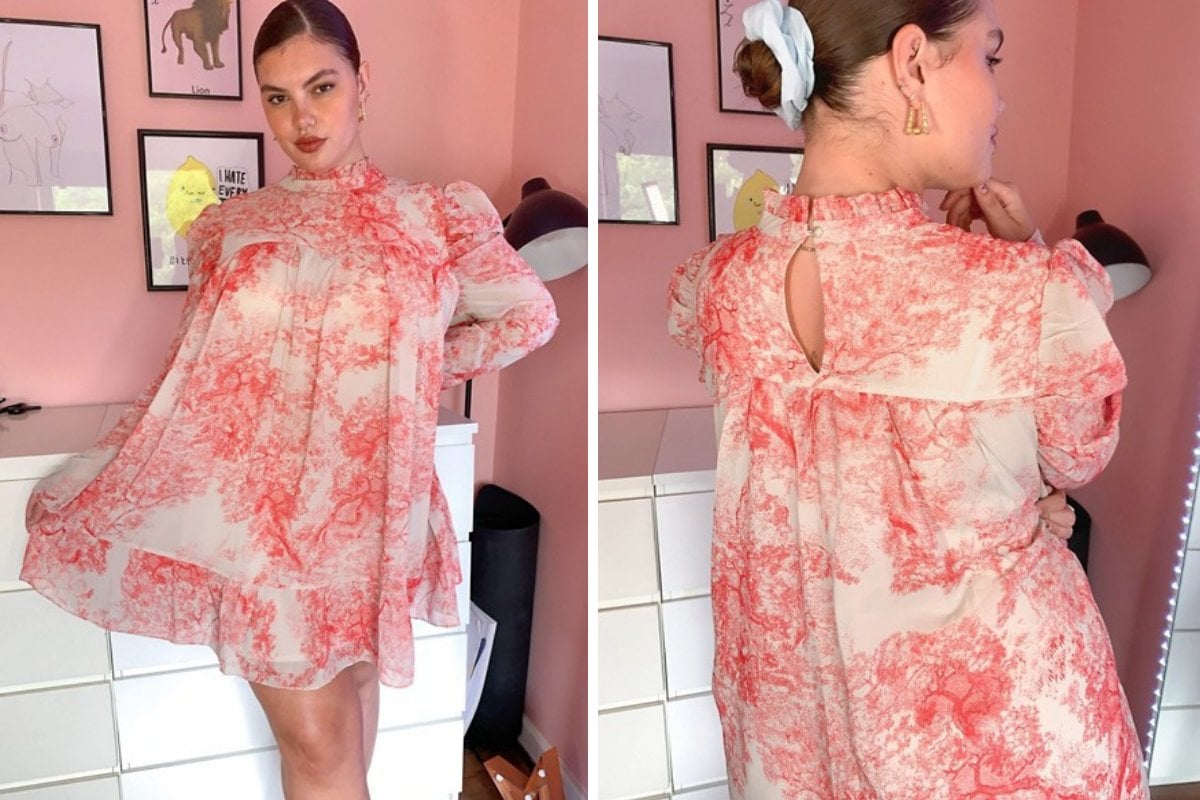 For those having a Zoom celebration this New Year's Eve...

Ahh Zoom. The technology no one could have predicted would become such a key part of our working and social lives.

If you're celebrating NYE with people not actually in your bubble, state or country then there's definitely a Zoom date on the cards for you. The good thing about dressing for Zoom is that you only need to focus on the top half, so opt for powerful shoulder detailing and keep things seriously comfy on the bottom. We're talking sweatpants and slippers south of your belly button. Bliss.

Say hello to this ASOS EDITION top with exaggerated sleeve in sequin drench ($68) from ASOS. 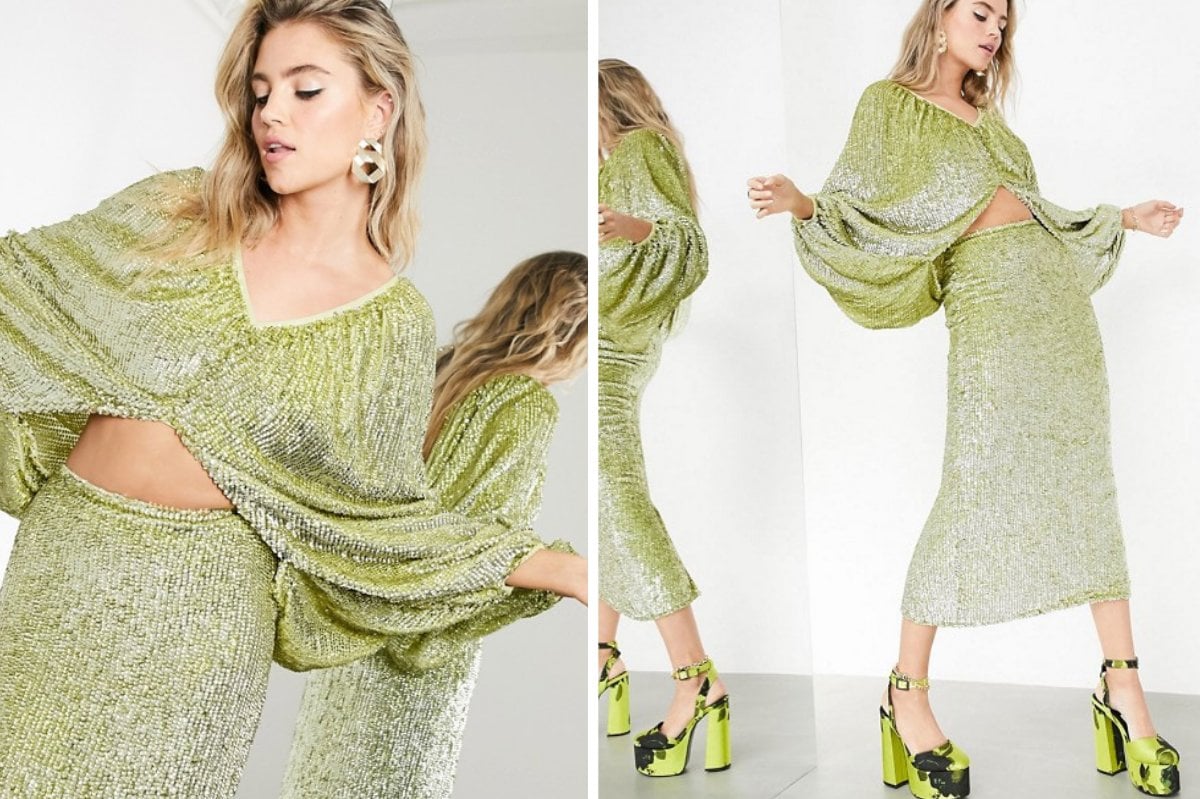 For a Zoom-worthy rental option, look no further than the Acler Beston Dress in Lemon ($59.50) from Glamcorner. 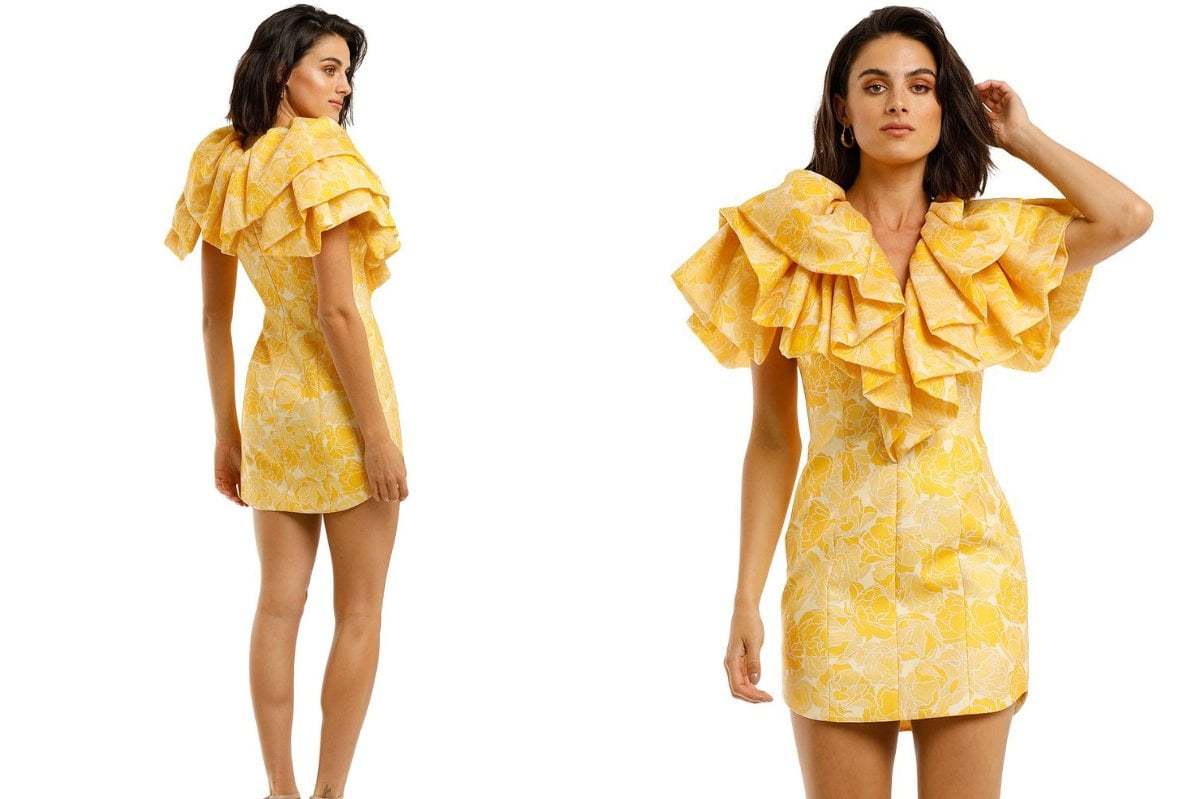 And because we simply had to end on a sequined number, here is the Never Fully Dressed Plus high-neck sequin disc top in silver ($139) from ASOS. 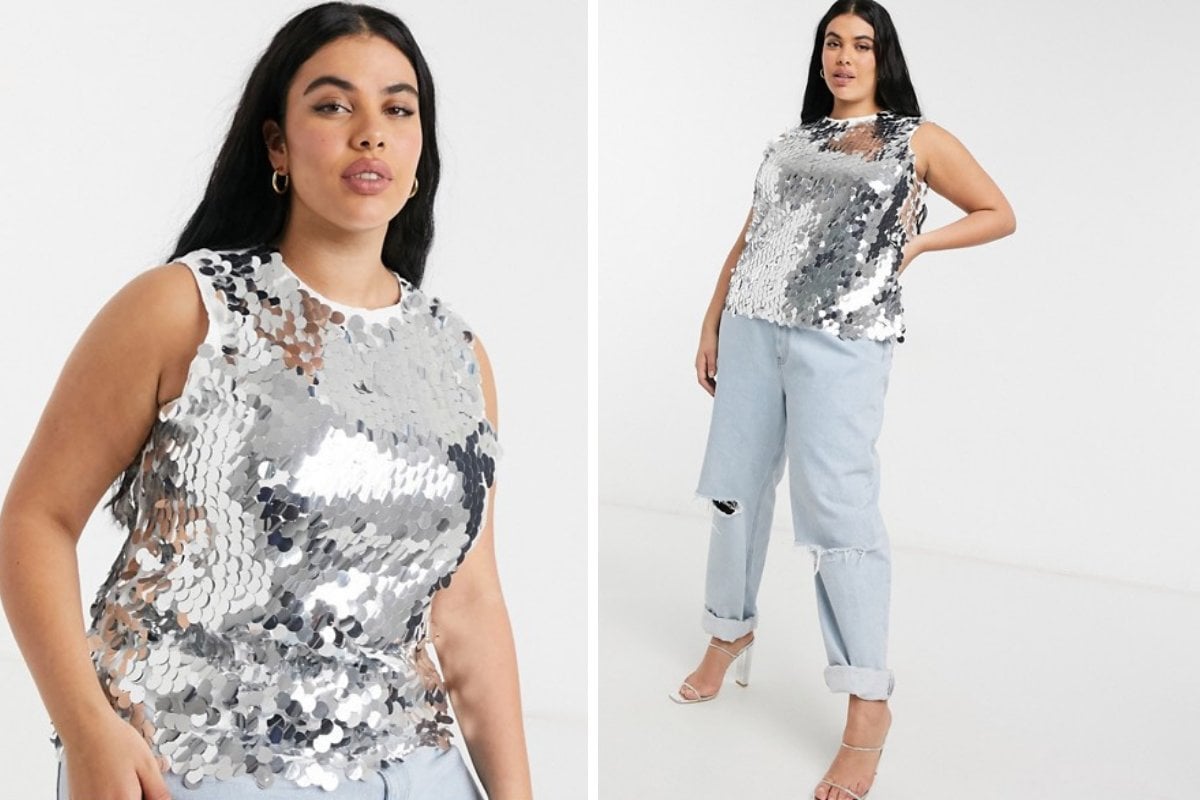