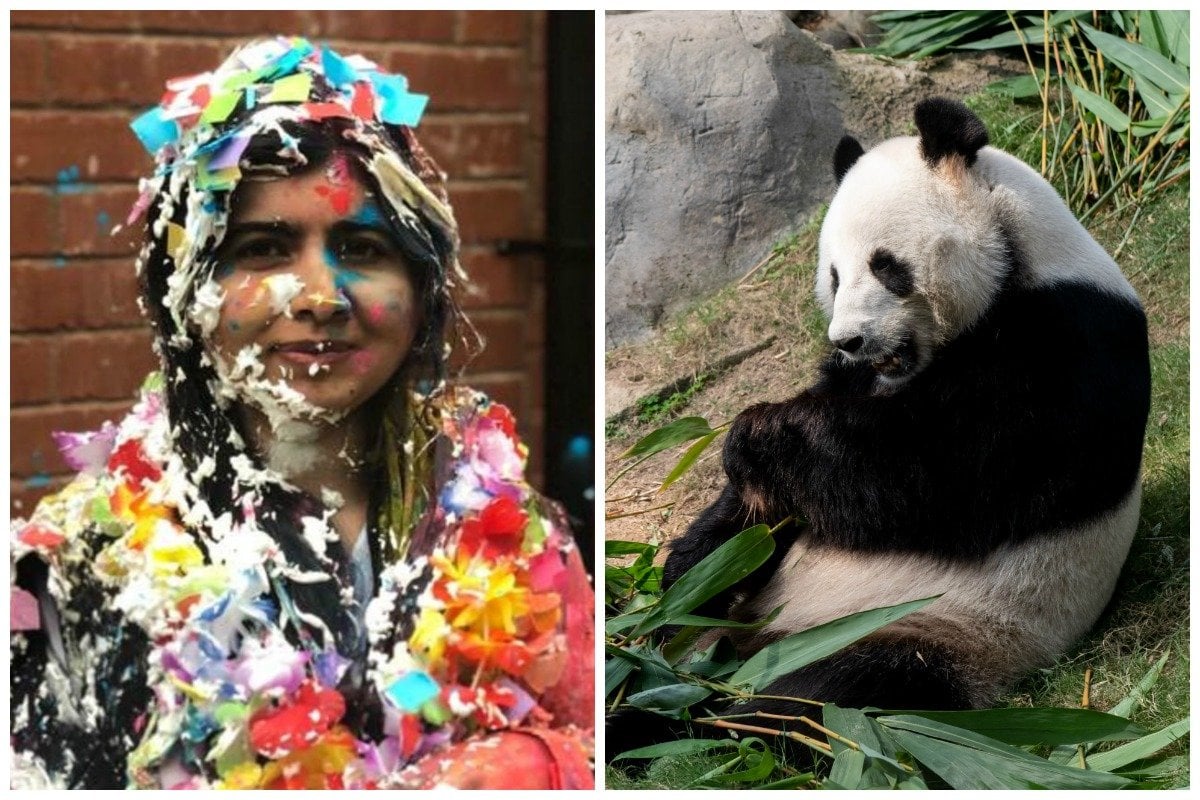 In 2020, people have been seeking out 'good news' more than ever before.

In a year of collective grief, trauma and sacrifice, with our daily news headlines and social media feeds dominated by negativity, it's easy to see why.

A look at Google Trends really shows just how much. I looked at data over a number of timeframes, but the below graph from the past five years of Google searches for 'good news' across the world is just so telling.

That first major spike? That was from the end of 2019 and beginning of 2020, when the world was celebrating the end of what was widely considered to be a bad year (oh, if only we knew) and entered a new one... to catastrophic bushfires, threats of WWIII, floods, earthquakes and eruptions.

The second big surge on the graph covers the entirety of March and April - and I don't need to remind you of what was going on back then.

From there on, the search term has maintained levels higher than at any other point since November 2015.

So... let's give the people what they need.

Because good things did happen in 2020 (and many of them, naturally, are animal related). Here are 60 examples you may have missed as proof.

1. In January, Angel the cat's family were forced to flee without her when their property in the Bega Valley caught alight. Somehow, she survived seven days in the middle of the firestorm, before making it back to her owners – singed but okay.

2. Truces between nations have more chance of succeeding if women are involved in peace talks, according to research by UN Women and the Council on Foreign Relations, which found that armistices were 64 per cent less likely to fail when women had a seat at the table.

3. In April, British Veteran Thomas Moore raised more than £32 million (AU$58 million) for the country's National Health Service by walking 100 laps of his garden before his 100th birthday during the first lockdown. His birthday was marked with flypasts by the Royal Air Force and the British Army, and he received over 150,000 birthday cards. In July, he was knighted by the Queen. Since then, Sir Thomas has spent his time speaking to lonely people over the phone.

4. Kindergarten will be free across the state of Victoria in 2021.

5. Eight years after Taliban gunmen shot Malala Yousafzai in the head due to her criticism of the group’s belief that girls should not attend school, Malala graduated from Oxford University in June.

6. A research team has been using 'Coral IVF' to fertilise sections of bleached coral in the Great Barrier Reef. The Marine Ecology Research Centre at the Southern Cross University believes kilometres of damaged reef could be re-seeded with the process in three to five years.

9. Malawi has successfully eliminated elephantiasis, a disease spread by mosquitoes which infected nearly 80 per cent of the population just over a decade ago.

11. A study by Canine Cottages found that a dog's heart rate increases when their owners tell them 'I love you'.

12. A farmer from the Northern Territory told the ABC in October he had received more rain over three days than he did in all of 2019.

13. In fact, in February 2020, 99 per cent of New South Wales was affected by the dry conditions provoked by the drought. Now, figures from the NSW Department of Primary Industries show that nearly 90 per cent of the state is either no longer in drought or is in recovery, according to the Canberra Times.

15. In their October election, New Zealanders elected one of the world's most diverse parliaments. 48 per cent of MPs are women (the highest rate in the OECD), 11 per cent are LGBTQ and 21 per cent are Māori.

16. Homeless student Gordon Wayne walked more than 800 kilometres from central Virginia to Massachusetts, raising more than AU$186,000 for the National Alliance to End Homelessness. He received a full scholarship to Boston College, which will also cover his board.

17. When Australia entered nationwide lockdown in March, millions of litres of the unused beer was sent to the Glenelg Wastewater Treatment Plant in South Australia where it was converted into renewable energy.

18. In November, the World Health Organisation launched its global strategy to eliminate cervical cancer, estimating successful implementation of vaccination, screening and treatment could reduce five million deaths by 2025. It is the first time that WHO's 194 member countries have committed to eliminating cancer.

19. In August, Giuseppe Paternò became Italy's oldest graduate after he was awarded first-class honours in philosophy from the University of Palermo in Sicily, aged 96. He said it was the realisation of a lifelong dream, and "one of the happiest days of my entire life".

20. Sudan's government outlawed female genital mutilation, a historic change in a nation where the United Nations estimates about nine in 10 women are subjected to FGM.

21. Blind inventor Kursat Ceylan developed the 'Smart Cane' to make getting around easier for the world's 250 million visually impaired people. The cane uses Google Maps and ultrasonic sensors to warn the user of nearby objects and obstacles through vibrations in the handle.

22. The Dutch city of Utrecht has turned more than 300 of its bus stops into shelters for bees.

23. The RSPCA received enough donations over the 2019/2020 bushfire season to build a new $1.84million koala hospital in Melbourne's outer west.

24. Scotland made period products free to all who need them.

25. A nine-year study at a Norwegian wind farm concluded that bird strikes can be cut by up to 70 per cent by painting one blade of a wind turbine black.

26. Several Amazon tribes in Brazil have been trained to operate drones to watch over the rainforest and spot illegal tree clearing, farming and ranching.

27. In early March 86,174 people packed out the MCG to watch the Australian women's cricket team play in the Twenty20 World Cup final, the highest ever attendance for a female sporting event in Australia.

28. On May 30, the highly anticipated SpaceX Crew Dragon launch was successful, marking the first time a commercial aircraft has sent astronauts to orbit and opening up further possibilities for space exploration.

30. Two pandas in Hong Kong zoo had been trying to mate for a decade, with no success. When the zoo closed to the public during the COVID-19 pandemic, Ying Ting and Le Le finally got down to business.

31. An October UNESCO report shows that 180 million more girls have enrolled in primary and secondary education compared to 25 years ago. Additionally, three times more women are now enrolled in universities.

32. In November, a chartered flight of 66 animals separated from their owners who had to return to Australia due to the COVID-19 pandemic arrived in Melbourne. After 10 days of quarantine, the cats and dogs were reunited with their very relieved humans.

33. In October, service at a Thai restaurant in the small New Zealand town of Huntly was frustratingly slow with long queues forming. But after spotting just one chef run off his feet - because all other staff were unavailable due to a family emergency - customers rolled up their sleeves and got to work. One took orders, others washed dishes, cleaned tables and ran the till until it was a fully-functioning restaurant again. One customer even stayed to help the chef close down at the end of the night.

34. Spanish 113-year-old Maria Branyas, Spain's oldest living person, beat COVID-19 after being diagnosed with the virus in April to fully recover. It is believed she is the oldest survivor of the virus in the world.

35. Tasmanian devils have returned to Australia's mainland for first time in 3000 years.

36. British veteran Neil Heritage made history as the first double amputee to scale the Matterhorn, 16 years after losing both his legs in Iraq in 2004. This climb raised more than AU$10,000 for his veterans' charity.

37. French beekeepers reported three colonies of bees who had lived in the roof of Paris' Notre-Dame Cathedral, which caught fire in 2019, not only survived the inferno, but thrived during the COVID-19 lockdown.

38. Three-year-old Elif Perincek was found alive under rubble, 65 hours after a deadly earthquake hit the Turkish city of Izmir. She had no serious injuries.

39. Two 12-year-old beluga whales who spent years in captivity entertaining humans at an aquarium in Shanghai, China, have found freedom at an open water sanctuary in Iceland. Little Grey and Little White are once again swimming in open water for the first time since 2011.

40. In November, 21-year-old Chris Nikic became the first person with Down Syndrome to finish an Ironman race.

41. The Iberian lynx, endemic to Spain and Portugal, has seen its population grow from 94 in 2002 to 855 in 2020 thanks to conservation efforts, clawing its way back from the brink of extinction.

44. After 804 days in custody in Iran, Australian academic Kylie Moore-Gilbert arrived back in Australia, expressing her gratitude to those who never gave up on getting her home.

45. Tristan da Cunha, an island with 245 permanent residents, is creating a marine protection zone to safeguard endangered rockhopper penguins, yellow-nosed albatross, and other wildlife in an area of the South Atlantic three times the size of the United Kingdom. The sanctuary will be the biggest in the Atlantic Ocean and the fourth biggest anywhere in the world.

46. New Zealand's Countdown supermarkets became the first in the world to use the words 'period care' instead of 'sanitary items' on aisle signage.

48. In October, the NSW Court of Appeals ruled that pets are now officially permitted in every single NSW apartment block, by law.

49. As Hurricane Delta closed in on Mexico's Yucatan Peninsula in October, Ricardo Pimentel opened his home to about 300 dogs, as well as cats, chicks, bunnies and even a hedgehog. Meanwhile, his patio became a safe haven for a flock of sheep. His house smelled terrible, but it was worth it - all the animals survived the devastating storm.

50. The air in Europe is getting cleaner, according to the European Environment Agency (EEA), which announced in November that efforts to reduce pollution have prevented around 60,000 premature deaths per year since 2009.

51. A slew of letters from children concerned about plastic pollution prompted Lego to pledge in September to switch to cardboard packaging for its products from 2021.

53. In June, Oscar Saxelby-Lee, a six-year-old boy from Worcester in England, returned home from Singapore after receiving treatment for his 'incurable' cancer, and has been cancer free for six months. His story gained widespread media attention last year when thousands of people in his local community lined up at a hospital to see if they were a suitable stem cell donor for him.

54. After four years of advocacy from pop icon Cher, 33-year-old Kaavan, described "the loneliest elephant in the world", has left a small enclosure at a Pakistan zoo for a new life at a Cambodian wildlife sanctuary.

55. In August, Norway's biggest private money manager ditched its investments in Exxon, Chevron and other companies in protest over their alleged lobbying against tougher environmental standards. It is believed to be the first major investor to divest from companies over climate issues.

58. Queen Elizabeth II removed real fur from her wardrobe and will wear fake fur from now on.

60. On November 27, IKEA launched a buy back scheme as part of a drive to become more sustainable.

Is there anything we missed? What are your favourite good news stories of 2020? Let us know in the comments below.