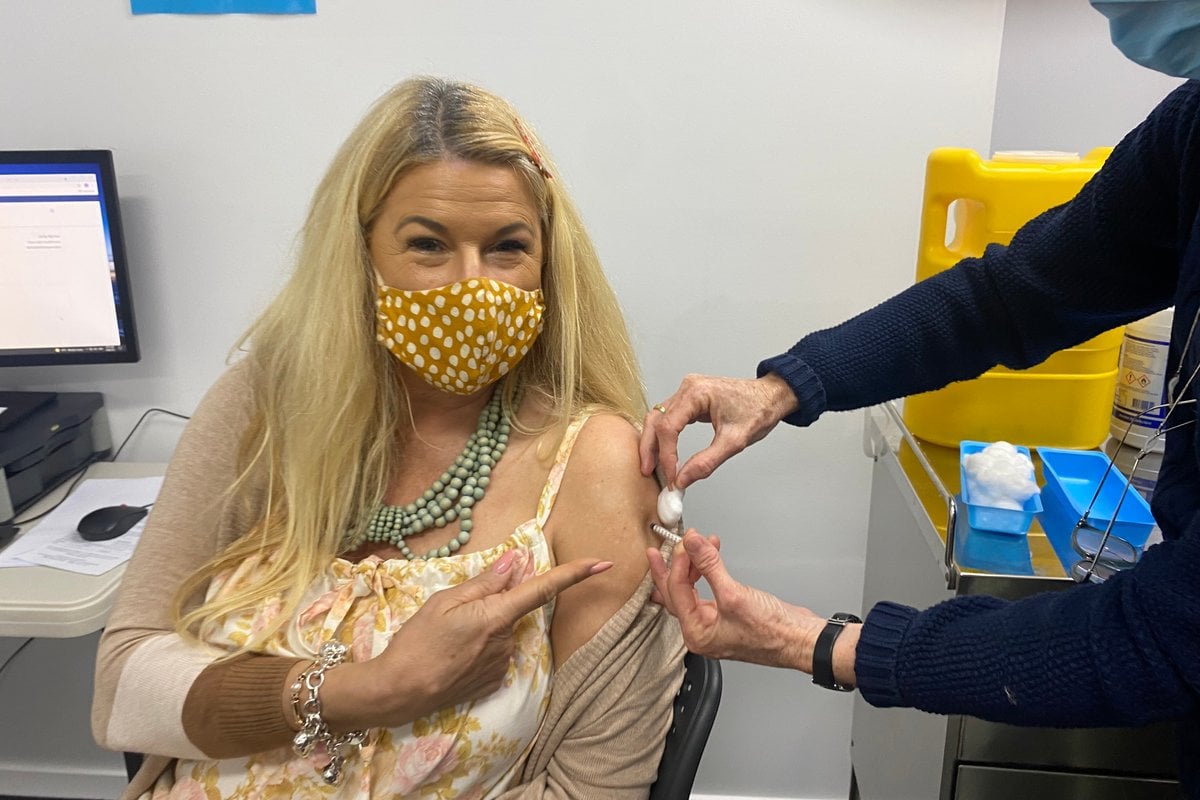 I am pro-vax but anti-vex.

That’s what I’ve been telling people in my community who have an issue with me being public about my choice to vaccinate.

I live in Mullumbimby. Way before the global pandemic, we were famed for being the anti-vax capital of Australia. We were always going to be a tough sell when it came to lining up for a jab from Big Pharma - preferring rose quartz, an affirmation and kombucha at our Big Farmer Markets.

While that is a stereotype, and doesn't represent our whole population, many people around the country are quietly watching northern New South Wales and thinking... what the f*ck.

We now have security guards at the post office, after over a third of customers refused to wear masks or check in.

Watch: A thank you to masks. Post continues after video.

I have friends and members of my community who have gone so far down the rabbit hole they’re not just focusing on their own choices, they're making YouTube videos - mistaking a Sunday night spent on Google for years of research.

Bizarrely, there are many listening to baristas and beauticians rather than people who actually went to university and studied science or medicine. I mean, if I want a wax, I’m not going to an epidemiologist. So I decided early on to take my vaccine advice from scientists.

I have listened to the alternative views on community boards, clicked through hundreds of links with discredited ‘scientists’ or wellness gurus talking about the efficacy of vitamin C and dog worming medication and I’ve thought: enough. I need to raise my voice. I need to be vocal, so that the many vaccine-hesitant in my community don’t become vaccine-resistant.

The only way out of endless rolling lockdowns is vaccination. We need to get to 80 per cent. Which means that my community needs people who are prepared to step up and be vocal about vaccination.

I knew I would upset people.

I knew it would make me a target on social media.

So I wrote opinion pieces in my local paper. I asked people to wear masks. I posted a photo of me being vaccinated on my socials. I have spoken on the issue nationally in newspapers, on radio and on TV. I’m known here as publicly pro-vaccination.

I could have said nothing. In my community, I'm well known, and well loved. I’ve always been able to cross the divide. But sometimes you have to tough it out and take a position.

It’s the worst thing politicians do - court public approval by not being transparent. I'm currently the Greens candidate for the federal seat of Richmond. I knew by speaking up that I would alienate some members of the community who think we’re being sucked into a global conspiracy to be micro-chipped by Bill Gates. Or who are genuinely distrustful of the vaccine. I knew it would probably lose me some friends. And some votes. But I’d rather lose a few votes and in the end save lives. And I guess real friends need to decide if this issue is a deal-breaker.

I felt that if I was going to be asking for my community to believe in me as a leader, I had to show leadership. Standing up for your beliefs is scary. We all love to be liked. Putting yourself out there for abuse comes at a personal cost. 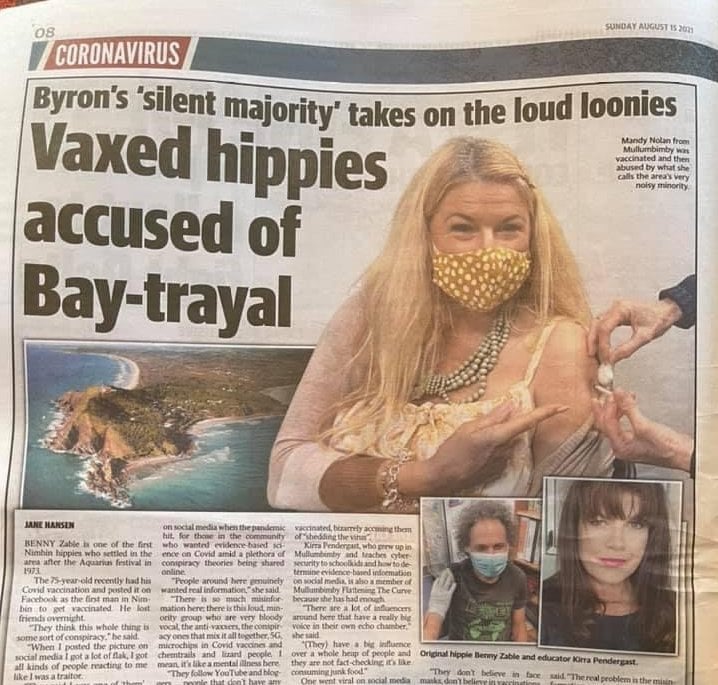 I have been trolled for my views on vaccination. I’ve had litigious things said about me. A friend posted, ‘I am so disappointed in you’. Yeah, that hurt. It was hard not to say something mean back. But I drew on my hippy roots and decided compassion was a better response. I breathed out, I let go. And then I just decided not to read it.

Someone wrote to my local paper and accused me of ‘hate speech’. Some have said I am a ‘useful idiot’. I think that means I’m working for Big Pharma. I want to respond that I'm an entertainer who has lost all her work. I have $3.50 in the bank. Big Pharma aren’t paying me very well.

There’s a natural reaction to want to defend yourself. To enter into long debates where you just won’t win. It drags you down the rabbit hole, too. So I keep my cool. You see, I’ve decided to be anti-vex. I won’t get angry. I won’t target individuals with abuse. I won’t denigrate or defame people whose ideas I see as dangerous and without evidence. I will talk to the ideas, not the people.

Yes, being pro-vaccination makes me the target of some hate. But it's also opened up the floodgates to a whole lot of support.

It’s how I know that speaking out is worth it. When I walk the streets of my town, people I don’t know thank me for speaking up. I have had phone calls and messages from strangers who tell me they don’t want to make themselves targets by going public, but they are right behind me. One woman wrote to the paper under a false name and suggested a statue of me be erected in the middle of town. While it's flattering, I can just imagine the joy it would give my haters - at least they’d have something to lob tomatoes at.

So I am going to keep being public about why we need to vaccinate.

We have a higher ageing population than most. Many of us are creatives or we are reliant on tourism. Many work across the border. We need to get on top of COVID – to end the lockdowns, and to keep our population well. In the US, it’s the unvaccinated who are dying.

I got vaccinated and I was loud about it so others will do the same. I made a choice for me, but also a choice for my community. My decision to vaccinate is to protect the vulnerable.

And when I see those who believe conspiracy theories, those who are trolling me, hating me, calling me a 'sheeple' and a 'sell out', I realise they, too, are vulnerable.

I vaccinate to protect them as well.

I have learnt that being compassionate is harder than it looks. But it’s so much better than the alternative.

Mandy Nolan is a comedian, mother of five, Mamamia writer and now Greens candidate for Richmond, the third most winnable seat for the Greens at the next Federal Election. For more from Mandy, you can follow her on Instagram.

A
anonymous 9 months ago

Reply
Upvote
There is a line we have crossed that is very dangerous. The 'I can tell you what to do with your body' line. Women fought hard for that line to be cast out. Now, because we are all terrified, we have so easily allowed the line to reemerge.  'Do this with your body - now!'   We can't have it both ways.
There will always be people whose approach to health is different, in a free, democratic society. I am fully vaxxed as I feel we are currently given no choice. But if someone else wants to take their chances with this virus, what am I going to do, hold them down and force-vaccinate them? Then what comes next?
We waste so much energy being angry at the moment when we don't have that energy to spare. Just do you, and I'll do me. Let's agree to be compassionate humans who can admit they don't have all the answers. No matter what 'side' we are on, there is one thing we all have in common. We can be courageous.
M
mamamia-user-482898552 9 months ago

Reply
Upvote
1 upvotes
@anonymous If someone doesn't want to be vaccinated, when they get sick, they can go to a hospital that is staffed by expert people who "did their research" on the internet. They can reap what they sow.
A
amy 9 months ago

Reply
Upvote
3 upvotes
@anonymous No, we can't tell other people what to do with their bodies. But when their choices put other people at risk, we can certainly judge them for their selfishness.
When unvaccinated people overfill the ICUs, they are not only hurting themselves, but anyone else who happens to have a car accident or other serious illness.
C
cat 9 months ago

Reply
Upvote
1 upvotes
@anonymous theres a massive difference between pregnancy and sexual consent vs  public health measures. Vaccination is about allowing the most vulnerable in our society to live . A society that protects the vulnerable  is exactly what women have fought so hard for.
C
cat 9 months ago

Reply
Upvote
1 upvotes
@amy not to mention their children, who they will deny vaccination to, and may end up as casualties of this virus through their parent's choice.
M
mamamia-user-391653937 9 months ago