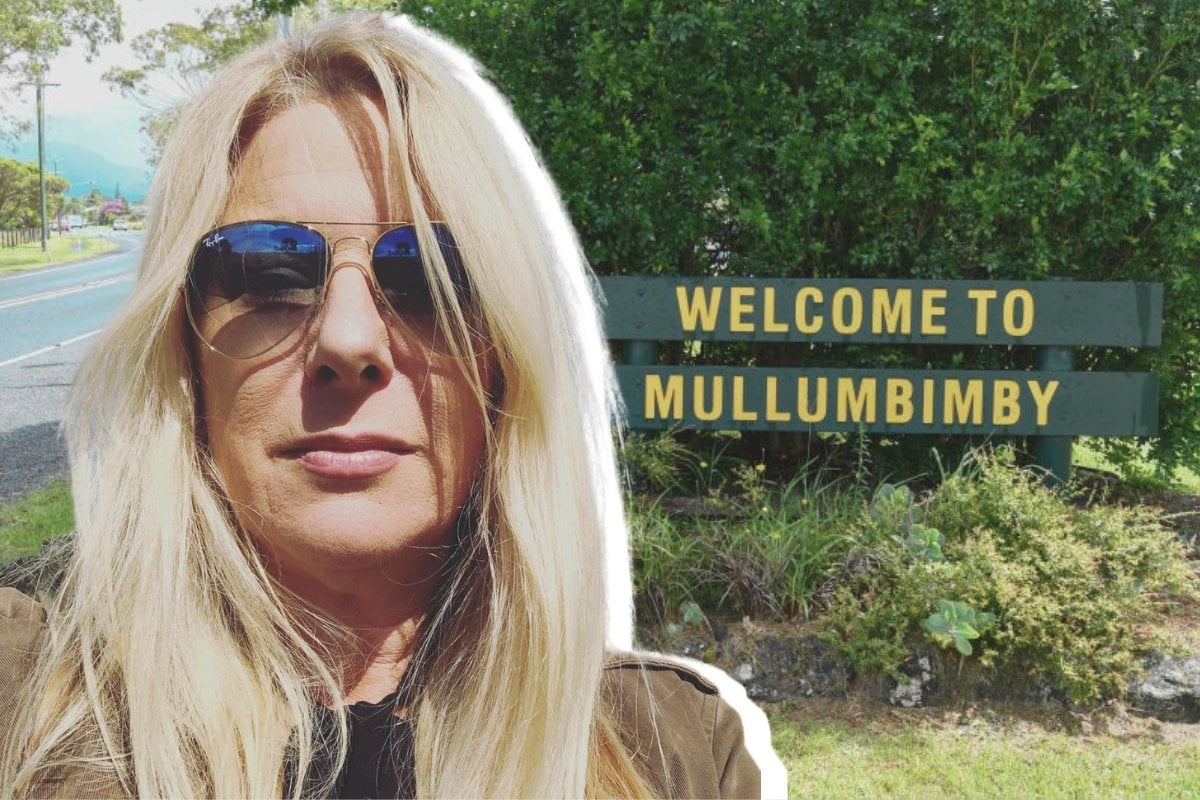 For me, there is no greater sense of home than the drive into Mullumbimby.

I face the mountain, she shows herself to me, and then on my approach she slips away, and then she’s back - like Mother Earth playing peek-a-boo. This hide and reveal is a portent of the magic of a community that can’t be easily articulated. A community of diverse opinions that manage to live harmoniously together.

Side note: Everything that's happening in Sydney right now. Post continues below.

Covid has ripped our rainbow flag in two. Our beliefs have been polarised to such an extent that there no longer is a middle ground. Our tolerance of each other has faded. Our mountain has gone.

I realised walking the beach this morning how deeply this has affected me. I feel this overwhelming grief – like something I have loved has broken. There is a disharmony in my community I have never felt before.

I see it when a man in his seventies screams at a 16-year-old retail assistant about his sovereign rights not to wear a mask or QR code in. When a mask-wearing midwife is yelled at for being a sheep outside the IGA. And when I can no longer go to the café I have frequented for the past 15 years because the staff aren’t wearing masks and are playing know your rights anti-mask material rather than music.

When did we start trying to indoctrinate each other?

A chasm has opened up and we stand on two sides, those who believe we are in a worldwide pandemic and those that believe it is a conspiracy.

Read more: How to have a conversation with someone who is vaccine hesitant.

I have seen the videos, watched the links, sat silently on chat groups in disbelief. I sit in horror and wonder about the most frightening conspiracy of all. Narratives are born and curated on social media. Thanks to the internet we can now create cults without compounds.

Who makes these videos? Whose interest does this narrative serve? Do those that watch know it’s the far right’s play to exploit the pandemic and fear of vaccination as an attempt to promote extremist ideology?

There has been a disturbing evangelism amongst those who feel they have found ‘the truth’ – that Bill Gates is the architect of a 5G micro-chipping de-populating future of artificial intelligence, where martial law will ensure we are all vaccinated (chipped) otherwise they’ll come door-knocking to take our kids. Or something along those lines.

It sounds like the script for a florid psychosis. Except this psychosis is socially activated. It is spread with the same contagion as the virus with social media as the vector. Like Covid, it also affects the vulnerable, and it can be fatal. I am left wondering, do we still care about the same things?

How can this eclipse climate justice, or Black deaths in custody, or the rape and murder of women?

I don’t understand the outrage against masks, when there is so little about true loss of life and liberty. Wearing a mask is not the same as dying in custody.

How do we find the middle ground where there is none?

Extremist ideology offers no space for challenge, no space for conversation. Science is the enemy. Any suggestion that information has been discredited is met with the belief that it’s all part of the corruption of the ‘truth’ by the mainstream.

It is a circular logic with no way in.

The people who prescribe to this narrative, are not strangers. Some are friends. People I love. I receive their links and YouTube clips and open them in sadness. I can’t respond. I feel despair. Forget the YouTube forecasts of world domination, the worst is already happening. The crazy right already has so many hostage and we can’t do a f**king thing.

In writing this I’ll be called a sheep or accused of not being a critical thinker. It’s what cults do. They stay inside a circular logic that disallows questioning.

It makes me sad that so many are in true fear. That this far-fetched dystopian nightmare is what some now see as a reality. It is the end of world doomsday ideology that comes knocking on your social media door to raise the alarm.

When I walk the streets of my town I feel this. I feel the divide. I watch the masked mingle with the medically exempt.

There’s an unspoken agitation. A sense of Them and Us. My town is no longer a place of love and acceptance. It is not a place of compassion and kindness. There’s an undercurrent of distrust, suspicion and violence.

We are being taken.

I find myself nostalgic for the community we had during the bushfires. When we didn’t need to have our house on fire to know that others were at risk. When we acted in the interests of others. When we worked together, when as a community we showed who we were. There was no conspiracy that divided us. We stood together, here at the base of our mountain.

This post originally appeared on The Authentic You - Masterclass Facebook and has been republished with full permission.

Mandy Nolan is a comedian, mother of 5, Mamamia writer and now Greens candidate for Richmond, the third most winnable seat for the Greens at the next Federal Election.

Reply
Upvote
1 upvotes
Thanks for writing this, it is so true that Covid has brought conspiracy theories to life. People show their anxiety in many different ways, and for some people, the pandemic anxiety has brought out an anti-authoritarian distrust of science and medicine, fuelled by misinformation.  Thank goodness you are in the country and not near a major airport and population centre.
B
beachhouse84 10 months ago