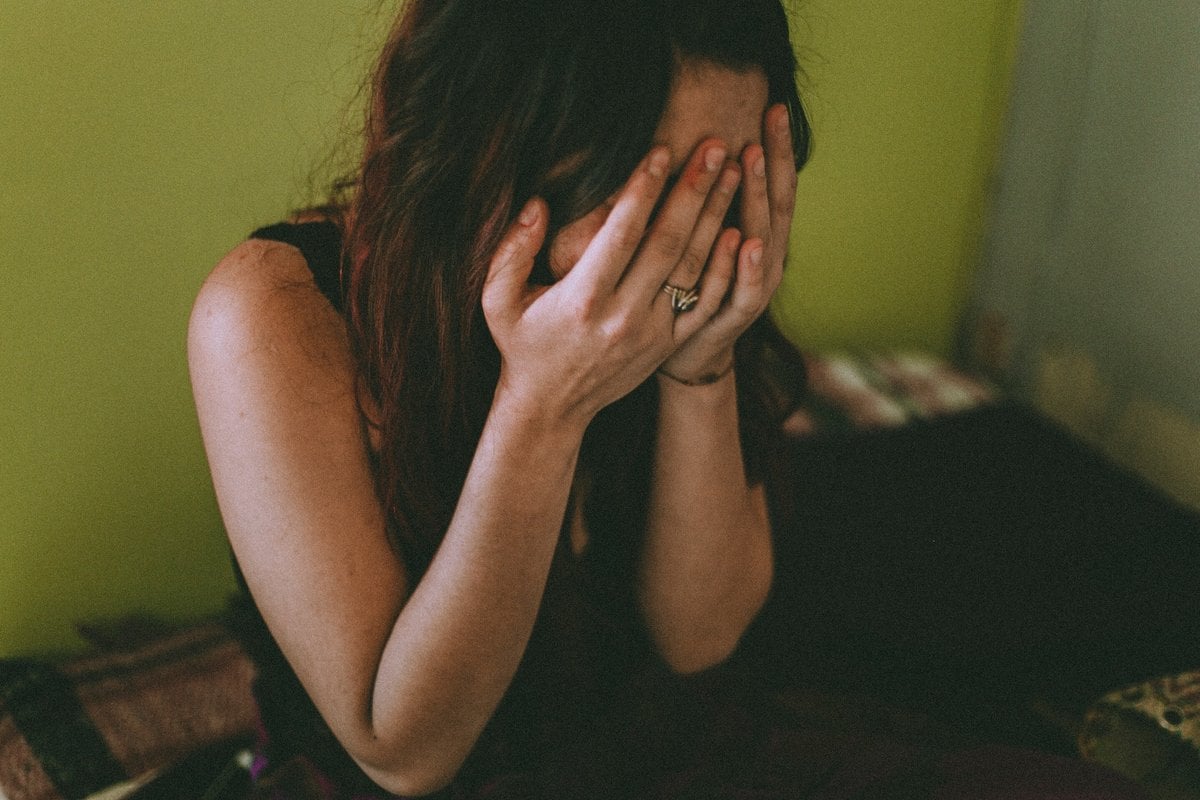 This story deals with pregnancy loss and could be triggering for some readers.

My boyfriend was finally sober and serious about staying that way. We were tentatively back together, but trying to do it "healthily" - you know, give each other space, keep our own interests, etc. On impulse, we booked some cheap flights and went on holiday.

It was a wonderful trip - full of laughter, crystal clear warm waters, snorkeling and diving, and… amazing holiday sex.

Before we left, I’d looked into getting my eggs frozen. I knew my chances of getting pregnant reduced by half the minute I hit 42. Now I was 42 and 43 was barreling towards me like a runaway train. A runaway Bullet Train with a biological time-bomb strapped to its undercarriage - every menstrual cycle another second to countdown.

Watch: Tina Arena speaks to Mia Freedman about her miscarriage. Post continues below.

I also knew that the “honey, we need to have kids. NOW”, talk wasn’t a good idea with someone newly sober. Talk about pressure. So I thought maybe freezing some eggs might buy us some time while he got sober and I saved some money.

The good news was that apparently my hormone levels were good. The bad news was that I might have a Uterine polyp or something. Along with my irregular cycle, family history and general paranoia about getting pregnant in my 20s, it wasn’t a surprise that despite some efforts with my second husband, I’d never been pregnant before.

As with every holiday, coming back is a bit of a downer. Especially when everything’s on lockdown. I noticed in the afternoons, I was feeling super tired. Like could barely stand up kind of tired. And there was this one time in the kitchen, I suddenly got a bit dizzy. I put it down to stress/depression/fatigue/lack of food/pandemic syndrome and tried to soldier on as best I could. I actually started taking naps - something I’d never done before.

The afternoon before my ultrasound, I went to pick up some prescription painkillers to take before the procedure. The pharmacist handed me two extra pills. Mifepristone.

“It makes your uterus contract and empty out. They want to make sure it’s empty.”

I suddenly realised I hadn’t had my period for a while. Not unusual since my cycle is usually unusual. But it was unusually unusual to be this late.

So I did. I went home and peed on a stick. Two sticks.

It’s really weird to be 43 years of age and fail a pregnancy test for the first time. Twice. It’s even weirder when you didn’t think it was possible.

I didn’t take the Mifepristone (or the painkillers). They gave me an ordinary ultrasound and there it was - this little blastocyst of cells. I was five weeks and two days.

"Do you want to keep it honey?"

Normally, I’d be outraged at being called “honey” at 43 years of age, but I was still in shock.

There was a long list of the increased risks and birth defects of a "geriatric" pregnancy.

I laughed it off. Like I laugh everything off. Like when they told me the issue with egg freezing at my age is that the quality of the eggs goes down as you’re older.

I made the same joke to the doctor. His lip barely twitched. Tough crowd.

I went home and planned how I was going to tell my boyfriend. Given our history and the fact we'd recently been 'on a break', I didn’t want the first question to be, "who’s the father?"

So I circumnavigated it by getting a "Top Dad" shirt and "#1 Dad" cap off Amazon, put my pee-sticks in a sandwich bag and gift wrapped them. Then I showered and put on make-up.

The more I thought about this baby, the more excited I got. Someone to read stories to at bedtime. Someone who sees the world with fresh eyes. Gets excited about small things. I’m sure the first, second (and possibly 18) years would be hell, but after that…

By the time I got out of the shower, I’d got it all figured out.

All except one thing.

Now my boyfriend, like me, can be very selfish and stubborn sometimes (it comes with the being an addict/alcoholic territory). But he’s also sweet, caring and fun. That said, he can be a little bit erratic at times (it’s an early sobriety thing). In short, I had no idea how he would react.

When he opened the gifts, he was stunned. There was a long pause as he processed.

I braced myself for him to run screaming for the door…

When he said, "I guess I’ll go back to work and stay sober then," I felt this intense rush of love for him. Oh my God, I thought. We might actually have a chance here.

He told his close friends. I told some of mine. I still went running. I avoided larger groups.

To the small circle I told, I downplayed it: I’m only seven weeks. There’s a 40 per cent chance of miscarriage. Let’s not get too excited here.

I acted flippant. I went surfing with some friends in freezing 50 degree water.

I constantly reminded my boyfriend of the odds. I didn’t want to get our hopes up. But I ordered "What to Expect When You’re Expecting" and we flipped through it.

"It’s the size of a raspberry!" he exclaimed.

I didn’t want to admit it, but this raspberry was becoming less of a raspberry and more of a baby. We started to talk about future plans. We'd move in together. I’d keep writing. He’d do construction. We’d have a garden. And a dog. And a spare room for visitors.

I was thinking about family values. What would we teach them about religion? Our kid was going to read a lot. Not too much TV. Certainly no TV while eating dinner.

On our third ultrasound, I was so excited. There it is! I exclaimed as this little tadpole swam into view on the monitor. I held up my phone so my boyfriend on FaceTime could see (he wasn’t allowed in the room because of COVID).

We held our breath. She flipped a switch. Silence. No swoosh, swoosh, swooshes like the last time. She measured the tadpole. Seven weeks, two days. I should have been eight and five.

She handed me a tablet to swallow and sent me home with four Mifepristones to insert the next day. She warned me the pain would be like really bad cramping. I knew about bad cramping. My periods were so horrendous they had taken me to emergency a couple of times. I knew what she meant, I thought…

On the way home, we bought snacks and I took a work call. The day was so normal but not normal. When we got to my house, we lay in bed and slept all day. It was like we both shut down.

The next day, I inserted the pills. When the cramps hit, the scale of pain was indescribable. The doctor had tried to explain essentially that the body is going into a "mini labour". I hadn’t really understood that at the time. If this is what labour feels like, then every TV show or movie I’ve seen that portrays it, drastically downplays it. I guess if it was accurate every movie would automatically be re-classified as "horror".

I rolled on the bed in agony, crying. I’m not a crybaby generally. I like to think I have a good pain tolerance. This was something else. My boyfriend watched helpless, shoving chips into his mouth (eating all our feelings). Eventually, he drove me to the hospital.

As he wheeled me in, the cramps started to ease. They hooked me up to some morphine. "A free high," I joked. I kept the jokes coming. The nurse told me I was the funniest patient she’d had all week.

The emergency doctor prodded at my uterus. She reached in with forceps and pulled out a small lump of bloody tissue and put it on the tray. I stared at it. This tiny bloody mass barely bigger than a raspberry. This thing that caused me constant fatigue and nausea and dizziness that might have been a human one day. So weird how something so small can make an impact so big in such little time. I was in awe. I snapped a photo of it. I needed it to feel real.

They charged me $300, gave me painkillers and sent me home. It’s been almost three weeks now. I’m still bleeding a bit - apparently this is normal.

There’s this weird thing about miscarriages - a silence. A sense of loss that’s difficult to express.

You don’t tell many people until you’re 12 weeks, because that’s when it’s “safe”. So you carry these hopes and dreams silently inside. I had to distance myself from a lot of friends and acquaintances - because it’s hard for me not to be open (and also, COVID).

Then there’s this sense of shame. What did I do wrong? Did I drink too much caffeine? Was it the surf in the freezing water? But I’m healthy, I argue with the judges in my head. I don’t drink, drug or smoke!

There’s also this kind of sadness. I’m familiar with loss and grief. This is different. This is a loss unshared and unspoken. It’s much lonelier. I know in a sense that my boyfriend feels it too. But my grief comes with hormone imbalances, cramps and bloody forceps.

For three weeks, I was a mother, trying to raise a happy, balanced kid. A kid who would have everything they needed in order to thrive. A kid with an active imagination, a bright future, who didn’t spend too much time in front of the TV.

For three weeks, I had a raspberry-shaped baby.

Now I don’t. And what’s really sad is how very few people know about it.

I hope next time my raspberry will grow into a real human. I’d like to try being a Mum.

Reply
Upvote
I had two miscarriages in a row when I was 39.  I can vividly remember how solemn the ultrasound doctor sounded when he told us that the fetus was not viable. The aftermath was months of sorrow and depression. I don't think anyone understood what I was going through. Some people close to me hurt me with vicious and ignorant comments. Finally at the age of 40, I gave birth to my youngest child. I had another miscarriage two years later. My now second ex husband was revolting to me.
Keep trying. I wish you the best.
News
General
Opinion
True Crime
Politics
Sport
Explainer
Entertainment
Celebrity
Reality TV
Movies
TV
Books
Rogue
Royal
Lifestyle
Beauty
Fashion
Weddings
Home
Wellness
Health
Fitness
Travel
Food
Parents
Before The Bump
Pregnancy
Baby
Kids
Teens
School
Parent Opinion
Work & Money
Money
Finance
Career
Lady Startup
Relationships
Sex
Dating
Separation
Friendship
Family
Real Life
Couples