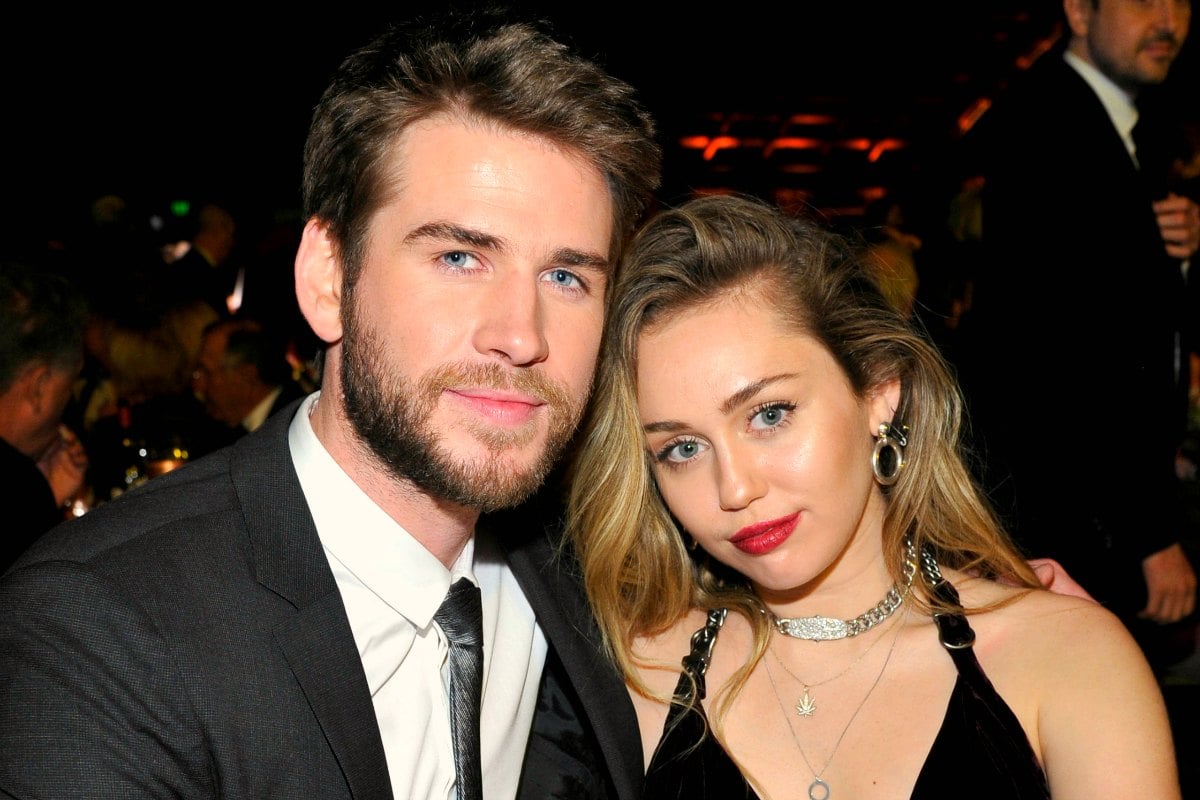 1. Apparently Liam Hemsworth learned about his split from Miley Cyrus on social media.

It’s been just over a month since we first heard the news that Liam and Miley’s marriage of less than a year had come to an end.

And while the news came as a shock to us, apparently it also caught Liam off guard too.

On August 10, Miley’s reps released a statement to People reading, “Liam and Miley have agreed to separate at this time. Ever-evolving, changing as partners and individuals, they have decided this is what’s best while they both focus on themselves and careers.”

But according to Page Six, Liam was “blindsided” by the statement.

An anonymous source told the publication that while the couple had been separated for months,  it was supposedly news to Liam who was in Australia at the time.

A few days after images of Miley kissing Kaitlynn Carter were released, Liam finally took took to Instagram to confirm the break up.

“Hi all. Just a quick note to say that Miley and I have recently separated and I wish her nothing but health and happiness going forward,” the caption read.

Hi all Just a quick note to say that Miley and I have recently separated and I wish her nothing but health and happiness going forward. This is a private matter and I have not made, nor will I be making, any comments to any journalists or media outlets. Any reported quotes attributed to me are false. Peace and Love.

Honestly, who knows if Liam really knew nothing about his break up, or if this is just one of the many fascinating rumours going around about the celebrity couple. ¯\_(ツ)_/¯

2. It turns out The Bachelor rose ceremonies are filmed in a garage and we’re… confused.

If you thought The Bachelor was all glamour and floating candles, you’re in for a rude shock.

You see, the reporters at Daily Mail have uncovered the truth behind the luxe looking rose ceremonies. They are filmed in a… garage.

To be specific, the garage of the $3.5 million dollar Sydney mansion where bachelor contestants live and lounge until they’re sent home.

According to the publication, the garage is turned into the rose ceremony room before each season of The Bachelor and The Bachelorette, and we only see a small portion of said garage on TV.

When it’s not being used for breaking hearts, the garage doubles as a production storage area and hair and makeup room.

In hindsight, the rose ceremony room being a garage makes perfect sense because it’s so conveniently close to the limos that whisk the eliminated contestants out of the bachelor’s life.

Ah, the magic of TV, right?

3. “I was broken.” Danni Minogue on her four-year stint on The X Factor.

During Danni Minogue’s stint as a judge on the UK version of The X Factor from 2007 to 2011, it was well-televised that she struggled with the big personalities of the other judges.

In 2008, the performer got into a live argument with fellow judge, Louis Walsh, leading her to ‘break down’ on air, but the biggest controversy was her ‘feud’ with Sharon Osbourne, who was replaced by UK singer Cheryl Cole in 2008.

Reflecting on the tumultuous period of her career in an interview with the Herald Sun, the 47-year-old said she was “broken”.

“I am very strong, very resilient and I know who I am. But there comes a point where you have to say, ‘No, too much’”

“I get that it is a TV show – it is entertainment [and] there is quite a game involved with the business but you have to be fair and it just got to the point where I was so unhappy.”

Minogue is currently promoting her autobiography, Dannii: My Story, in which she writes in depth about her relationship with Osbourne, as well as her career and her high-profile divorce with Julian McMahon, who is an actor, model and son of former Prime Minister of Australia, Sir William McMahon.

The mum-of-one is currently one of the judges on Channel 10’s The Masked Singer, alongside Dave Hughes, Lindsay Logan and Jackie O, which premieres next Monday September 23.

Miles is a man who does not like his life very much. He hates his job, is constantly on the ropes with his wife, and is an all-round downer. So, he one day undergoes a treatment to “rebuild his DNA” at a questionably looking Top Happy Spa under the pretence that it’ll make him the “best he can be”. Instead, he realises he’s been cloned into a newly improved version of himself, with the old Miles literally left for dead, buried in a grave.

Things get really weird when the old Miles Elliott comes back from the dead, meets the new Miles Elliot, and promptly hatches a plan to kill him.

You can watch the trailer here:

Alas, as far as we’re concerned, two Paul Rudds are better than one.

Living With Yourself will available to stream on Netflix from October 18.

5. Luke Toki was voted off Survivor last night. Fans have already raised $190,000 for him.

Actress and Survivor contestant Pia Miranda was left with the heart-wrenching deciding vote, that ultimately saw her write down Luke’s name during Tribal Council – denying him the $500,000 prize money that is awarded to the winner. A nation in mourning, fans of the Channel 10 show have set up a GoFundMe page for Luke to raise the prize money equivalent.

Luke’s reasoning for being a contestant on the show was powerful.

When he left for Fiji, he was leaving his wife at home with their three kids, including their six-week-old daughter born with cystic fibrosis.

“I’m definitely here to win it for my family. I’ve sacrificed a lot to be out here this time… my daughter was six weeks old [when I left for Fiji],” he said during the season.

“She’s been diagnosed with cystic fibrosis, so it was worst-case scenario for me, leaving. I’m definitely here for the money because obviously, the money will help my family – every move I make in this game is super critical.”