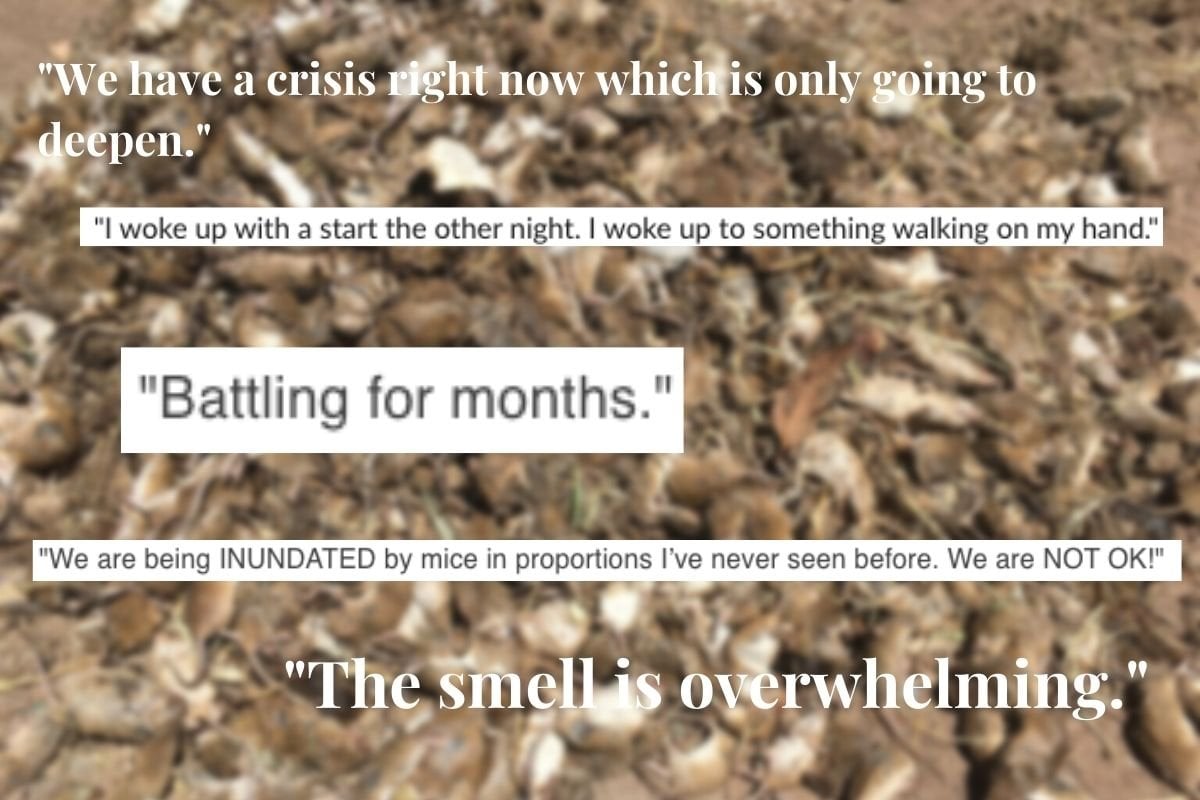 There are millions of them.

They're destroying crops, gnawing their way through months of cafe and supermarket stocks, and inundating homes, hospitals and hotels right across inland eastern Australia.

Mice infestations are a natural occurrence in this country, but what we're experiencing right now is different and our country friends are not okay.

For those of us creeped out by one mouse (*shudders*), this is literally the stuff of nightmares.

Watch: This was filmed on a farm near Gilgandra. Post continues after video.

It's been described as a plague of "biblical proportions" or a "carpet" of mice. It's the worst infestation we've seen in Australia in decades - and it's been going on for almost a year.

They emerged after a bumper grain harvest and have been leaving a trail of destruction since July 2020 in some regions, with the recent deluges of rain sending them indoors in even larger numbers.

The smell is unbearable, they breed at unprecedented rates and locals are finding them in their beds and running through their walls and ceilings.

Mice start breeding at six weeks old and can have a litter every 21 days. Local media has crunched the numbers and calculated that a pair of mice can produce up to 500 offspring in a season. Terrifying.

A demand for rodent traps has seen stock practically fly off the shelves - with customers sharing photos of empty Bunnings stores across the NSW Central West, one of the hardest hit areas.

Farmers have been left with damage bills in the hundreds of thousands.

Adam Macrae told Landline, mice have destroyed 1500 of his hay and straw bales since arriving on his Coonamble farm. But it's not just the immediate economic loss - those bales were invaluable insurance against the next drought.

"We were killing lots of mice, but you know it seemed that for every one that died, 10 more were coming in for the funeral," he told the program.

As TV producer Chezzi Denyer, who lives with her husband Grant Denyer and three daughters in Bathurst, NSW, wrote on Instagram in March, "We are NOT OK! Alright, so I’m kinda joking.. kinda not.. but you still need to check in on your friends who live in the bush.

"We are being INUNDATED by mice in proportions I’ve never seen before. Last night I found my cooking thermometer had been eaten through (after I removed it from my roast pork), and this morning we’ve found a mouse nose/snout in our cutlery drawer.

A grocer in Gulargambone told the ABC they were catching between 400-600 mice a night.

Hospital patients have been bitten while being treated for non-mouse related reasons and there's been one report of a rare mouse-related illness known as lymphocytic choriomeningitis [LCM].

There are also reports of people being bitten in their own beds at home, with The Quicky's Claire Murphy telling Mamamia's podcast Mamamia Out Loud, "I woke up with a start the other night... I woke up to something walking on my hand. So I did the big fling and I jumped out of bed... I can only presume it was a mouse."

One woman in Albury wrote on social media that it "looked like the ground was moving" under her headlights, as she drove up to her house.

Locals have reported finding poisoned mice in their water tanks leading to fears of contamination and disease, with NSW Farmers president James Jackson telling DW "the mice situation is only getting worse."

It's bad. Really bad. And locals have been calling on the state and federal governments for months to offer some kind of rebate to help them control the problem.

"The mouse plague crisis is escalating by the day currently, and is quickly moving from an economic disaster - hard enough to stomach for the producers who have started to emerge from years of drought - to a public health crisis in many rural and regional communities," wrote Country Women's Association (CWA) of NSW president Stephanie Stanhope for The Land.

#Mice numbers are exploding in many parts of NSW. Haystacks are being destroyed, silos invaded, winter crop sowing is at risk and there is a human health impact. @NSWFarmers is calling for action👉https://t.co/c17hSFMiVG#nswfarmers #miceplague pic.twitter.com/2HH8YnnqJM

"I've been asking for assistance in meeting the cost of baits - and that's just not people on farms that's also people in town, in businesses, a lot of people are on limited or fixed incomes and the cost of keeping up the baiting is just crippling them financially," Roy Butler, Member for Barwon, told the ABC back in March.

On May 11, NSW Farmers and the CWA briefed New South Wales Parliament on the problem which they say has reached crisis level. But as Jenny Aitchison, the Member for Maitland, NSW, said, "not one Nationals member turned up to that briefing, and in Question Time today the NSW Deputy Premier refused to answer the question about what they would actually do to help people in regional, rural NSW dealing with this plague."

"The Deputy Premier confirmed today that the government is not doing anything to help them and the Nationals have just abandoned them," she added.

The NSW government has now responded with a $50 million assistance package to address the problem - with free baiting, through free-of-charge grain treatment, to be made available to primary producers. They also announced that affected households and small businesses would be able to apply for rebates up to $1000 to help them meet the cost of purchasing mouse baits.

A change of heart from Min for Ag. Today he announced $50m to deal with the mouse plague. Days ago he said the Gov didn’t need to throw money at the crisis. He then accused farmers of trying to pull a publicity stunt when they asked for help. This funding is too little too late. pic.twitter.com/WzxKVy3Ua6

"I am also forming an advisory committee to ensure everyone has access to expert advice – including the latest hot spots, health and food safety advice, information for vets and guidance for keeping children and animals safe," said Deputy Premier John Barilaro.

We welcome govt support but the #mouseplague crisis is far from over.

“This assistance package will provide some relief...We are now hopeful the Government will continue to monitor the crisis and be able to act with further measures as the need arises" https://t.co/qZBzdlrhVc pic.twitter.com/ACf9kbeZQV

The NSW government has also flagged the use of the world’s strongest mouse poison, bromadiolone, which kills in under 24 hours and is yet to be approved. But experts have warned that the pesticide will also have deadly consequences for wild animals and domestic pets if they ingest it.

"Because it is highly palatable, it can cause primary poisoning to animals that eat the dead or dying rodents and has been known to cause problems in a range of animals including domestic dogs, native mammals such as possums, and wetland and sea birds," warns ecologist Dr Maggie Watson.

Locals don't think the government is doing enough, and it's too little too late.

As Trundle Central School principal John Southon told Today Show this week, more needs to be done than simply supplying poison. In just one night, he caught 80 mice in traps in a single classroom.

"Surely there must be something we can do to reduce the impact of this - if this type of infestation was at Bondi, we would have massive amounts of resources being put out to try to get rid of these things.

"They just sap away your self-confidence and the way you feel about yourself because it's just constant - every day."

Reply
Upvote
2 upvotes
Mice and grasshoppers. Best thing to line the traps for mice is linseed oil - they can't get enough (you'll get 3-4 in one hit - and it won't harm birds, dogs or cats that may come across them

Reply
Upvote
@mamamia-user-893622181 what kind of traps? We use just the normal 'snappy' kind, the ones you put a piece of food in, do you use a different type for the linseed oil?

Reply
Upvote
1 upvotes
@rush nope the good old snappy kind! We had to trial a few to make sure it was a quick, clean death (one rat dragged a gentler drop 12m and back). You only need a few drops of the linseed. I literally dip a bit of wire in and dab it on the trap. Keep it in glass as they'll eat through plastic!

Reply
Upvote
1 upvotes
@mamamia-user-893622181 awesome, thanks for that! Definitely going to give that a try!

Reply
Upvote
2 upvotes
Jesus. Imagine what the flooding might be doing. Kill some mice, sure, but also forcing them to find higher ground...