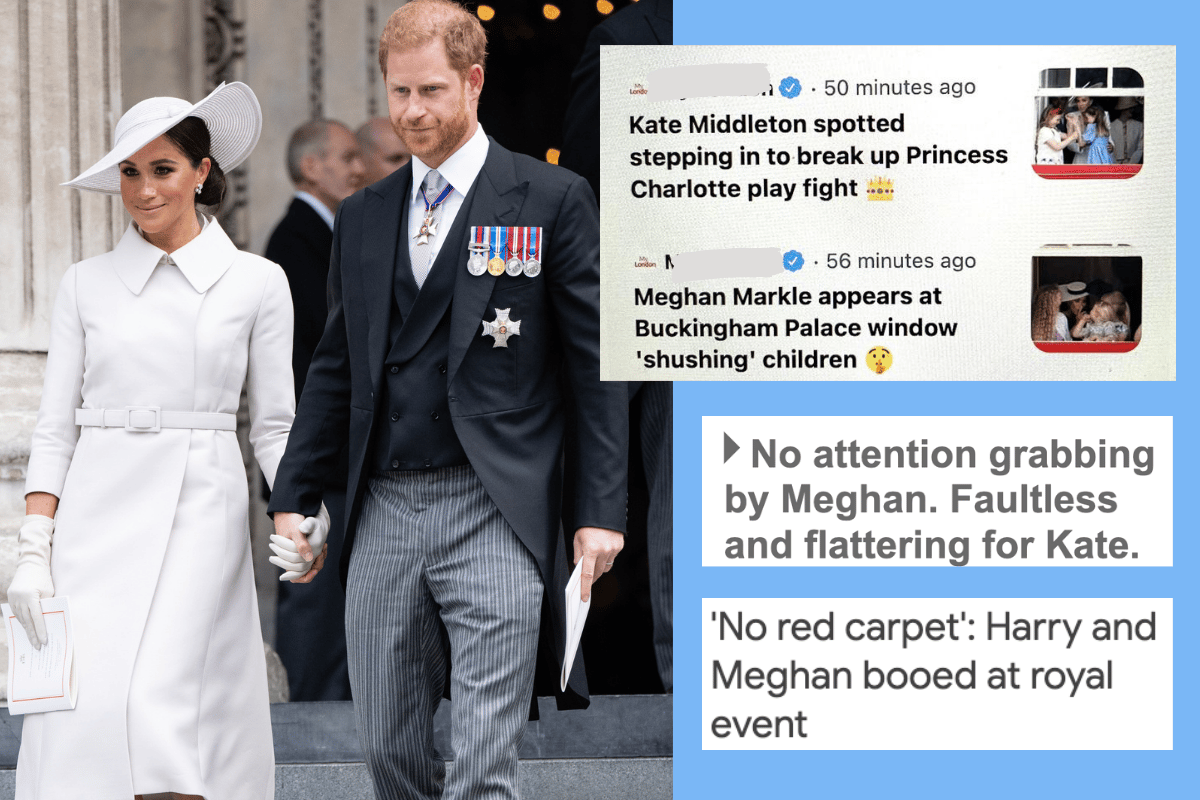 In March last year, the world watched on as Meghan Markle and Prince Harry detailed their gripes with the British royal family and the institution itself in a tell-all with Oprah Winfrey.

Meghan hinted that the Duchess of Cambridge, her sister-in-law Kate, had "leaked" a wedding rumour that Meghan had made Kate cry, when allegedly it was the opposite. She also told Oprah there were "concerns and conversations" in the palace about "how dark" Archie's skin would be.

Meghan also admitted that she reached a breaking point when the "institution" would not provide her with any kind of help. And Harry alluded to the fact that his relationship with his father and brother were significantly strained.

But the interview didn't do much to help the couple's reputation woes. If anything, it exacerbated it. Months later, it was confirmed via a news report that the online trolling of Meghan was far more targeted and coordinated than it appeared. She was even said to be "the most trolled person in the entire world".

As for not attending Prince Philip's funeral in 2021, they were also "dammed if they do, damned if they don't".

There has also been criticism as to why the couple still refer to themselves as "the Duke and Duchess of Sussex" given they're not active working members of the royal family. It left a bad taste in the mouths of some.

To top it all off, the couple were also widely panned in the new royal tell-all The Palace Papers: Inside the House of Windsor - the Truth and the Turmoil. In the book, it was suggested that Meghan had "hated every second" of her trip to Australia - the news not exactly winning her over many fans.

Simply put, Meghan Markle and Prince Harry have had a PR problem.

And now that they're back in Britain, the couple is experiencing the ultimate test - can they win back favour with the British public?

The Queen is currently celebrating her Platinum Jubilee, a recognition that she is the first British monarch to reach 70 years of service.

It's been a major event in the UK, with streets lined with Union Jack flags, crowds out in abundance and plenty of official royal appearances. And given it's a family affair, Harry and Meghan are in attendance.

Attracting the most attention and media coverage has certainly been Kate and Prince William's three kids.

There's understandably been a focus given their presence at the National Service of Thanksgiving at St Paul's Cathedral was the couple's first 'royal' appearance in over two years. But unsurprisingly, it's been taken to the next level.

One body language expert suggested Harry was "anxious" about being perceived as a "royal B-lister" for not sitting in the front row of the cathedral.

A fashion commentator claimed Meghan's dress was "not attention-grabbing" in comparison to Kate's "faultless and flattering" outfit.

A royal biographer accused Meghan of trying to "promote herself" by coming to the Jubilee, instead of "saying sorry to the Duchess of Cambridge".

Can you sense a pattern here? 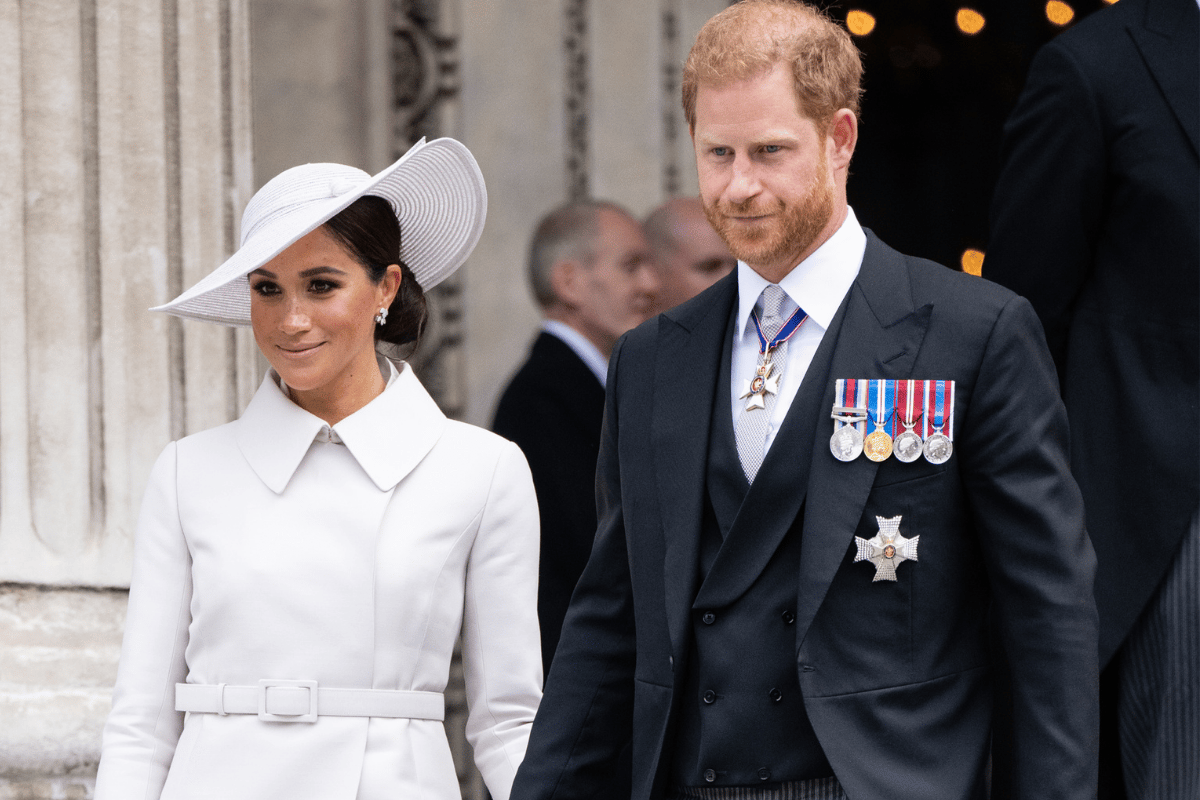 Meghan and Harry at the Queen's Jubilee. Image: Getty.

One of the most interesting takeaways is the relationship between Meghan and Kate, with many commentators still intent on pitting two grown women against one another.

Meghan and Harry were seen playfully shushing and telling the little ones inside Buckingham Palace to be quiet ahead of the Trooping the Colour fly-past balcony event.

But the headlines and Twitter commentary around the image of this scene wasn't playful at all. One royalist wrote on Twitter, "So much irony in this picture of Meghan Markle telling anyone to be quiet when she can not even control her own mouth."

In comparison, Kate was praised for keeping the kids calm.

The headlines … hasn’t even been a minute and it’s Meghan vs Kate. #MeghanMarkle in the wrong ‘again’.#PlatinumJubilee #QueensJubilee pic.twitter.com/GeTTBB9OWU

This isn't the first time headlines surrounding the two women have had a blatant double standard.

Who could forget the comparison between Kate and Meghan's respective wedding bouquets - one was a "homegrown variety" of flowers suited to royalty, the other was "a risk to Princess Charlotte's health".

Both women had the same flower in their bouquets - Lily of the Valley.

Meghan and Harry also struggled to change the narrative at their National Service of Thanksgiving appearance, with footage from the New York Post and reports from The Daily Beast showing some of the crowds booing the pair as they left the service. They did however receive majority cheers, compared with Boris Johnson and his partner who respectively were booed completely.

Recent polls reflect this as well, with one poll suggesting only a third of Brits support Harry and less than a quarter hold a positive view of Meghan.

And in a study conducted by The Guardian, 43 per cent of headlines published about Meghan since 2018 were found to be negative in tone.

Meghan has managed to push back in some ways, especially thanks to her legal win against the British tabloid press. At the end of last year, she celebrated a legal victory over The Mail on Sunday for breaching her privacy.

But the impact of what's been said about Meghan still leaves a mark.

In 2019, she said the abuse she received was almost "unsurvivable".

"What was able to just be manufactured and churned out, it's almost unsurvivable," she said on the Teenager Therapy podcast.

"That's so big, you can't even think of what that feels like. Because I don't care if you're 15 or 25, if people are saying things about you that aren't true, what that does to your mental and emotional health is so damaging."

"In the nearly three years since this began, I have been patient in the face of deception, intimidation and calculated attacks," she said, reflecting on the legal win. "Tomorrow it could be you. These harmful practices don't happen once in a blue moon - they are a daily fail that divides us and we all deserve better."

So although Meghan and Harry's presence at the Queen's Platinum Jubilee is a step forward for them, it also comes at a cost. It's a stark reminder that reputations take forever to build but seconds to crumble.

For more on this topic, listen to Mamamia's episode of 'Cancelled' on Meghan Markle and Prince Harry.

Reply
Upvote
1 upvotes
They are likely to face an uphill battle because they broke the ‘never complain, never explain’ rule. If my sister in law trashed me on tv I probably wouldn’t have much to say to her either.  I reckon that people are still intrigued by them and so they continue to garner media interest which they also need in order to remain relevant to Netflix and Spotify.
M
mamamia-user-893622181 a month ago