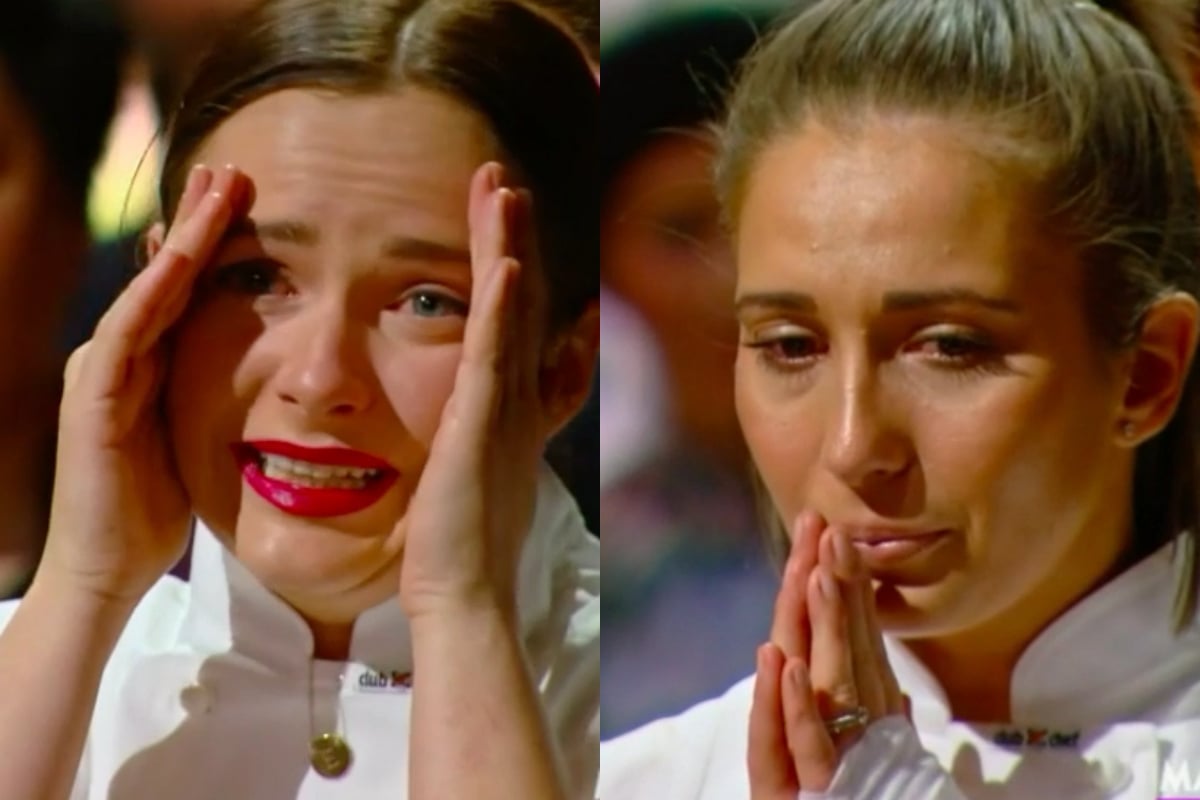 To catch up on all things MasterChef Australia 2020, make sure you check out our MasterChef hub. We’ve got you completely covered.﻿

Jock Zonfrillo is wearing a kilt.

1. He DID get my letters, and
2. This is a very important occasion.

We also know this because the Scotsman is clutching his worry beads, and because fellow judge Andy Allen is wearing a nifty lil' bowtie, and because Melissa Leong... well, looks like a walking Vogue spread (but hey, what's new). 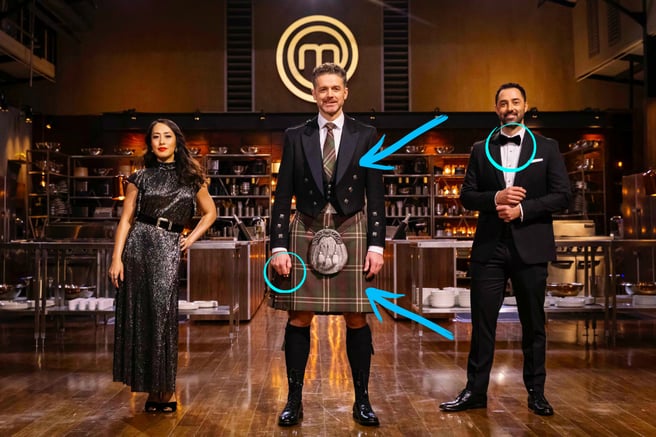 Clues that tonight's episode is a big deal. Image: Channel 10.

You came to experience two best mates, bonded by a mutual affinity for dough, being subjected to several hours of extreme stress as they produce food that several million viewers will mercilessly critique despite not being able to... actually taste it.

Oh, and also to relish once again in Reece's directional palm clapping.

We begin with finalists, Emelia Jackson and Laura Sharrad, bidding each other good luck, and almost sounding like they genuinely mean it.

Their usual generic aprons have been replaced with chef's whites, which again, is likely a reflection of the seriousness of the occasion. Or perhaps, the meagreness of Channel 10's laundry budget.

There's the cursory few minutes of group therapy, in which the pair reflect about that time they didn't win MasterChef but pursued their food dreams regardless (I also have food dreams, but they never involve a robust business plan... or cooking).

Then, finally, it's time for their service challenge: four hours, three courses, more than 60 plates of food.

Emelia, a self-described "little old cake maker", opts for a "seared scallop number", followed by beef short rib, and pistachio financier with Davidson plum. So, no cake at all.

Laura, meanwhile, leans on native Australian ingredients, of which Jock is famously fond. (If you listen carefully, you can almost hear the keyboard warriors flexing their fingers.)

She's doing seared bonito, which is reportedly a fish of some description, then pork, and artichoke ice-cream to finish. Which, frankly, sounds like a pregnancy craving, but sure.

﻿Ex-contestant, Dani Venn, says the dessert sounds "mind-blowing" but also that she doesn't understand what... it... is. And same.﻿

Both contestants seem to be under the impression that time speeds up in the MasterChef kitchen, in which case let's all go there and get this year over with.

As Laura ponders the dynamics of time, she asks for a "half-time Negroni", and now we're mulling over the virtues of MasterChef: Tipsy Edition.

Despite the fact her beef is being a stubborn cow and refusing to cook fast enough, Emelia declares she won't prep a back-up because she's "always hated Plan Bs". Which has Jock nibbling his worry beads and...

Laura grabs a hot pan with her bare hand, causing what seems to be a severe burn.

The next shot is the classic MasterChef flames-burst before the ad-break. 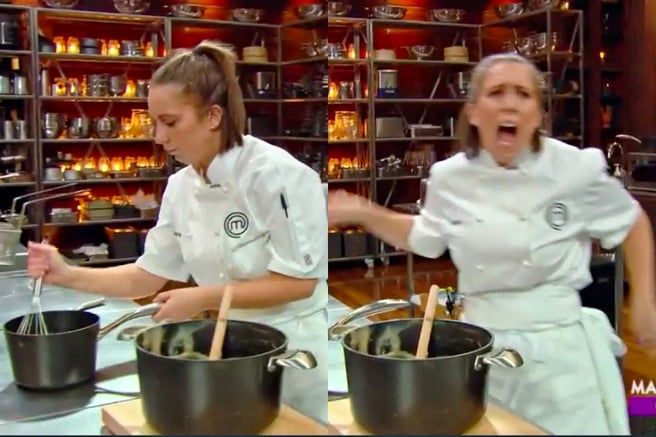 The lathe is back. As Emilia turns her apple, Reynold fights the overwhelming urge to shout swears about some bloke named Martin Benn.

All that lathing has clearly kept Emelia busy, because it seems she didn't clock the medical emergency that just unfolded about four metres away: "What happened, Lozzy?"

"Oh not much, pal. I just lost all the skin off my palm and am now cooking one-handed. But you know, journey something something."

The first dishes are served up, and as the judges critique them, Google search results spike for "what does astringency mean".

On to the mains.

Laura says something about "the weight of two pigs shoulders" having lifted off her, which seems like a rather eccentric unit of measurement until... yes, pork. That's right, she's cooking pork.

In a rather unsettling turn of events, it seems Andy knew the pig personally, because when he samples the dish, he uses singular nominative pronouns.

"She's got a good aroma... Let's see how she tastes," he mutters, as he shoves a piece of his apparent former acquaintance into his gob.

Clearly no one else is alarmed, because it's straight onto Emelia's ribs. 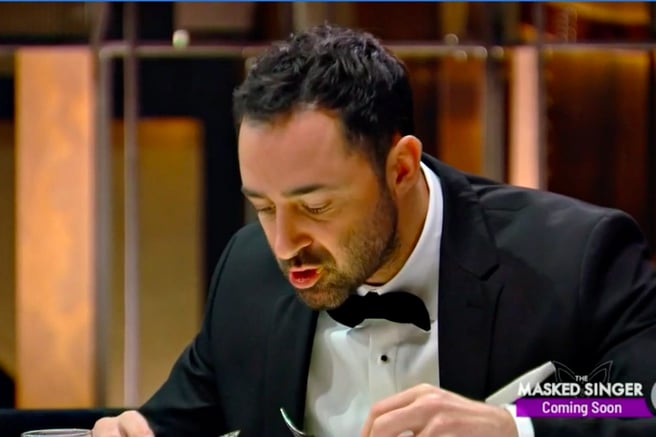 Show some respect, man. At least use her name before you eat her. Image: Channel 10.

It's neck and neck at this point, and Jock sagely points out that it will all come down to what they cook next.

It's all looking promising until an ominous beeping echoes above the dramatic orchestral music. LAURA AND HER ONE HAND HAVE LEFT THE GODDAMN FREEZER DOOR OPEN.

As a result, her artichoke gelato is "icy". Jock actually uses the word "sand". Andy, meanwhile, praises the artichoke dish for not tasting like artichoke, and despite its faults, they all agree it's a pretty decent dish.

But Emelia is the dessert queen.

And, yep, she's nailed it. Can we cut to the results now?

After 15 weeks, 61 episodes, and several dozen pairs of Melissa Leong statement earrings, the winner of MasterChef 2020 Back to Win is....

She jumps up and down, cries, and asks if they're serious, and Jesus Christ can you imagine if they said, 'Umm, no'.

But it's fine, you guys.

After comforting a seriously gutted Laura, Emelia holds the shiny gold plate aloft, beaming, as the socially distanced onlookers remind themselves to stay put and channel their enthusiasm into clapping. (This is Reece's moment.)

There may not be the usual celebratory group hug, but as the last flecks of confetti fall over the kitchen (and a sighing production intern readies his broom), the judges ready themselves for some particularly meaningful elbow bumps.

And with that, it's a wrap on MasterChef Australia 2020: Year of the Hibachi.

Tune in next year to see a triumphant resurgence of the jaffle iron.