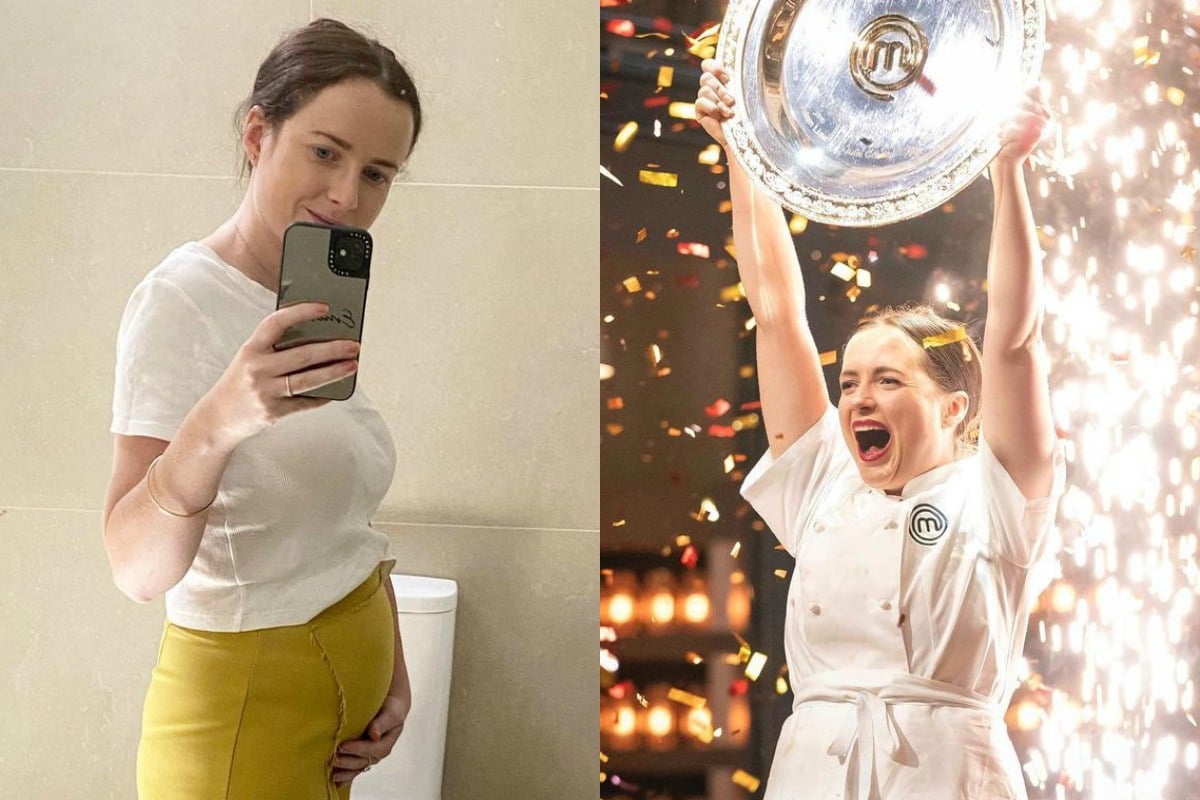 The 31-year-old shared the exciting news on Instagram, alongside a photo of her growing baby bump.

"Excuse the toilet in the background but this baby is popping today... Sous chef coming in June," she captioned the post.

And of course, her fellow MasterChef castmates were quick to congratulate her on the news.

Emelia is currently in a relationship with her partner Craig Gersbach, who's she's been dating for the past three years. However, the pair have kept their relationship relatively private, with Emelia only sharing a few photos of them together on Instagram.

Earlier this year, Emelia told Mamamia that Craig supported her during the MasterChef competition by giving her daily pep talks over the phone.

"This is going to sound funny, but he'd started watching the Michael Jordan documentary, The Last Dance. And every day, he'd call me in the morning and give me these pep talks. It was like I was going into battle," she laughed.

"It's just amazing how positive thinking really works. I never thought it worked before, but my whole thought process changed. I [used to] go into every challenge thinking, 'Don't do the worst today,' and that became, 'Win this challenge. Do the best.'"

It seems the positive thinking paid off because Emelia went on to win the competition, beating out her long-time friend Laura Sharrad.

"It was really bittersweet," Emelia told Mamamia of her win. "There was a range of emotions to navigate. I was so excited and just felt over the moon to have won, as you would expect. But then that was matched with instant heartbreak for Loz, because the competition meant so much to her. She put her heart and soul into it."

The friends first met when they were kids in primary school.

"I'm five years younger than Mils, but my first memory of her is in the school playground."

The pair also agreed they wouldn't let the competition ruin their friendship.

"I think it's so important to have a friend like Laura in the competition," Emelia told the publication.

"This competition will never come between us," Laura added.

It’s a Japanese cook off with my loz dawg @laurasharrad.. had to show her who was boss 😏 dish inspired by a little Momofuku salad #masterchefau

Looking back, the 'queen of sweets' has come a long way since we first met her on season six.

During her first time in the MasterChef kitchen, the then 24-year-old struggled to cope with the immense pressure of the competition. She even thought about leaving.

"I was going into challenges and choking," she told news.com.au back in 2014.

"Being constantly judged is hard to adjust to, and I really struggled. I couldn’t handle some of the feedback I was getting," she added.

"It reached a point where I wondered why I was putting myself through the stress."

So she set herself a deadline of six weeks, after which she’d leave the show if things didn’t improve.

"I considered walking away but gave it a go. Thankfully, I was in love with it by week three."

Unfortunately, the Emelia ended up placing third, after being eliminated on a whipped chocolate ganache challenge.

But she didn’t walk away entirely empty-handed.

Brent Owens, who ended up winning the season, gave Emelia $50,000 of his $250,000 prize money, after the pair made a pact that whoever won the competition would give the other a cut.

After leaving the MasterChef kitchen in 2014, Emelia went on to open her own cake business.

She now spends her days running cooking classes and baking wedding, engagement and birthday cakes at Emelia Jackson Cake Designs. She also told Mamamia that she's focused on putting her $250,000 prize money into boosting her cake business with a range of luxe packet mixes.

Another successful class at @gourmet_living – next class is first Wednesday of May! #cake

Backing has always been a passion of Emelia's since she was young.

"Ever since I can remember, I’ve baked. As a little girl, I was always in the kitchen making an enormous mess and loving every minute of it," she writes on her website.

"I was always the girl supplying birthday cake for my friends’ parties, bringing desserts to dinner parties and rolling around in sugar to my heart’s content."