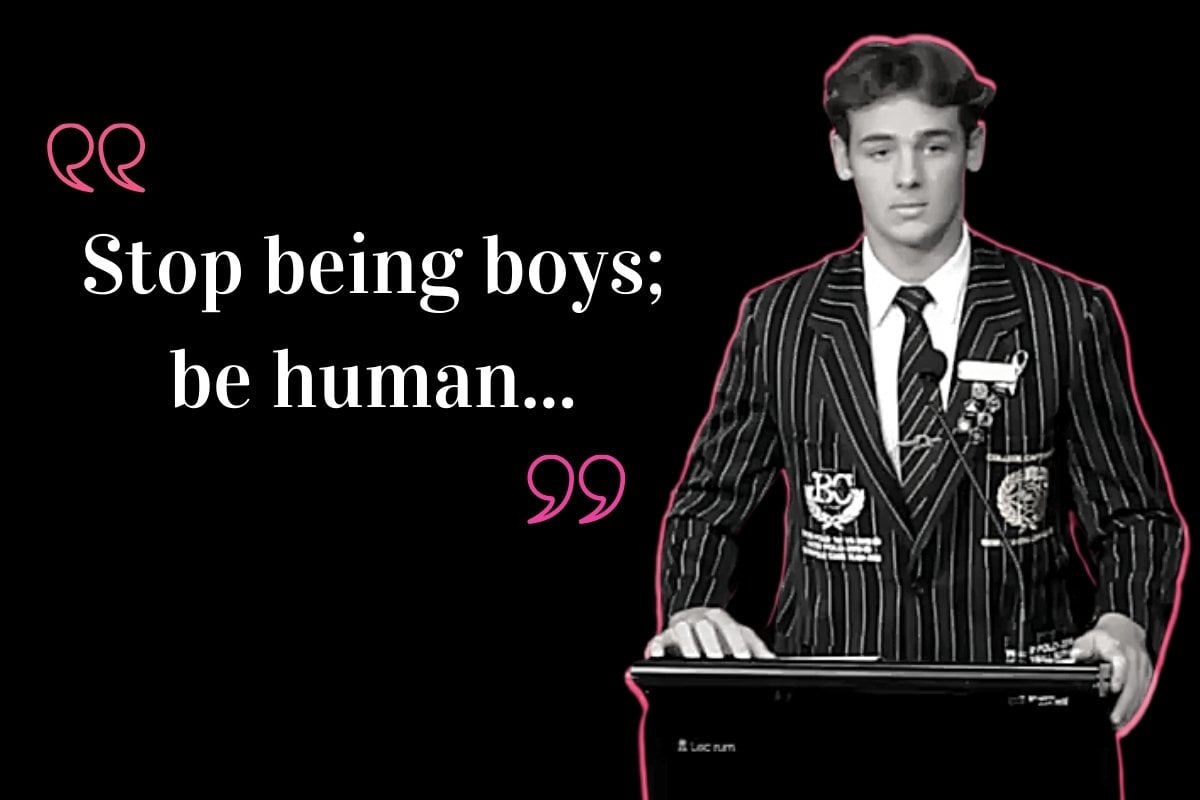 "Boys, this speech today is different, and it is the hardest one I've ever had to write. Not because it is difficult, but because it is heartbreaking."

These were among the words Brisbane Boys' College Captain Mason Black told his peers in a rousing address that has been viewed more than 260,000 times on Facebook and earned him nationwide recognition.

The teenager's message for his fellow students at the private Toowong school this week was an old one. It's one that women have been shouting for years, one that has intensified in recent weeks amid allegations that a woman was raped in Parliament House, and amid the March 4 Justice rallies that called for an end to gendered violence.

Brisbane Boys College was among several schools identified in a recent viral petition calling for consent to be taught as part of sex education.

The petition was launched by Chanel Contos, a former student at Sydney girls' school Kambala, and featured hundreds of allegations of sexual assault against private-school boys.

In the wake of the petition, the Queensland government this month announced a review into sexual consent education in schools.

"It makes me feel sick and it makes me feel embarrassed that our school is featured in the testimonies of young women who are victims of sexual assault," Black said. "I feel so ashamed that this issue is a part of our history and our culture...

"But realistically it isn't just those who are mentioned in the media. If you've ever objectified a woman based on her looks, talked about females in a misogynistic way or taken advantage without consent, you are part of the problem... Boys, don't allow yourself to slip into complacent denial by disregarding the seriousness of this issue."

Listen: The Quicky spoke to women about the movement behind the March 4 Justice.

Black revealed that his own mother had been subjected to sexual abuse as a 10-year-old, and queried whether his peers would be brave enough to hear similar stories from women in their lives.

"I wish I grew up in an Australia where the narrative that one in three women will be physically or sexually abused at some point in their life wasn't true, but it is," he said.

And so, Black called upon his peers to be proactive in stopping abuse, to stop with the sexist slurs and derogatory comments about women, and to keep each other accountable in that effort.

"This is not solely an issue of protecting women but an issue of educating men," he said. "Stop being boys, be human."

Since Black's speech went viral on social media this week, he has been invited to speak on morning television shows, newspapers and online media.

It seems it's simply that surprising that a young man would have the inclination and the courage to amplify the issue of sexual violence against women.

That sad fact is not lost on Black.

During each media appearance, he has deflected the praise.

"It's not about what I've done," he told Network 10's The Project on Friday night.

"It's about them, and I think that's really what's got to be focused on."

If you have experienced sexual assault, support is available. Please call 1800 RESPECT on 1800 737 732 or visit the website to speak to a trained counsellor.

jo bloggs a month ago

Reply
Upvote
1 upvotes
This gives me hope.  Be human.    Sad that in our society, it seems, being a boy is a licence for bad behaviour.  I’d actually like to take it one further and say, be aware of and respect all other living entities.  How is it that a human construct, money, is more important than our planet and ALL its wonderful inhabitants.
colleenhughes47 a month ago

Reply
Upvote
1 upvotes
I would like to see this speech played at sporting clubs and that includes surf lifesaving clubs, to see what can be achieved if men learn to behave towards women in an acceptable manner.  My husband, who is a middle son of three sons and the Father of our 3 sons, still needs to learn what behaviour is acceptable and what is not. Whether his parents just didn’t bother or perhaps it is just ingrained in boys at the start of puberty, to see or talk about girls in a sexualise way.
It works both ways.  I have read comments from women about male actors on social media that sexualises them rather than treats them as a person who is just doing a very good job as as an actor.
News
General
Opinion
True Crime
Politics
Sport
Explainer
Entertainment
Celebrity
Reality TV
Movies
TV
Books
Rogue
Royal
Lifestyle
Beauty
Fashion
Weddings
Home
Wellness
Health
Fitness
Travel
Food
Parents
Before The Bump
Pregnancy
Baby
Kids
Teens
School
Parent Opinion
Work & Money
Money
Finance
Career
Lady Startup
Relationships
Sex
Dating
Separation
Friendship
Family
Real Life
Couples