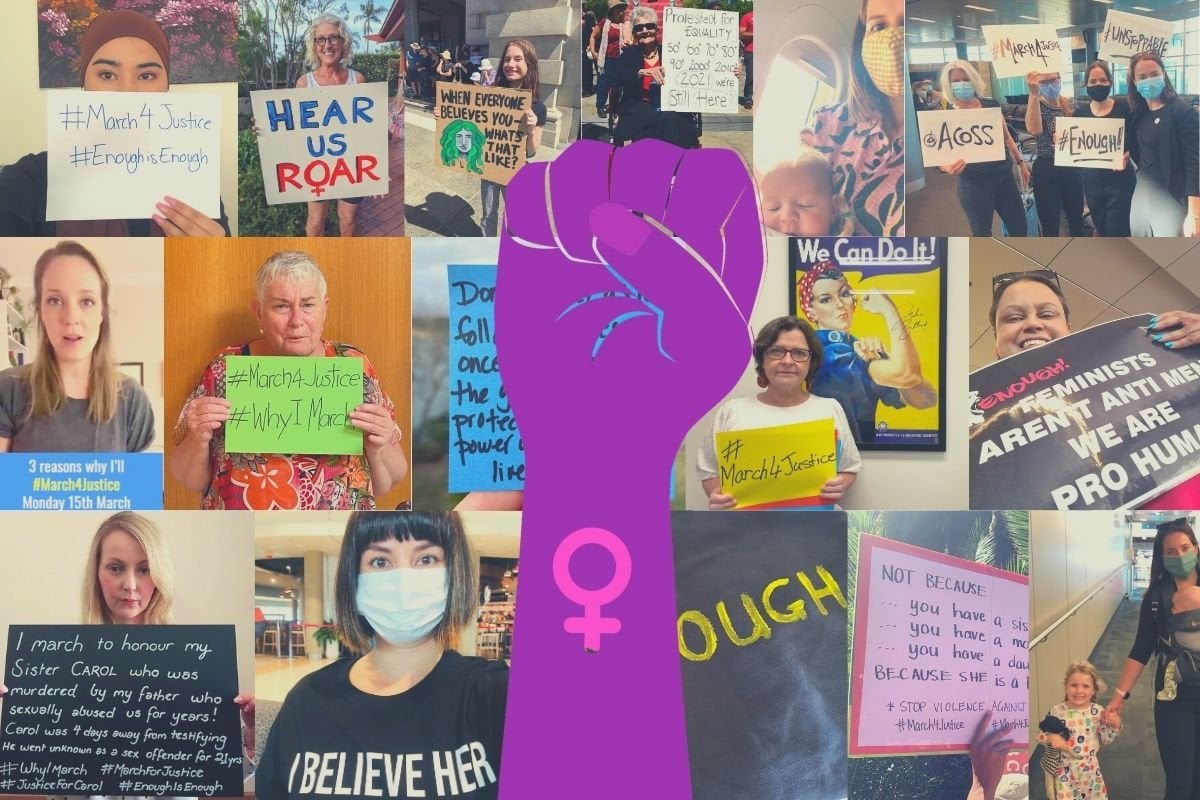 Today 100,000 women across the country are marching.

Mamamia will be joining the Sydney March 4 Justice rally, because equality, justice, respect and fairness is still something women are fighting for in 2021. And that's just not good enough.

Listen: The women of Australia are angry. Post continues after podcast.

In recent weeks we've watched our country's parliament accused of sexism, misogyny, dangerous workplace culture and a lack of equality.

We've watched our leaders, and our government, fail to act, defiantly, on rape allegations brought forward by various women.

We watched our Prime Minister admit that he was only able to truly empathaise with an alleged victim after being told by his wife to imagine she were his daughter.

In case you missed it....post continues after video.

We watched as the minister whose office that young woman was allegedly raped in called her a "lying cow".

We've watched as more and more staffers from all sides of politics, both federal and state, stood up and said either 'me too' or 'her too'.

We've watched young women describe in horrific detail the shocking sexual assaults they were subjected to as young girls at the hands of private school boys.

We heard about the murder of Jasmeen Kaur. We lose one woman to violence per week on average.

We watched the news unfold that a woman was kidnapped on a brightly lit street in the UK, with a police officer charged with her murder over the weekend.

Last Monday was International Women's Day. Most of us spent the day enraged as we absorbed the stories and experiences surrounding, or directly affecting, us.

So today we march.

Organisers of today's protest are demanding action against gendered violence, sexual discrimination and the lack of federal government action on issues affecting women. They will not be meeting the Prime Minister behind closed doors as he invited them to.

You can find out about the details of a march near you below.

Are you ready to #March4Justice across Australia today? You can check event details on https://t.co/BYeZV7oENFhttps://t.co/dc9zVhijRZ

If you can't march, you can wear a black shirt. You can tie a black ribbon to your door. You can chalk your driveway. You can add your name to the petition.

You can pause with us at midday and demand justice for women.

Because we and the women of Australia are furious. And enough is enough.

While we're gone, can we suggest the below reading:

Reply
Upvote
Good luck, I hope it gets a reaction.
I think they should meet with the PM though.
L
laura__palmer a year ago

Reply
Upvote
2 upvotes
@snorks He should meet with them in a public setting, not behind closed doors. All women have the right to know what is said.
C
cat a year ago

Reply
Upvote
1 upvotes
@laura__palmer they refused to meet with him, and rightfully so. Action and accountability or it doesn’t count.
S
snorks a year ago

Reply
Upvote
1 upvotes
@laura__palmer why wouldn't the women tell the crowd what he said?
You can't have a conversation with thousands of people.
S
snorks a year ago