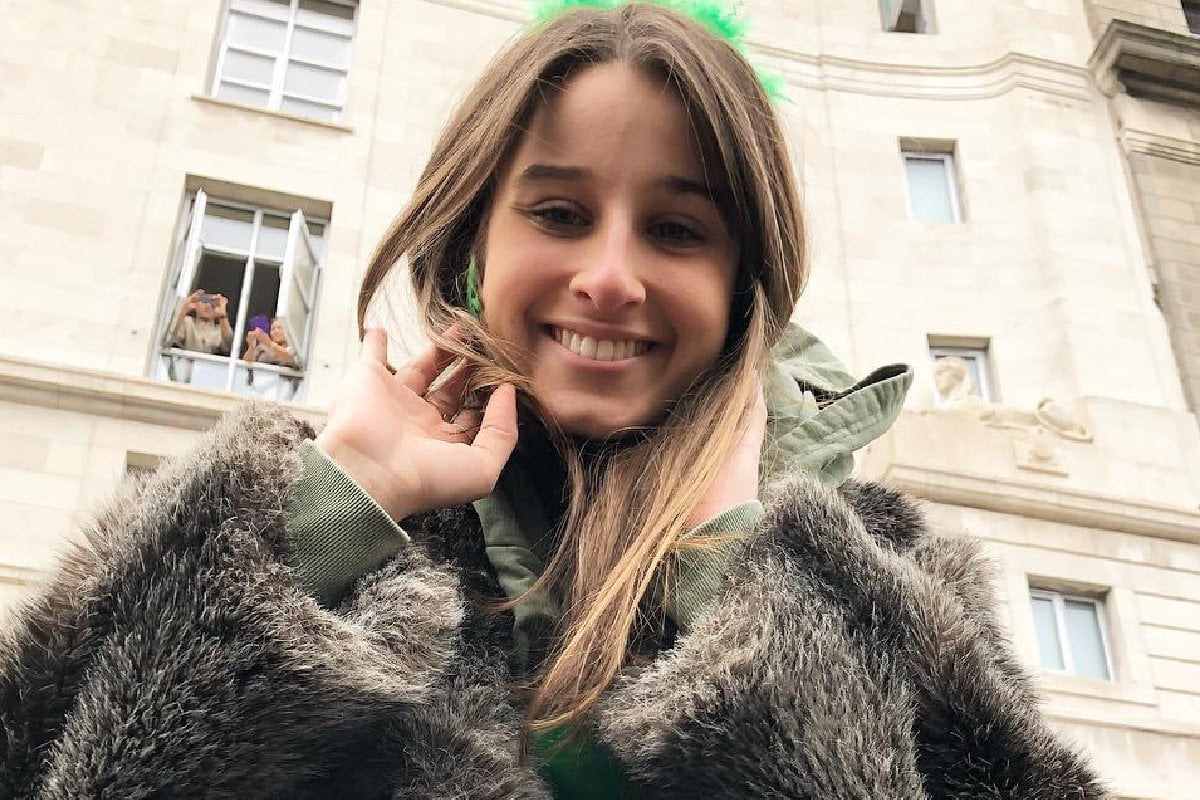 On Thursday night, Chanel Contos, a former student at Sydney's Kambala Girls' School, started a poll on her Instagram.

She asked: "If you live in Sydney: have you or has anyone close to you ever experienced sexual assault from someone who went to an all-boys school?"

Within 24 hours, she received nearly 300 responses, with 73 per cent of them saying yes.

Soon after, Chanel asked whether those that said yes would share their stories, anonymously. The testimonies started flooding in.

On Saturday night, when Chanel spoke to Mamamia from London, the petition was sitting at 11,000 signatures. And in three short days, since she started it, she has received an overwhelming 1200 anonymous testimonies.

Chanel - who is currently studying her masters in gender and education at the University College London - explained that it was last year, when speaking to a school friend, that she realised it was time to have this conversation. 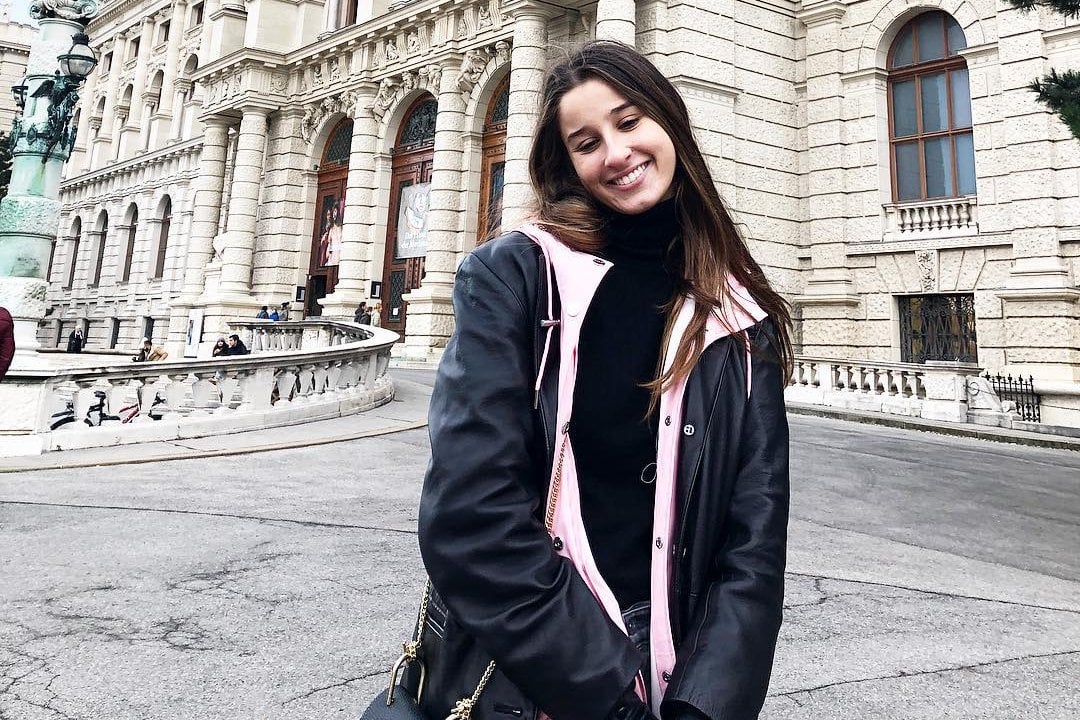 Chanel Contos. Image: Supplied. "I had the idea last year during lockdown and then I got sidetracked by moving to London," she told me.

"Then I was speaking to a friend, and they were crying about something that happened recently that they attributed to what happened when we were in Year Nine, and they got raped.

"I was just like, 'This is bullshit. Enough is enough'. Then I started Instagram polls, and it started from there."

The stories frequently recounted instances of unwanted sex with older boys, being forced to perform oral sex and rape while intoxicated or completely unconscious.

"I can recall countless instances of boys differing in age at a number of private schools, with stories of both sexually harassing and assaulting women... It’s imperative that children from a very, very young age are educated about sexual consent."

The petition aims to shed light on the fact that consent is taught far too late in Australian schools. And when students are finally taught about it (in Chanel's case, in Year 10), the information is still lacking.

"Those who have signed this petition have done so because they are sad and angry that they did not receive an adequate education regarding what amounts to sexual assault and what to do when it happens," she wrote in the petition.

So while the main focus of the petition is to introduce the conversation of consent sooner, it needs to extend beyond that.

"Sexual education can’t just revolve around consent," Chanel told Mamamia. "In single-sex schools, a gendered approach to sex ed needs to be taken so that boys and girls get specifically educated on the things that are going to affect them the most.

"I’m now calling for all schools in Australia to reconsider their sex education system and it shouldn’t just include consent. But also, clear sex ed, toxic masculinity, rape culture and sexual coercion."

When we were in high school, those were things we just weren't taught.

Chanel and I both attended Kambala; we were in the same grade and had similar friends for years.

During our interview, we discussed how our peers (and many other students in the surrounding schools) were engaging in sexual activity before the discussion of consent was ever introduced.

The sex education we received, when we needed to learn about consent, was as simple as teaching us how to avoid STIs and not get pregnant.

The thought of sex education teaching us how to avoid and deal with sexual assault? That was taught much later on. Unfortunately, it was too late.

"During high school when most of this behaviour begins, in PE we focused on STDs, protection and bizarrely never once discussed consent. I actually think we spent more time discussing IV drug use... not a particularly relevant topic! Sex education shouldn’t be taboo. It's how we keep each other safe."

While Chanel acknowledges how thankful she is for the education she received at Kambala, she wishes these uncomfortable conversations were discussed sooner.

"I'm really thankful for the education I got at Kambala. I was really privileged to have that education. They set the foundation for most of my feminist values today and I think they did a really good job as a school," Chanel said.

"It’s just they really missed the mark on this one," she said.

In response to this petition, Mamamia reached out to six private schools explicitly mentioned in the petition.

Graham Leddie, Principal of Sydney's Waverley College, told Mamamia that "we need to raise our expectations of a generation of boys in Australia that have a reputation for being self-serving, entitled and craving instant gratification. For this reason, we encourage schools to be held to a high standard".

At the time of publication, Mamamia had not received comment from the others schools' involved.

While Chanel focused on private schools for this petition, she knows that this issue extends far beyond them.

"I started the petition because private schools are my context and that’s where I found the issue to be most prevalent," she said. "It’s where I thought I could make a change."

"Now that it’s gotten so much traction I want to emphasise that it’s an Australia-wide issue. It’s a worldwide issue.

"We can improve the next generation of Australia if there was curriculum changes or changes to consent laws."

Reply
Upvote
I personally have never agreed with single sex schools.  I just think it sends the wrong message that the opposite gender is so "other" that you can't possibly attend school together.  I don't think it encourages them to see each other as equals, or helps them learn how to work together (as they will inevitably need to do when they enter the work force).   I think it is even more important now that families are getting smaller and often kids may not have any siblings of the opposite gender.
S
snorks a year ago

Reply
Upvote
3 upvotes
@anon- You're only at school for 6-7 hours a day, 200-ish days a year.
Considering how the education system is failing our boys I think having the opportunity to have education tailored to that style of teaching can be beneficial.
C
cat a year ago

Reply
Upvote
2 upvotes
@anon- single sex schools consistently show great results for girls. They get more teach attention, speak up in class more and suffer far less harassment.
Simply going to a co-Ed school doesn’t make boys see girls as their equals, otherwise we wouldn’t have a gender issue in society anymore.
If you don’t like them, just don’t send your kids there.
K
katp a year ago

Reply
Upvote
2 upvotes
I don't understand why parents are not more on the front foot in helping their kids learn about basic respect for other humans. Schools are well-placed to talk to students about consent but I don't think that can be the only strategy for educating kids.
Schools and parents could also try educating their students about the dangers of extreme drinking and alcohol abuse. Who knows what damage children are doing to their brains when they are drunk enough to be unconscious and brains are still developing?
News
General
Opinion
True Crime
Politics
Sport
Explainer
Entertainment
Celebrity
Reality TV
Movies
TV
Books
Rogue
Royal
Lifestyle
Beauty
Fashion
Weddings
Home
Wellness
Health
Fitness
Travel
Food
Parents
Before The Bump
Pregnancy
Baby
Kids
Teens
School
Parent Opinion
Work & Money
Money
Finance
Career
Lady Startup
Relationships
Sex
Dating
Separation
Friendship
Family
Real Life
Couples