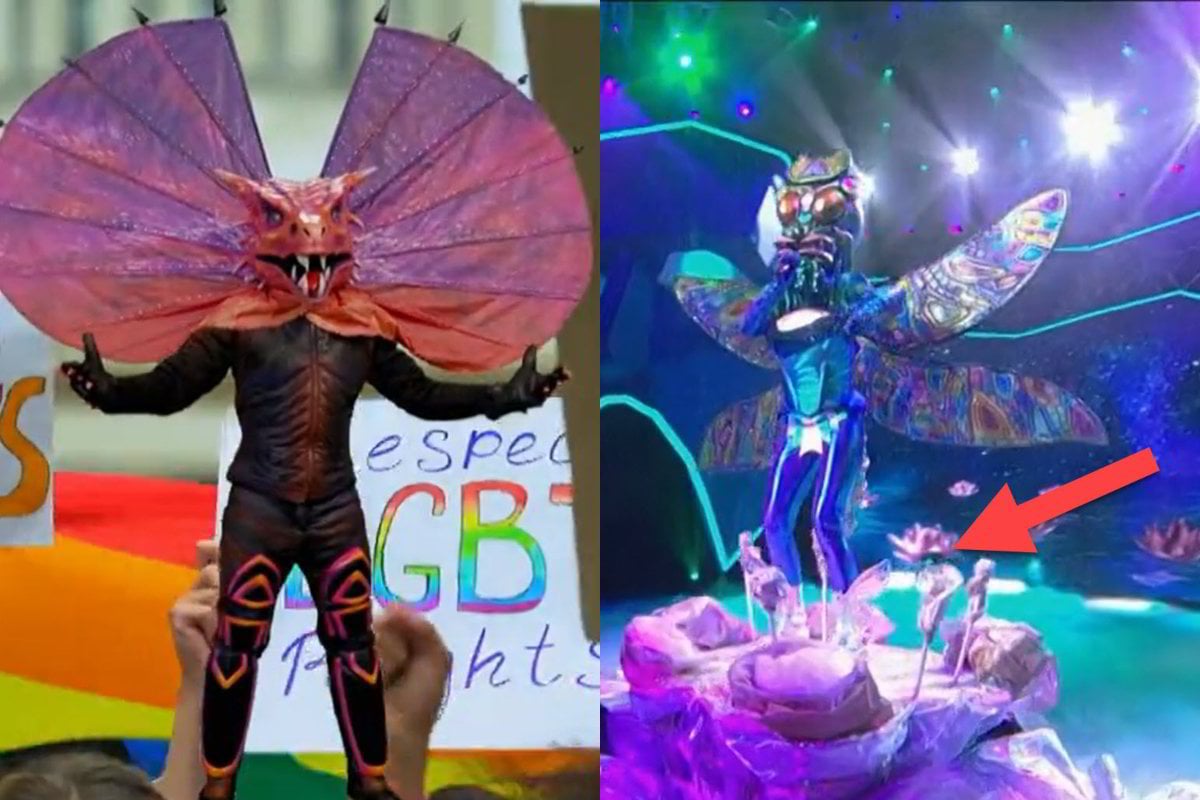 Somehow, in 2020, watching obscure Australian celebrities sing while in scary costumes is... comforting.

Last night we got to de-mask Echidna who sang George Michael's 'Faith'. Jackie O actually successfully guessed tennis star Mark Philippoussis, and she was almost as excited as Osher when she realised.

Oh. It looks like this show is going to get even more bonkers. Post continues below video.

In an effort to help you keep on top of what the hell you just watched last night, we’ve collated all of the clues you might've missed about who is hiding under the remaining Goldfish/Puppet/Queen/Dragonfly/Frillneck heads.

The Masked Singer Australia 2020 is officially kicked off!

Goldfish says she "was appreciated for the beauty of what I do" but nobody sees all the hard work that goes on behind-the-scenes.

"I might look like a small fish, but I thrive in the big ponds," she told us.

Goldfish strongly alluded to the Olympics during her clue's package, standing on top of a podium in a stadium. 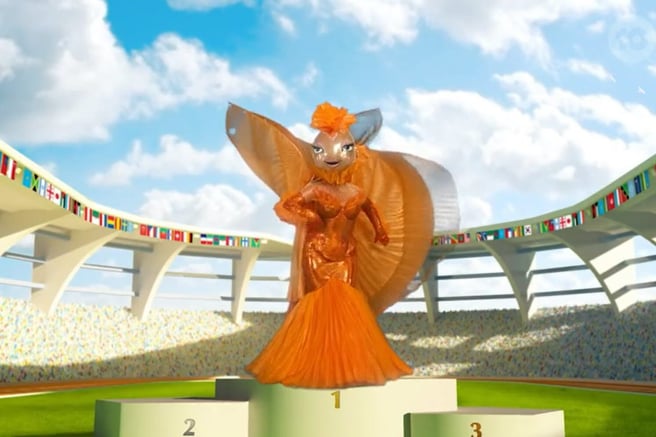 Visual clues included a book of ABCs: "People say goldfish have short memories. I resent that, I have an alphabetical knowledge of my history".

Goldfish then put on a black belt and showed off her martial art skills, saying she was bringing "a knockout".

Goldfish was asked if she is a sports star or an athlete to which she replied: "My upbringing was very physical and I achieved something unforgettable in Sydney in 2000," she says.

"Am I a puppet? "Yes and no," Puppet began. He says he loves to entertain, but nobody is pulling his strings.

"And you don't need the Magna Carta to tell you that," he added.

GO OFF MR PUPPET! Who is under the mask????? #MaskedSingerAU pic.twitter.com/Udbi54ZMXp

Puppet says he isn't perfect, so he believes in "do what I say, not what I do".

We know to look for clues everywhere, so what do graffiti cats behind Puppet represent? Probably not The Pussycat Dolls as Urzila passionately interjected. 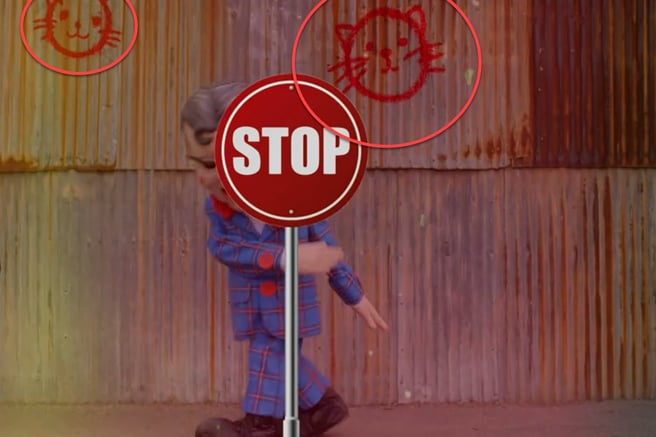 "Ties have played an important part in my life, and not just because I like to look good," Puppet said in a men's clothing store.

"Normally I'm a nice guy puppet," he added, throwing flowers on the ground. "But on The Masked Singer, I'm taking no prisoners."

FYI, there are a lot of legal clues in this one.

Jackie asked Puppet how old he is, to which he replied: "Puppets don't age in human years, but the events of 1964 impacted my career."

Most of the chatter on social media is convinced this is Kate Miller-Heidke, with most making the prediction even before the show started.

Oooh looks like there's some royalty this year! WHO IS UNDER THAT MASK!? #MaskedSingerAU pic.twitter.com/BL7K0IF5sG

In her clue package, Queen said her "glorious stature doesn't register in my humble beginnings".

Adding: "I was expected to be known by my Italian works, but turned away and followed my own royal path by popular demand." 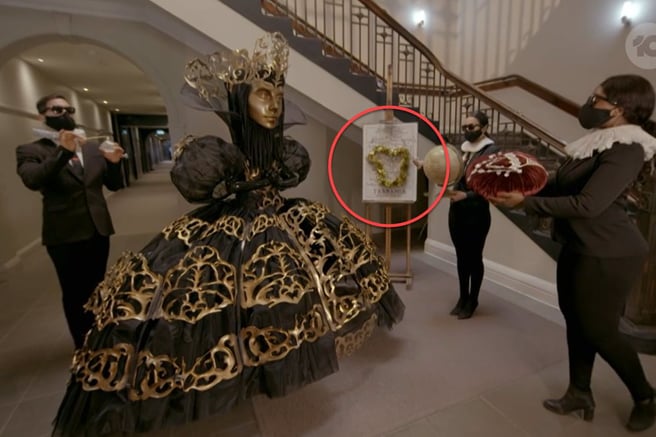 Behind her, there is a map of Tasmania wrapped in tinsel.

Queen "remembered the cold times as a child, and yet I was never cool", and has been a bridesmaid 13 times but "now it's my turn. I'm already a queen".

After the clues, Queen sings The Weeknd's 'Blinding Lights' and it is very Kate Miller Heidke-ly.

Urzila asks if Queen was on The Celebrity Apprentice, and Queen says she "certainly served her apprenticeship, but it wasn't on TV".

Dannii Minogue: One of the Veronicas.

Dragonfly is always on the move, stopping briefly then moving on again, according to her.

With wings like these, let's hope she doesn't fly away before we can unmask her! #MaskedSingerAU pic.twitter.com/EQmv9ouwbW

"Am I a triple threat? Quadruple? Quintuple? Dragonflies aren't a threat to anybody.

"I just want the world to be a kinder place. It can be hard to have my voice heard above the crowd. But I've always found a way," Dragonfly said, while the package showed her performing in front of a very large crowd.

Dragonfly has had her "share of tumbles" in life which were embarrassing, but she has to laugh them off and move on because as she says, "After all, it's not a disaster, like the Titanic." Hmmm.

Dragonfly sings a lovely rendition of Cyndi Lauper's 'True Colours' and it definitely sounds like a professional singer. 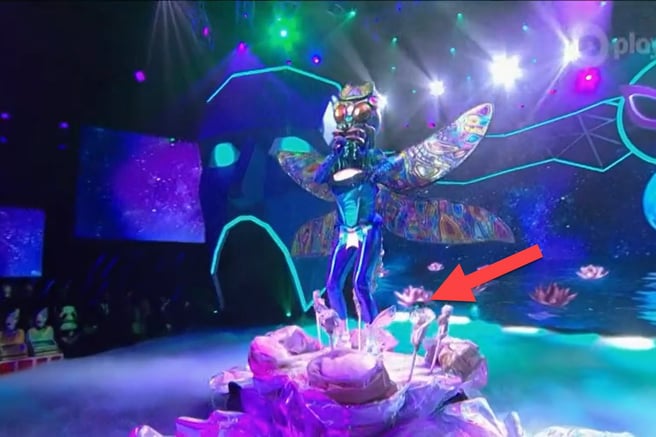 Jackie O asks if Dragonfly has ever been involved in a scandal to which she replied: "I live my life openly, but I can't be responsible for what other people say."

Frillneck chose his mask because "under pressure I can put on a real show".

BANG BANG into our hearts! Frillneck arriving to #MaskedSingerAU in style! Who is under the mask? pic.twitter.com/ga1WSeHzIN

"I've waited a long time to get where I am. A lot of work goes on behind the scenes with the puppet masters," he said, explaining that he doesn't work nine to five.

Frillneck knows what it is like to "be savaged by those you serve", which he told us while handing out newspapers to extras in his clues' clip. 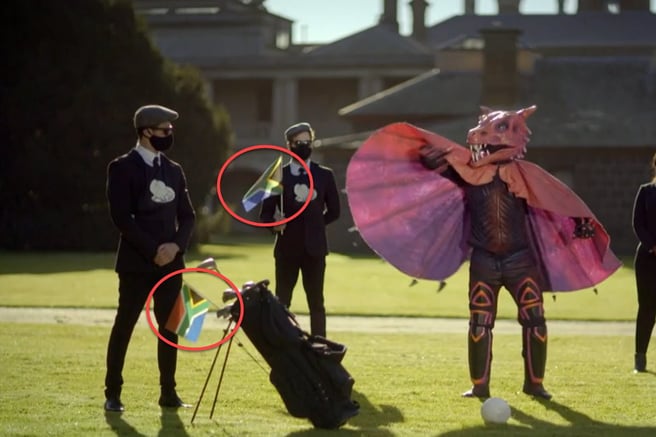 We then see him playing golf, with a South African flag hanging from his golf clubs.

"I love my country and I love its history. I just want everyone to get a sporting chance, but knocking down tall poppies can be fun too," he said. 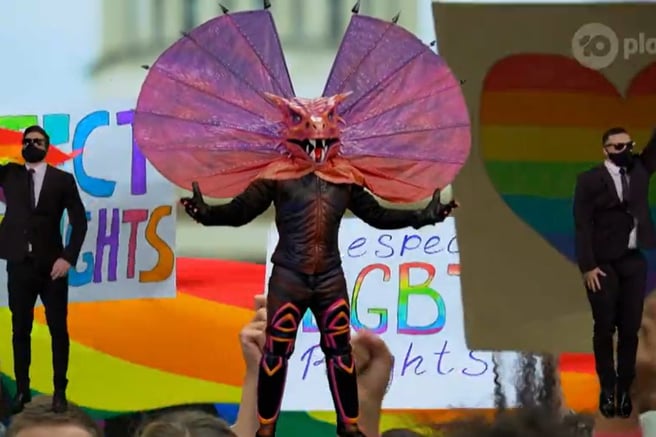 Frillneck has lots of opinions, and in the package he stands in front of an LGBTIQ+ flag and signs reading "respect LBGT rights".

Urzila straight up asks if he's a theatre performer, and Frillneck is typically vague. But basically, yes: "I am comfortable putting on a show."

More borderline terrifying masks will be singing tonight when The Masked Singer returns at 7.30 on Channel 10.