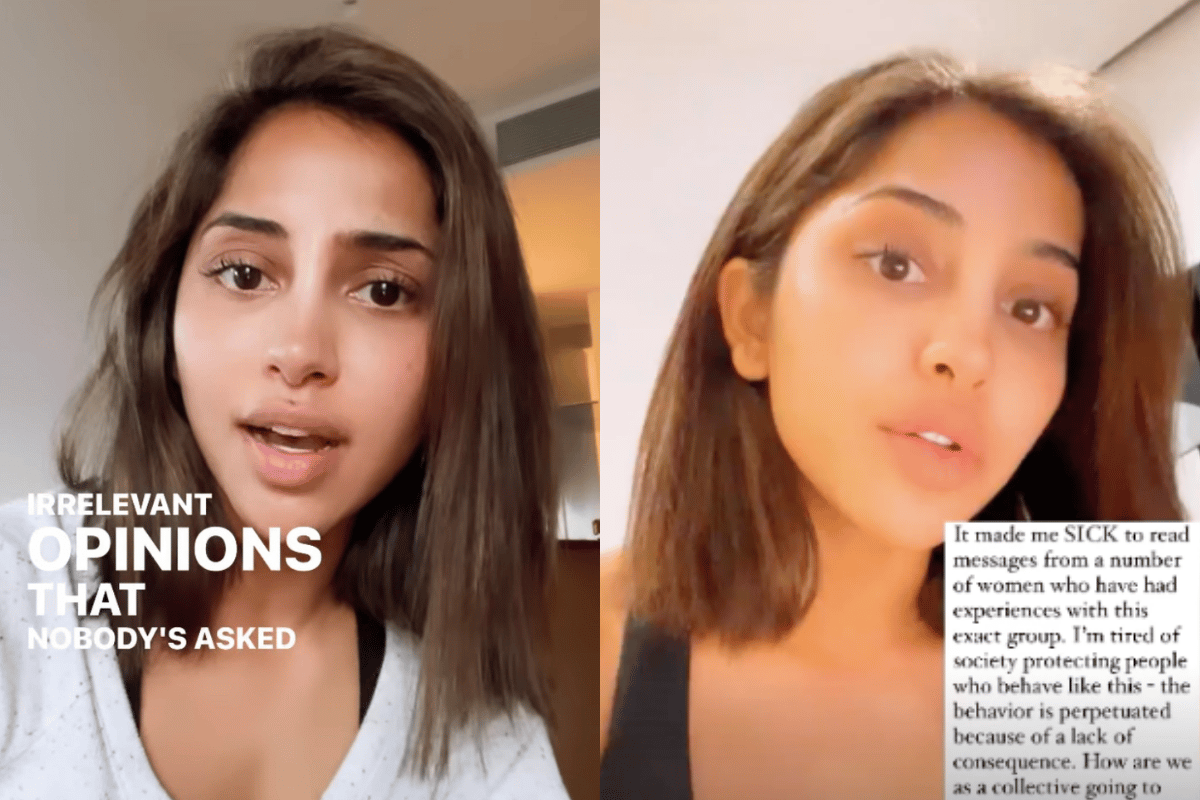 When Maria Thattil was accidentally added to a group chat full of men, she was "disgusted" by the messages that she saw.

In a series of posts on her Instagram Stories, the current Miss Universe Australia shared that she was added to a conversation with 19-year-old men who were talking about women "like we are pieces of meat".

But when she called them out on their "sexist" and "misogynistic" messages, only one responded.

"I was disgusted to be added to that group chat, I was disgusted to read those messages and disgusted that nobody had anything to say when I called them out on it. Apart from one of the people in the chat," she said in a video on her Instagram Stories. 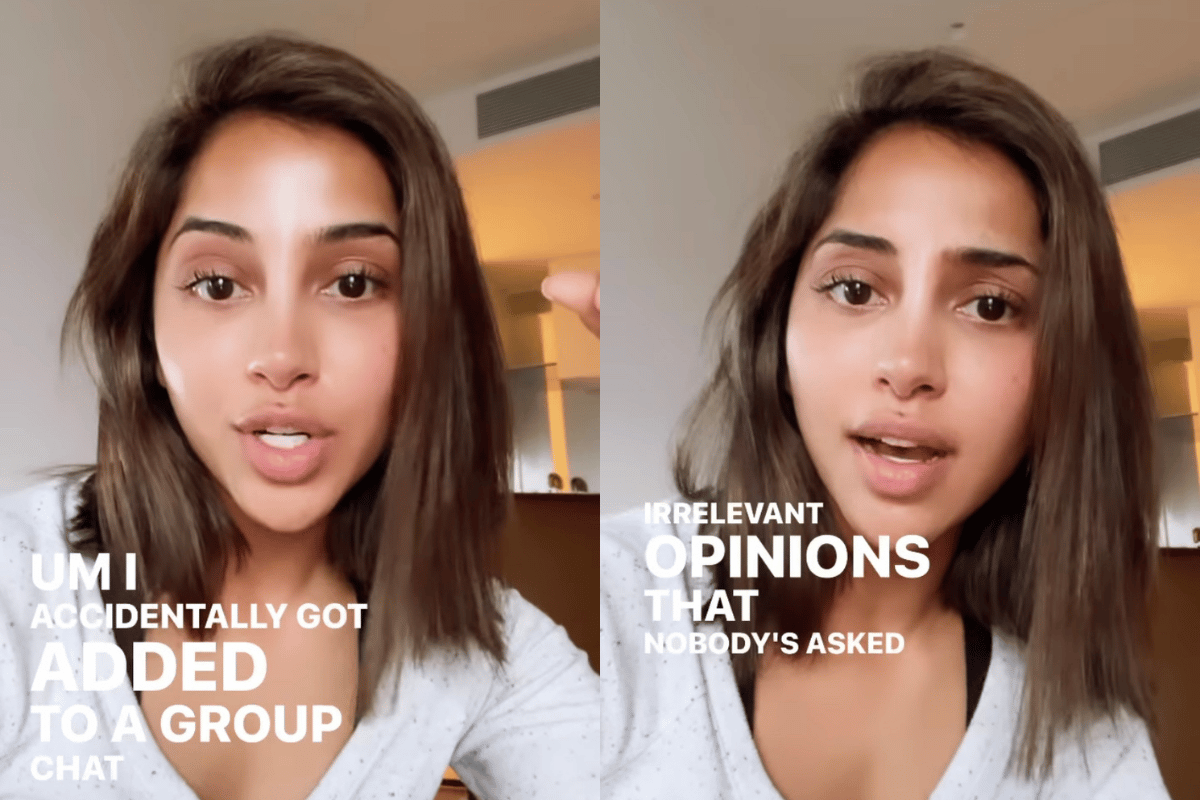 In response, "They said that they were sorry and they would have a stern chatting to each other".

But as Maria pointed out, this isn't exactly a new issue. She personally encountered the same behaviour from boys when she was in high school.

"I'm trying so hard not to shake with anger as I say this. The boys in this chat, they're about 19 years old. 10 years ago I was just coming out of high school when I was about their age and I tell you now that the boys that I went to school with are exactly the same, where women were talked about like they were nothing more than sexual objects who existed for the sick satisfaction of perverts like this."

The 28-year-old went on to say that men's "sexist attitudes" towards women aren't just confined to the classroom.

"We've got people like Brittany Higgins talking about rape allegations in Parliament, and you might not see the link but... the sexist attitudes that I have read in this chat, they are fundamentally linked to the same attitude that allow men to take advantage of women because at the end of the day what are we? 'Objects'."

"This is why women are so angry, because we have been saying this for decades. We don't feel safe because we're not respected, because of the way that we are perceived and because of the lack of attention and the lack of priority given to matters concerning our safety and how we are treated," she continued.

"The leadership in this country when responding to something like rape allegations tells you everything you need to know about the attitude towards women."

Listen to Mamamia Out Loud, Mamamia’s podcast with what women are talking about three times a week. Post continues below.

After sharing the posts on Instagram, Maria received a number of messages recounting similar behaviour or "degrading attitudes" that the same group of men displayed towards other women, and in particular, women of colour.

It was also alleged that the group previously sent nude photographs of women in the chat and had made some sort of commentary.

"It made me sick to read messages from a number of women who have had experience with this exact group. I'm tired of society protecting people who behave like this - the behaviour is perpetuated because of a lack of consequence." 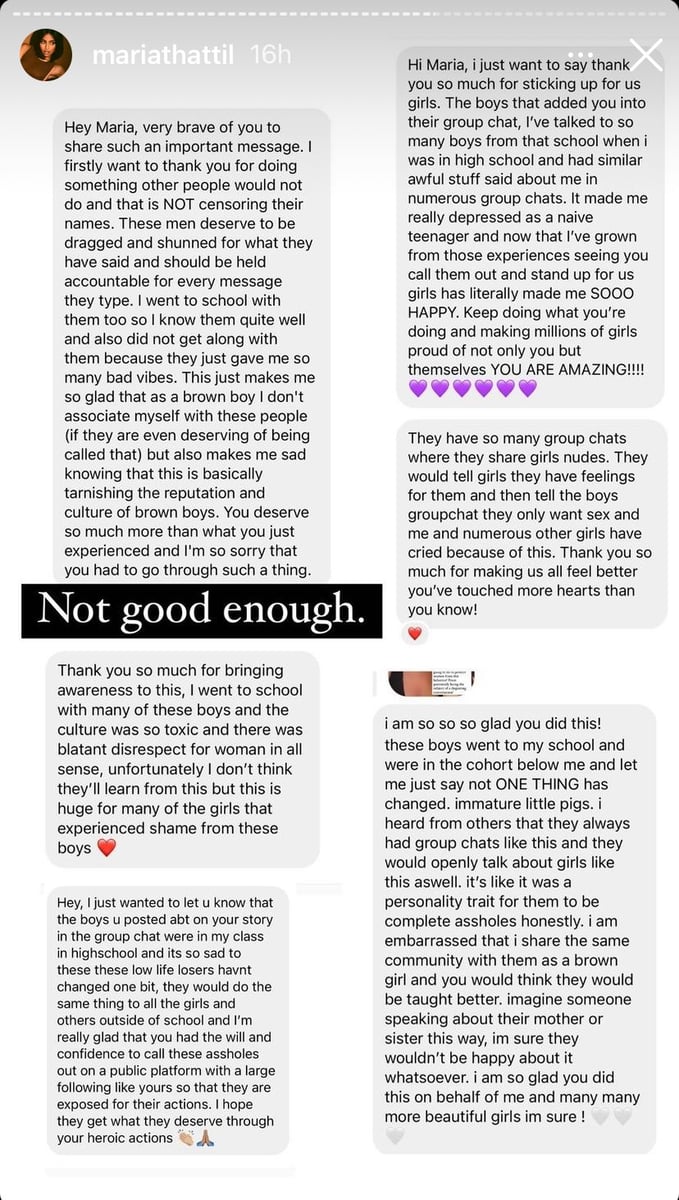 Maria went on to say that she had contacted the universities that the men attend to understand what they are doing "to protect women from attitudes like this" and "how they feel about having students who use racial slurs or talk about women this way".

"It needs to be this serious. We need to not wait for stories of rape, stories of harassment, stories of women literally being physically endangered before we act on this."

"We know already that our workplaces, our universities and our institutions, the systems they have in place to protect women, it is inadequate as it is. So I want to ask them personally, 'What are you going to do about this?'"

Maria was also flooded with messages of support from women who praised her "for speaking up for us".

"Why haven't these women not been able to speak up for themselves? Because our culture does not allow it... In many spheres of our life we are told to be quiet and deal with it. But I think we need to stick up for ourselves and each other."

"You absolutely don't need to be quiet."

caz gibson a month ago

Reply
Upvote
I would be taking issue with those boy's parents & grandparents - not just the men but the women too who brush it off as "men being men".
The blatant misogyny in our western  society can be traced directly to the attitudes of the men in Victorian/Edwardian  times.
They were brutalized by wars, resentful of how women took over their jobs while they were away and how they could see that women were expecting to be listened to and expected to be able to vote.
"How dare they - they're only women" etc.
Religious & cultural traditions have always classed women as 2nd rate.
No wonder their males almost enjoyed the freedom to offend and diminish them.

Reply
Upvote
@caz gibson It's impossible to work out what time frame you are referring to when you say 'traced directly'.
Everyone already had the ability to vote before the first world war, at the beginning of the Edwardian times you mentioned.

katp a month ago

Reply
Upvote
1 upvotes
My genuine question, which is not to undermine the ghastly and vile nature of these messages and attitudes that ferment in the cesspools of the internet, is to wonder what Miss Universe contestants expect that gutter slime might discuss about such competitions and competitors.