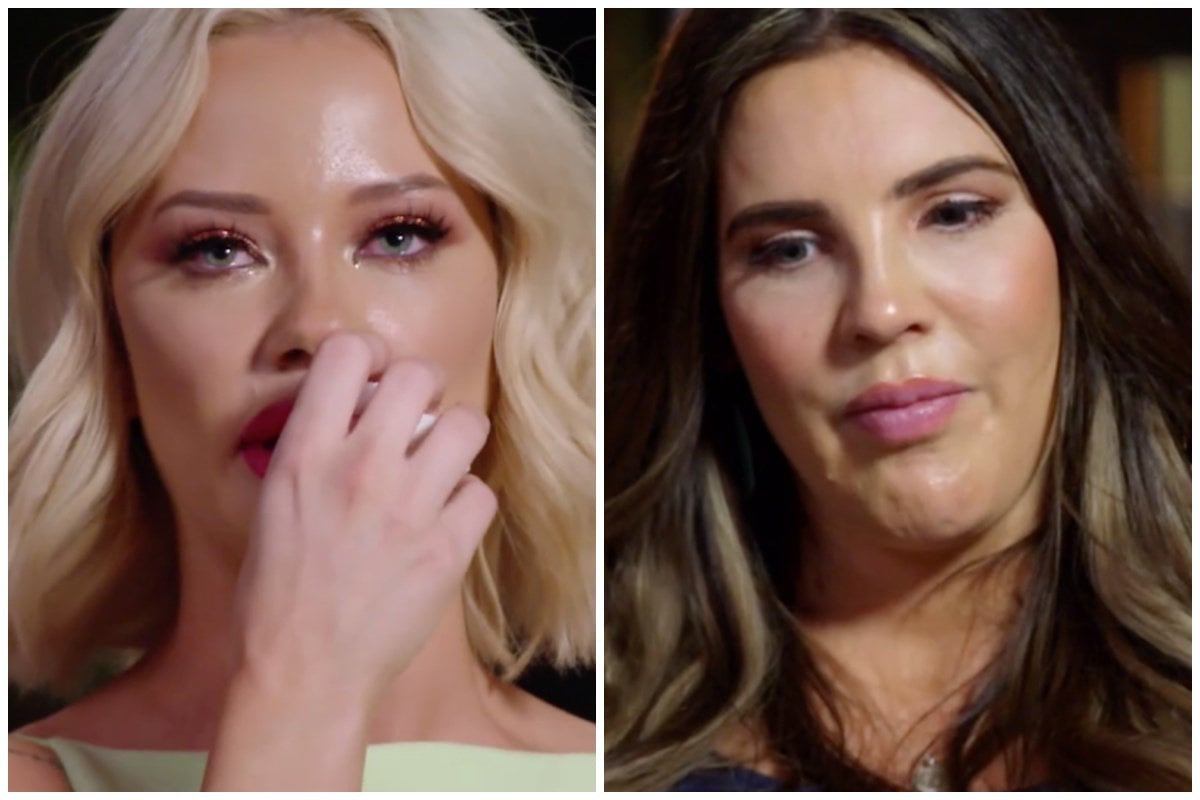 If you missed part one of the Married at First Sight reunion, you can read our recap here.

Despite being yelled out of last night's dinner party, Nasser's contract said he had to come back and visit the experts for 90 minutes, and yeah he ironed his party shirt.

But speaking of contracts.

At what point are we going to acknowledge Trish's absence? It is disrespectful to her memory. Because she would have loved nothing more than to be here and to ask Tracey and Dean (specifically) all about their sxc txts. 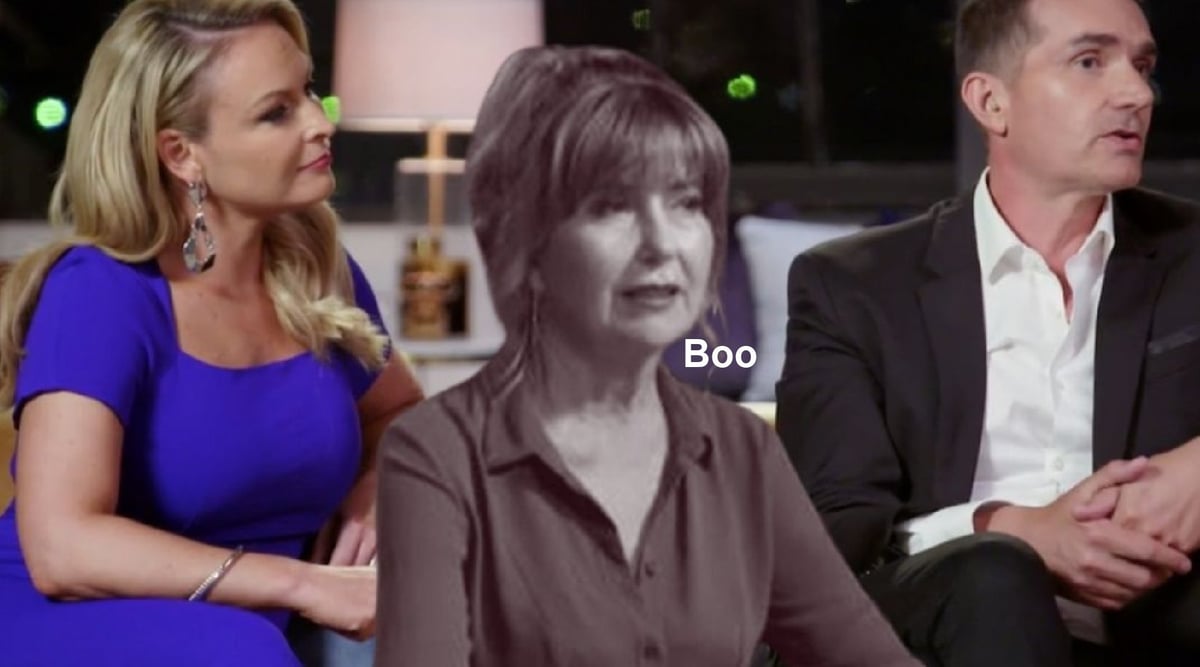 But it seems Trish was just another casualty of COVID-19 redundancies because as we all know, the fake marriage business was hit really hard.

Mel and John will make do with their smaller team because there are some things that need to be thoroughly investigated.

Namely, they know this show has fucked up the contestants' lives, but the real question is: to what extent.

John suggests they start with the subject of... Nassar... and yeah, he looks appropriately guilty.

Nothing brings the room together like their mutual hatred of Nasser. So he decides to yell an apology in people's faces but no one accepts it so he would very much like to take it back.

BUT HUSH IT'S JOJO AND WE GET THREE SEPARATE FLASH BACKS TO HER BEDAZZLED WHITE WEDDING THONGS.

"That is such a mood," Kartha Kardashian says and yes sweetie well put. 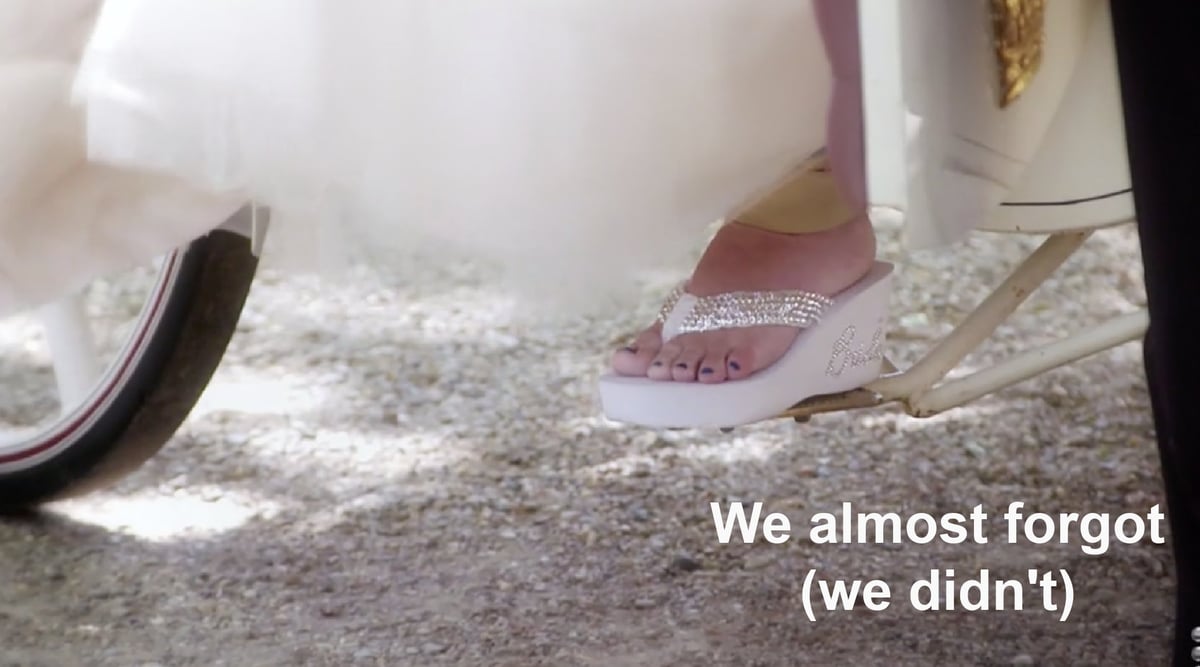 Jojo says she is now dating and her "moat door is open" which we assume means that her vagina is opening and we are personally here for it.

Next up are Dean and Tracey, and we're reminded of that time Dean got dumped on a sewage plant which was a metaphor for so many things. 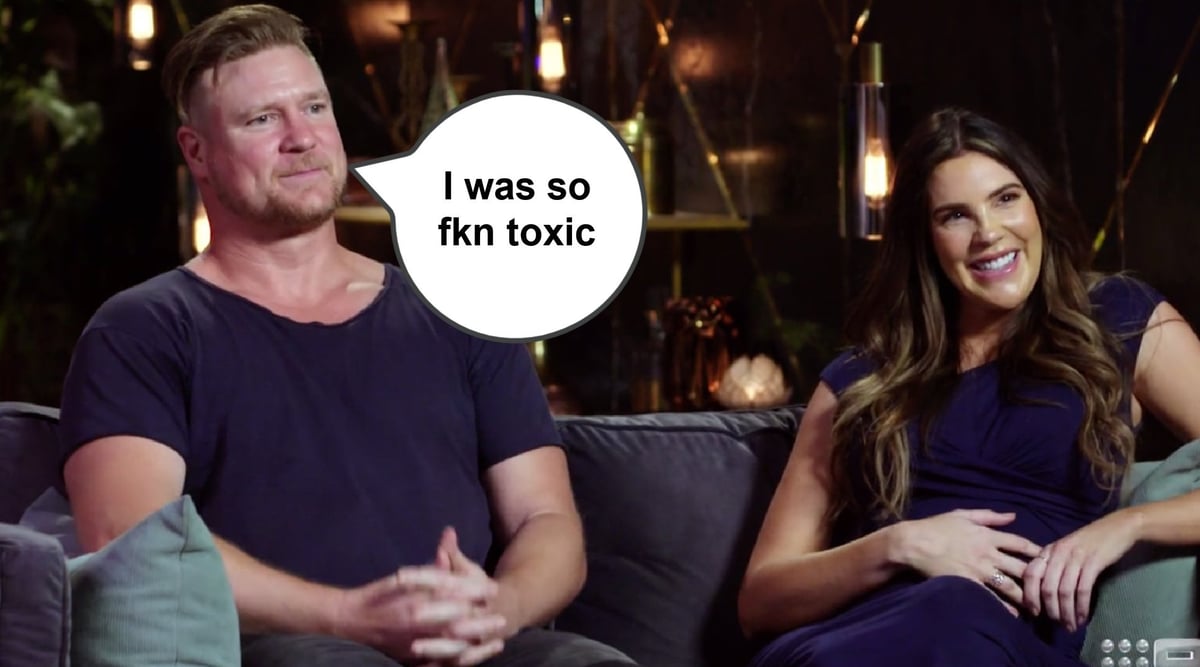 Would you look at that.

John Aiken asks eagerly, "What about your rapping Dean??" and he quickly responds, "I'm legally banned from rapping," and just like the bible reference from last night it's unclear if he's lying?? 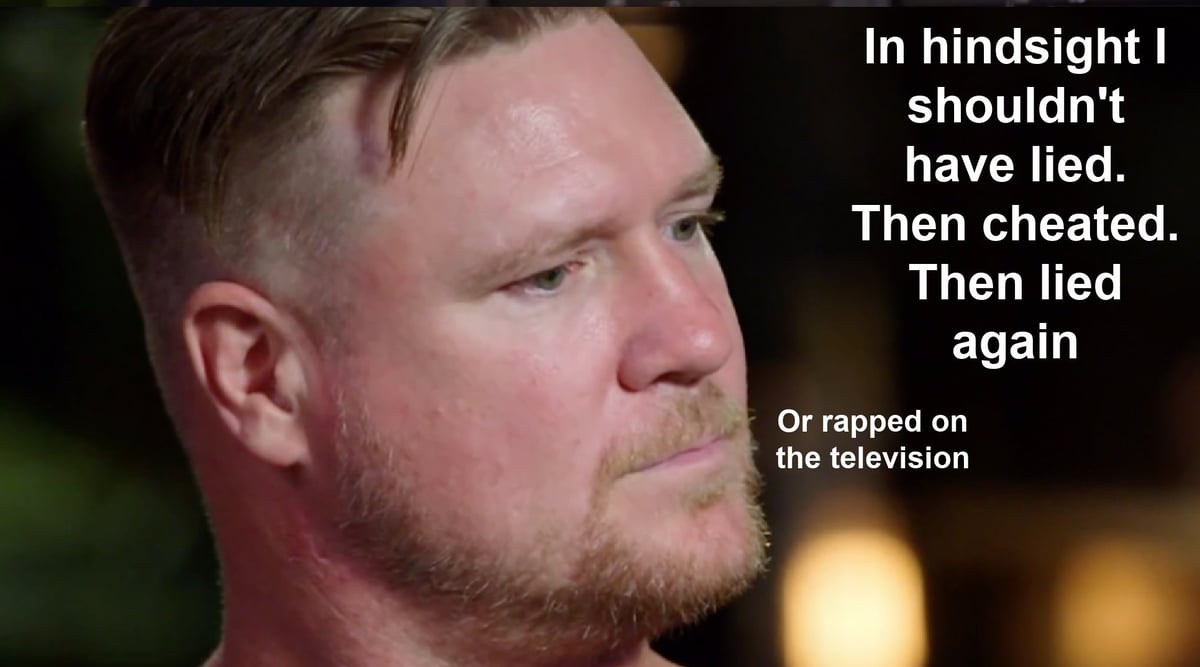 After we've relived the shit show that was their (toxic) relationship, Mel says confidently: "I love that you're sitting here, essentially as role models."

Before anyone can question Mel's bizarre throwaway comment, it's time for Mike.

And, yes. He's still in trouble for how he spoke to Heidi. 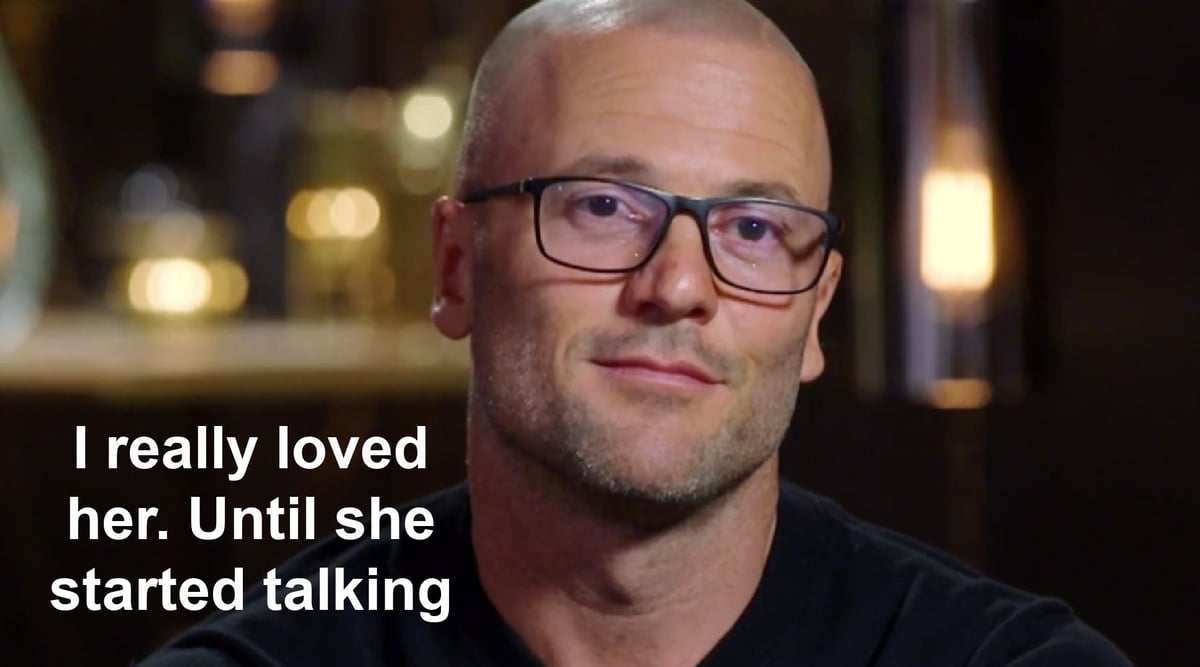 "She could light up a room like no one I'd ever met..." he says, as though Heidi is dead and not just refusing to come back to the Married at First Sight reunion show.

Even years later, we find it fascinating that a man who put such little effort into a relationship could be so devastated about it not working.

Mike admits he keeps trying to message Heidi but she doesn't reply, in the same breath he reveals he is in a new and current relationship with a different human woman.

The experts ask what he would do if Heidi walked into the room right now.

"I'd probably just kiss her..." he says romantically, while a disembodied voice yells "BUT UR SEEING SOMEONE". 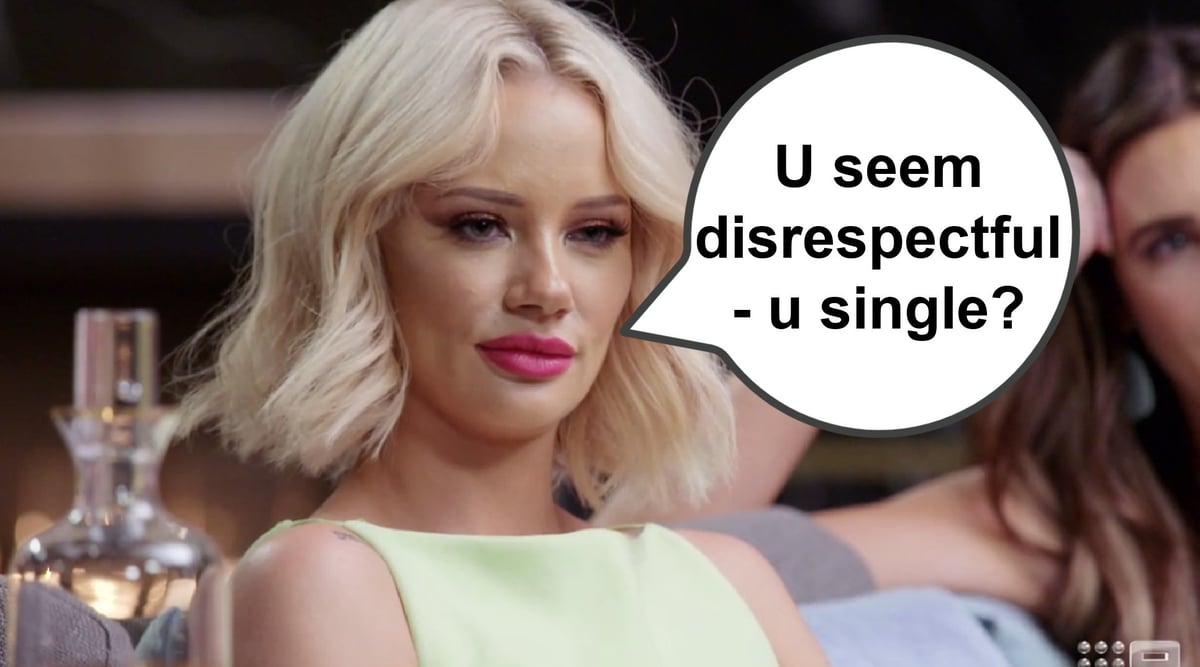 Let the man hurt a brand new woman on national television if he wants to.

Now it's Troy's turn and after playing the footage of him aggressively brushing his teeth for eight minutes, John Aiken fights off a rogue dentist who has tried to infiltrate the set to ask: "TROY... HOW ARE YOUR... GUMS? GENERALLY."

We're also reminded of the time Troy made 'Pasta Al La Troy' which had no pasta in it which was by far the least weird thing he did that episode.

It turns out that Troy would like the experts to match him with the lovely woman beside him named Ashley, pls. Even though they already did that. And he made her eat undercooked mince for no reason.

Next, Lizzie and Ines are invited to the couch and made to watch Sam fat shame Lizzie for the 45th time, before asking her on a scale of one to 10, how much it traumatises her every time she has to see it. 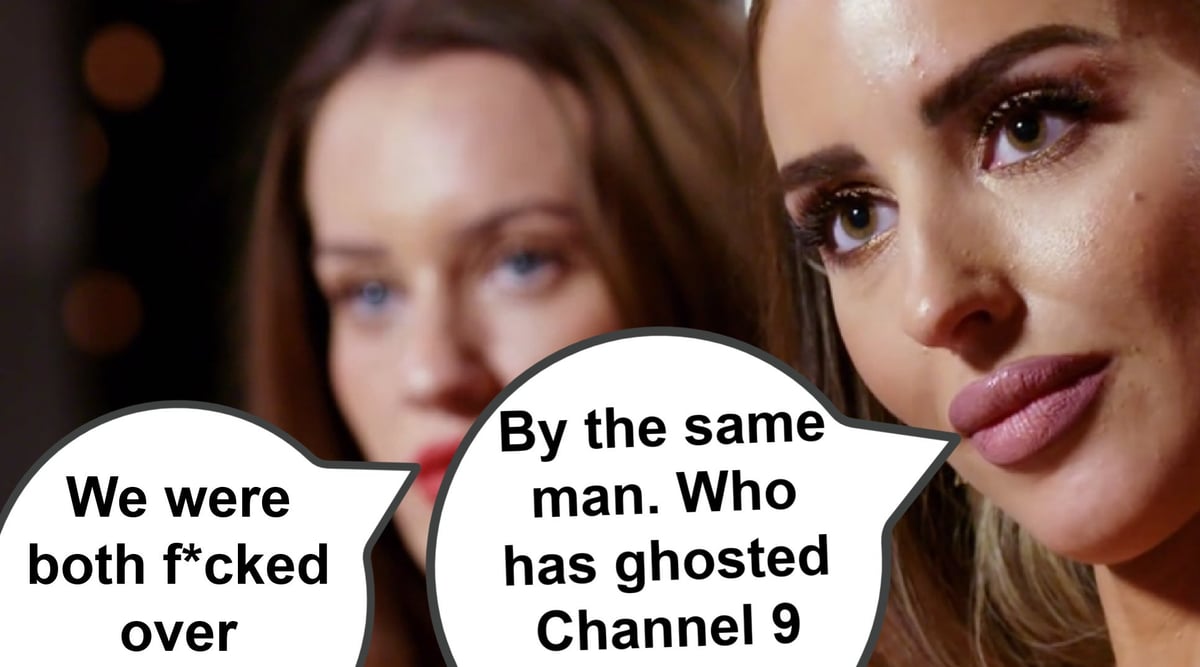 "He literally won't answer their calls."

Lizzie says 11. Out of 10. In that she thinks about. Literally every day.

"I can't forgive... I will never forgive that behaviour. Ever," she says.

We're then shown a montage of the time Ines had an extramarital affair with Sam and she's shocked but also appalled by her own behaviour.

While she watches an X-Rated sex scene between her and Sam she says, "Wow this is a lot," before muttering that she doesn't know why people watch this shit.

It's here we realise that Sam has been a missing person ever since 2019 which is going on two years. And people are surprisingly unconcerned as to his whereabouts.

The experts have decided that it's been too long since the throwing of a kitchen utensil and so they turn to Cyrell.

Cyrell recounts the time Jessika told the media Cyrell's relationship was fake which was a bit annoying.

"We're not on the same level plane," Jessika says and no comment.

"She's a mum now," she continues, to which Cyrell raises the (very valid) point that just because she's a mum now doesn't mean she can't hit a bitch/throw a fruit bowl/throw a wine on a grown woman. 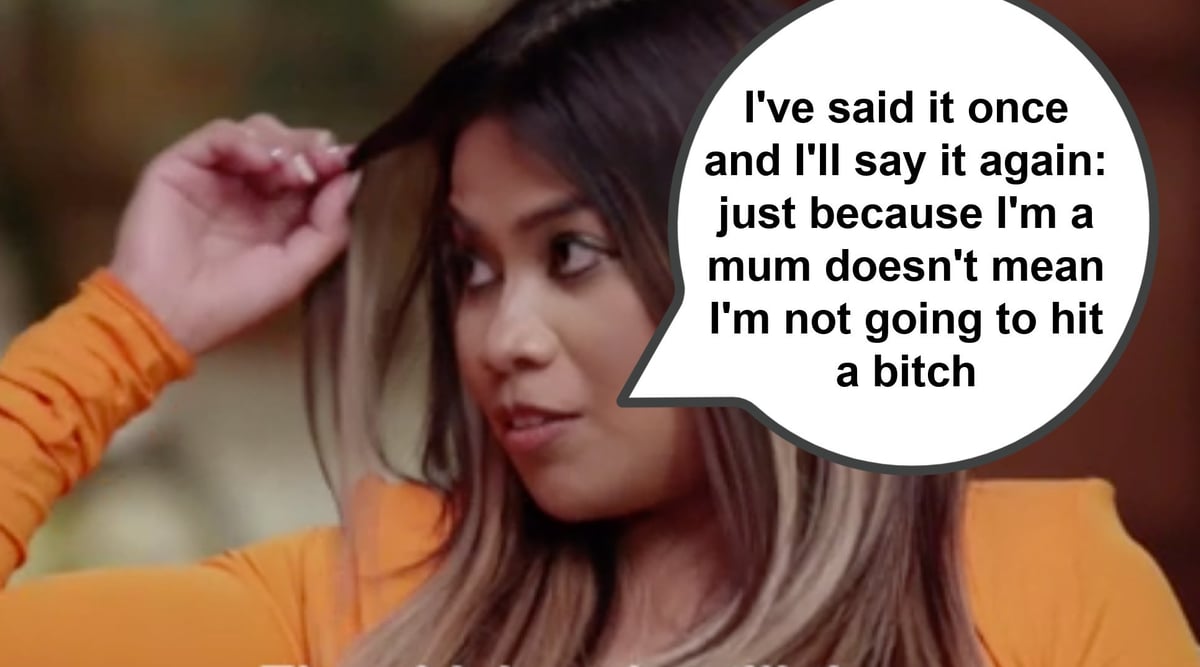 "It's called feminism look it up."

Jojo tries to calmly explain that all people mean when they bring up the fact she's a mother is that she needs to be a role model. For her son. Like Dean and Tracey are role models. For no one.

Dean interjects and tells Cyrell it's important that she teaches her son to stand up for himself, yes, but also teaches him not to be... violent. Cyrell listens patiently, and is then asked whether she's ready to leave this all behind her. 'Yes... in fact I'm ready to leave now,' she says but no that's not what anyone was... nevermind.

On her way out Cyrell yells that NO ONE will tell her how to RAISE HER CHILD and in her defence, she's probably right not to let a room full of former reality TV contestants give her parenting advice.

Jessika is then called to the couch to publicly remember the time she helped destroy two fake marriages. 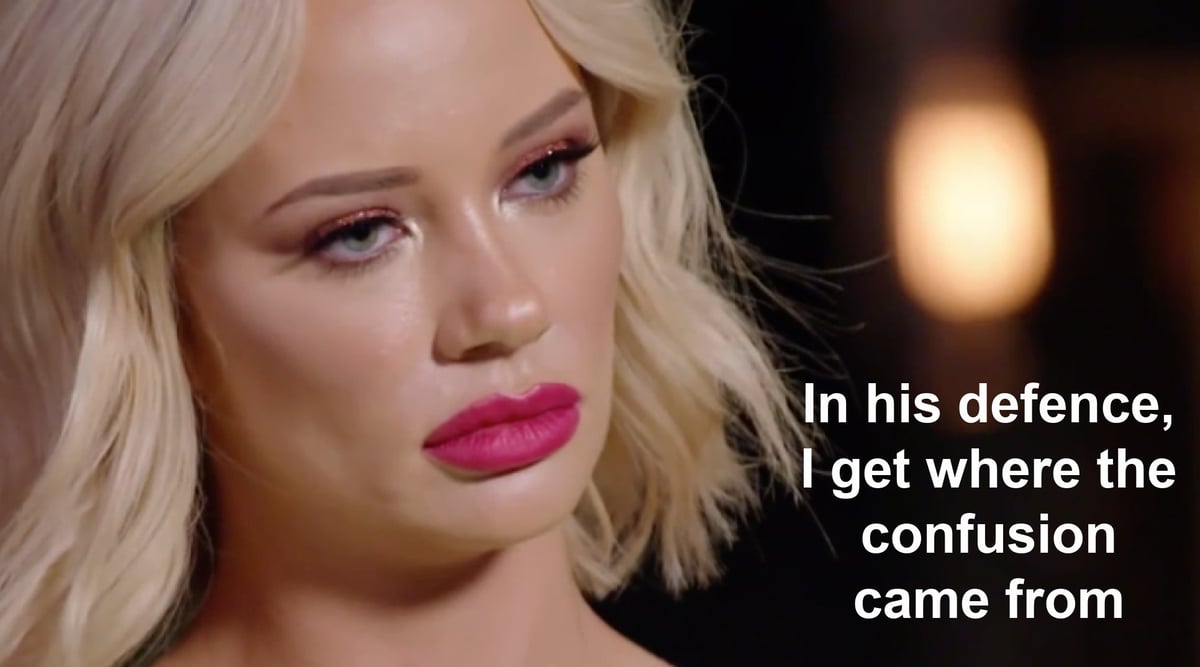 "I should've been more clear, in hindsight."

"I did love Dan," she says, which is honestly a surprise to several parties.

John then announces there are several successful couples here tonight, and we don't want to be rude but there are... two.

And one of them... break up later.

Kartha Kardashian takes a moment to thank John and Mel for giving her her Kanye, and yeah, he gives her free Yeezys.

'We're really enjoying where we are right now,' Martha says, and by that, she means Instagram.

Michael says being one of the most successful couples on MAFS is an achievement they can take anywhere and we don't mean to burst your bubble but... you... can't...

The experts thank everyone for being part of the Married at First Sight family and we know Nasser is thinking it. 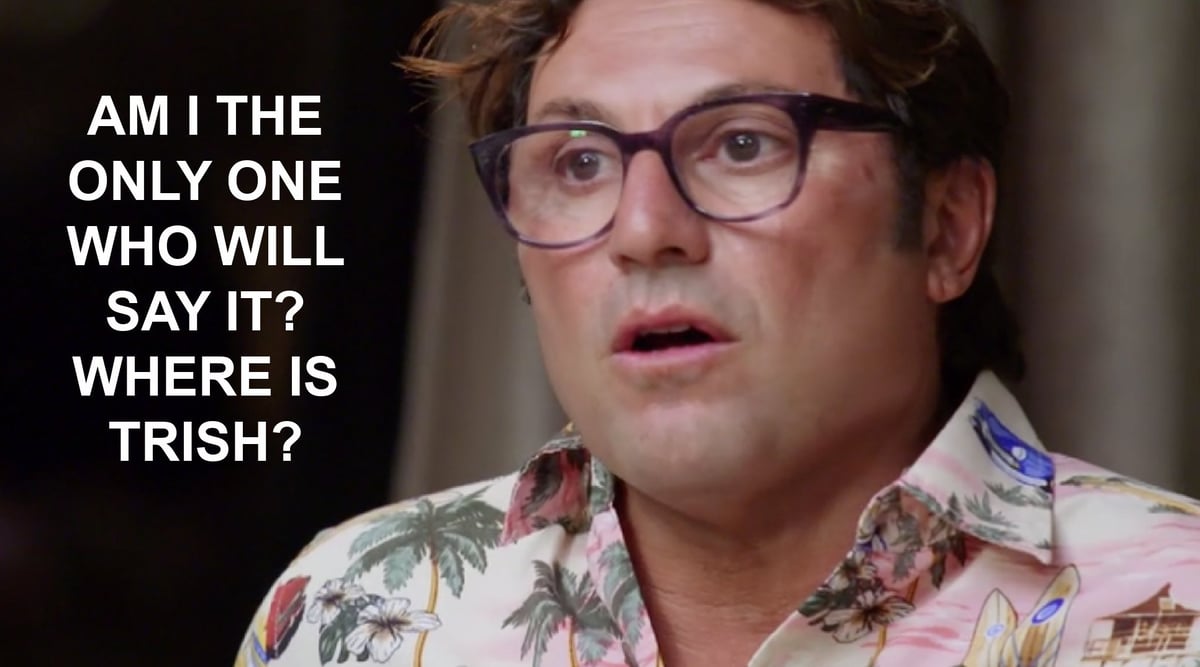 SPEAKING OF FAMILY WHERE IS TRISH.

Reply
Upvote
Cyrell has the emotional stability of a toddler. She should be embarrassed by her own behaviour, however, she doesn’t have the self awareness to recognise how inappropriate it is.
R
rush 2 years ago

Reply
Upvote
@jadebleese it gets her attention and everyone talking about her, isn't that the main point of these shows?
M
mamamia-user-649450993 2 years ago

Reply
Upvote
Ok so in commenting on this I’m admitting I watched.... but, one thing that really fired me up was Mike “apologizing” for Heidi being upset by his comments. No mate, apologize for YOUR toxic behaviour, which caused pain. Not Heidi’s reaction.
C
cat 2 years ago