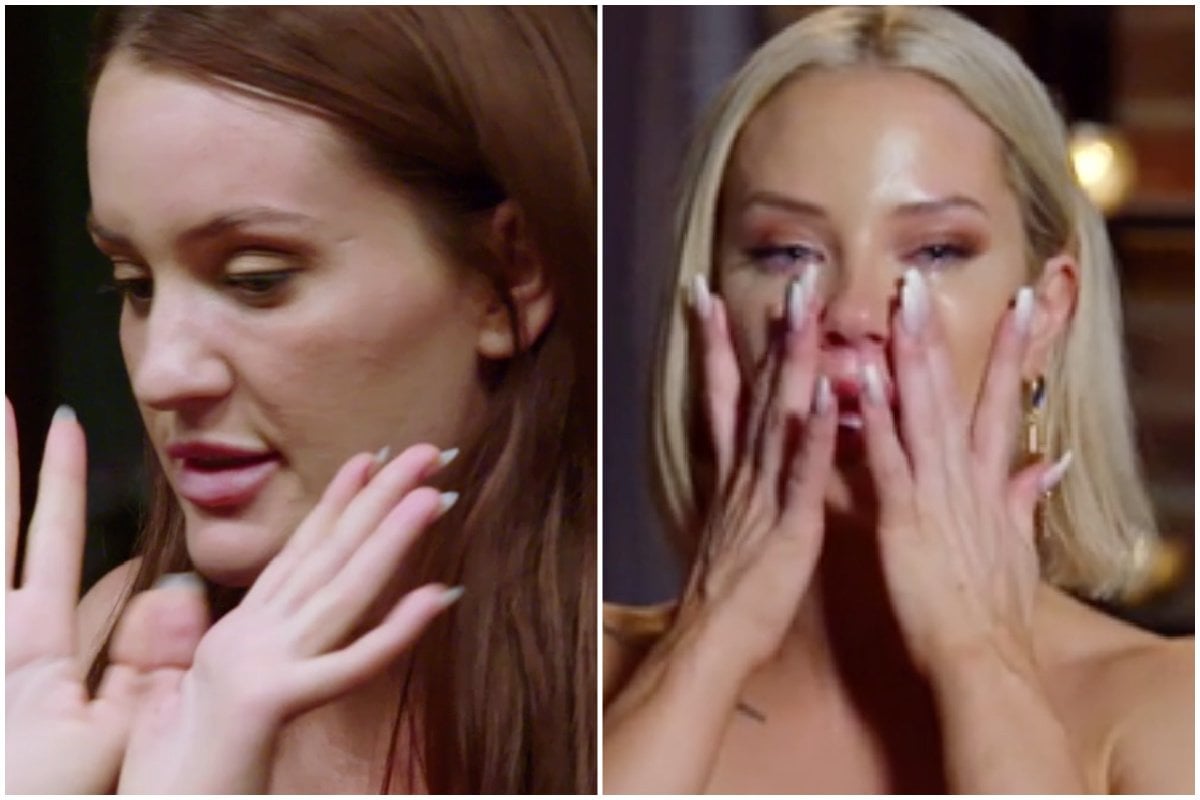 It's Sunday and there are no more sleeps left until the Married at First Sight reunion do you understand.

Cyrell has been yelling in the ads about how 'the good thing about a reunion is that you CAN'T HIDE BEHIND UR INSTAGRAM' and omg so true. Jessika Power has been crying a lot and NO we don't know who invited Nasser. Tracey is pregnant and Dean Wells has taken time off his YouTube channel to be here and whoever came up with this idea honestly deserves a Nobel Peace Prize. Nothing has been OK in literally 12 months, up until this precise moment.

We open with an introduction to a number of former contestants and first of all where the f**k is Hayley.

They try to distract us with a series of flashbacks to several past seasons which are entirely unnecessary because we were never not there.

Martha and Michael tell us how well their relationship is going, and it becomes clear that Martha has gone full Kim Kardashian and has made Michael into her Kanye and we don't hate it. In fact... we very much respect it.

We then cut to Dean thinking about the time he rapped for Tracey (his lil lady) then had an 'affair' with Davina and then tried to get back with Tracey but she dumped him on top of a sewage tank. 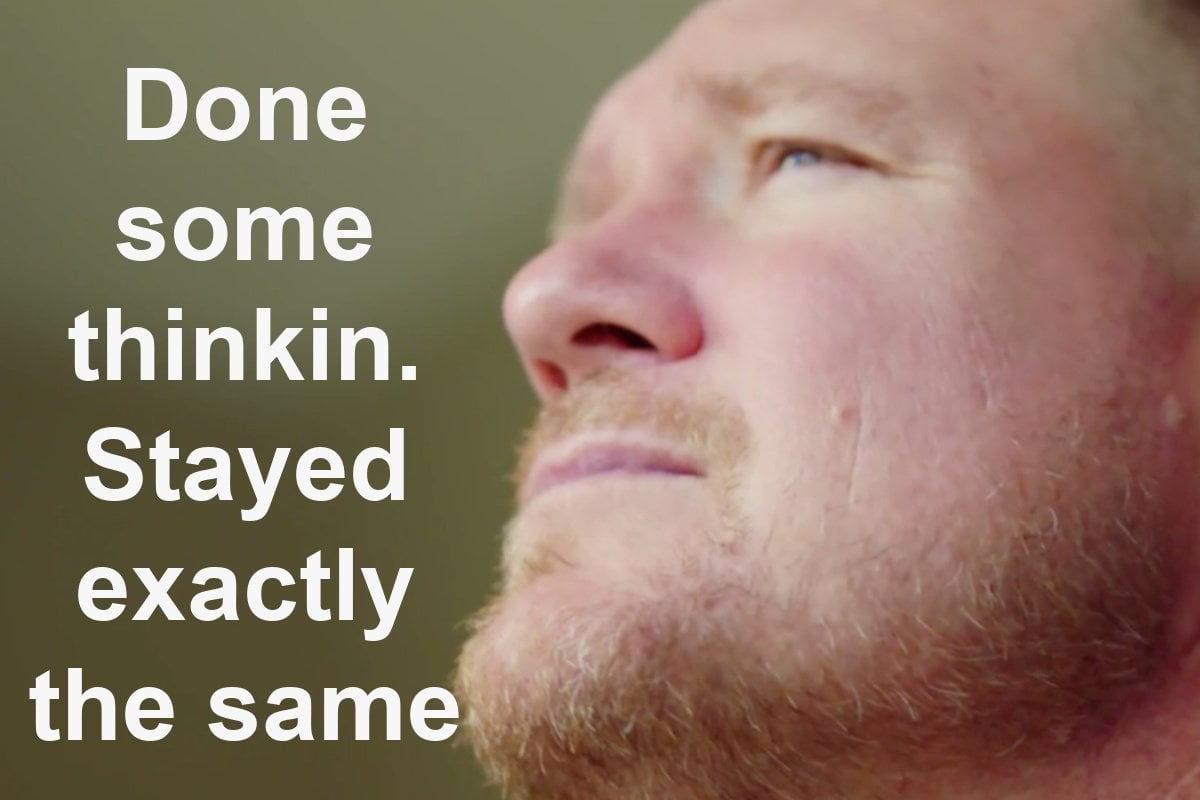 BUT HUSH IT'S TROY and we're shown flashes of him aggressively brushing his teeth, which feels like bullying. 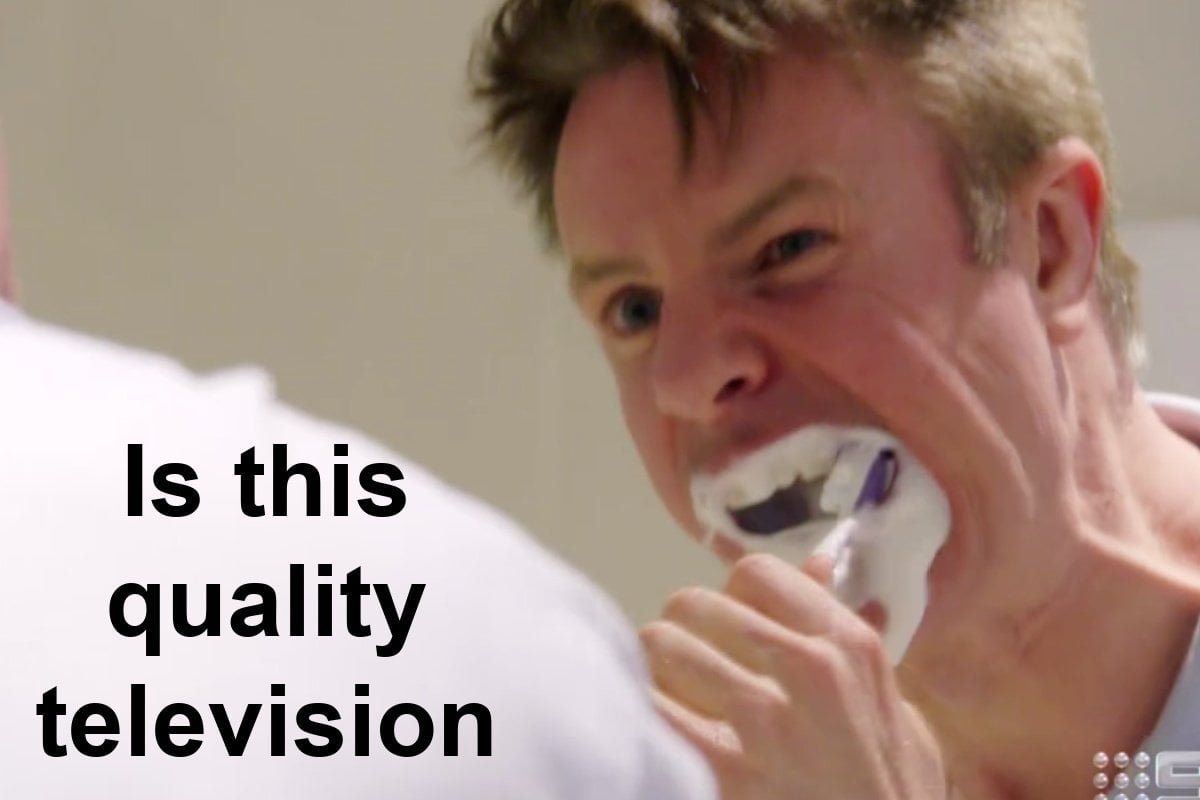 Before long, we learn that there is one person no one wants to see.

We assume it's because of the time Nasser got possessed halfway through the experiment and turned into a demon, but apparently there's more to it.

ET music starts playing and we learn that apparently Nasser:

a) trolls everyone on Instagram through at least six different accounts

b) lies about everyone in the press

c) will do anything for the cameras

d) and yeah the fact he got possessed gets brought up 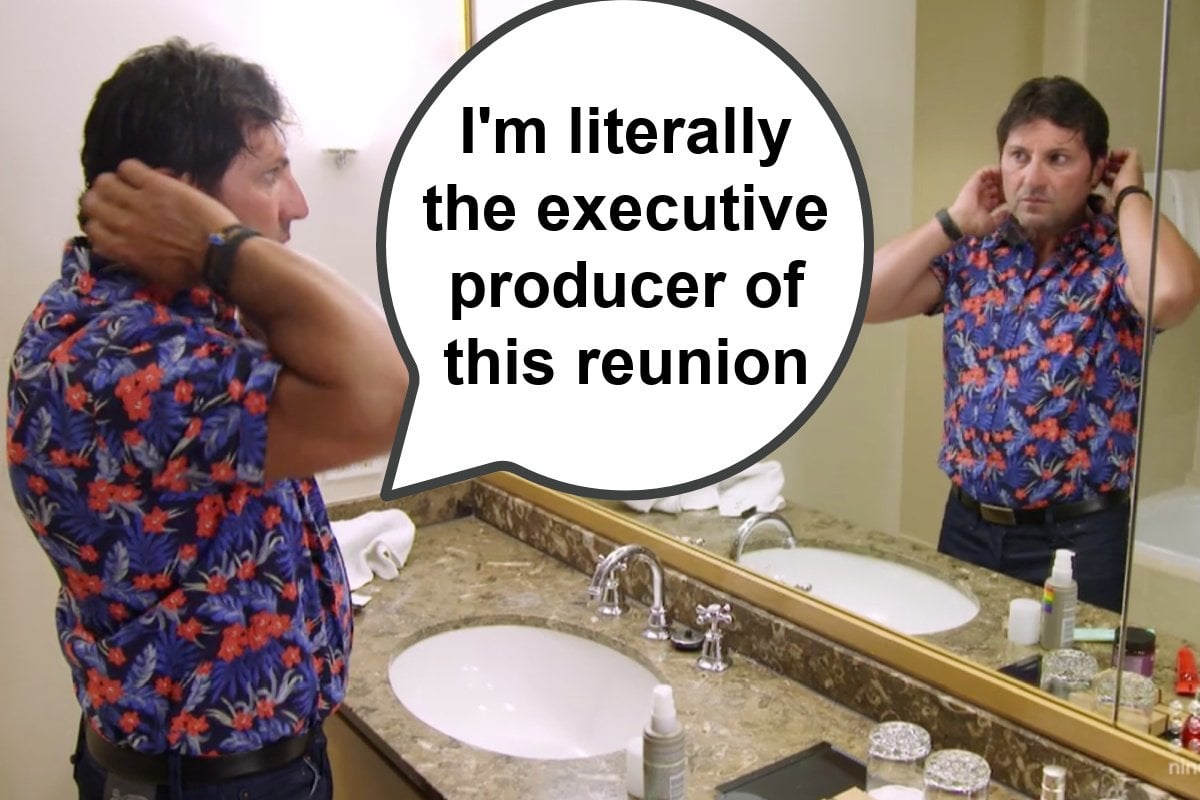 Ask any of my six Instagram profiles they'll tell you

We cut to more contestants but like TAKE US TO THE FKN PARTY ALREADY WE NEVER FORGOT ABOUT THESE PEOPLE WE LITERALLY FOLLOW THEM ALL ON INSTAGRAM.

But Cyrell has something she'd like to say before we go to dinner.

Since her season, Cyrell (née Cyclone Cyrell), has had a little baby boy and she (basically) would like us to know that just because she's a mum doesn't mean she's not gonna hit a bitch. It's the 21st century, and women didn't march in the street so that Cyrell had to stop throwing fruit bowls once she became a mum?

We FINALLY arrive at the dinner party and guests start filtering in.

You see, there's something missing.

And, yes. It's expert Trish.

And then a f**n empty chair. 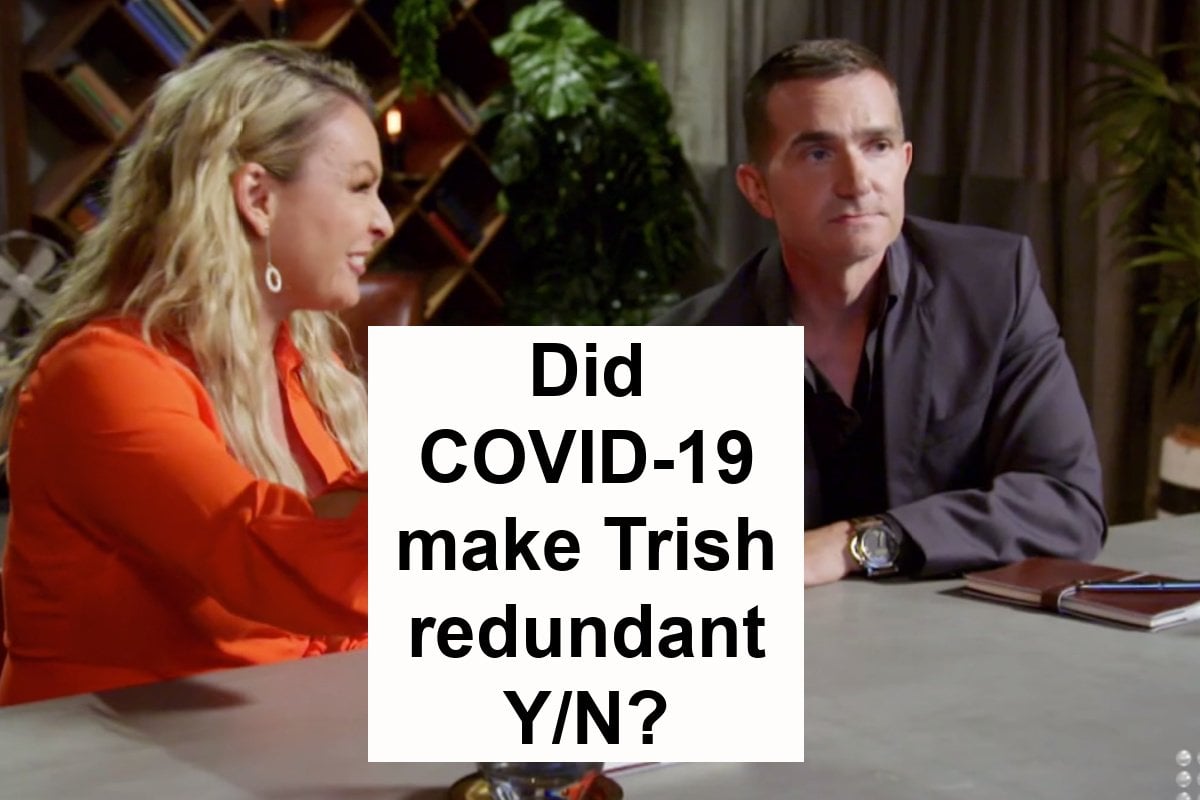 Meanwhile, Cyrell is yelling "ONE THING I WILL TELL YOU IS I DON'T FEEL FEAR" as she walks in and sweetie you need to get that checked out.

Apparently Nasser had opinions about Cyrell's pregnancy (like... what?) and when people ask... why... he simply declares: "I rest my case."

People keep arriving and we're yelling because it's actually too much.

Jessika Power arrives and along with the rest of the cast, it appears she's spent the last few years sh*t talking on Instagram which is a noble and surprisingly profitable career choice.

Speaking of talking sh*t about other people, Ines arrives. She has precisely no idea who anyone is. She keeps declaring "no one from my season is here" even though Lizzie is sitting right there and Ines mate you slept with her husband. 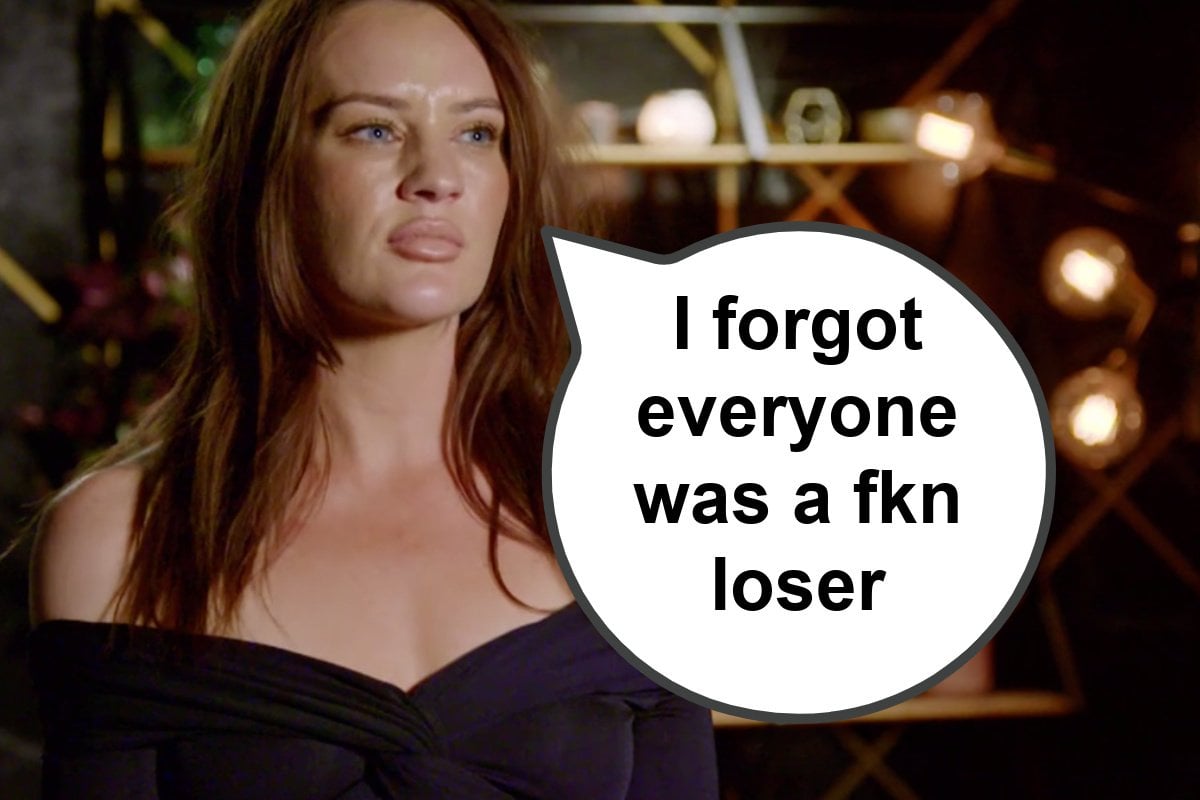 Remind me 4 next time.

But there's one person who has just noticed Jessika's arrival.

"I don't stand up for trash," Cyrell mutters and yes darling that's the spirit. 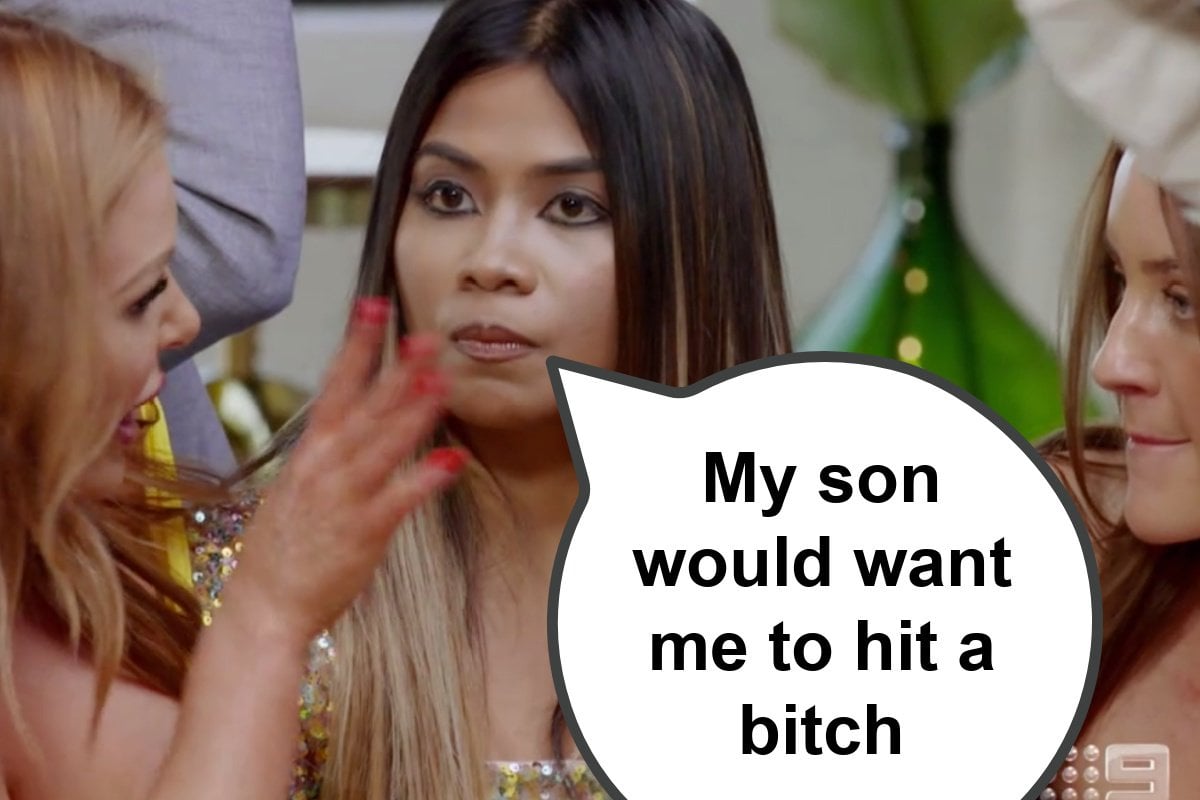 Once everyone has arrived, a man announces that "DINNER IS SERVED" and Nasser takes that as his hint that it's time to deliver his pre-prepared speech.

No one listens to a single word he says because of the time he trolled each and every one of them on Instagram through all of his six Instagram accounts.

Sarah Rosa declares he fat-shamed her.

Ryan declares he told everyone that he was homeless which really is quite rude.

Cyrell yells "YOU SAID MY SON WAS BORN OUT OF PUBLICITY" and Nasser is horrified but also offended by his own comment because it's so cruel. 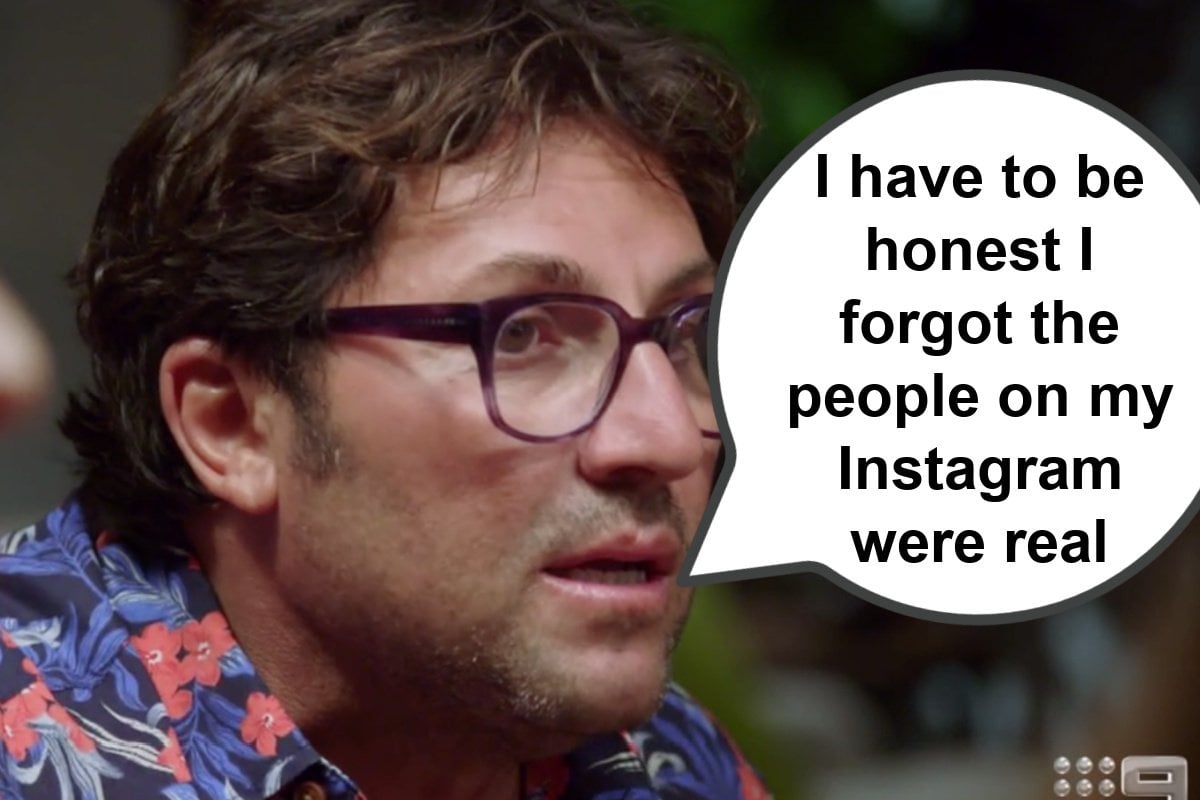 It very quickly turns into a Nasser intervention and we're certainly here for it.

Choosing to hang out with people you've publicly and openly trolled was an interesting choice. And Nasser, with respect, you probably shouldn't have... come.

It's at this point, before entrees, that Nasser who refers to himself as "the people's celebrity", exits the dinner party never to be seen again.

After his departure, everyone keeps randomly making up even though they definitely said mean sh*t about each other in interviews to the Daily Mail like three weeks ago. 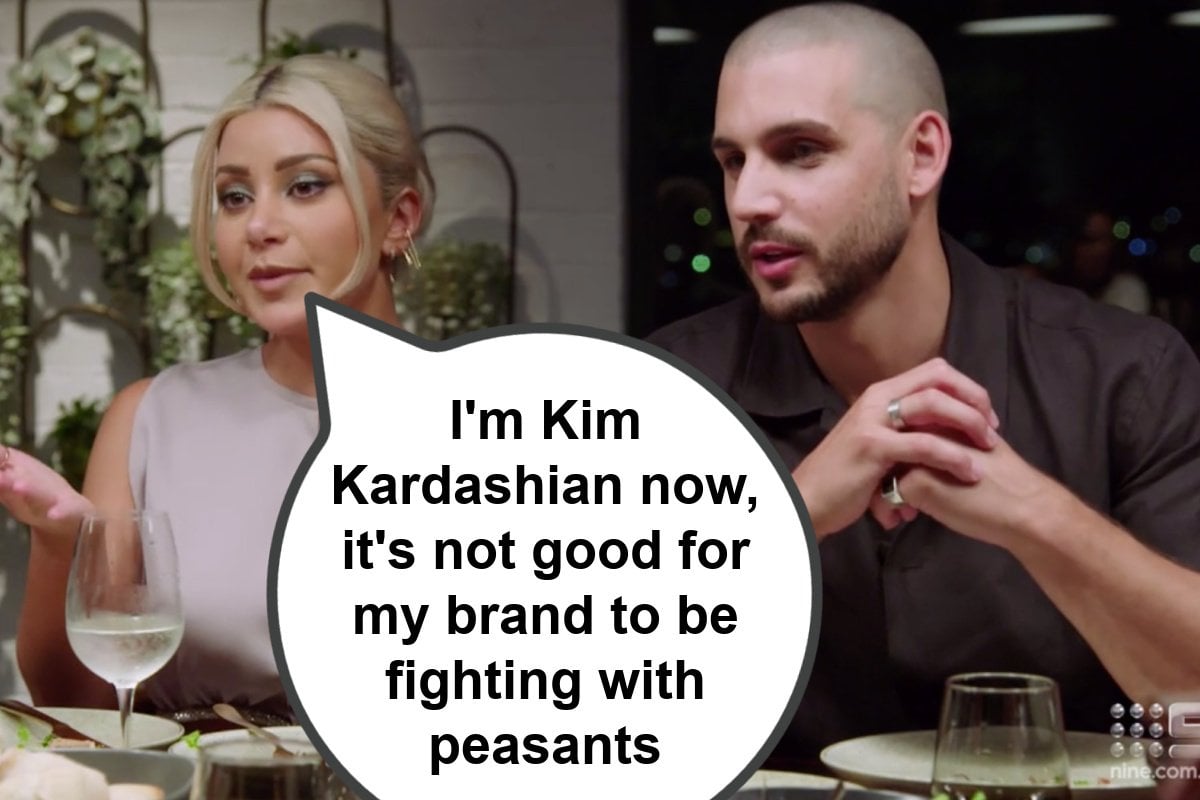 They call me Kartha Kardashian.

"There's a great vibe among everyone," Troy says, certain it will continue, and if that were the case then something tells us this reunion wouldn't be split into multiple episodes??

But Cyrell has had enough.

Like us, she's not here for a free meal and some polite conversation.

She's here to, and we quote, "confront people" AND THANK GOD YOU ARE CYRELL. 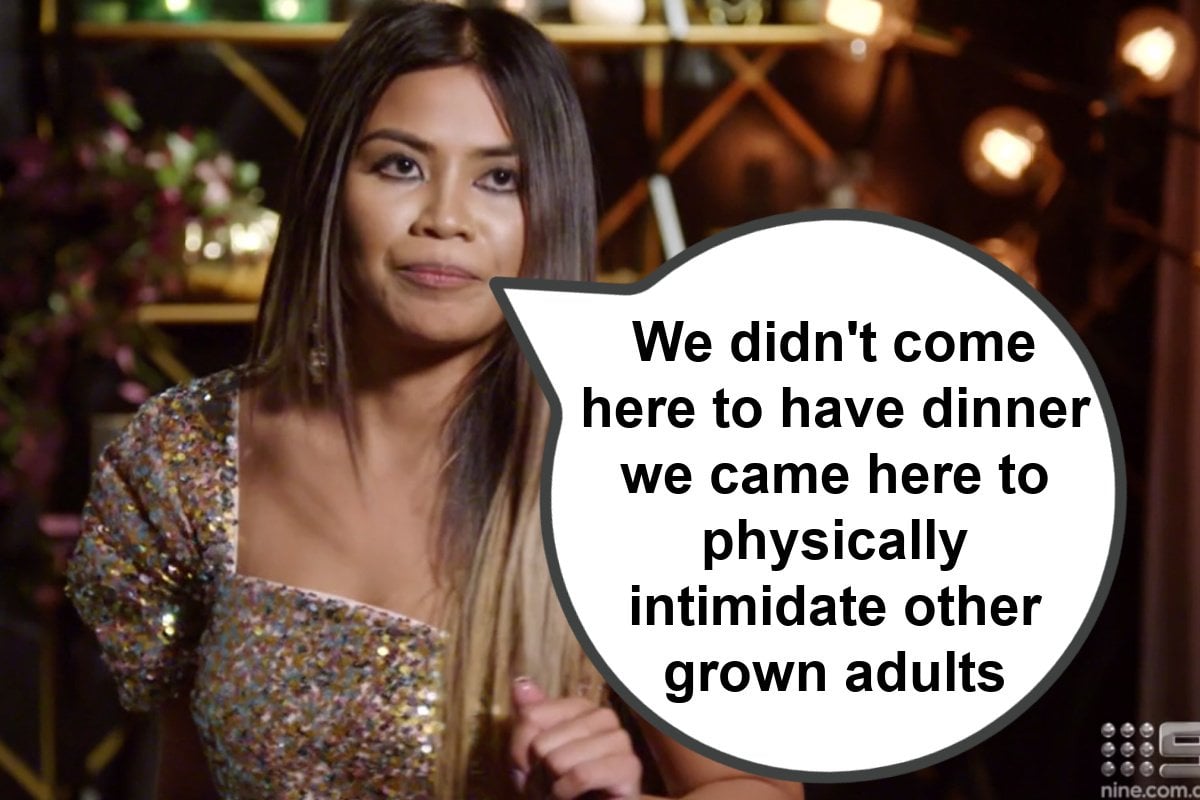 She then descends into referring to herself in the third person (Cyclone Cyrell) before extending the metaphor with "there's going to be thunder tonight".

That isn't. An ordinary. Part of a cyclone. But we think. She's warning us. About an upcoming weather event.

It's fkn coming u just don't know who it'll hit.

Because Dean is talking about the bible, and Ines doesn't understand.

Dean insists that he is.

"U have priest vibes," she concludes before moving on.

Expert Mel remarks that it's interesting how this show has affected the course of people's lives and DEAN LITERALLY HAD TO TURN TO GOD.

But expert John has noticed that Cyrell is... circling the table. 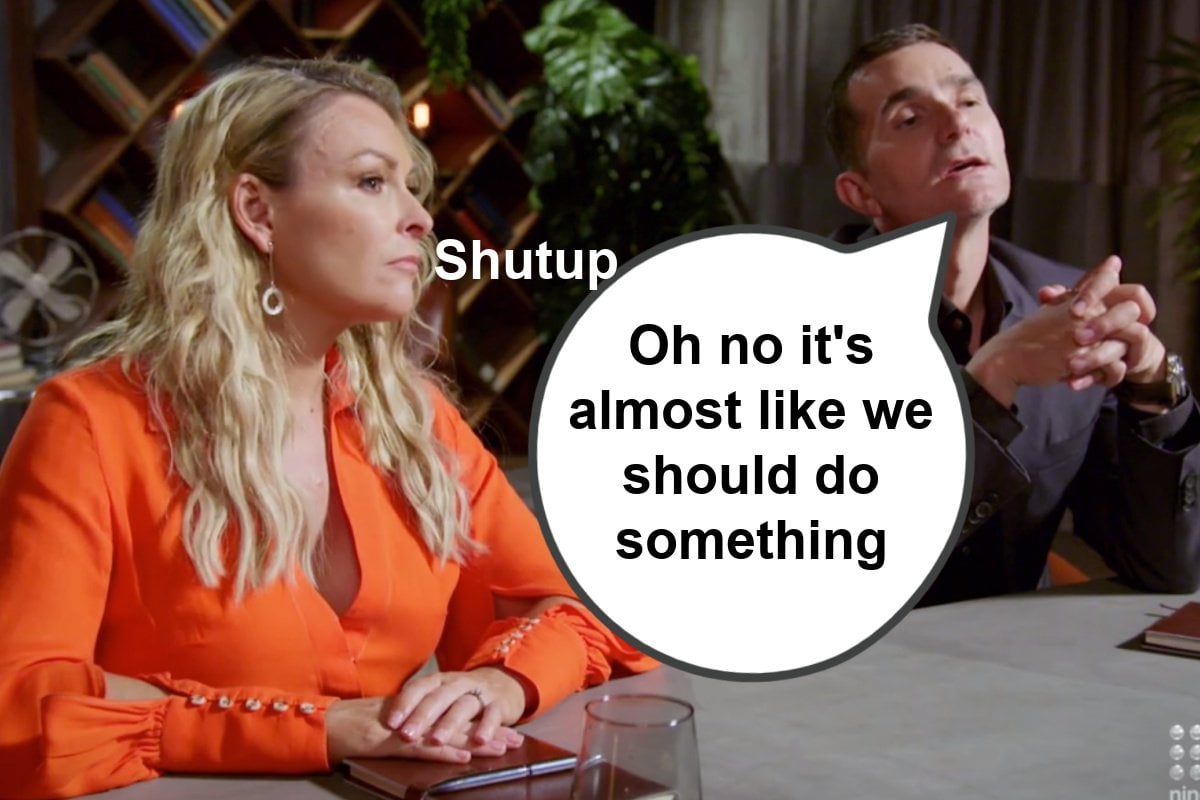 "I just want to confront you about certain issues that pissed me off," Cyrell says to Jessika, maturely.

It seems like a long bow but we'll allow it.

She says she's defending her family and no one fully understands what's going on until...

So Cyrell has thrown a (full) glass of what appears to be sauvignon blanc on Jessika's white dress and how is this legal.

Everyone is disappointed in Cyrell, except her brand new friend Ines, who honestly thinks it was pretty ballsy. 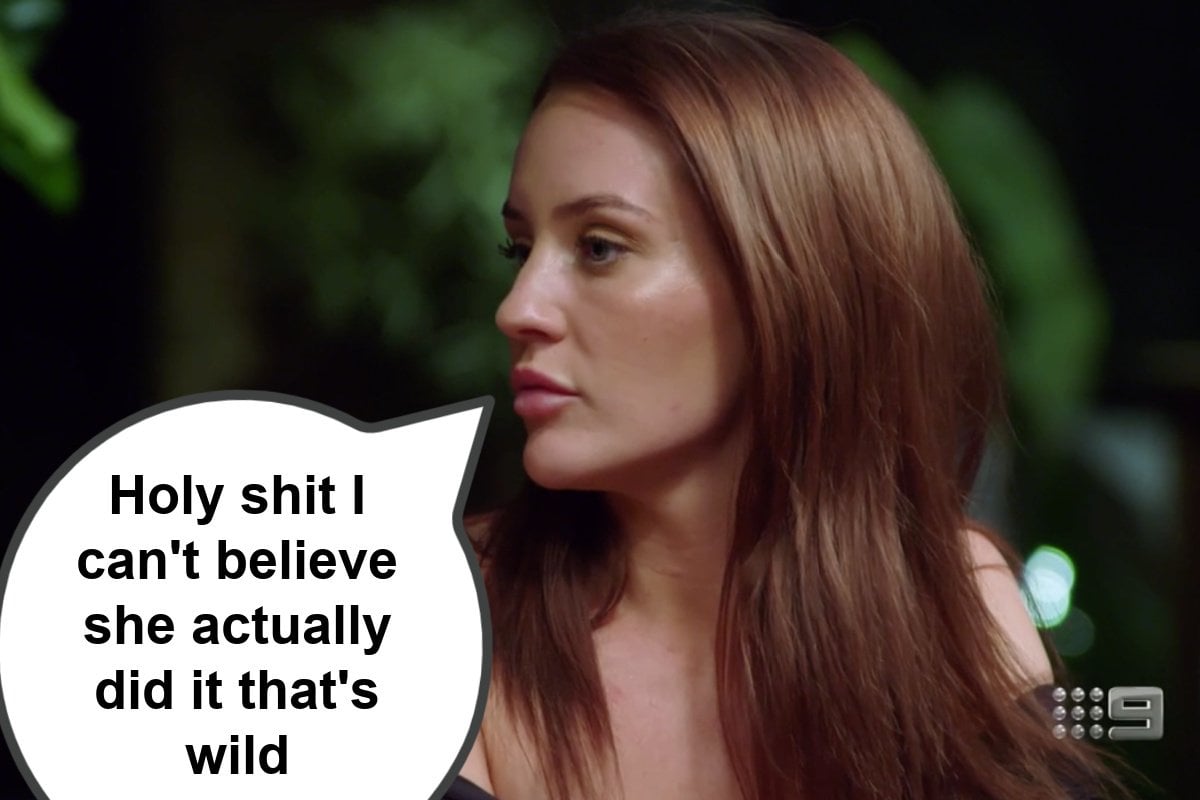 While everyone is repeating that throwing a drink at someone is really inappropriate, they've never seen someone behave that way bla bla bla bla, Cyrell mutters that it's probably time she goes home to her partner and child.

But don't worry because obviously everyone's coming back tomorrow night which is a) unnecessary, and b) an objectively terrible idea.

WE'LL SEE YOU THEN.

Read Monday night's recap of Married at First Sight, where things get even more out of control, right here: The Twins recap the MAFS reunion: A wildly inappropriate storm out.