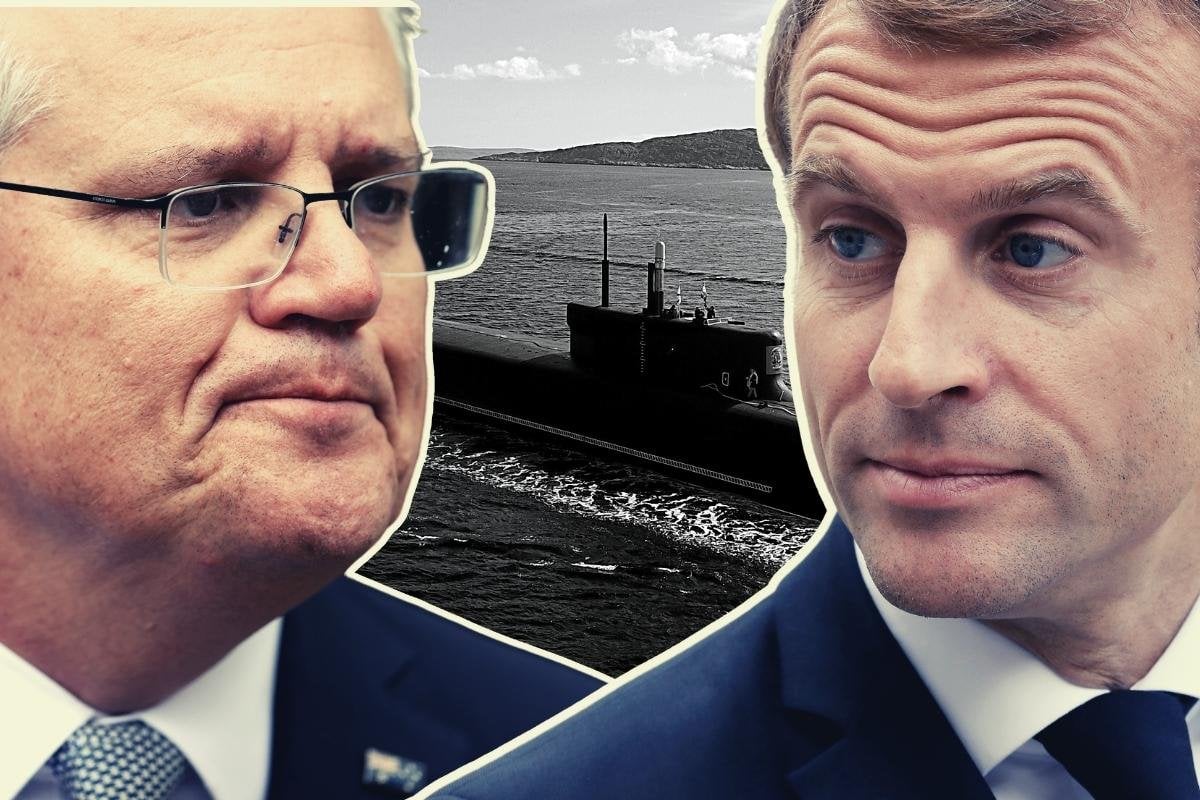 Over the past week, world leaders have been embedded in the COP26 climate summit in Glasgow, negotiating on how to tackle the most pressing crisis of our time.

But as critical deals were struck over methane reduction, an entirely unrelated political drama threatened to distract from proceedings.

Prodded by international media, Australian Prime Minister Scott Morrison and French President Emmanuel Macron became engaged in a headline-making game of 'he said, he said' over the recent collapse of a multi-billion dollar submarine deal between the two countries.

You remember the one. Australia agreed to buy $90bn worth of diesel submarines, then come September reneged in favour of flashier nuclear-powered versions offered by the United States. France claimed they were blindsided by the announcement and were so furieux that they withdrew their ambassadors from the two countries in protest.

Well, with the two leaders in the same country for the first time since the collapsed deal, tensions fired up again. There were accusations of fibbing, counter-accusations of sledging, and a leaked text message that, well, sort of backfired.

Here's how it all unfolded, starting with...

Events like COP26 present a unique opportunity for the world's media to get up close with the world's decision-makers. Rather than jumping through press-secretary hoops, they can jog alongside the likes of President Emmanuel Macron and ask, say, whether he thought Prime Minister Scott Morrison had lied to him in the process of scrapping their subs deal.

Which is precisely what Fairfax reporter Bevan Shields did.

I ask French President Emmanuel Macron whether Scott Morrison lied to him: “I don’t think, I know.” pic.twitter.com/3tcg4xrl90

He does. Morrison told reporters in Glasgow (where he was attending the COP26 climate summit) that he had dinner with Macron in June during which he flagged that the French subs weren't suitable.

"At that point, I made it very clear that a conventional diesel-powered submarine was not going to meet Australia’s strategic requirements. We discussed that candidly," Morrison said.

"I did not discuss what other alternatives we were looking at. They were in confidence, and they were subject to the security arrangements we had about those other discussions."

Morrison said he wasn't going to "cop" any suggestion that he'd deliberately misled Macron and the French government.

Okay, so where does the leaked text message come into all this?

On Monday, after Macron's "I don't think; I know" comment, someone leaked a text from Macron to Morrison, hoping to back Morrison's claims that his French counterpart knew the deal was under threat.

According to The Financial Review, days before the AKUS announcement, Morrison was attempting to set up a phone call with Macron to inform him about scrapping their agreement. During that process, the Frenchman sent a message that read: "Should I expect good or bad news for our joint submarines ambitions?"

Only, the phone conversation never eventuated.

A French official told local newspaper Le Parisien that only one phone call had come through from the Prime Minister's office at 11am on a Wednesday – when Macron was in his weekly cabinet meeting.

"It is difficult to believe that the Australian Prime Minister has not been advised of this constraint," the official said. "He knew very well the president was unavailable."

And so, the Australian-American announcement went ahead two days later, apparently with the French none the wiser.

Listen to this episode of The Quicky, discussing Australia's questionable stance on climate change. Post continues after podcast.

Asked if he was behind the text message leak, Prime Minister Morrison declined to be drawn, telling media he wouldn't "indulge your editorial on that".

"What I will simply say is this: We were contacted when we were trying to set up the call.

"[The French President] made it pretty clear he was concerned that this would be a phone call that could result in a decision by Australia not to proceed."

But the French were more than happy to make their suspicions about the leak clear.

According to Le Parisien, the President's advisors explicitly blamed the leak on Morrison's office, adding, "Disclosing the SMS of an exchange between heads of state or government is a rather crude and peculiar method."

Macron is not the only one accusing the PM of deception.

Former Prime Minister Malcolm Turnbull on Tuesday made clear his feelings about his former Liberal colleague's conduct. Or "shocking conduct", as he put it.

Turnbull said that Morrison had a history of deception and had lied to him personally "on many occasions", but said "when you do it at an international level it has much graver ramifications".

"Morrison created the impression to the French that everything was going ahead at the same time he was planning to pull the plug if he got a better deal," Turnbull told The Sydney Morning Herald.

"That would be regarded as sharp practice in the property development sector, let alone between nations."

The Americans also pointed the finger at Australia, distancing themselves from any supposed deception.

"To use an English phrase, what we did was clumsy. It was not done with a lot of grace," US President Joe Biden told Macron during a meeting at the G20 summit in Rome last week.

"I was under the impression that France had been informed long before that the deal was not going through. I, honest to God, did not know you had not been."