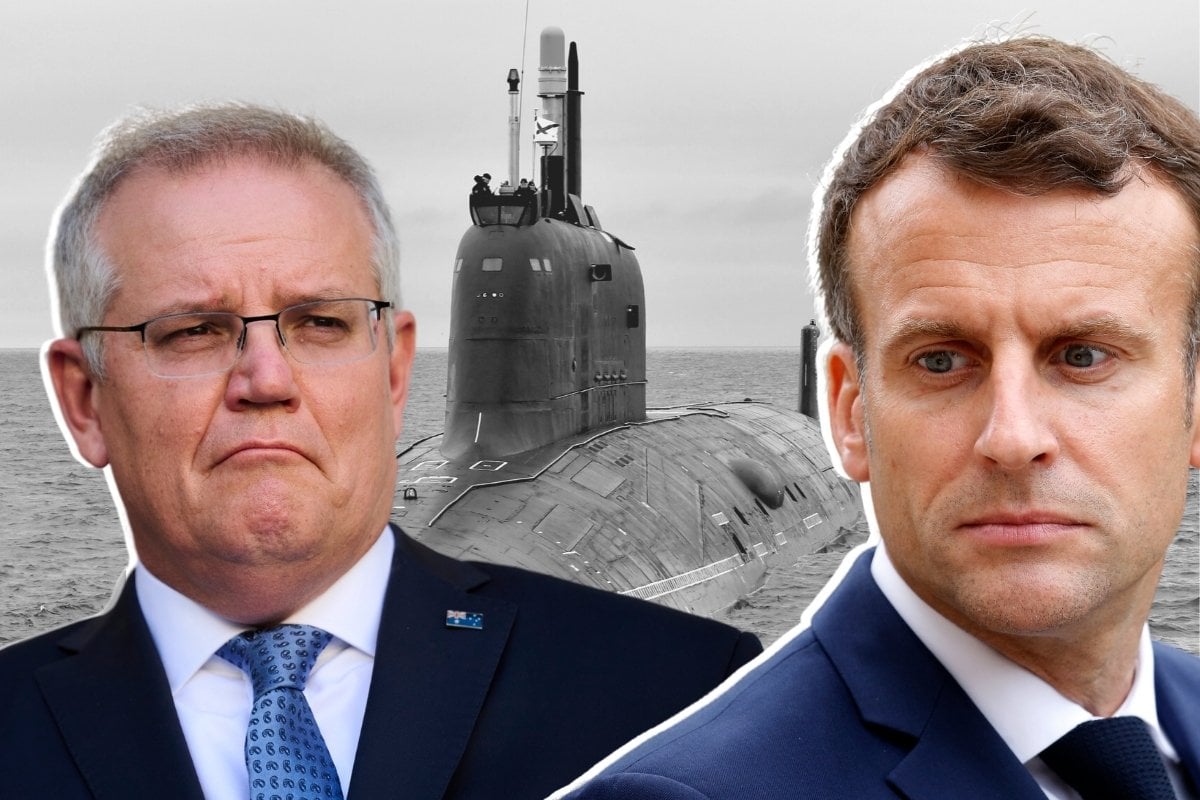 France is très furieux with Australia right now. Its leaders are publicly tearing into ours, and President Emmanuel Macron has even recalled the French ambassador from Canberra — a highly unusual move among allied nations.

The diplomatic dispute comes after Australia reneged on a $90 billion deal to buy conventional French submarines, opting instead to strike an arrangement with the USA for their nuclear-powered version.

The new US deal was announced in a joint press conference held by Prime Minister Scott Morrison, US President Joe Biden and UK Prime Minister Boris Johnson on Thursday morning, as they unveiled a new strategic and military alliance called AUKUS.

It came as a shock to most. The deal had not been debated in the Australian parliament, and several national security experts have said they had no idea it was coming.

Even the French ambassador only learned Australia had torn up its agreement via the media, which has only stoked fury further.

"We were deliberately ignored," he told the ABC, "and you can realise how deep we feel about such a thing."

Can’t quite believe I’m writing this, but:
France is recalling its ambassador to the US and to Australia over submarine deal and #AUKUS agreement.
For such close allies, this is an extraordinary step

Describing the move as a "stab in the back", the country's Foreign Minister, Jean-Yves Le Drian, said, "We created a relationship of trust with Australia and that trust has been broken."

So why is this such a big deal? What does it mean for our relationship with France, and with the United States? And why do we need submarines in the first place?

Start from the beginning. Why is Australia spending billions on submarines right now?

China's economic, military and political influence has risen at a staggering rate in recent decades. There are concerns from other superpowers about Beijing's efforts to modernise its nuclear capabilities, its intimidation of Australia and Japan, and about its involvement in contested territories in the South China Sea.

In the AUKUS announcement, for example, the three leaders spoke specifically of the need to "help sustain peace and stability in the Indo-Pacific region" — a thinly veiled nod to countering China's rapidly expanding influence over this part of the world.

What was the original deal Australia struck with France?

The formal agreement was signed in 2019, and the first sub was due to be operational in 2034, with one boat to follow every two years after that.

The submarines were to be built in Adelaide with 90 per cent Australian input, equivalent to 2,800 local jobs. Although, much to the Australian Government's frustrations, that figure was later was whittled down to 60 per cent.

In the years since, Australia's projected bill also blew out to $90 billion, not including maintenance costs which were estimated to total a further $145 billion over the life of the boats.

What's different about the US deal?

The US has agreed to share its nuclear propulsion technology with Australia so that we can build our first fleet of nuclear-powered submarines. Again, construction will take place in Adelaide, and Prime Minister Morrison said the boats will likely be operational around 2040.

Advocates argue it will be worth the wait. These nuclear subs can stay submerged for longer, are quieter and harder to detect. This makes them better suited to traversing the vast distances of the Indo-Pacific.

The first initiative under #AUKUS is the delivery of nuclear-powered submarines for the @Australian_Navy. This will allow @DeptDefence to meet its mission to protect Australia and its national interests, and that of our regional friends, into the future. #AUKUS pic.twitter.com/CYF05qJqPZ

(Important side note: while the submarines are powered by nuclear reactors, they won't carry nuclear weapons. Prime Minister Morrison has stressed, "Australia is not seeking to acquire nuclear weapons or establish a civil nuclear capability.")

Preparations and planning for these subs will take 18 months.

So why is Australia choosing the US deal such a big... well, deal?

Australia will now become just the seventh nation on the planet to possess nuclear-powered submarines, alongside India, China, Russia, US, UK and France.

Prior to this, the United States has only ever shared its nuclear propulsion technology with the UK, so this is seen as a big leap for Australia's place on the world stage (militarily speaking, anyway).

It means we will become even more tightly wound up in our relationship with the US, and should the States become embroiled in conflict in the region Australia's involvement is now all but assured.

But it also means that Australia's diplomatic relationship with France has taken a monumental hit — and that could have significant consequences.

The world is a jungle. France has just been reminded this bitter truth by the way the US and the UK have stabbed her in the back in Australia. C’est la vie.

Australia is currently in the process of renegotiating free trade agreements with the EU (our third-largest trading partner), and European Affairs Minister Clement Beaune seemed to suggest the outcome may be impacted: "I don't see how we can trust our Australian partners," he told France 24.

The Federal Government will also have to answer to the Australian taxpayer, with $2.4 billion already spent on the now ripped-up French deal and a hefty cancellation bill likely to follow.

Opposition Leader Anthony Albanese provided conditional support for the new deal, but said more transparency was needed over the price of the transition.

Time will tell whether taking 'the nuclear option' proves to be the right one.

S
susan.v.miles a month ago

Reply
Upvote
Boys and their toys! Seriously of all the things we need right now in Australia-is a whiz bang new set of submarines the thing!?!?!? 😢😢😢
G
guest2 a month ago

Reply
Upvote
2 upvotes
@susan.v.miles  It is easy to dismiss Australia's national security as 'toys for the boys', but the reality isn't quite so glib.
C
cat a month ago

Reply
Upvote
1 upvotes
@susan.v.miles amazing how they never have a problem paying for weapons, but its too expensive to act on climate change, by far the greatest threat to the life and security of everyone in the country.
M
michael a month ago

Reply
Upvote
@susan.v.miles go and read the globaltimes website. Its the Chinese news strait from the CCP.
They basically consider the entire planet to be "a part of china"
They are not our friends.
M
michael a month ago