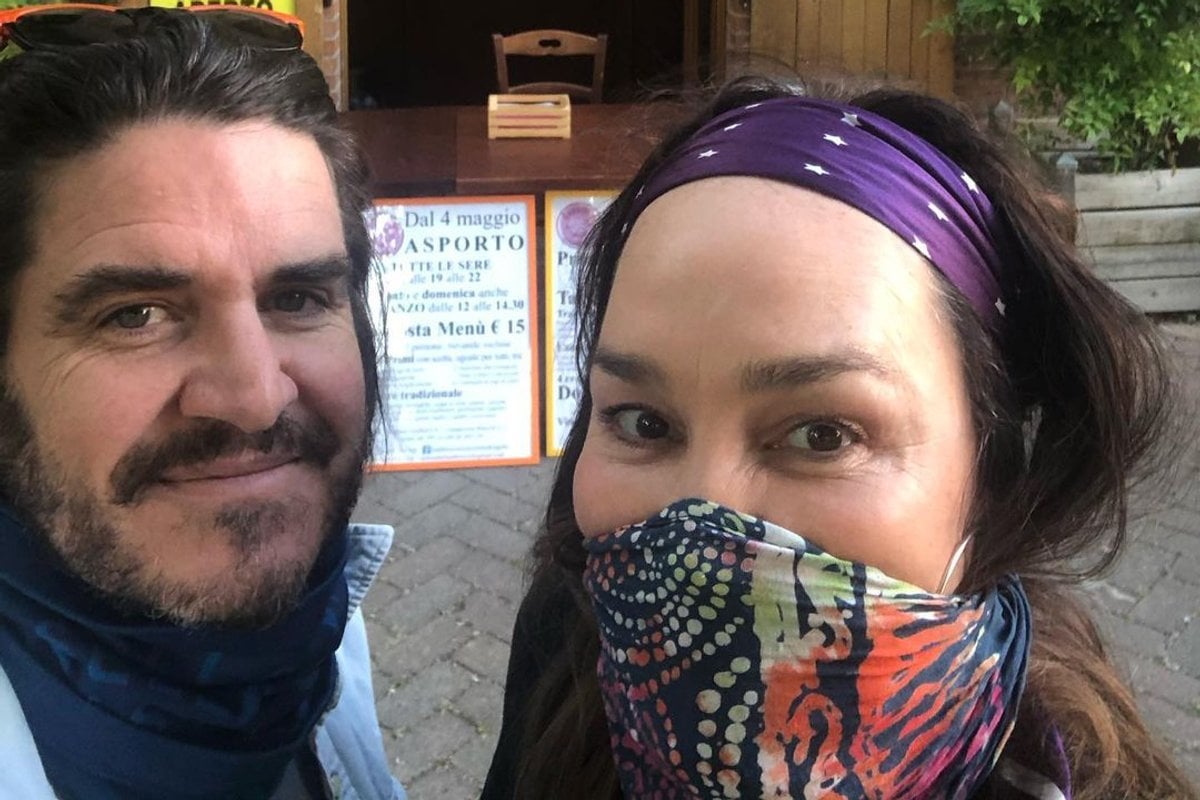 Kate Langbroek has had a year like no other.

The radio presenter, who recently joined her new co-hosts Monty Diamond and Yumi Stynes on KIIS FM's 3PM Pick Up, spent much of 2020 in lockdown in Italy.

Langbroek and her husband, Peter Allen Lewis, initially relocated to Bologna, Italy in January 2019 with their four children.

"It's really hard to talk about Italy without turning to cliches," the 55-year-old told Mamamia.

"It's just beautiful. It's exactly like what people imagine – ancient buildings and little lanes and dressing up and eating gelato and drinking Aperol Spritz and jumping off cliffs into aquamarine waters. I mean, that is Italy."

Watch the trailer for What The Hell Just Happened? below. Post continues after video.

As the COVID-19 pandemic hit, Italy became one of the first countries in the world to enter a nationwide lockdown.

"It was very frightening at the start, as it was for everyone around the world, because we were the first country that was hit besides China," Langbroek recalled.

"And because there's six of us in our family, I was really worried about food. You suddenly realise how vulnerable you are in cities. You rely on turning a tap and water coming out, you rely on going to the supermarket. So that was a bit of a 'gulp' moment for me," she continued.

"But once I realised that those basic systems were still working, I sort of emotionally pivoted and thought, 'What's the point of resisting this? I have no control over it.'"

For four long months, Langbroek and her family were holed up together amid Italy's strict lockdown.

But while it certainly came with its challenges, the family of six grew stronger.

"[Everyone is normally at] school or work. But when all of that is taken away, and it's just the six of you, you get to know each other pretty well," she added.

"And I still maintain that no one has spent as much time with their spouse as I have spent with my husband."

While Langbroek and her family enjoyed a typical Italian summer after restrictions eased mid last year, they were inevitably plunged into a second lockdown once the weather cooled down.

Then, like thousands of other Australians, the family of six faced the challenge of returning home.

"There's a lot less certainty in our lives now. There's a sort of feeling like we're always waiting for the other shoe to drop," Langbroek said.

"What's happened recently in Queensland and Byron Bay is a classic example of that. You just have to try to prepare yourself psychologically for the rug to be pulled, but I don't know that humans are very good at that.

"When we were trying to travel back to Australia, we were prepared at every stage for that plane not to leave, or to not be allowed back into Australia. But it's hard to live like that. When we got the message that our first flights [back to Australia] were cancelled, that was just a really, really, low day."

Eventually, Langbroek and her family made it back to Australia. But at first, returning to 'normal' life in Australia was overwhelming.

"We got out of quarantine on Christmas Day. Then we were just thrust back into a life where there was so much freedom," she said.

"But the freedom was really hard-fought in Australia. It didn't just come like a gift. Typically, in hard lockdown states like Victoria, people are still very fragile about what they endured. It was a very brutal time."

Now, after the rollercoaster year she had, Langbroek is the perfect candidate to narrate Channel Ten's new show, What The Hell Just Happened?

Starring 20 Australian celebrities, including Waleed Aly, Julie Bishop, Joel Creasey, and Julia Morris, the show will feature discussions and reflections on everything from life in lockdown to Cardi B's 'WAP' music video.

"I think it's a really good way to look back at the year. A lot of it is, 'Oh my goodness, I remember that.' It's a reminder of how far we've come, really," Langbroek said. 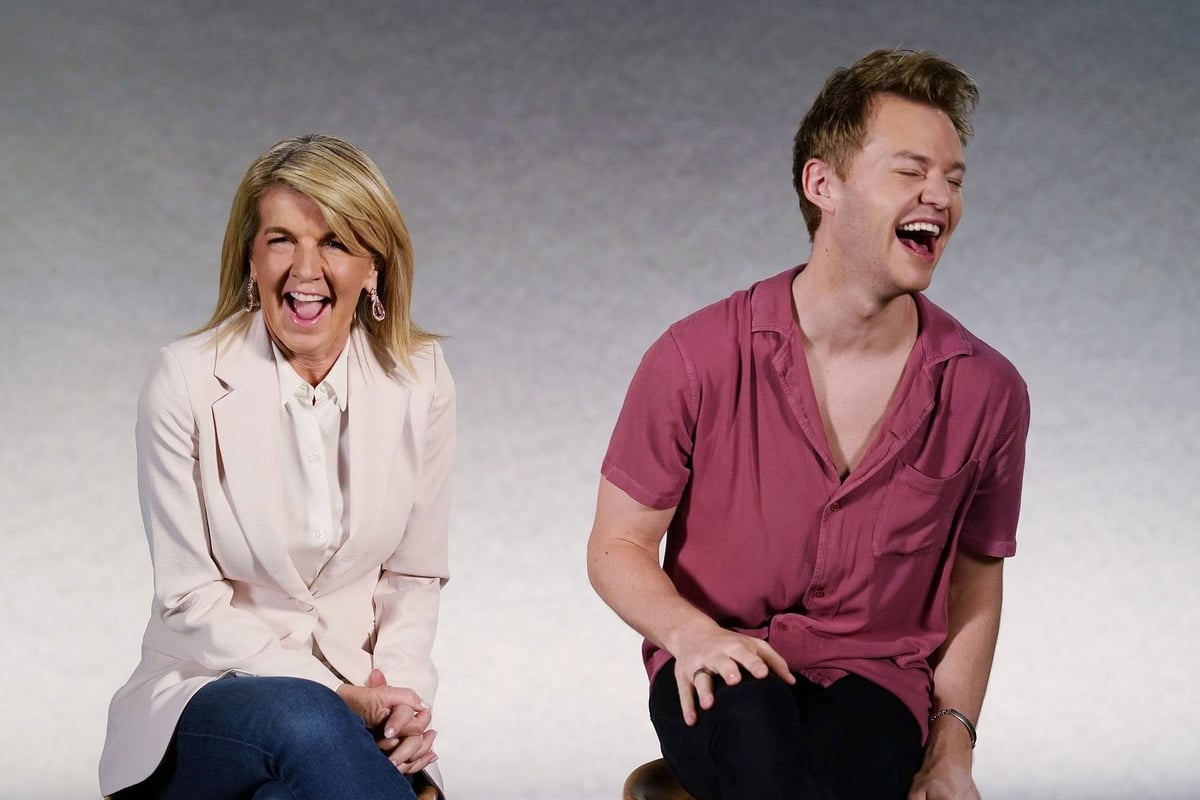 Julie Bishop and Joel Creasey on What The Hell Just Happened? Image: Channel 10. "The producers matched [the celebrities] up in a really unusual way on the show, and it's quite dynamic.

"Julie Bishop was a bit of a revelation, actually, particularly in the middle of [the show] when she does a headstand. She actually fully gets on the floor and just kicks her legs up. It's sort of a metaphor for the whole year. The curveball of 2020 has been summed up by seeing a former politician doing a headstand."

What The Hell Just Happened? premieres Monday, April 5 at 7.30pm on Channel 10.

M
maya a year ago

Reply
Upvote
Hmm, no thanks!  Not really interested in seeing how 'celebrities' coped with 2020 and have returned to their lives, their jobs and carrying on.  I'm still dealing with the fallout from 2020 in my life and my business has been decimated and this year is not turning out to be any better, other than I'm not in lockdown on top.  It's still very raw for so many people who have lost jobs, homes, businesses.
M
mamamia-user-482898552 a year ago

Reply
Upvote
@Maya It's not just those who have suffered directly as a result of the pandemic in this country. I think it's in incredibly poor taste, just bearing in mind how many people have died worldwide as a result of the virus - this is not an event which lends itself to a jokey "let's reminisce about the hilarious time we all couldn't buy toilet paper" TV programme.
G
girlie a year ago

Reply
Upvote
1 upvotes
I don't understand what is meant by "a year like no other" there are many people that had this exact same year.... Thousands of Australians are still trying to return home.
R
rush a year ago

Reply
Upvote
@girlie I assumed they meant like no other year they've had before, not a year like no one else has had. I hope that's what they meant, at least!
M
mamamia-user-482898552 a year ago