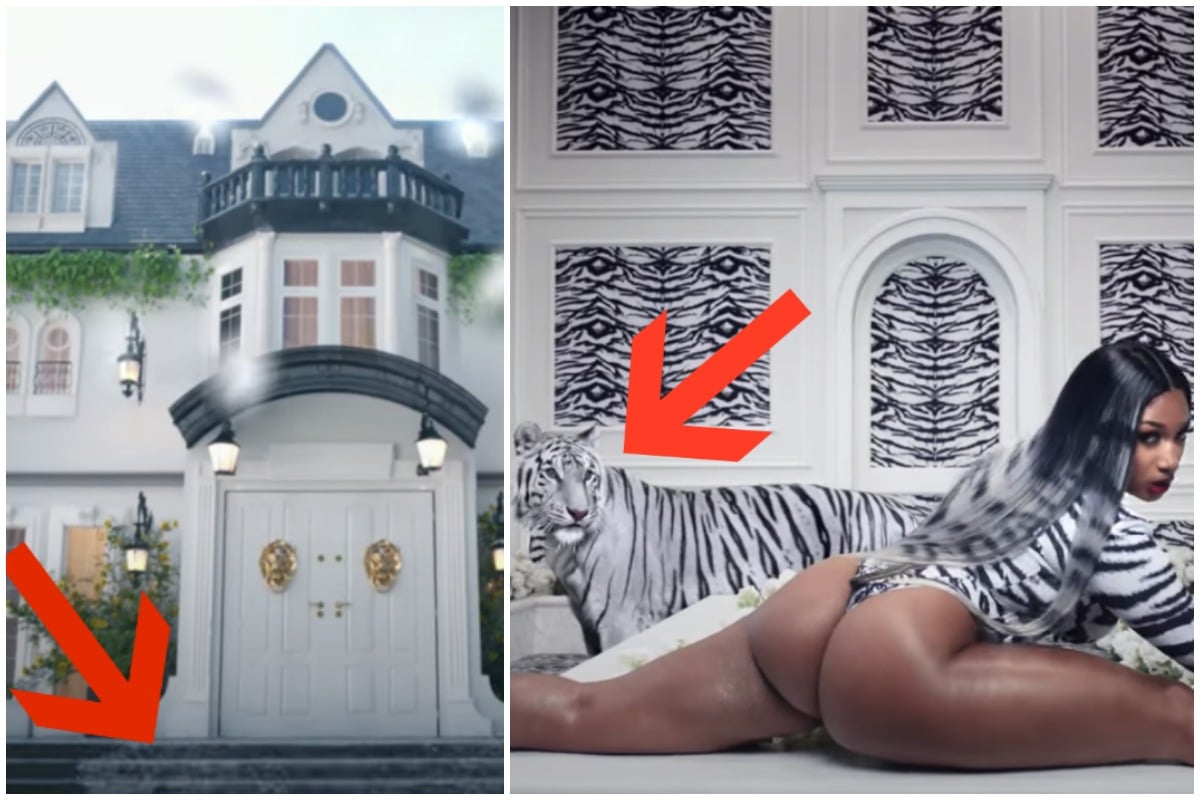 Just when you thought 2020 couldn't get any weirder, we now have people walking around singing 'THERE'S SOME WHORES IN THIS HOUSE' while bopping their heads and gyrating on their living room floor.

The conservatives are upset.

Even though the leader of the free world is a man who explicitly talked about "grabbing women by the p*ssy," they find it highly inappropriate that women would talk about the lubrication of their own vaginas, which is of course necessary for pleasurable intercourse but also the reproduction of our species.

If you have no idea what we're talking about (sorry), two female rappers, Cardi B and Megan Thee Stallion, have released a very catchy new song called 'Wet Ass Pussy'. The music video, released on Friday, has amassed more than 75 million views and a quarter of a million comments, some of which are prayers. To Jesus. Our Lord and Saviour.

Importantly, the YouTube version of the song has had to change the lyrics because apparently 'wet ass pussy' was too explicit, so instead the chorus just keeps repeating WET N GOOSHY and how is that any less intense.

The video can only be described as four minutes and 12 seconds of allusions to wet vaginas (ft. Kylie Jenner), so we thought it was important we recap it, just in case our Pop calls us and asks why the nice lady at his local cafe keeps muttering about the whores in her house.

We begin with a shot of two big gates opening, which we interpret as an allegory for vagina lips. Opening. For a penis. 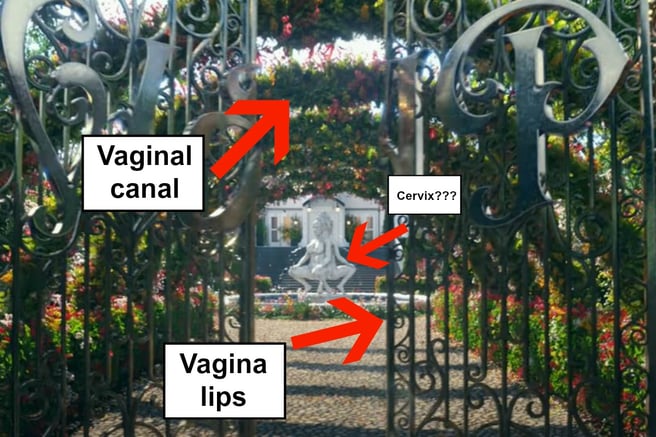 You might think we're reading too much into innocent imagery but idk the gates literally have 'WAP' (wet ass pussy) written on them so...

They represent a vagina.

As they open, the camera travels through a flower tunnel (the vaginal canal?) that leads to a fountain (cervix? No, we think the metaphor probably stops here) with two naked women crouched down back to back with water flowing from their... nipples.

It's at this point that there's a splash and yes, the camera has wet on it.

As the shot pans up a huge staircase, water can be seen leaking out of the mansion and THERE'S A FLOOD SOMEONE CALL WHOEVER DEALS WITH FLOODS. 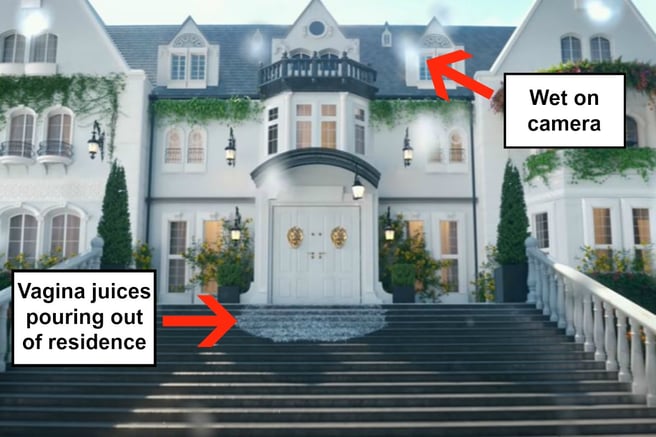 Inside, there's water all over the floor, which is a safety hazard, and Cardi B and Megan Thee Stallion emerge looking completely unfazed by the fact that there's clearly a leak somewhere and it's dangerous for them.

On the walls, gold statues of naked butts jiggle and statues of boobs leak water from the nipples and we don't see why the nipples specifically have to be wet but it's also fine.

As the two women walk down the Alice in Wonderland-esque hallway, they're both really happy and excited to be in the house, probably because there's tigers, whores etc.

They're smiling and laughing and honestly same. 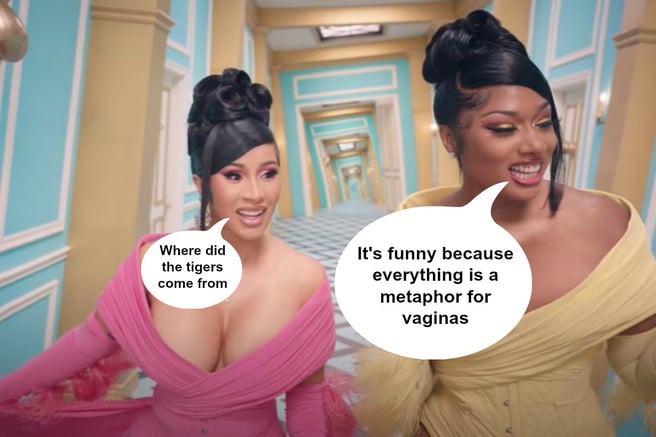 Maybe we shouldn't be running it'll startle them

It should be noted that at this point they're singing 'get a bucket and a mop for this wet wet wet,' but also 'put this cookie right in your face, swipe your nose like a credit card' and 1) a bucket and a mop isn't going to fix the gushing water coming from an unidentified source in this mansion, and 2) when you think about how many songs are about blow jobs, we are THRILLED to hear about a pussy in the face.

But stop pls because there's a gold statue of a snake that's alive and look we're not rocket scientists but we're think it's meant to be a dick.

Oh goodness. Now Cardi B and Megan Thee Stallion are covered in snakes and it's so many penises - big ones and small ones and fat ones and skinny ones. They're wriggling all over their bodies and the snakes are like 'excuse me fellow snake I thought I was the only sexy snake being featured in this video clip,' and it's all a bit tense. 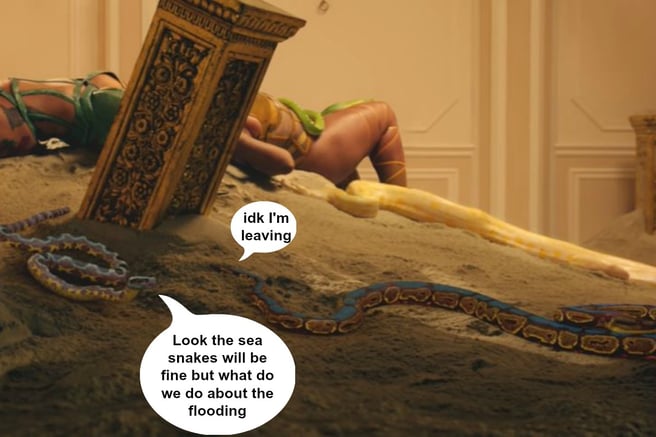 It's every snake for himself

Suddenly we're in Willy Wonka which is strangely... unsurprising.

Several women are twerking and simulating sex on the floor while Cardi sings to us, but here we realise how YouTube forcing the clip to use the 'clean' version of the lyrics is the greatest injustice of the 20th century. ﻿﻿

'Look at my mouth, look at my thighs,' Cardi B sings, before adding, 'this water is wet, come take a dive'.

We're sure Cardi would agree that 'this water is wet' is not her greatest lyrical moment, but that's because the original lyrics say: 'this pussy is wet, come take a dive' which is an ARTISTIC TRIUMPH.

Luckily the very important lyrics 'I don't cook, I don't clean,' remain and is this song a new anthem or wot.

Listen to the latest episode of Mamamia Out Loud where we discuss the WAP film clip. Post continues below.

There's a lot of repetition of 'wet n gooshy' and by this stage the background melody 'there's some whores in this house,' is embedded deeply into our brains and we're nodding along enthusiastically.

BUT SHUT THE F*CK UP because yes Kylie Jenner has just arrived for no reason.

Does she dance? God no. Does she sing? Definitely not.

Even the leopard is like, 'hey lady y u here,' but Kylie doesn't care because she got paid an absurd amount of money to stare at the camera and strut down a hallway and yeah, she thinks she did a pretty good job if she's honest.

She then opens a door and looks back at the camera, and next minute we're in a leopard-themed room with Cardi B who is doing the splits and, quite literally, has her tits out. 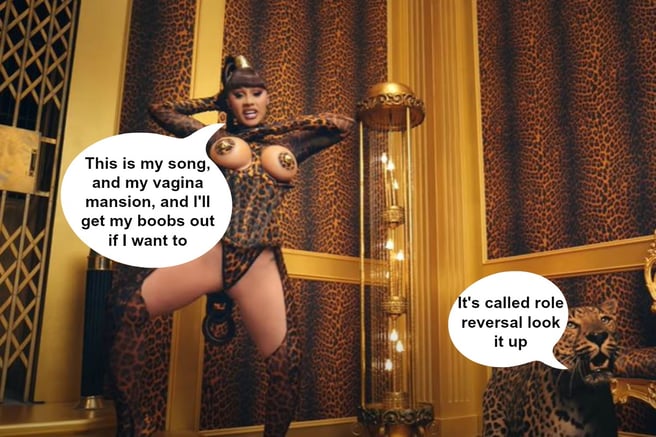 We think we might have read somewhere that Cardi B was attacked by a leopard during filming (unconfirmed) and like... no shit, the leopard 100 per cent thought she was a fellow leopard?? 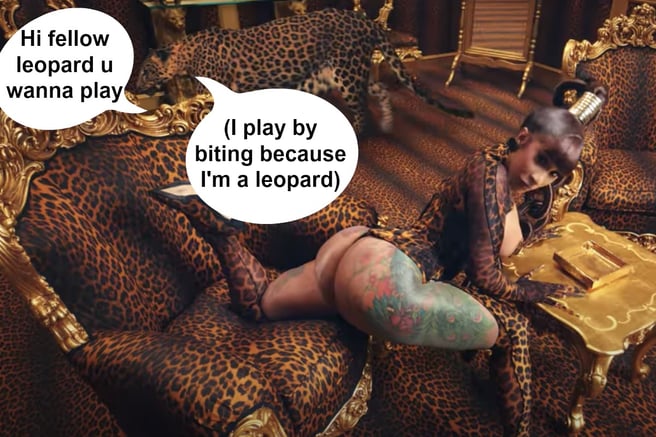 Who would ever have expected a wild animal to bite.

Over in the room next door, Megan Thee Stallion is back doing the splits with two white tigers in case you were wondering.

One of the white tigers licks his lips and sir this is no place for the objectification of women we are very busy watching these rappers own their sexuality in a way that centres female pleasure so you and your male gaze best leave this mansion via the front door and pls watch the gushing waterfall on your way out.

Megan has her bum in the air and is referring to a "bottom-feeder" which is some human centipede level shit but at this point we're genuinely quite into it. Because we're whores. In this house.

Now there's a dozen or so women dancing in a shallow pool which we can only assume is full of vagina juice. Even their hair is wet, are we conveying adequately enough just how wet it is inside this leaking house? 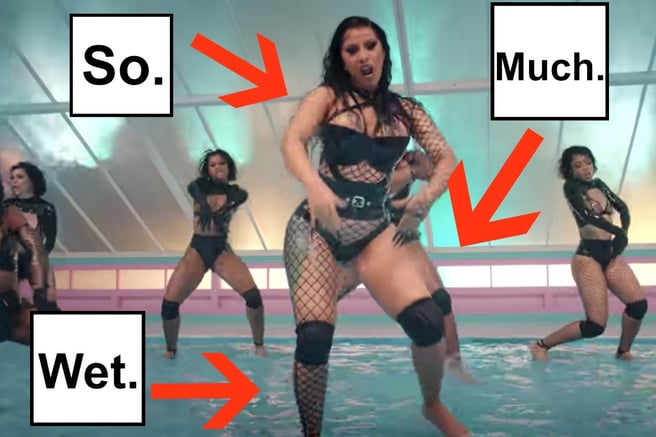 We just hope there are towels on hand.

BUT IT'S NORMANI and you better believe she was smart enough to bring an umbrella. She's arrived in the mansion and keeps trying to inform a maintenance person that water is literally bursting out of the front door AND there's a white tiger roaming around without a lead but no one's listening.

Towards the end of the clip everyone forgets about the issues at hand and just dances to "there's some whores in this house" which is honestly the perfect metaphor for 2020.

Point is, this is us right now. 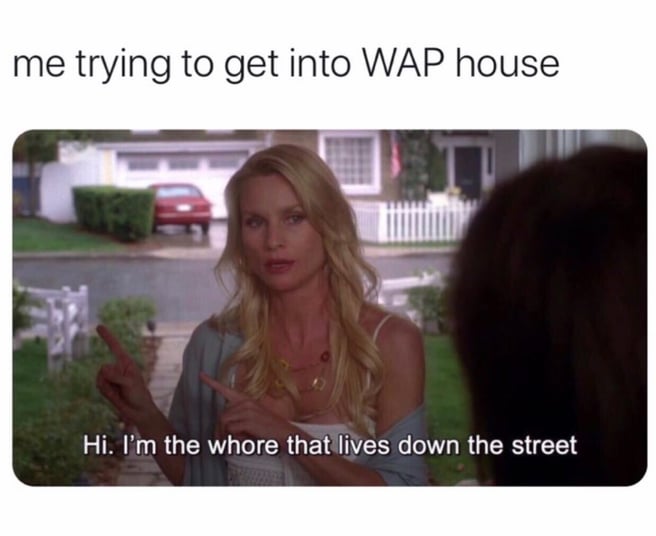 It might not be Covid-safe to be wading in a pool full of, and we quote, "wet n gooshy"-ness right now, but damn.

ashley kerlin a year ago

Reply
Upvote
2 upvotes
Okay I'm just going to say it.
To this lesbian it felt like being in nirvana watching this.
And I did NOT for a moment equate the snakes with penises. Even though there are plenty of women who do have penises.
It felt to me like women celebrating each other's company, and basically saying men are optional, we can have a damn fine time with, or entirely without, them.
Because there's a revolution under way, as Mia has found diving into lesbian TikTok.
There's a huge surge of women who are celebrating their bi or lesbian sexuality. Whether it's always been, or they are overturning a lifetime of suppressing what they always knew, or experimenting and liking what they find. And they aren't embarrassed to admit it.

Reply
Upvote
1 upvotes
The YouTube version is so censored it kind of makes no sense. I listened to the explicit version on Spotify, and... oh my. Look, I'm not their target audience, I'm not a rap fan, this isn't really my thing. But I am enjoying some of the reactions! Such outrage, all these people so offended who are only giving them more publicity. I'll admit, that's the only reason I listened to it, to see what all the fuss was about. The Streisand Effect in action.
News
General
Opinion
True Crime
Politics
Sport
Explainer
Entertainment
Celebrity
Reality TV
Movies
TV
Books
Rogue
Royal
Lifestyle
Beauty
Fashion
Weddings
Home
Wellness
Health
Fitness
Travel
Food
Parents
Before The Bump
Pregnancy
Baby
Kids
Teens
School
Parent Opinion
Work & Money
Money
Finance
Career
Lady Startup
Relationships
Sex
Dating
Separation
Friendship
Family
Real Life
Couples