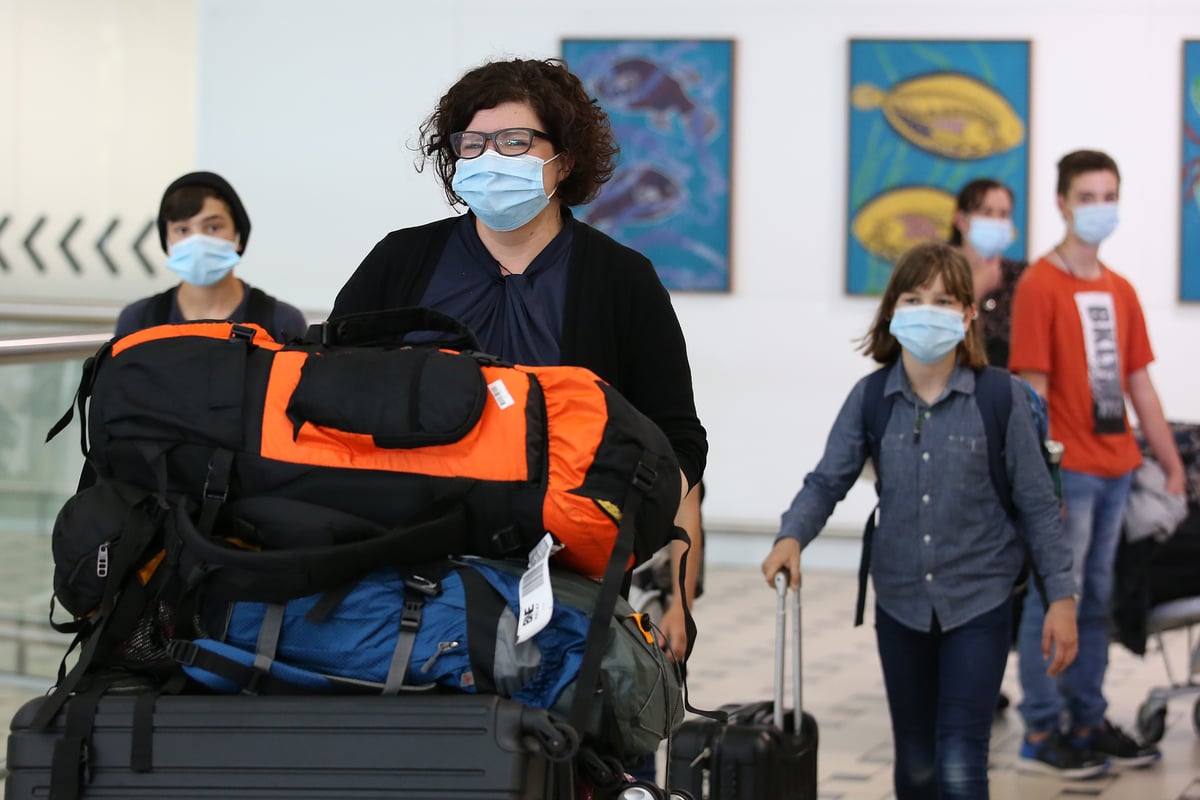 Many travellers have had their Easter plans thrown into disarray following a snap three-day lockdown in Brisbane, just days out from Easter.

On Monday, Greater Brisbane entered what is hoped will be a 'circuit-breaker' three-day lockdown, which is expected to end at 5pm on Thursday. However, it hasn't been confirmed whether restrictions will be extended into the Easter weekend.

NSW Chief Health Officer Dr Kerry Chant said the new case was a man in his 20s who attended the Byron Beach Hotel with three of his friends and sat near the Queensland travellers who were infectious at the time. His friends have returned negative results.

Watch our love letter to masks. Post continues after video.

Until the end of Easter, residents of the Byron, Ballina, Tweed and Lismore shires are limited to 30 visitors in a home.

All venues will resort to the four square-metre rule and customers must remain seated.

"We also ask for people in those four local government areas to wear a mask and we will make this mandatory in retail, if you are going shopping, in hospitality venues if you're a worker, on public transport, although we know most people will be going around in driving, so that includes taxis and Ubers," Berejiklian said.

Queensland Premier Annastacia Palaszczuk said an update would be provided tomorrow at 9am local time, and if it's "encouraging news tomorrow, we will be lifting the hotspot for Greater Brisbane".

Here's what you need to know about border restrictions ahead of Easter.

So, can I still go to Queensland over Easter?

The Queensland border is currently open so you do not need a border pass to enter from any Australian state or territory. However, states and territories have introduced different border restrictions and in some cases, border closures, for people travelling from Queensland.

Those in NSW are still able to travel to Queensland, with Premier Gladys Berejiklian announcing that the state will not shut its borders to Queensland over Easter.

However, she has urged people to "reconsider" their travel plans.

"If you were going to Queensland for a holiday unfortunately we will ask you to reconsider, especially you shouldn't go to Greater Brisbane," she told reporters on Monday. "Holiday in NSW."

In Victoria, the state has declared the entire Greater Brisbane area a "red zone", meaning returning Victorian residents need to apply for a red-zone permit and self-quarantine for 14 days if approved.

Meanwhile, Western Australia has imposed a hard border closure with Queensland, while South Australia has closed its borders to Greater Brisbane.

This means only travellers with valid exemptions can travel from Queensland to Western Australia, and only returning South Australian residents, essential workers, and people relocating to the state are allowed to cross the border. They are also required to isolate for 14 days.

Tasmania has declared the five local government areas of Brisbane, Logan, Moreton Bay, Ipswich and the Redlands as high risk. Anyone travelling from these areas will not be allowed to enter the state without quarantining for up to two weeks.

The ACT has declared Greater Brisbane a hotspot, meaning anyone who has been in the Brisbane or Moreton Bay council areas since March 11 needs to get tested and self isolate immediately until they receive a negative result.

The Northern Territory has also declared six local government areas in Queensland hotspots. Travellers from those areas will need to enter two weeks of supervised quarantine.

What about travelling to other states over Easter?

In Victoria, all arrivals must fill out a permit form, regardless of which state you are travelled from. There are also different requirements if you are arriving from Queensland.

All travellers entering South Australia also needs to fill out a Cross Border Travel Registration, while those travelling to Western Australia must complete a G2G Pass and have a health screening at Perth Airport.

The Northern Territory also require people to fill out a border entry form, with different restrictions for Brisbane residents.

Borders are also open in the ACT and New South Wales, where no permit is required. However, again there are different restrictions currently in place for Queensland travellers. Premier Gladys Berejiklian also announced new restrictions for Byron Bay and surrounding areas on Wednesday.

And lastly, if you want to travel to Tasmania, you will need to provide your travel details before entering and be aware of travel alerts that are in place for Queensland, New South Wales and New Zealand.

C
cassiecanas a year ago

Reply
Upvote
So if you fly into Sydney from Brisbane you have to self isolate and get tested, however if you drive into nsw you are good to go? I live in northern nsw and so many people travel back and forth to Brisbane every day.
News
General
Opinion
True Crime
Politics
Sport
Explainer
Entertainment
Celebrity
Reality TV
Movies
TV
Books
Rogue
Royal
Lifestyle
Beauty
Fashion
Weddings
Home
Wellness
Health
Fitness
Travel
Food
Parents
Before The Bump
Pregnancy
Baby
Kids
Teens
School
Parent Opinion
Work & Money
Money
Finance
Career
Lady Startup
Relationships
Sex
Dating
Separation
Friendship
Family
Real Life
Couples