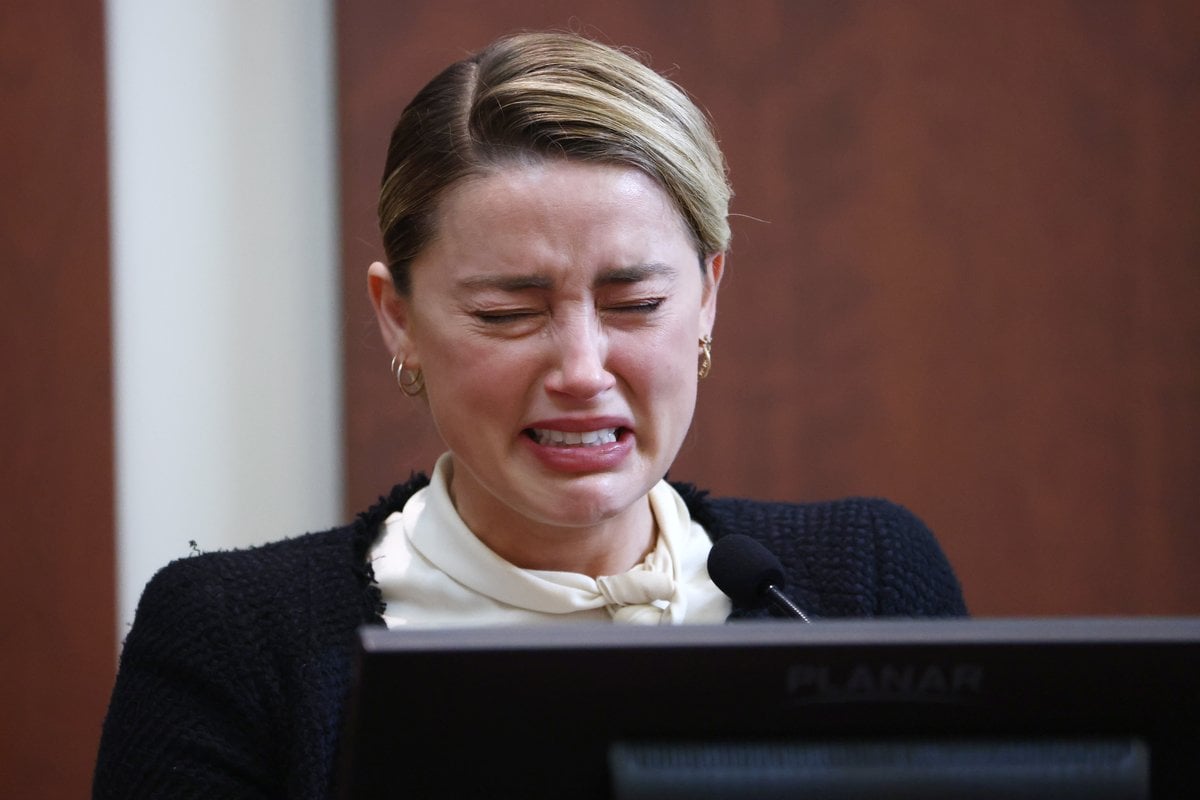 Content warning: This article deals with allegations of domestic violence and sexual assault, and could be triggering for some readers.

Unlike the federal election debate, we don't need a public poll to tell us who is coming out on top in the Johnny Depp/Amber Heard defamation case currently playing out in court.

Indeed, if you doubt the power of celebrity, then you can put those doubts to rest. Overwhelmingly, the stance held by many, many people is "Amber Heard is lying" followed immediately by "Johnny Depp is a victim". It's the main consensus over every social media platform - from Instagram, to Facebook, to TikTok, to Twitter - and tabloid news sites are happy to clickbait their headlines and bait misinformation.

Watching the discourse over Depp and Heard's trial - which is still ongoing, by the way - is frustrating. For those of us who are on the quest for truth, rather than a camp to belong to or a hill on which to die on, it doesn't matter how much we like Depp's work or, conversely, how much we dislike it.

This is about more than celebrity and reputation and "being cancelled".

This is about allegations of domestic violence and sexual assault. Those issues warrant a deeper focus than just, "I love Johnny, therefore I hate Amber, therefore she is lying."

Let me be clear. Until this trial is actually over, and Heard is allowed to give her full testimony, the way Depp has been allowed his, there should be no clear "winner". That is what a court of law is all about, isn't it?

With so much fiction to separate from fact, it's easy to get caught up in moulding the truth to fit your purpose. So, here's a breakdown - and explanation - of the myths about both Depp and Heard that we're seeing everywhere.

1. Heard is sniffing cocaine while on the stand.

While testifying on the stand, Heard can be seen sniffing and wiping her nose in a tissue. Since she was high at Coachella in 2016 and has spoken about her parents' substance abuse, this means she is sniffing coke.

Explanation: Heard is sniffing because she is reliving traumatic events. It is called "blowing your nose". Come on, people. Aren't we better than this?

2. Heard stole lines from the film The Talented Mr. Ripley.

Soon after Heard started testifying, social media users on Facebook and Twitter ran quotes from the movie The Talented Mr. Ripley side by side with quotes from Heard. According to the posts, the quotes were verbatim.

It was this passage in particular (delivered in the movie by Gwyneth Paltrow's character) that was supposedly ripped off by Heard while referring to Depp: "The thing with Dickie... it’s like the sun shines on you, and it’s glorious. And then he forgets you and it’s very, very cold... When you have his attention, you feel like you’re the only person in the world, that’s why everybody loves him so much."

Explanation: There is nothing in the seven hours of testimony by Heard that is from Mr. Ripley or any other movie. This has been fact-checked by several sources, including AP News. Someone just made something up and it caught fire.

On the stand, Heard recounted falling in love, being slapped in the face, pushed against a wall, beaten, bruised, threatened, and sexually assaulted with a bottle. At times, she cried. At times, her face was contorted in pain. At times, she smiled. At times, she looked exhausted. People were quick to say it was all an act. 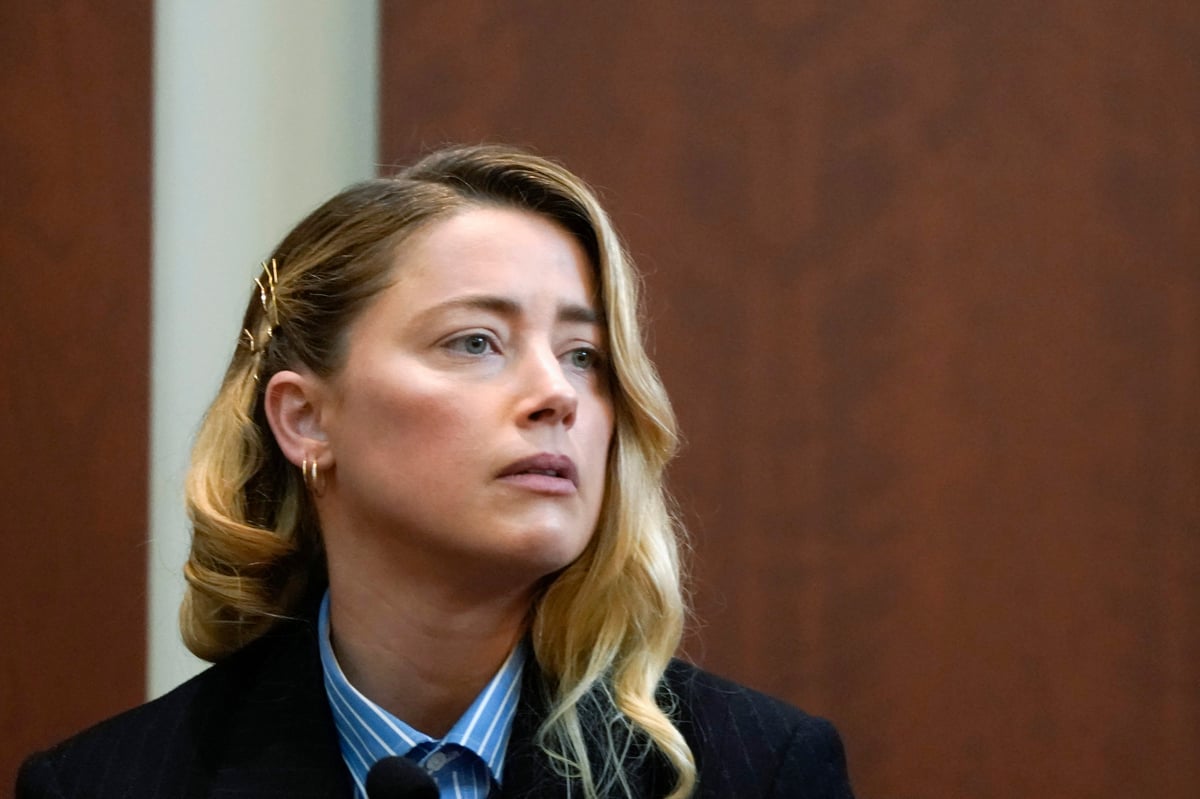 Explanation: Besides pointing out the obvious - that Depp is an actor too, and no one has accused him of acting even though he also got teary and emotional on the stand - there is also the fact that victims of abuse don't all conform to certain behaviours or looks. If you don't like how Heard looked or acted on the stand, then that's a prejudice you hold and you need to take a closer look at that.

4. Depp has never shown any violence before.

On the stand, Depp was quiet and softly spoken, a little like his Willie Wonka character in The Chocolate Factory. Most people know him as a great character actor - a little eccentric at times (who can forget when he blasted Hunter S Thompson's ashes from a cannon for a cool three million dollars) - but nevertheless a private individual who doesn't cause a fuss.

For many, it's hard to think Depp could ever hurt Heard because he has never shown any sort of violence before.

Explanation: In actuality, Depp has shown instances of violence in the past. In 1989, he was arrested for assaulting a security guard after the guard tried to get people to leave Depp's hotel room due to noise complaints. In 1994, he was arrested after getting into an altercation with then-girlfriend Kate Moss at a hotel room and wrecking the room. In 1999, he was arrested after swinging a plank of wood at photographers after they tried to take a picture of him. In 2018, he punched a crew member while shooting City of Lies. He is currently being sued for this.

In addition, there have been incidents with his ex-partners. His first wife Lori Anne Allison was paid over a million dollars to stay quiet after he left her a vile message. Actor Jennifer Grey, who dated Depp in 1989, recently wrote in her memoir that Depp would be "crazy jealous and paranoid about what I'd been up to while he was gone".

Actor Winona Ryder, who dated Depp from 1989 to 1993, said in an interview that her first boyfriend - which has been widely reported to be Depp - used to "smash everything". Even though she released a glowing statement for Depp, she subsequently hired a lawyer to ensure the statement could not be used in the UK libel case. Another ex, actor Ellen Barkin, testified in the libel case that he threw a wine bottle at her.

Ex-wife Vanessa Paradis has previously spoken about Depp's temper and throwing plates at the wall and that he is calm when he manages to control his inner demons.

In late 2020, Depp sued UK paper The Sun for calling him a "wife-beater". The trial was heard over 16 days in July at the Royal Courts of Justice in London. Ultimately, the judge ruled that 12 out of the 14 claims of domestic violence had occurred.

Fans of Depp are prone to saying that the UK case was prejudiced against Depp and that the outcome of that case does not matter.

Explanation: Just like the trial currently taking place in Virginia in the States, the UK trial pored over reams of evidence and testimony. The two trials appear to tread the same ground - the major difference is that the US trial is beamed to the world, which was a request by Depp.

6. Heard has a history of abusing her partners.

Heard has been accused of abusing all her exes, but the only incident you'll be able to find is when she was arrested over an altercation with her ex Tasya van Ree.

Explanation: van Ree explained two "homophobic and misogynistic individuals" found out Heard was with van Ree, and reported Heard for grabbing van Ree's arm. Heard was arrested and quickly released, and van Ree has been outspoken in her support for Heard. The two are still friends, and van Ree is a witness for Heard's trial.

7. Heard's recording of Depp proves she was planning to accuse him of abuse.

There are video recordings, photographs of bruises and phone recordings by Heard. Fans of Depp have taken this to mean she had a plan all along and that she "pushed and goaded Depp into violence".

Explanation: People experiencing domestic violence would obviously want to record the abuse for proof - it's one of the first things anyone in Heard's situation would have done, especially if it's up against someone as famous and powerful as Johnny Depp. And, as clearly shown, Depp's icon status has many already in his corner - so Heard is damned with the proof and certainly damned without.

Reply
Upvote
3: you are right AH: bad acting, can’t act and IS acting
4. DEPP has NO history of domestic abuse. fact
5. The UK case “ absolutely swayed by a judge who had connections to Amber’s team“ FACT
6. The witness to Amber abusing her ex was more than grabbing her arm. Fact
7. Indeed, She admits planning the whole thing.
“It would be wise to get your facts straight before you preach to other people”
K
kde 6 days ago

Reply
Upvote
The revolting texts he wrote about wanting to harm her in such a brutal manner are evidence enough that he is violent and has mental health issues. Then there’s the videos of his violent erratic behaviour. Oh and that fake story about her supposedly cutting off the top of his finger…. Depp texted both an Australian doctor and told medical staff that he in fact caused the injury. He was also clearly off his face at the time. But yet people draw a blind eye to this stuff and say she’s the one who is a liar.
News
General
Opinion
True Crime
Politics
Sport
Explainer
Entertainment
Celebrity
Reality TV
Movies
TV
Books
Rogue
Royal
Lifestyle
Beauty
Fashion
Weddings
Home
Wellness
Health
Fitness
Travel
Food
Parents
Before The Bump
Pregnancy
Baby
Kids
Teens
School
Parent Opinion
Work & Money
Money
Finance
Career
Lady Startup
Relationships
Sex
Dating
Separation
Friendship
Family
Real Life
Couples