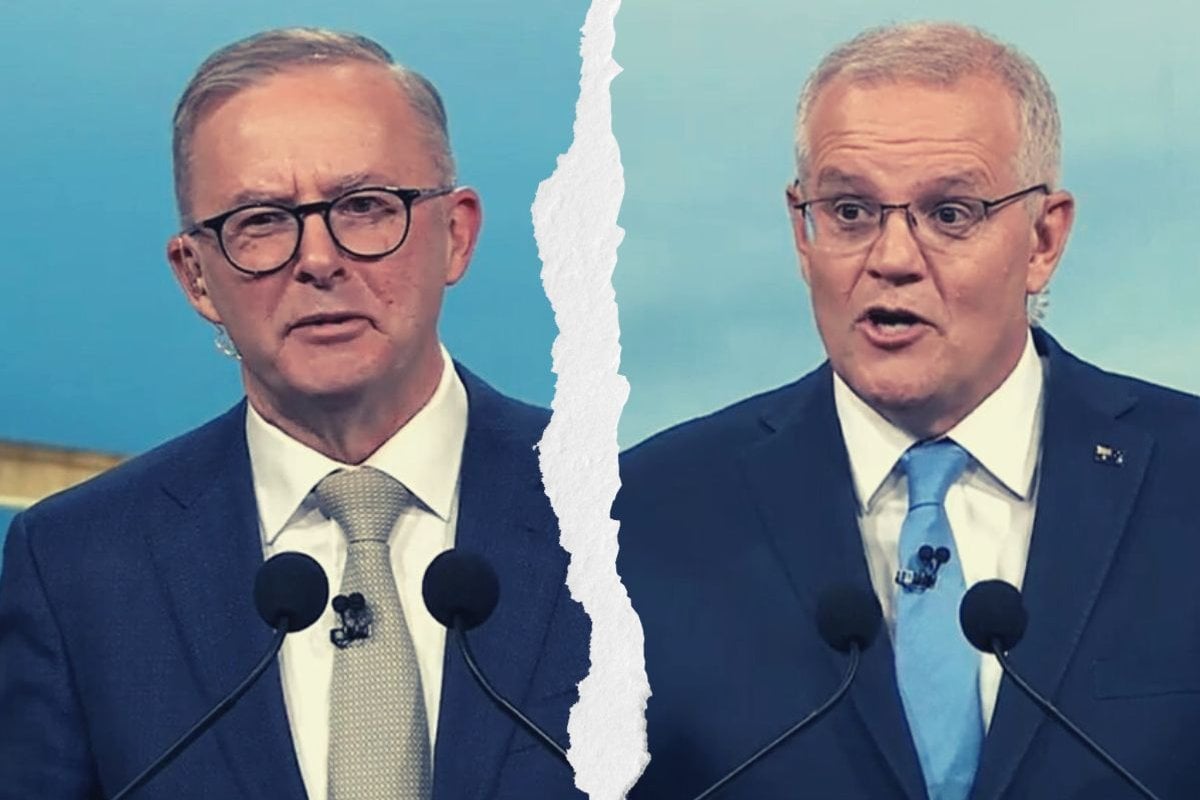 I tuned in late, when our two potential leaders were already well and truly warmed up.

And by warmed up I mean yelling, brashly, over-the-top of each other all while ignoring their moderator, journalist Sarah Abo, as she tried to reign them in.

Prime Minister Scott Morrison and Opposition Leader Anthony Albanese were being quizzed about how the Australian public view their personal character, when I flicked over to the second leaders' debate on Channel 9 on Sunday night.

"Prime Minister, the hard truth of it is, a lot of people don't like you... shouldn't a leader unite, not divide?" one of the panellists, Deborah Knight, asked Scott Morrison as he listened in with his trademark smirk.

A few seconds into the answer, Albanese interrupted him. Then he did it again.

The two men started talking over each other, each of their points lost in the mish-mash of voices.

WATCH: I tuned into the leaders' descending into this chaos.

I was so focused on the awkward exchange, I missed the fact they'd been arguing about net-zero, and who was doing more for the planet in regards to driving down emissions. Morrison had been trying to make the point that he'd united his party on that issue - encouraging them and leading them towards committing to net-zero by 2050.

It was an interesting route the PM chose, answering a question about his personal character with a climate change anecdote. But it was the perfect question to tune in on because for me, it summed up why this election campaign feels so... disappointing.

Climate change has been nominated in our recent Mamamia Votes survey as one of the top five most important election issues for 68.7 per cent of respondents.

Albanese and Morrison were arguing about a few percentage points - whether the Coalition was going to reduce emissions by up to 35 per cent by 2030 or was it more likely to be around 28 per cent.

But their argument was pointless. They were squabbling over a percentage gap that isn't anywhere close to what we actually should be aiming for (which, by the way, is up around 75 per cent). But neither of the promises made by both Labor and the Coalition on this issue represents an emissions pathway in line with the Paris Agreement’s 1.5 degree warming limit.

For me, it summed up the mood. Our politicians are off in the corner fighting about the semantics of their particular pledges and policies, while the rest of us scratch our heads on the sidelines thinking, huh?! Neither of your policies go far enough though??

The Prime Minister was then asked about corruption.

"Have you seen any corruption on your side of politics in your time, and if so, what did you do about it?"

"No" was his answer.

Just a flat-out no.

And this is where my confusion continued. David Crowe, chief political correspondent for The Sydney Morning Herald and The Age, was quick to provide an example: "what about that time when there was money from property developers in NSW that was routed down to the free enterprise foundation and then back through federal offices, back to NSW?"

But ScoMo's point was that he wasn't aware of that happening so his hands are clean. Again - semantics. Semantics the voting Australian public doesn't really care about it. It was his party - therefore it's his problem.

Albanese at least admitted that corruption had been found within his party, and that was a "good thing". But then he refused to listen to the moderator, ranting at Morrison for another 30 seconds or so, clearly realising he'd had a bit of a win on that question.

And here I am, in my lounge room, watching a grown man increase his volume to a shouty level, while repeatedly being asked to: "Stop it Mr Albanese."

It was the next blow-up that had me reaching for the remote. They were arguing about whether or not Labor has drafted legislation for a National Anti-Corruption Commission given Albanese appeared so "passionate about it". Morrison accused Labor of only having about 'two pages' to show for their so-called plan, while Albanese argued back that under Morrison, there was no room for debates in parliament on opposition legislation, and besides, "oppositions don't draft legislation, governments do."

But all of this was yelled. Loudly. Over one another, with a whole heap of finger-pointing and scoffing.

It had me pondering, if this was two women, they'd be called 'bitchy' or 'shrill.' Words we never use for men.

But it was at this point - watching another tantrum disguised as an argument that I thought to myself, 'Y'know what? Nope. I would like my Sunday night back please', and I turned the TV off.

641,000 Australians tuned in last night to watch the debate. I am sure many did what I did - watched a bit, and turned it off. Bravo if you made it through the full hour and 44 minutes.

Oh my god. I watched five minutes. It was awful. #leadersdebate #theworst

The result of the debate has been confirmed a dead heat. Albanese won the last one, by the smallest of margins.

These debates are supposed to help Australians decide who to vote for. But I'd be surprised if last night helped anyone.

Albanese and Morrison aren't neck-and-neck because they're both inspiring, incredible debaters who wowed viewers last night.

They're neck-and-neck, by most accounts and analysis today, because they were equally uninspiring.

Reply
Upvote
My proposed new format: each candidate gets 100 points. They lose a point for every interruption. Two points off for waffling, going off topic, or avoiding the question. First one to zero gets dropped through a trap door.
M
mamamia-user-482898552 14 days ago

Reply
Upvote
Sometimes I wonder whether anyone has ever seen Question Time in parliament. You wouldn't be so surprised if you had.
L
laura__palmer 14 days ago