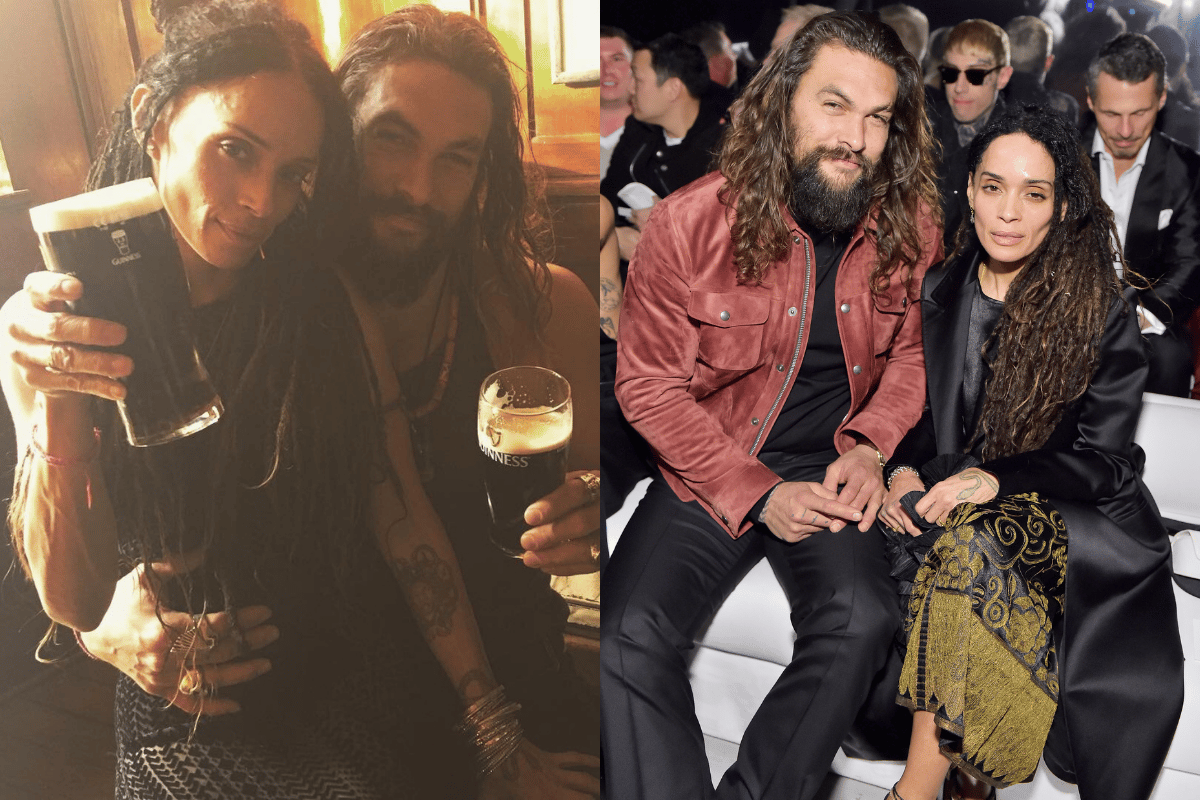 When Jason Momoa met Lisa Bonet, his future wife and mother-to-be of his two children, it was a moment he had dreamt of since he was eight years old.

The couple were first introduced by mutual friends at a Los Angeles jazz club, and in the words of Bonet, they were "together" from that day on.

Almost two decades later, two children, and almost five years of marriage between them, the pair unintentionally became a power couple in Hollywood.

And then in January of 2022, the couple made a joint announcement on Instagram, sharing that they were "parting ways" - but the post wouldn't remain up for long.

"We have all felt the squeeze and changes of these transformational times. A revolution is unfolding - and our family is of no exception... feeling and growing from the seismic shifts occurring," Bonet and Momoa wrote in the now deleted post.

"And so, we share our family news, that we are parting ways in marriage. We share this not because we think it’s newsworthy. But so that as we go about our lives, we may do so with dignity and honesty. The love between us carries on, evolving in ways it wishes to be known and lived," the post continued.

"We free each other - to be who we are learning to become. Our devotion unwavering to this sacred life and our children. Teaching our children what’s possible - living the prayer. May love prevail."

Just a month on from the devastating announcement, the post has been removed and new reports claim the pair are "working" on their marriage.

At the time of the initial announcement, a source reportedly close to Bonet shared the reasoning behind the split, saying the decision wasn't made "overnight".

"They have grown apart because of different focuses," the source reportedly told People.

"A few years ago, Jason was struggling to find work. Now his career is booming. And he wants to keep working as much as he can."

Meanwhile, the actress "had no interest in joining" Momoa "on every location," they claimed. "She enjoys her life in LA... it's been difficult for them to be apart.

"For some people, it might strengthen their marriage. For Lisa and Jason's marriage, being apart has been a disaster."

It was reported that Momoa and Benet had every intention to "keep peace" for the sake of their family.

"It's not going to be some scandalous divorce where they trash talk each other," the source went on to tell the publication. "They are both very spiritual and believe in a higher power."

That was until this week, when a new report came out claiming the pair were working to mend their marital issues.

"Jason moved back in with Lisa about two weeks ago and they are very much back together," an insider claimed, as reported by Hollywood Life.

"They decided to work on things rather than throw in the towel because they have so much invested in each other."

Amid the news, let's take a look back at their family life and relationship.

But years later, Momoa admitted that he'd actually been obsessed with Bonet since her first stint on The Cosby Show all the way back in 1984. 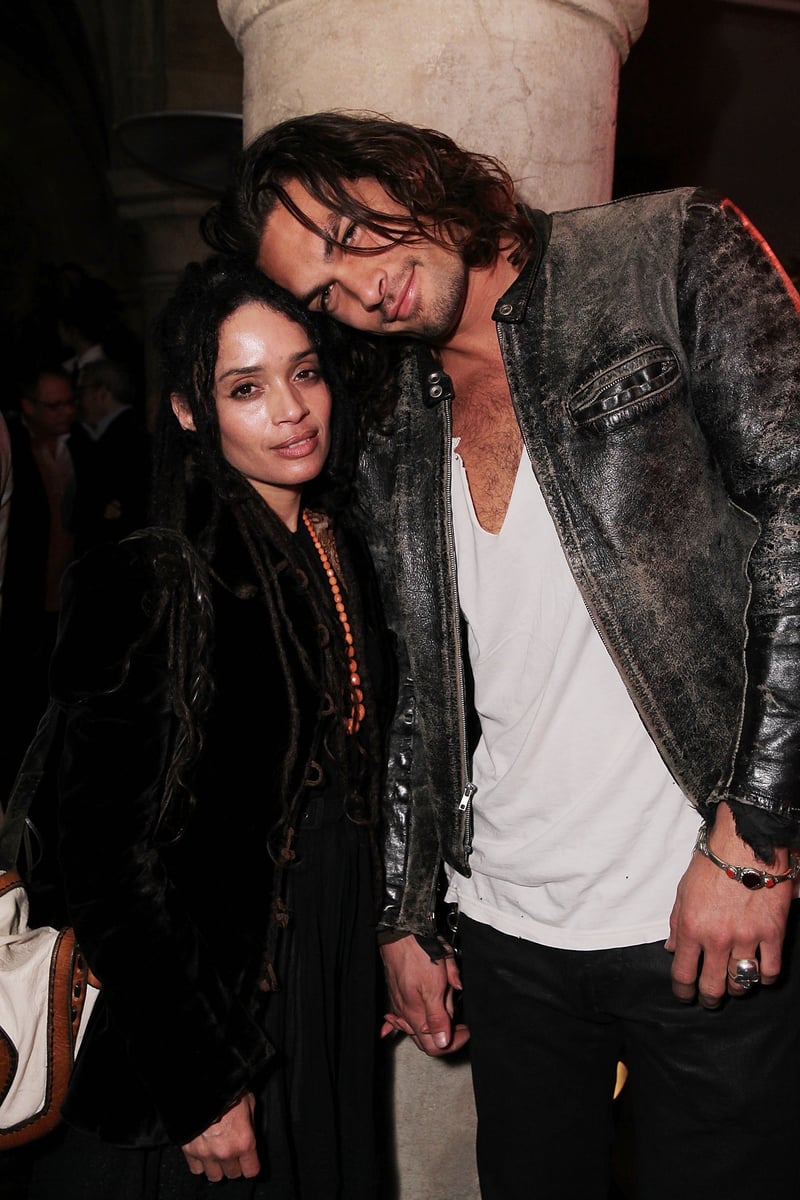 Lisa Bonet and Jason Momoa, 2010. Image: Getty. "Ever since I was eight years old, and I saw her on TV, I was like, 'Mummy, I want that one!'" Momoa shared on The Late Late Show.

"I’m like, 'I’m going to stalk you for the rest of my life and I’m going to get you.' I am a full-fledged stalker. I didn’t tell her that until we had two babies - otherwise, I’d be creepy and weird. I’ve always wanted to meet her. She was a queen, always."

Later reflecting on the moment they met, Momoa admitted he'd had "fireworks going off inside" of him.

"I had huge dreadlocks, she had dreadlocks. I literally turned around, I was with my best friend, and I see her and I’m just like..." he shared, 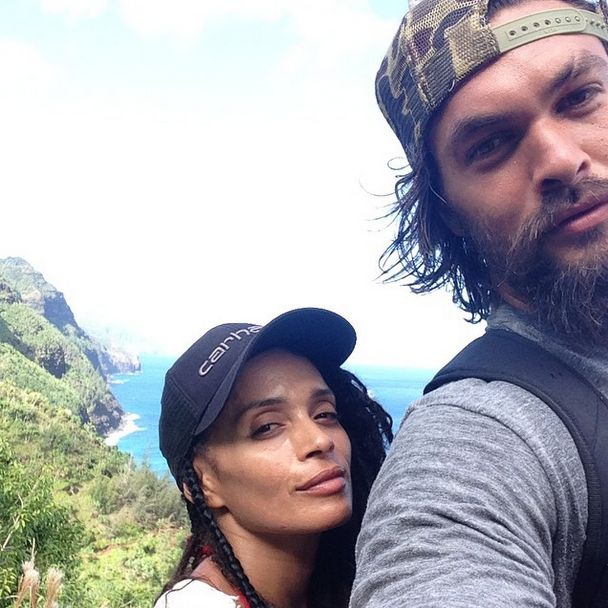 Jason Momoa and Lisa Bonet. Image: Instagram @prideofgypsies. "That was it," he added. "We had Guinness and grits [at a cafe] and, you know, the rest is history."

For Bonet, it had been a love that "came big".

"I can’t say it was full-on from the moment we saw each other, but we have been together from the day that we met," she told Porter Magazine back in 2018.

"In that moment, love came, and it came big, and he did not run as I think a lot of men do. He basically picked me up and threw me over his shoulder, caveman style!"

She went on to say, "Jason embodies a rare form of masculinity in this day and age - he's a leader; he's generous. Just in terms of charisma, physique, the right use of power, responsibility, work ethic, you can go down the line."

Momoa and Bonet welcomed their first child together in July 2007, naming her Lola. The A Different World actress was already a mother to then 18-year-old Zoë, whom she shares with musician Lenny Kravitz.

Their second child together arrived in 2008, and they named him Nakoa-Wolf Manakauapo Namakaeha. His middle name is connected to his Hawaiian heritage. 'Nakoa' (meaning warrior) was inspired from him being born on the "stormiest, rainy night," Bonet explained in 2009 via her website.

"The name was always going to be Nakoa-Wolf," she wrote. "But Jason did the research on first [and] middle name."

"'Namakaeha' is Momoa's Hawaiian given name, which translates to 'all knowing eyes'."

For Momoa, becoming a father changed his perspective on life, and pushed him to become "more focused".

"I really can't tell you what the hell I was doing before I had kids," he explained in 2017.

"Just f**king off. Wasting time. I think I was pretty reckless and definitely a bit out of control. Now I'm more focused.

"I probably love myself more and take care of myself more because I want to stick around." 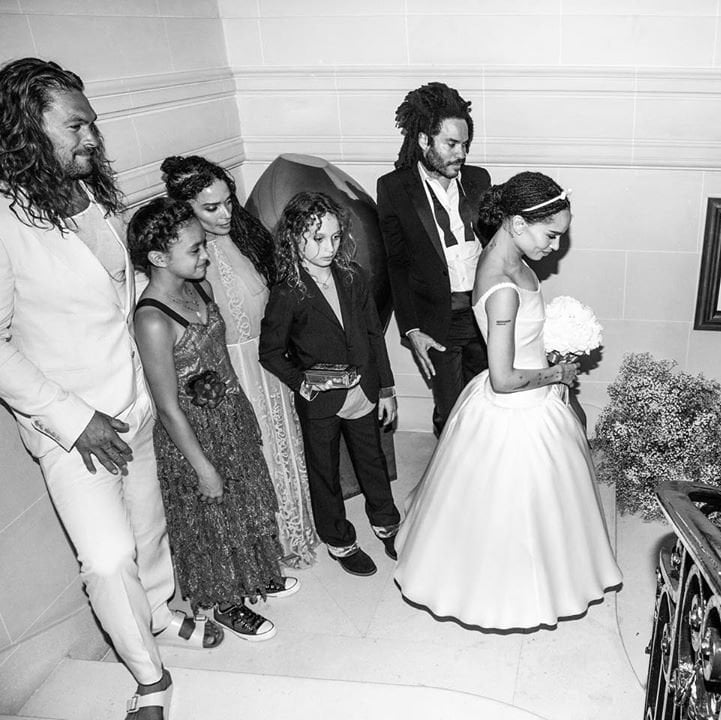 While Kravitz and Bonet were married for less than six years before separating in 1993, the pair managed to keep a close relationship. In fact, Momoa even became well-loved by his wife's ex husband.

"People can’t believe how tight Jason and I are, or how tight I still am with Zoë’s mom, how we all relate," Kravitz told Men’s Health in November 2020.

"We just do it because that’s what you do. You let love rule, right?

"I mean, obviously, after a breakup, it’s work - it takes some work and time, healing and reflection, etc. But as far as Jason and I? Literally the moment we met, we were like, 'Oh, yeah. I love this dude.'"

In fact, the pair are so close that the Aquaman actor even presented his partner's ex-husband with matching rings to celebrate their bond.

Even amidst the news of separation, Momoa has maintained a close relationship with his step-daughter.

In a sweet exchange on Instagram, the Aquaman star shared a post promoting Zoë's highly anticipated blockbuster film The Batman, in which she stars alongside Robert Pattinson as Catwoman.

In the caption he wrote: “so proud. can’t wait. march 4th love u zozo.”

“i love youuuuuuuuuu @prideofgypsies,” the 33-year-old actor and musician responded.

In November 2017, Momoa and Bonet made their love official with a wedding union. An official source leaked the news to Us Weekly that they had gotten married at their home in Topanga, California.

"I thought it would have stayed [on the down low], but some arsehole leaked it, and I will find you," the Game of Thrones actor told Entertainment Tonight in 2017.

He went on to say that they had been married for what felt like over a decade.

"You know what, I've been married to my wife for 12 years," he continued. "It's just a gathering of our families and celebrating our love."

While many relationships come with their fair share of ups and downs, Bonet had known Momoa was the love of her life a decade before they had gotten married.

In 2008, she'd shared that it was Momoa who had pushed her to get back into acting after she starred in the American adaption of Life On Mars.

"To have my face reinstated in minds and homes once a week was an intense decision. I'm a shy person. I don't know if it's in my DNA to share with the world," she told PEOPLE. "Having a mate has given me that feeling of safety."

She continued, "Jason is the love of my life. He's everything I hoped would come."

The couple also starred on screen together in 2014 in the film Road To Paloma.

Momoa wrote, directed and starred in the movie alongside Bonet.

"It's an honour. In this business, we have to travel so far away from our families. We have two children, so if we can work together, that's awesome," he told Collider. "Before I met her, it was a dream to work with her. "