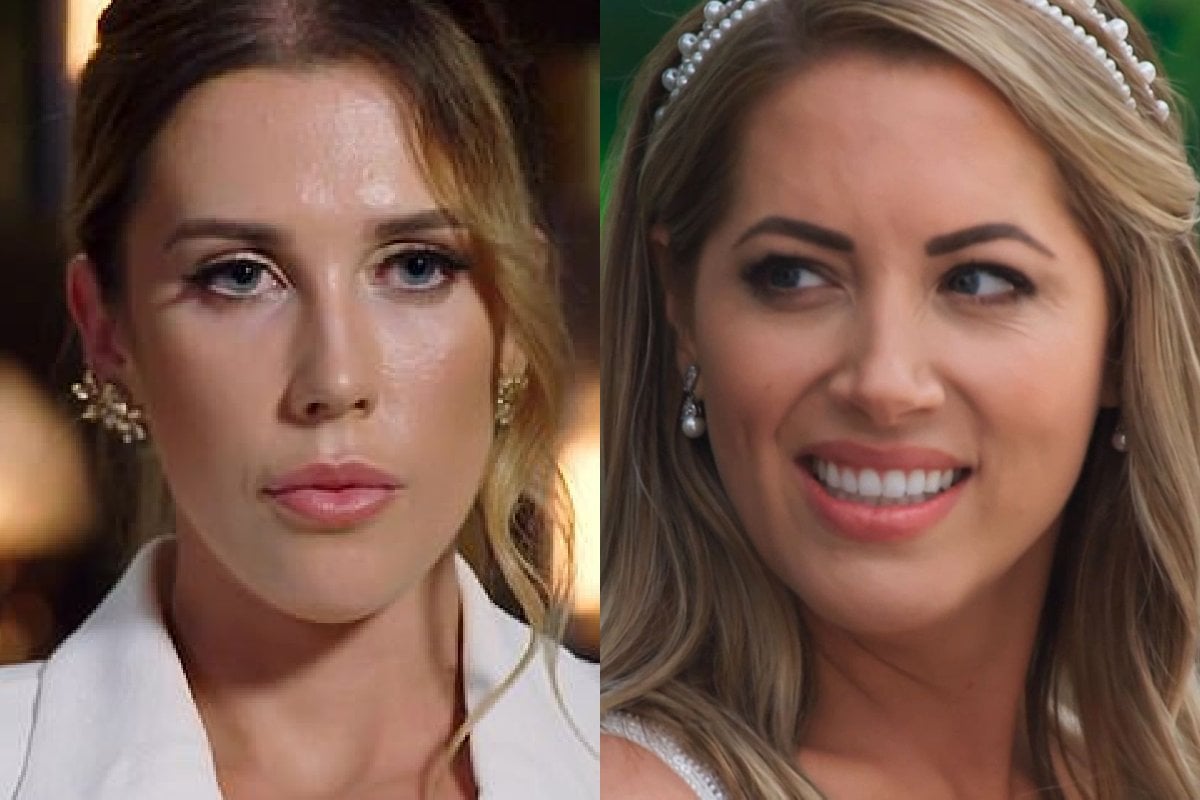 During Tuesday night's episode of Married at First Sight we were faced with an uncomfortable truth.

It's not just the men.

Over the last few weeks we've talked about the behaviour of the men on this season of MAFS.

We discussed how they became intimate with their wives on their honeymoons before telling them they're not "their type". How they were so concerned about hair colour, and boob size, and eye colour, that they couldn't really see the women standing in front of them.

We saw them rank their wives as the "fourth most attractive" among the rest of the wives.

We watched them slowly pick away at their wives' self-esteem, one small criticism of their body and their personality at a time.

We witnessed a grown man tell a woman she'd be perfect for him if she just had the right eye colour. We watched another man lament how "hard" it is for him because he needs a woman with big boobs and not all women have big boobs.

They seemed to have expectations of what their perfect partner would look like and act like that no mortal woman would ever be able to live up to.

While we've been both disappointed and amused by what we've seen on our screens, we haven't been surprised.

We've seen it before. Both on TV and in our own lives.

And last night we were finally forced to face it.

It's the women too.

Over the last few weeks we've watched Beck pick away at her husband Jake. Jake didn't seem to live up to Beck's standards from the start and she wasn't shy about telling him about it.

It got to the point where John Aiken had to intervene.

"I've listened to this. I've heard it, and I'm exhausted. There are two people on the couch in front of me. Only one of them, right now, is warm and empathic. Rebecca, that's not you," he said during one of the Commitment Ceremonies.

"Rebecca, your standards are so unrelenting that no man, not Jake, not anybody, is going to measure up to that. Now, you may smile at that, but I can tell you that's not going to work in a relationship."

Then last night we were introduced to Jaimie and Chris. Chris is a gentle giant who was raised by strong women and who is shy about his dyslexia and limited education.

While Chris was unsure about talking in public and whether he was smart enough for his future wife, he was sure about one thing - he was a good guy who would respect his wife.

His wife Jaimie couldn't hear that though, she was too busy staring at his nose ring, and asking questions about his tattoos. And raising concerns he didn't finish high school, while she went to university.

It was interesting to watch it from the other side - to witness a woman picking at a man who didn't live up to her preconceived notions of what her partner should be.

To watch a woman be so concerned about what's on the surface that she wasn't able to look beneath to see the good man standing in front of her.

MAFS is a reality TV show, it's a situation where people are thrust together under intense pressure, there's always going to be conflict. And people are always going to have "types" or things they find themselves more drawn to in a romantic partner.

But it feels like some of this season's contestants are particularly picky. That they're - as John Aiken pointed out - lacking the empathy and warmth to be able to see their partner as a human being, who is also making themselves vulnerable and putting their heart and reputation on the line for the sake of this experiment.

Instead, they're viewing them through the lens of a checklist of what they require in the perfect partner, and quickly resorting to pettiness if they don't immediately tick everything off the list.

It feels like some of these contestants have standards so high no mere mortal is ever going to be able to live up to them.

It also feels sad. While they're so focussed on ticking off their checklist, on making sure their partner has the right eye colour, the right boob size, and the right education, they're missing the good bits. The messy bits that make people uniquely loveable.

Let's hope they realise this before it's too late.

Sam, Bryce, Cam and the hypocrisy of the men on this season of MAFS.

This season of MAFS has been particularly cruel and last night it reached a new low.

We need to talk about the men on this season of Married At First Sight.

S
sunbird a year ago

Reply
Upvote
3 upvotes
Shows like Mafs and bachelor and it’s off shoots are terrible cheap tv created by Aussie networks to fulfill their quota of showing Aussie made shows. The initial seasons are okay and then they just go down hill where they encourage nasty behaviour - which in turns normalises sexism, racism and demeaning behaviour from both men and women. This teaches the teenagers that this is okay behaviour when it simply isn’t. It’s not okay to have these shows on when we have women being raped in our parliament, murdered on the way home, young school girls being sexually harassed and the bullying going on in schools. If we show this behaviour on tv then how can we be surprised that it seeps into the fabric of our society. Mamamia - by constantly doing articles and recaps you’re contributing to this. I have slowly stopped reading your website as I feel it contributes to the toxic society we live in. Every now and again I come back and then I see this dribble alongside articles about how our PM is being utterly useless about what is going on inside his “house”. Stop giving these people airtime! Be the change you want to see in our society and get rid of these junky tv articles and shows completely.
<
<deleted> a year ago