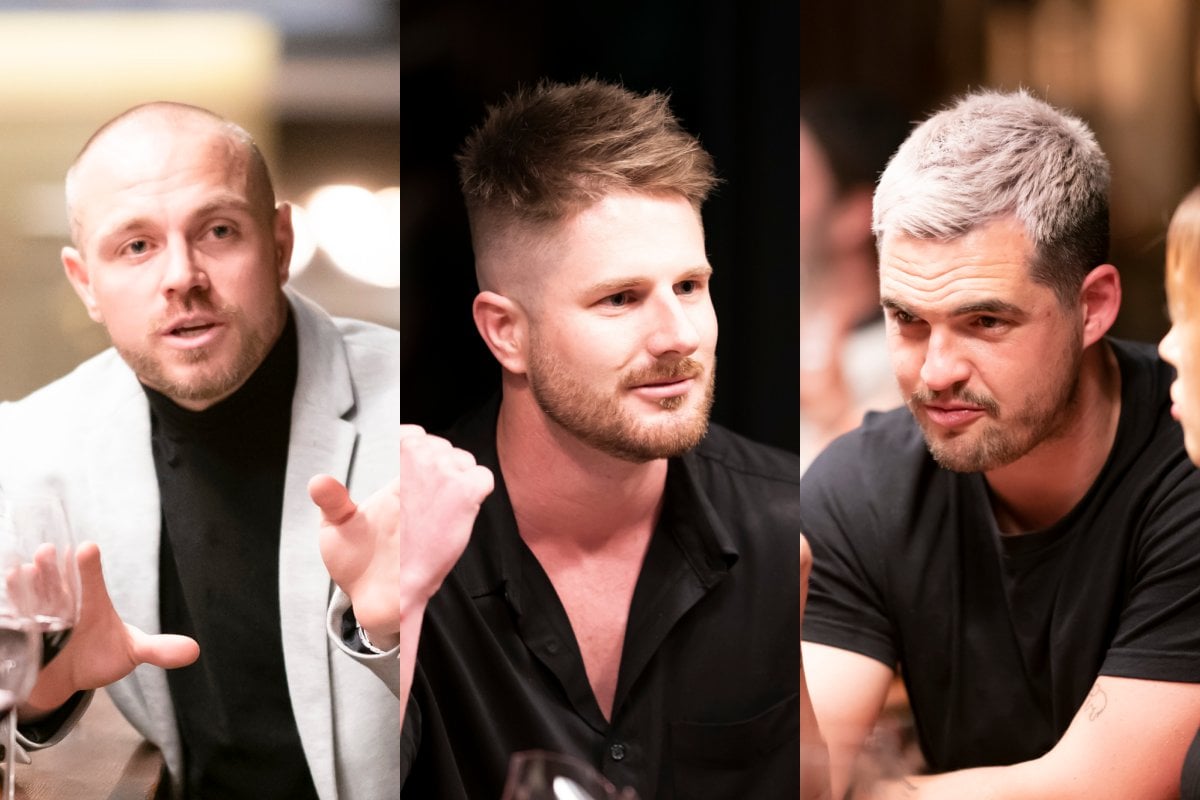 During Wednesday night's MAFS dinner party, we met three different types of men - The Good Guy, The Smug Guy and The Silent Guy.

All three of the men claimed to respect women, while their actions said otherwise.

Bryce (The Good Guy) came to the dinner party determined to confront Sam (The Smug Guy) about how he spoke about Coco at the last commitment ceremony.

It's unclear why Bryce was so determined to defend Coco when Coco clearly didn't want him to.

The fight continued to escalate throughout the dinner party and came to a head when Bryce threw a glass of water in Sam's face.

Throughout this entire scene, Bryce's wife Melissa sat and stood by his side, clearly upset about the fight and the fact she was brought into it.

The second storyline of the evening involved Cam (The Silent Guy), his current wife Samantha, and Coco.

Cam and Coco had met up several times over the last couple of weeks and had both agreed privately that they would have been a good match.

At the dinner party, as people started to talk about it, Coco decided to be upfront with Samantha and told her it was a conversation people were having.

While Samantha told Coco she had her blessing, she was clearly upset that this was the first time she was hearing about it. That it was Coco who'd told her, not Cam.

When asked about it, Cam sat there silently and would only weigh in to say that he was still a married man and wouldn't do anything to disrespect his wife.

As his wife cried and placed her wedding ring on the table. And as Coco sat beside her, mortified.

This episode hit a nerve with so many women because we've all met The Good Guy, The Smug Guy and The Silent Guy before. And we've all experienced their hypocrisy before.

Maybe we've dated The Good Guy. Perhaps The Silent Guy dated one of our best friends. Maybe The Smug Guy is currently married to our older sister.

The Good Guy appears to be the perfect man on the surface. He's confident, he's ambitious, he's always the life of the party.

The Good Guy knows it's not OK to deride his partner's looks and personality in public. He does that in private. He does it more subtly.

The Good Guy was brought up to respect women, to see them as equals, as long as they have the right eye colour.

The Good Guy likes to let everyone know he's a Good Guy. He isn't afraid to call out someone else's behaviour - in fact, he enjoys it. He's a feminist, you see.

Perhaps you've seen this guy out in the wild. You might have heard his voice in the crowd, maybe you came across him making a public scene. You might have noticed the timid, teary woman by his side. She's embarrassed, maybe even upset. He hasn't noticed though, he's too busy being a Good Guy.

Unlike The Good Guy, The Smug Guy doesn't make any excuses for his behaviour. He doesn't pretend to be anyone he isn't. He's hiding in plain sight.

As far as The Smug Guy is concerned, things are black and white. Either a woman fits into his mould of a perfect partner or she doesn't.

He said what he said, and he's standing by it.

The Smug Guy won't back down when The Good Guy comes for him, he'll fight back. He's not afraid to go low either, and he will make comments about someone's appearance, and will aim to hit below the belt.

The Smug Guy doesn't care what anyone thinks of him, or how his actions impact them, and that's what makes him so dangerous.

Nothing riles The Smug Guy up more than getting a dose of his own medicine.

You've definitely come across a Silent Guy or two. The Silent Guy is a quieter version of The Good Guy.

He truly believes he has respect for women and avoids confrontation at all costs. In fact, he's so determined not to upset anyone, he will just sit there quietly and not say anything at all.

LISTEN: The MAFS moment that proves the show is a lie. Post continues below.

Even when the two women in his life are embarrassed and really just need him to speak up, to set the record straight, The Silent Guy remains quiet.

It's easier that way. It's easier to make the women feel like they're going mad, while you quietly slip out the backdoor, untarnished.

What The Silent Guy sees as respect actually appears cold, detached. He makes you feel like you're not even worth the effort of him speaking.

In some ways, The Silent Guy is the worst one of all. In reality, they're three sides of the same coin. And they'd probably all be horrified to hear that.

Of course, MAFS is a reality TV show, and we know shows like this are heavily edited. But last night's episode held a mirror up to the kind of toxic masculinity women are faced with every day.

We've all met The Good Guy, The Smug Guy and The Silent Guy before and we could see ourselves in the wives as they reacted to the husbands' behaviour.

Let's just hope the good guys, the smug guys, and the silent guys were looking in that mirror too.

This season of MAFS has been particularly cruel and last night it reached a new low.

We need to talk about the men on this season of Married At First Sight.

S
seachanger20 a year ago

Reply
Upvote
This is an excellent summary of male dysfunctional behaviour towards women. Thankyou for highlighting how deceptive some behaviours can be.
M
msd a year ago