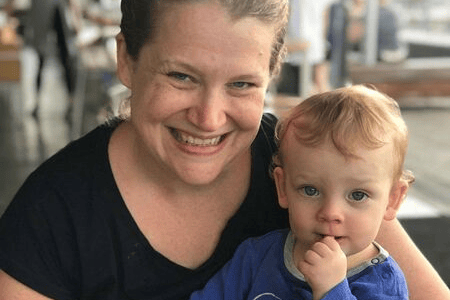 After returning from a dream holiday in the US three years ago, Genevieve was unsure about what life had in store next.

“I was 35 years old, single and I had a great job, but I came home feeling a bit lost,” she says.

“It was during that time of reflection that I had an epiphany: I wanted to become a mother.”

Genevieve decided to book in to see her GP to discuss her options. At that stage she says she thought about freezing her eggs, but was otherwise not sure where to start.

“Having never had a pregnancy scare my whole life, I had no idea if I was even fertile. Thankfully my GP was very helpful and began by organising a number of general health checks, as well as a test to see how fertile I was for my age.

For such a huge and highly personal decision, Genevieve’s GP suggested she talk it over with her immediate family.

“I have a very close relationship with my mum, dad, brother and sister and they were all really supportive. I was touched that my dad’s main concern was how hard I might find motherhood without a partner by my side.

“I worried about this too and thought about whether or not I would be damaging my future child if they didn’t have a dad.

“The more I explored this concern with friends in all sorts of different relationships, the more I realised that having a dad around is no guarantee of happiness.”

Genevieve was referred to a fertility specialist and after running through the different options, they both agreed that IVF using donor sperm was the best course of action.

“It was very daunting at first – deciding to try and become a mum all by myself.

“I felt overwhelmed, but I knew that I wanted a child and that I had the support of my family. I decided there was no point delaying it any longer.”

The first step for Genevieve was choosing a sperm donor from an online database of around 50 donors.

“I wanted to find someone with a similar background to me and my main criteria was that he had good health and was well educated.

“On the one hand, it was a really hard decision as I didn’t want to settle for anyone. On the other hand, I know I'm not perfect, so why would I expect that of my donor? I made sure I was 100% happy with my choice before moving on.”

“I knew from friends and couples who had gone through IVF that it would be challenging; I worried how I would cope doing it alone.

“I chose a clinic in the CBD so at least I could walk or grab an Uber and I tried to schedule my appointments either at the start, or the end of the day so that I didn’t have to tell work.”

Genevieve’s first egg collection went well and while they only retrieved five eggs, she was hopeful one of them would lead to a baby.

“The daily phone calls were tough and I had to emotionally prepare myself for disappointment. On day five, just before I was due into the clinic for the transfer with the only surviving embryo, the clinic called me with bad news.

“I was crushed but also surprised at how lovely and genuine the doctor was. We decided to keep going straight into round two.”

Genevieve’s treatment was tweaked a little and the IVF cycle began again.

In this episode of Get Me Pregnant, hosts Rachel Corbett and Leigh Campbell talk through the steps involved in having a baby alone. Post continues below.

“At the second egg collection they retrieved six eggs and one developed into a viable embryo for implantation. I then had to wait 10 very long days before going back into the clinic for a pregnancy test.

“I had been having some bleeding at home so I was resigned to receiving more bad news. I was utterly thrilled and shell-shocked to instead be told that I was pregnant!

“My sister was on hand to share in the joy that afternoon – it was wonderful to have her there with me for that moment.”

The pregnancy had some complications as Genevieve was diagnosed with gestational diabetes but despite that, she enjoyed being pregnant.

“I felt mostly fine but I was worried about negative reactions when I told people I was doing it alone.

“My boss thought it was great and most people I told were very open and supportive. Being a solo mum is hardly unheard of in 2020.”

Genevieve was induced at 37 weeks and she had a beautiful baby, Patrick, by emergency caesarean section.

“The birth was probably the biggest challenge I faced, especially because Patrick was whisked away to special care for four days as soon as he was born.

“My mum was with me for most of it and Patrick was okay, but seeing all the couples next to their babies while I stood alone was incredibly hard.”

After leaving the hospital, Genevieve spent four weeks living with her mum and dad. Her parents still worked at the time but were around to help with practical chores like washing and cooking.

“I knew as soon as I had Patrick I must not be afraid to ask for help. I leaned on family and friends and I have since created a strong community who are helping me to raise him.

“He has a wonderful bond with my parents and siblings, my best friend is his Godmother and he loves his daycare community.”

Genevieve admits that some of the hardest times as a solo mum were in the first few months at 3am when she was completely exhausted.

“There was no one else to rely on and it was emotionally and physically tiring in those early sleep-deprived days," she says.

"Returning to work was also a challenge as I've felt torn between my two different worlds... like I'm not giving 100 per cent to either.

“I don’t let myself feel guilty about it, though. I have to work full time as the only breadwinner and while it is tiring not to be able to share the responsibility, I do reach out to my family and friends when I need to.”

Genevieve knows that her path to motherhood is not for everyone, but she feels strongly that for those women who want to try, there's no time like the present.

“Find yourself a good GP and do your research into options and fertility clinics near you. There will never be a ‘perfect time’ to become a mother and it’s a difficult decision to do it alone.

“I feel incredibly lucky to continue to experience the joy of having a child by myself with the support of my ‘village’ behind me; Patrick is such a happy, loved little boy.”