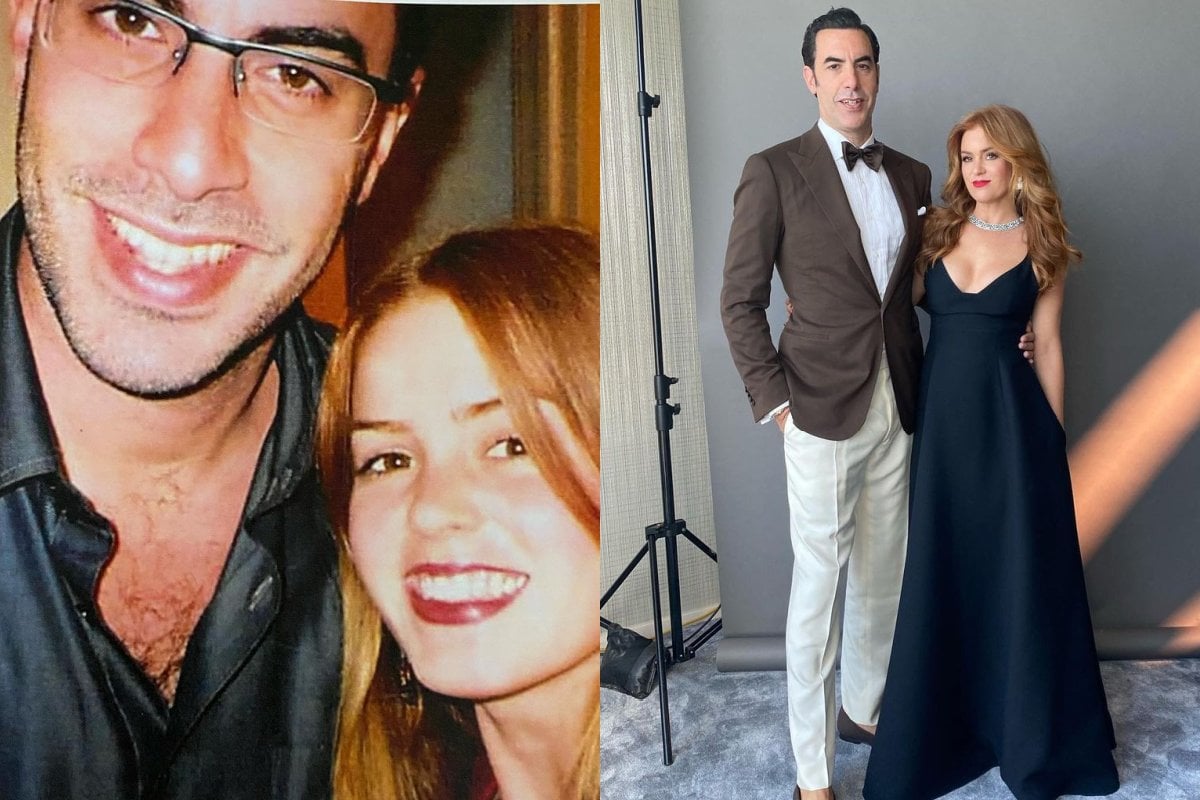 Isla Fisher and Sacha Baron Cohen have starred in some of the most iconic comedy films of our time (Borat and Wedding Crashers, anyone?). But outside of the spotlight, the married pair keep their relationship and family life very quiet.

In December last year, the couple made a permanent move to Sydney from LA, and according to the Daily Mail, the couple enrolled their children at a local school.

Since then, both Fisher and Baron Cohen have been seen in Sydney's eastern suburbs looking very low-key.

This week, the actress spoke about the couple's decision to move back to Australia from the United States.

"I feel like I can be myself in Australia," Fisher told Marie Claire.

"I love the people. I love the colours and the sights and the taste and the smells. And there’s something about being home which is just... it feels very magical.

"I miss it so much when I’m away and I have a very Australian sensibility. Whenever I meet another Aussie, I always think, 'Oh my gosh, we’re twins!'"

When speaking to Stellar magazine in March, Fisher said: "I just feel so safe, I suppose the word is cosy, when I'm in Australia. It's where I grew up.

"I'm the happiest when I'm home. I miss it when I'm not here. I don't feel any pressure when I'm in Australia. I don't have to say or do or be anything. I mean, I don't even have to wear shoes."

In 2018, Fisher told Marie Claire that it "isn't easy" raising children in LA as she shared her dreams of moving back to Australia.

"I have this secret fantasy of slowing down, moving to Byron Bay, getting off the grid and sitting on the sand with a Vegemite sandwich," she shared. 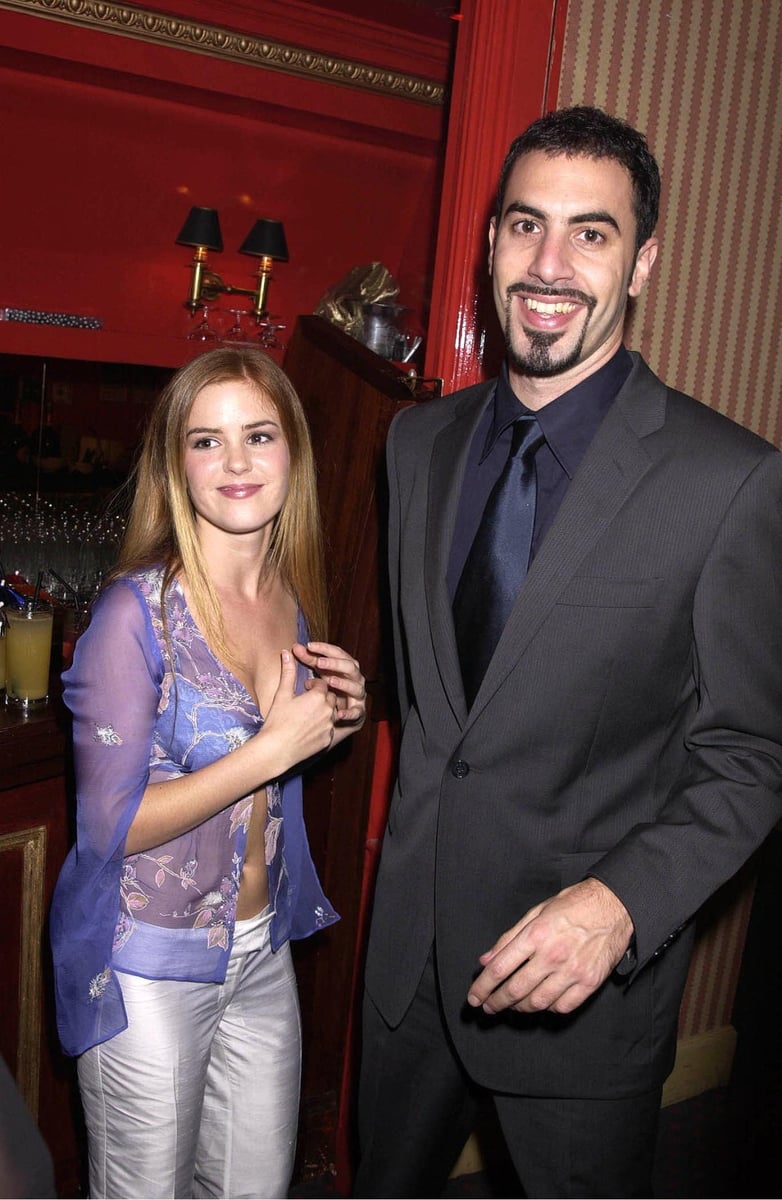 However, the couple waited four years before they got married. During that period, Fisher converted to Judaism.

"I will definitely have a Jewish wedding just to be with Sacha," Fisher told The Evening Standard in 2004. "I would do anything — move into any religion — to be united in marriage with him. We have a future together, and religion comes second to love as far as we are concerned."

"I love the focus on family, food, and laughter," Fisher told C Magazine when asked about why she loves the religion.

"You know, I didn’t get to go to university because I’ve been acting since I was a kid. So, for me, studying theology was also fascinating. I love Judaism."

On March 15, 2010, the couple married in Paris. Just six people attended the wedding. 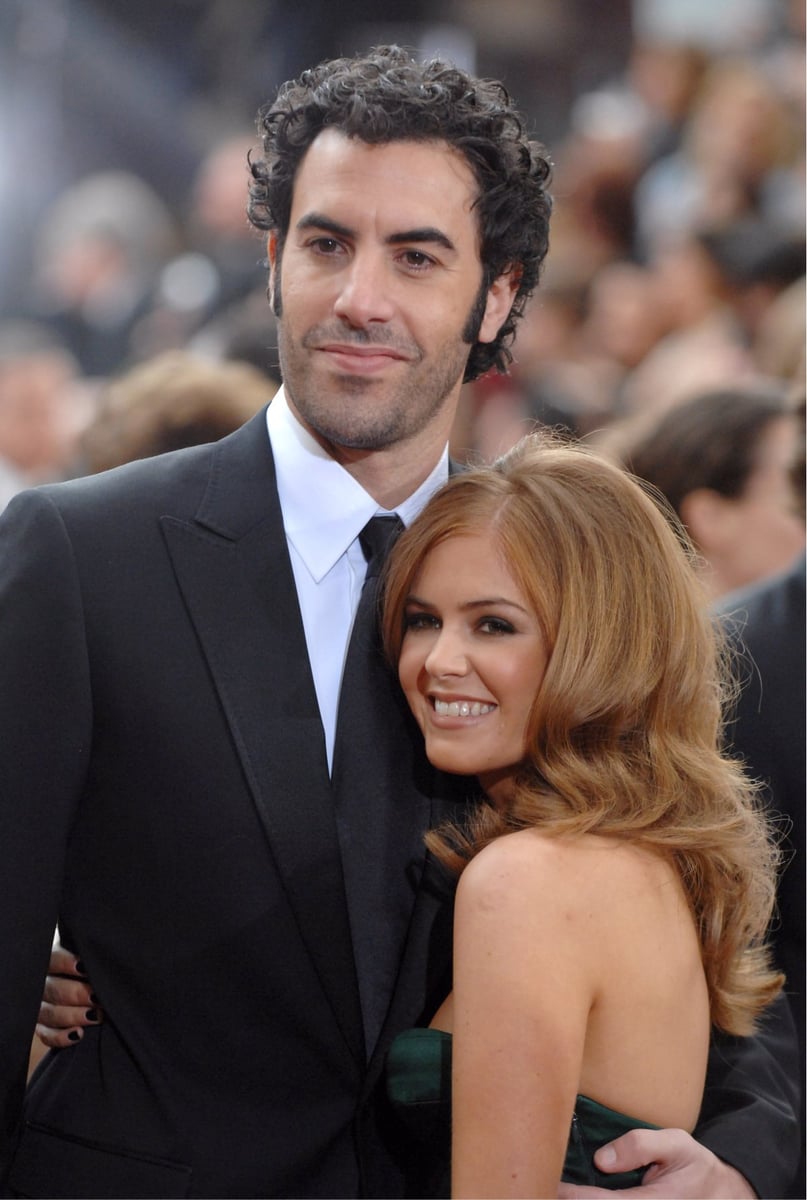 When explaining why the couple decided on an intimate ceremony, Fisher told Allure that they wanted something with close family and friends, out of the public eye.

"It [was] very important to me to have a beautiful ritual celebrated with my family and friends. And when you are in the public eye, to keep that private and to make it happen without it being really visible is really difficult," she explained.

During their relationship, both Fisher and Baron Cohen's acting careers have skyrocketed. Baron Cohen has written, produced and starred in countless comedies, such as Borat, Bruno and The Dictator. While Fisher has appeared in blockbuster films including The Great Gatsby, Now You See Me and Confessions of a Shopaholic.

Funnily enough, it was Baron Cohen who pushed Fisher to get into comedy. And that's the reason she auditioned for her breakthrough role in Wedding Crashers. 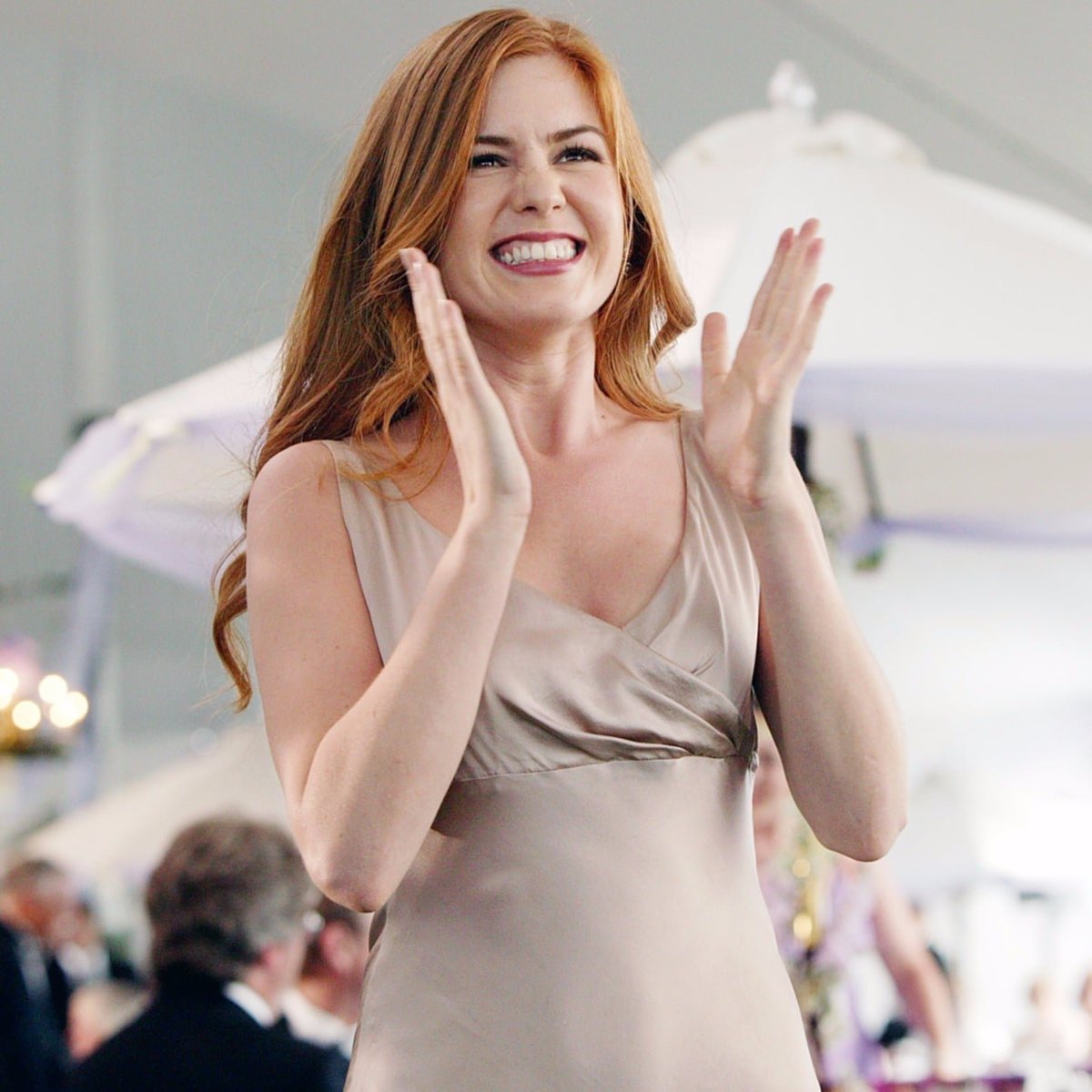 "Sacha was the reason I got into comedy. I was actually auditioning for a lot of dramatic roles and having no success at all," she told Indie London.

"I was losing confidence in my abilities when he recommended that I do comedy. He felt I was really funny, so when someone as funny as him recommends that, I listened and actually auditioned for Wedding Crashers, which ended up being my big break."

After years of appearing in various big films, the couple has lessened their workload. Fisher mainly takes on supporting roles once a year and Cohen plays the lead in a movie every three years. Most recently, Cohen reprised his role as Borat in the sequel, Borat Subsequent Moviefilm.

Happy Valentines Day to my husband. Sorry I had to crop you out of this snap but honestly this is such a great photo of me.

Fisher and Baron Cohen have three children: two daughters and one son.

The couple has never shared that they were expecting any of their children, so publications only became aware when Fisher was seen with a baby bump. 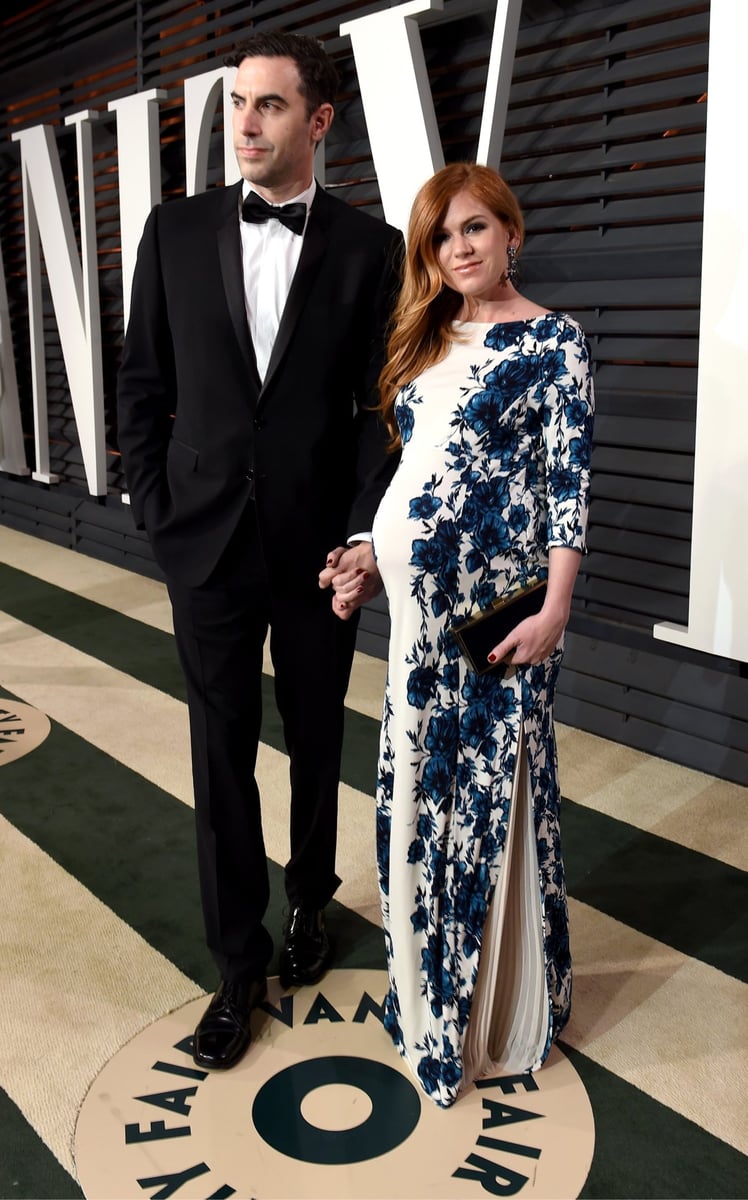 Before moving to Sydney, the family split their time between Los Angeles and London.

"Juggling a family in LA isn’t easy," Fisher told Marie Claire. "There’s not really a culture of bringing your kids to dinner parties or to restaurants past 6pm. I tend to entertain at home because I want to be with my family – it’s easier to put your kids to bed and have a wine with friends."

Despite both parents appearing in big films and being quite recognisable, they try to keep family life as normal as possible.

"I try not to bring it home. [The kids are] only exposed to the fun parts like picking a pretty dress and having hair and make-up done," she explained.

However, with a comedian dad known for his costumes, they can't always hide it.

"You live with the handlebar moustaches, the mohawks, everything, the costumes," Fisher explained during her 2016 appearance on the British talk show Lorraine.

"It's hard to drop the accent if you're doing it all day on set. Obviously, the kids would get very confused when they were tiny and The Dictator would be holding Elula. It was very amusing." 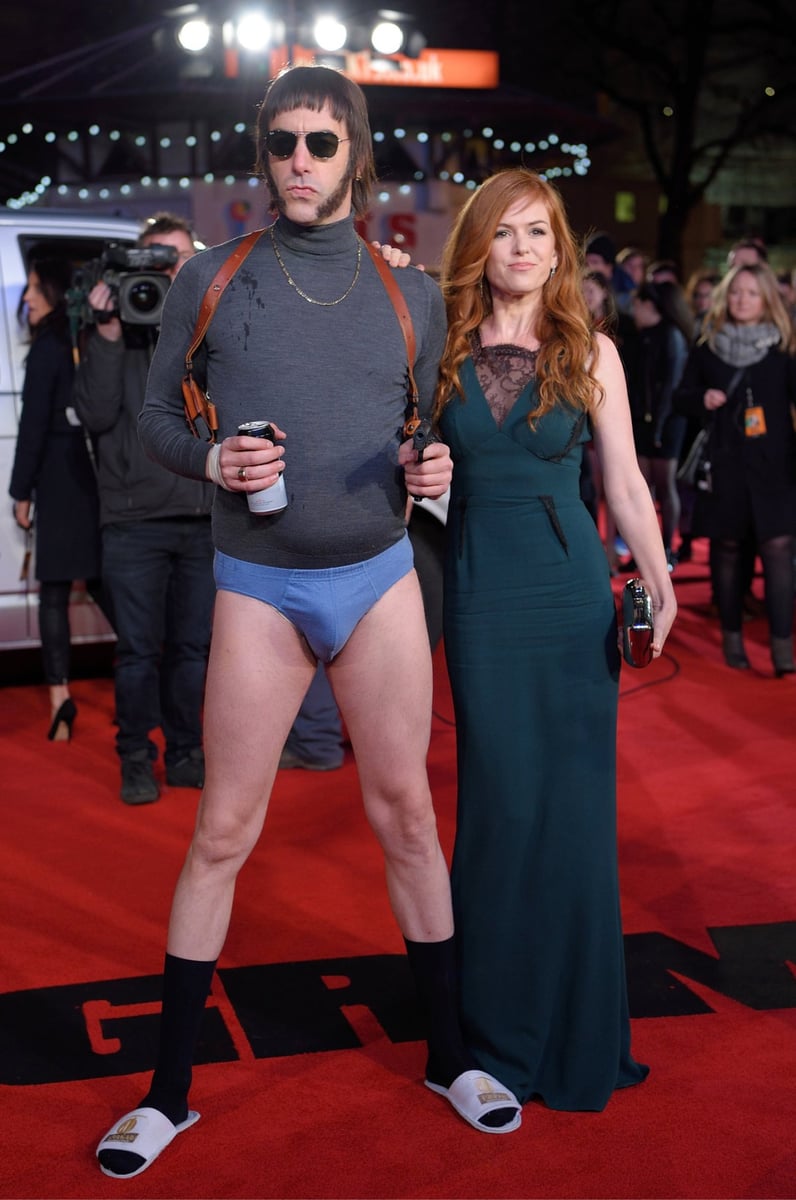 When it comes to the details of their children's lives, that's something the couple made a conscious decision to conceal. They have never shared photos of their kids nor spoken about them in interviews.

"If you speak about your children or if you take them to a red carpet event, you can’t be litigious later on when there is a picture of them in something and say, 'hey, they deserve anonymity,' but they do," Fisher told Today.

"They have rights, too. It’s a very conscious decision and truly I would feel really disgusting about myself if I used my family to sell something. It wouldn’t sit right with me. It doesn’t line up with my values."

"But I do have an open door policy and people come over all of the time. I do big Shabbat dinners. Everybody gets access to my family time once a week."

The actress also spoke to Stellar about her decision to keep her children's life private.

"All parents are just trying to protect their kids. And I feel like if they wanted to be in the public eye that's up to them. If I give any quotes about them, that would haunt them. They will be teenagers one day!" she said.

When speaking to Marie Claire just this week, Fisher reiterated she wants to keep her children's lives as normal as possible.

"I think all parents are trying to protect their kids, especially in the social media age," she explained.

"I want our children to have a normal childhood – being able to play outside without pressure or scrutiny. All kids have the right to just be kids, and I would never sell a film or magazine by speaking about [mine]."

19 years ago today...Missing date nights outside the house 🖤

The pair added to their family last year, with a dog called Maisy.

In 2022, Fisher and Baron Cohen will celebrate their 20th wedding anniversary.

When asked what their "secret" to a long-lasting marriage is, Fisher told Marie Claire: "I wish I had an answer. I’m very lucky to have met him."

"If you speak about your children or if you take them to a red carpet event, you can’t be litigious later on when there is a picture of them in something and say, 'hey, they deserve anonymity,' but they do," Fisher told Today.

"They have rights, too. It’s a very conscious decision and truly I would feel really disgusting about myself if I used my family to sell something. It wouldn’t sit right with me. It doesn’t line up with my values."

Massive respect for taking this stance. If only other celebrities (and social pseudo-celebrities) would do the same!
M
marmaduke a year ago