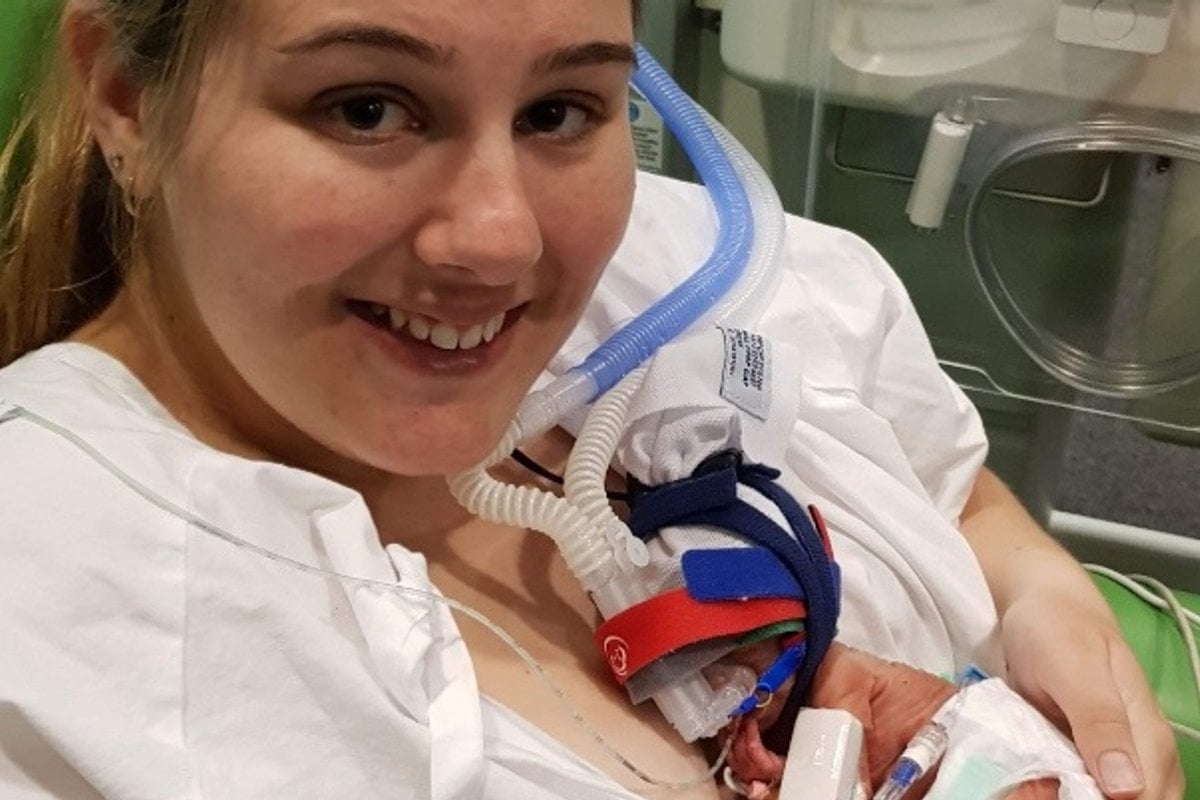 This week we profile Amy Tippett from the Central Coast, who is mum to 21-month-old Mia.

Amy and husband Brad met through mutual friends when they were just 18 years old.

Seven years later, before trying to start a family, they decided on a big trip to the US. As luck would have it, they conceived their daughter in Las Vegas.

“We were absolutely delighted with our little miracle ‘Vegas baby’,” Amy said.

“The first trimester went by with just the normal bouts of morning sickness and tiredness, but at 22 weeks I knew something was seriously wrong.”

Watch: Questions About childbirth, answered by mums and non-mums. Post continues below.

Suffering with extreme stomach pains, nausea and vomiting, Amy did the sensible thing and called in sick to work. She then tried to get an appointment with a midwife but was told to ring back in a week’s time.

“I literally couldn’t eat or hold anything down and I could barely move. They thought it was likely just bad morning sickness, so I just had to stay home.

“After a week of not getting any better, I made an appointment with my GP as I knew I would need a certificate to remain off work. After the GP checked my blood pressure she sent me straight to the emergency department at Wyong hospital for further tests.”

After three hours in the waiting room, Amy was told she had a very rare condition called HELLP syndrome, a disorder of the liver or blood that can be fatal if left untreated. It is usually associated with pre-eclampsia.

“As it is such a rare condition, no one really knew that much about it but I was considered ‘high risk’ and was immediately transferred to Gosford hospital by ambulance.

“Once at Gosford I was set up with drip, but the specialist who came to see me further explained my condition and told me I would need to be transferred to Royal North Shore Hospital in Sydney

“Brad wasn’t allowed in the ambulance with me and by this point I was very scared.”

Listen to Mamamia's pregnancy and birth podcast, The Delivery Room. Post continues below.

When Amy arrived at Royal North Shore, she was taken up to the birthing suit and greeted by a team of around 12 medical professionals.

They did a range of tests including bloods and an ultrasound, and told Amy that while she had made it to 23 weeks, her baby’s odds of survival were not great.

Weighing only 420 grams, her baby was still incredibly tiny and vulnerable.

“I was freaking out! The doctors were unsure how to proceed as my white blood cells were very low and my liver was failing. If they operated they were scared I was going to die, so they kept monitoring me and gave me medication to try and control my blood pressure.

“The doctors also gave me a dose of steroids via two needles admitted into my thigh over a 12-hour period, to help make my baby mature more quickly, in case they had to do an emergency delivery. Miraculously it started making me better as well.

“Brad and I also decided to tell my parents who were away on holidays in the Maldives. We were genuinely not sure at that point if I or our baby would survive. My poor parents then began frantically trying to find flights to get home to Australia to come and see us.”

After 48 hours on the medication for her blood pressure and constant monitoring by specialists, Amy’s condition started to improve. After 72 hours her blood results came back ‘normal’, but that wasn’t to say it got much easier.

“During those initial days in hospital I was not allowed to eat in case I had to be rushed into theatre for an emergency c-section. I was exhausted, hungry and absolutely desperate to keep my baby inside as long as possible. Brad was scared he would lose us both.

“On the fifth day and after an MRI to check my liver and kidneys showed my condition had stabilised, I was released from 24-hour care onto the normal maternity ward.”

Amy spent the next five weeks on bed rest in hospital, terrified her tiny baby was not going to survive either inside her belly or outside in NICU.

“The problem was that our baby just wasn't growing fast enough. The doctors said I needed to get to at least 28 weeks for her brain and lungs to mature.

“I went for my final ultrasound on 29 July 2019 and was told that my baby had to be delivered urgently as there simply wasn't enough amniotic fluid left to keep her alive.”

Early the next morning, Amy was taken to the operating theatre for her emergency c-section with husband Brad and a team of obstetric and NICU staff.

“I was filled with mixed emotions. I wanted to meet my baby, but I was scared she wouldn’t make it. As I lay on the operating table anticipating her first cry, there was no noise at all and I immediately thought the worst.

“But my doctor quickly told me that her eyes were open and ready for the world, before giving me a look at her before she was whisked away to NICU.”

Baby Mia weighed just 520 grams and is still the second smallest ever baby to be born and survive at Royal North Shore hospital. 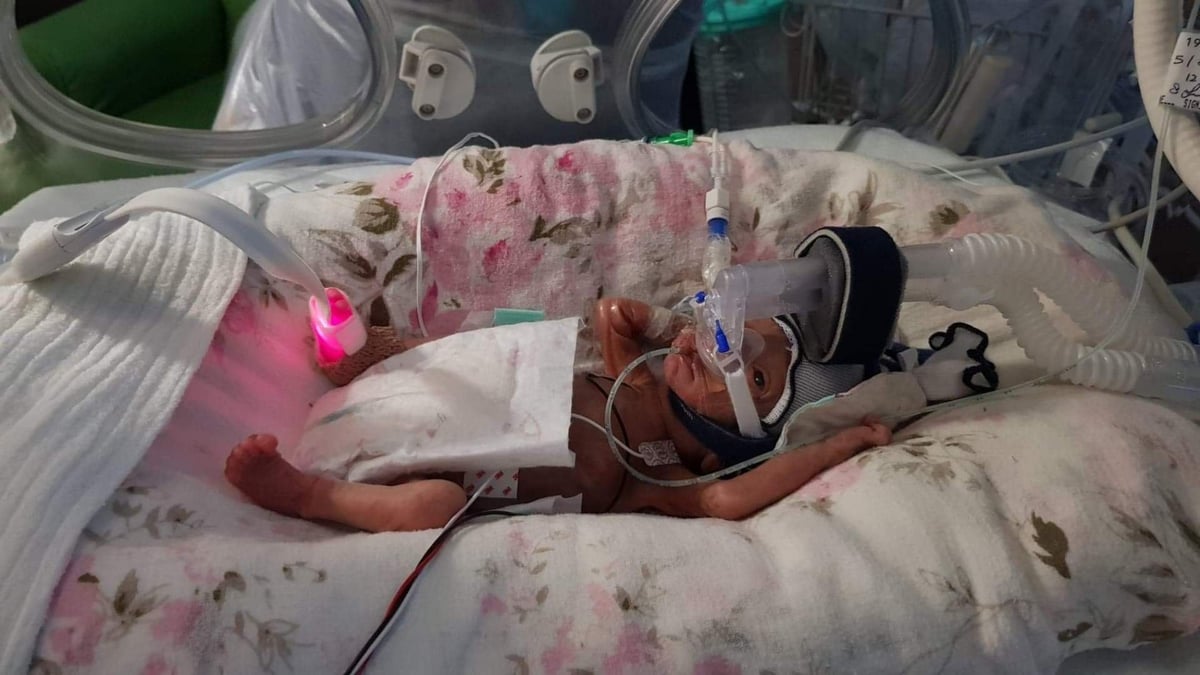 “I didn’t get a cuddle until day seven and even then, she seemed so fragile with a C-Pap mask on her face that attached with tubes up her nose to keep her breathing. She also needed feeding tubes and drips to keep her alive, so it was a very brief skin-on-skin interaction.”

Amy’s blood pressure has already returned to normal, but for poor Mia, her road to recovery was much longer and more complex.

“It was a really emotional time for us. We were overjoyed to hold our beautiful baby after all the bad news, but it was very stressful as she was still so tiny. It was also hard to watch other babies doing better than ours, but we did take a lot of strength from the wonderful staff and other parents of NICU who were in the same boat. 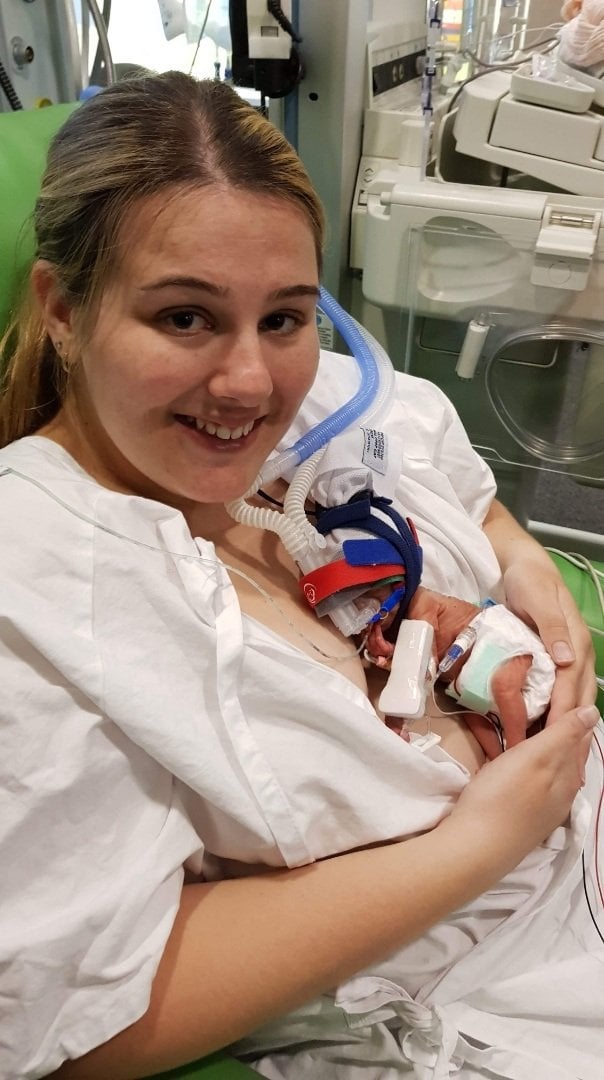 “After 18 weeks in NICU and a total of six months in hospital, we were finally allowed to take her home. She weighed three kilograms and we couldn’t wipe the smiles off our faces the day we put her in the car seat.”

Once at home, the new family had to navigate additional challenges on top of regular newborn life.

“After all the care in hospital, it was weird doing it by ourselves. Mia needed a low-flo oxygen supply for eight months that we had to attach by a tube that was taped to her face. Not an easy feat as she got bigger and more willful! It also meant we didn’t leave the house much during her first five months as it was too difficult.”

Now that Mia is 21 months old and has caught up with her age appropriate milestones, life is a lot more normal. 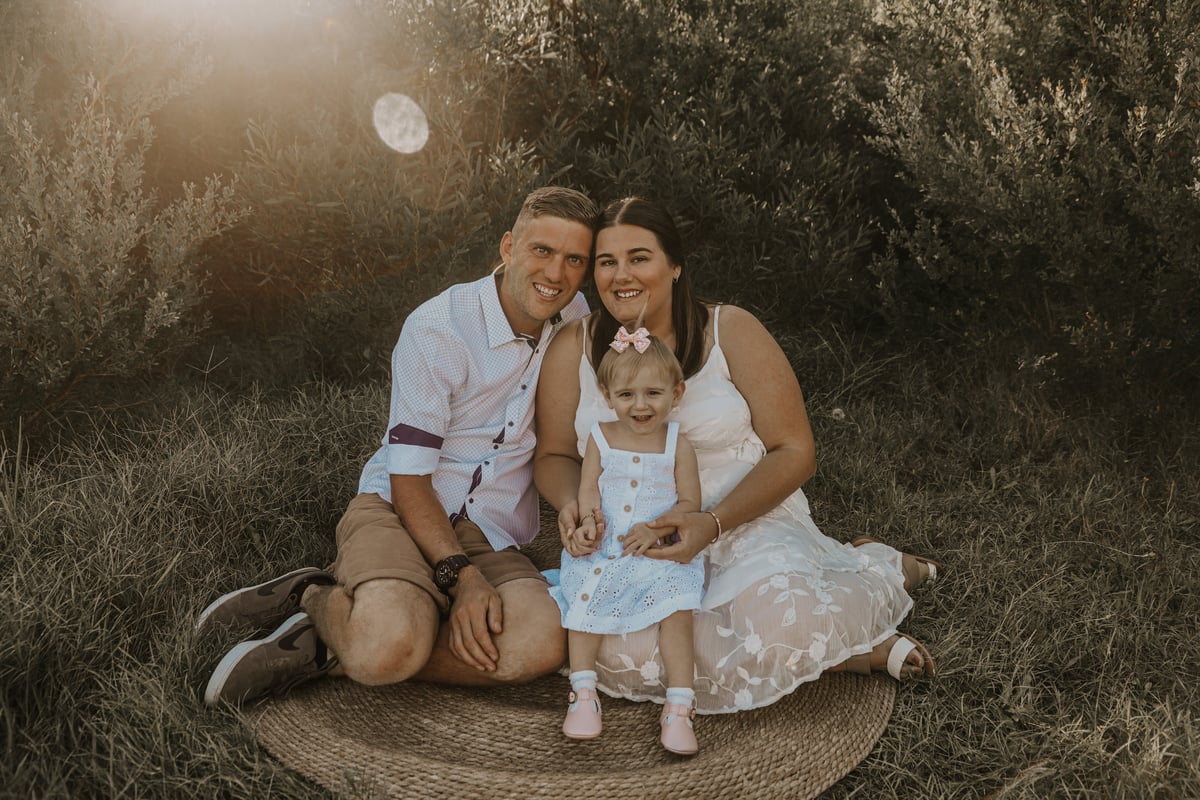 “She is still petite for her age but otherwise she is doing amazingly well.

“I am quite scared to fall pregnant again after all that we went through but right now, I just feel very lucky that we have our one miracle baby girl!”