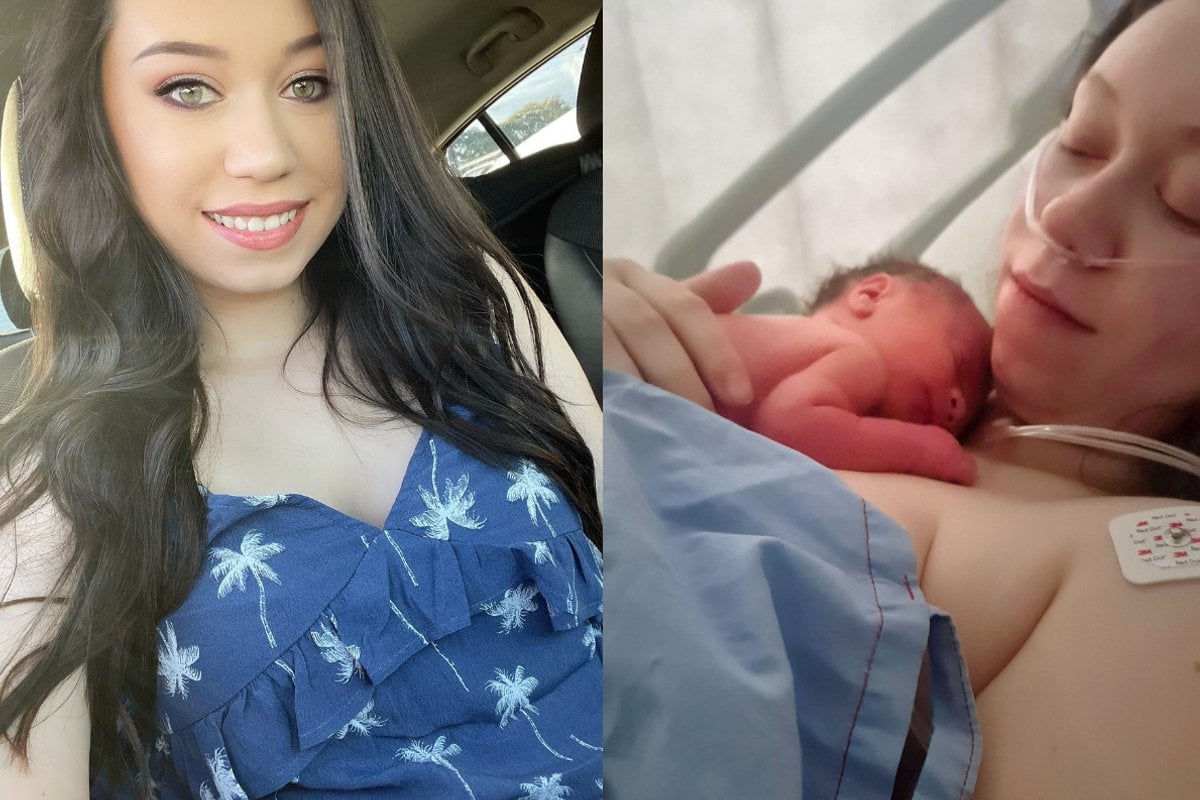 This week we profile Eilish, a twenty-six-year-old retail professional and mum of five-month-old Aluna.

Central Coast-based Eilish met her husband-to-be Brandon on Tinder. They fell in love and left Australia to get married in her home town of Chester in the UK.

“Our wedding was held on 14 March 2020 in Ludlow Castle and the very next day, everything shut and restrictions began,” Eilish said.

“We already had return flights booked, so we were so lucky to get home on an empty plane after a very strange two-week ‘honeymoon’. The pandemic made us question whether or not it was a good time to have a baby, but it didn’t matter as in April I found out I was pregnant!”

Watch: Your questions about childbirth, answered. Post continues below.

The couple were overjoyed by the good news, but an intense period of nausea, on top of challenging lockdown arrangements, meant that Eilish didn't have the smoothest first trimester.

“I work in a small Woolworths and I felt sick every time I moved. I was also nervous about people standing too close to me. Thankfully my employers were wonderful, and after 20 weeks when the nausea lessened and we found out I was having a girl, I was able to enjoy pregnancy for a while.”

A minor car accident at 29 weeks increased Eilish’s stress levels, as did the lack of in-person clinic appointments.

“I had a lot of phone appointments up to 32 weeks and they were really just five-minute chats with a midwife to ask me how I was doing.

“As this was my first baby and I had been feeling stressed, I pushed for a hospital appointment at 33 weeks. I'm so thankful that I did as when the midwife checked my blood pressure, it was extremely high. When it didn’t go down, she called the doctor who requested a rapid response team come in and I was admitted to hospital.

“I remember shedding tears, I was scared, I was alone and I saw concern on all the other mums-to-be’s faces. I just thought, please let my baby be okay. Please don’t take her.”

The next day when the doctors came to assess Eilish, they told her that her blood pressure was still high and needed monitoring. She was also told she wouldn’t be going home until after the birth.

“It was a confusing time as every doctor or midwife who came to see me said something different! One would say that they just needed to get me past 34 weeks, but another would say they wanted to keep me here until my due date.

“There were no straight answers and the communication was inconsistent. Because of the pandemic I couldn’t have visitors other than my husband and mother-in-law Vicki, so that was difficult too.”

An ultrasound technician was the first person to tell Eilish she had pre-eclampsia.

“It felt inappropriate that my official diagnosis came from her and my heart sank as I knew that was not good news.

“At home I hadn’t even packed my hospital bag, I hadn’t finished my baby’s room or washed all of her clothes. I couldn’t believe this was happening.”

At 34 weeks and four days, and after another scan and check-up, the medical team decided it was no longer safe for Eilish to remain pregnant.

“The placenta was suffering, so the doctor told me I would be induced that night. She told me I should have the Foley balloon catheter inserted, which terrified me but I didn’t feel like I had a choice.”

At 6pm Brandon and his mum arrived, and the three were transferred to the birthing suite. At 11pm the doctor on the night shift came around to start the induction and explain what was going to happen next.

“I voiced my concern about the balloon method as the doctor assumed I had chosen it. Thankfully, she told me I could go with the gel instead, which I was much more comfortable with.”

After the gel was applied, Eilish was told to try and get some sleep. Early the next morning she was hooked up to a hormone drip and almost immediately the contractions began.

“After about four hours of labour, the baby’s heart rate dropped. They tried adjusting the flow of the drip to help, but it soon became apparent from just watching my doctor and midwife interact that I would need a c-section.”

“I remember being asked to sign permission forms for theatre as my contractions were getting closer together - it was all happening so fast. They topped up my epidural before starting the surgery and promised me that in a few minutes I would be numb. There was one midwife with the voice of an angel who, in the midst of the chaos and terror, was trying to keep me calm.”

The obstetrician explained to Eilish what was about to happen and that it should just feel like a ‘washing up’ sensation in her abdomen, but after only a few minutes, Eilish felt intense pain.

“I felt this shooting pain from my pelvic bone all down my legs and I screamed out the word ‘pain’ as I had been told to do. A doctor placed a mask over my face for the general anaesthetic and I remember breathing fast and hard thinking that the sooner I pass out, the sooner I can meet my little one.”

At 5.19pm baby Aluna was born weighing just over two kilograms. She was rushed to NICU with dad Brandon at her side and a little feeding tube in her arm while Eilish was sent to recovery. Eilish was finally allowed to hold her baby girl for the first time at midnight.

“It was a moment to remember. She was given to me for skin-on-skin time and she was so little. I couldn’t believe she was finally here after all we had been though together.” 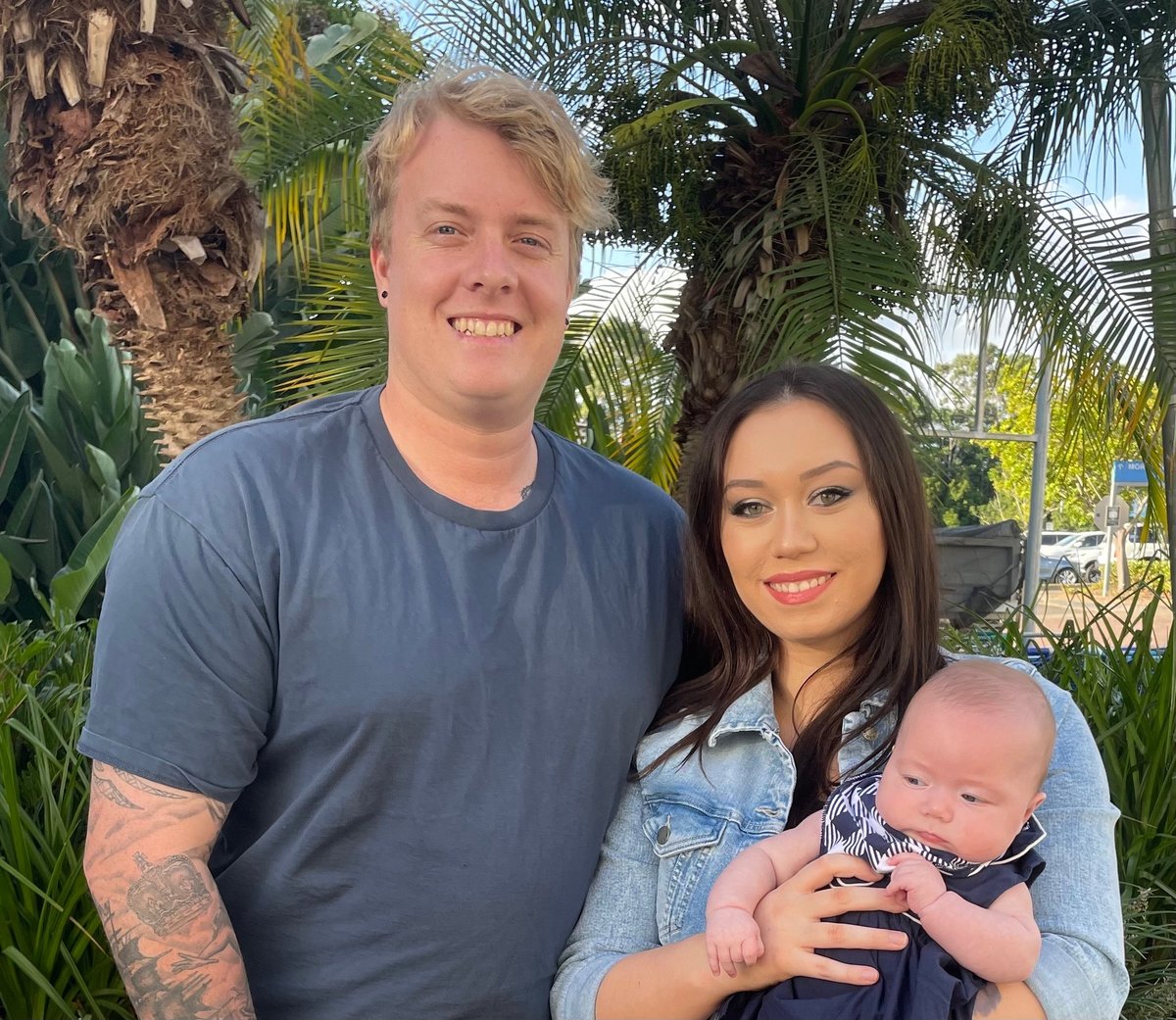 Eilish was in the maternity ward for four days before moving into Aluna’s private room for another week.

“It was an absolute nightmare getting up and down off the pull-out bed and it was great when I got to get out and go home. I tried breastfeeding, but it wasn’t really working and as she was so tiny, I moved quickly onto formula feeds.

“Now that Aluna is five months, she’s only slightly behind the usual milestones for her age and stage and I am just enjoying hanging out with her. I have been told because of my history with pre-eclampsia there is a risk it will happen again, but at least if it does, I will know exactly what to expect and I’ll go into another pregnancy and birth with my eyes wide open!”

Read more birth stories here, or find some of our favourites below: