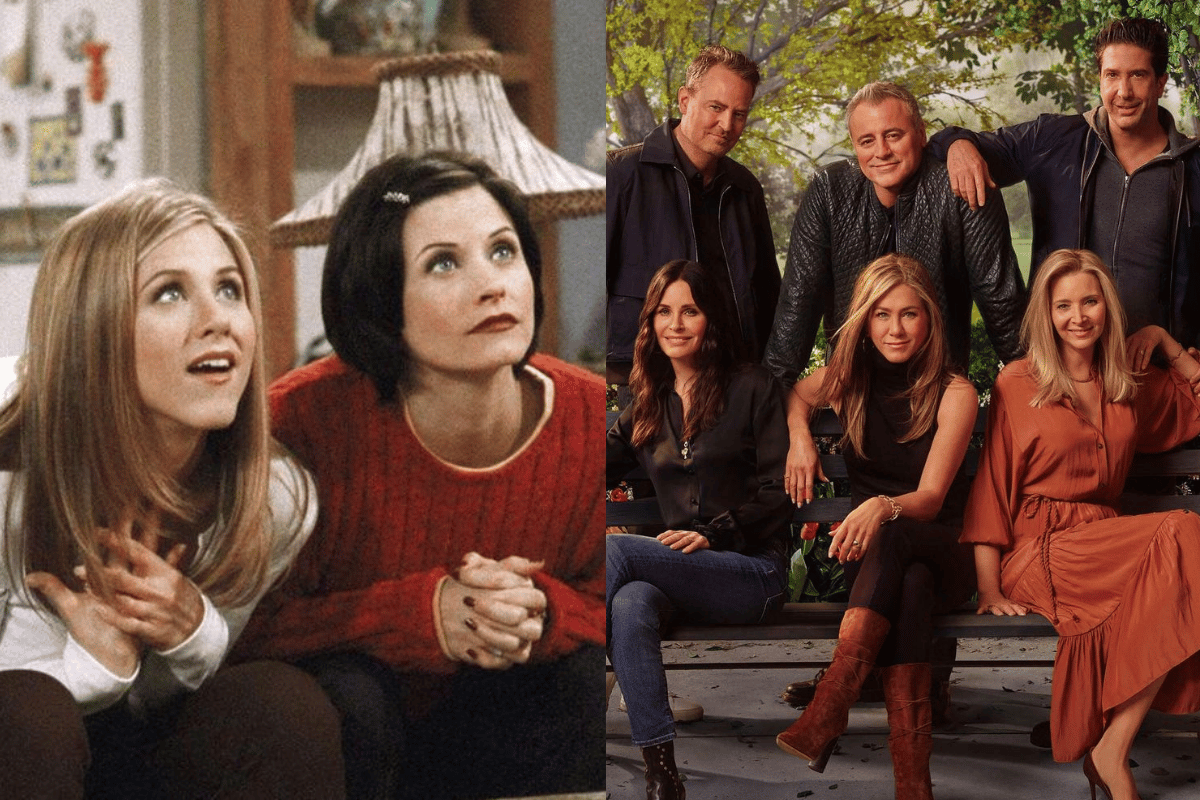 Stop everything. The cast of Friends is officially making a comeback, 17 years after the final episode aired.

The long-rumoured special will air on HBO Max in the US this month in honour of the show's 25th anniversary. (Sorry, no word yet on how we can watch it here in Australia.)

And yes, all six friends will be returning, plus they'll be taking on the reigns as executive producers.

While the special won't follow the usual format of a regular episode, we'll still get to see the cast reunite, revisit the set and share behind-the-scenes footage.

"In order to avoid any misunderstanding about what this special is, we want to make it very clear that this is not a new, original episode of the series. The cast will be appearing as themselves, not as their beloved characters," HBO Max explained in a statement.

The trailer was released today and it already has us feeling all the emotions.

The reunion special was first announced back in February last year when the six actors posted to their respective Instagram accounts, "It’s happening".

Few shows have entered our lives via the small screen and been as fundamentally formative as Friends has. It was a once-in-a-generation phenomenon, that continues to be passed down like a treasured heirloom.

Precisely no one wants to think about how many hours we’ve all wasted watching pretend characters deal with pretend scenarios about pretend dramas. Alas, we’ll continue to watch Ross Geller shout “PIVOT” at Rachel and Chandler for the 987th time in preparation for the reunion.

In the meantime, here's where the main cast members are now.

Jennifer Aniston, who played Rachel Green, has arguably emerged as the most successful actor to come from the series.

In 2018, she was third on Forbes' list for highest-paid female actors, behind Scarlett Johansson and Angelina Jolie.

Schwimmer had a break from sitcoms after Friends wrapped up in 2004, and remained out of the spotlight for a number of years - instead opting to work as a director for indie films.

He also has been the voice for Melman (the giraffe) in the 2005 animated film Madagascar and 2013's Madly Madagascar.

In 2016, Schwimmer told US Today that the height of success reached by Friends "messed" him up.

"It was pretty jarring and it messed with my relationship to other people in a way that took years, I think, for me to adjust to and become comfortable with."

Also in 2016, he returned to television to play the role of Robert Kardashian in The People vs. O.J Simpson: American Crime Story - for which he was nominated for an Emmy.

He also played a role in the reboot of Will & Grace for seven episodes in 2019 before starring in the TV series Intelligence last year.

After Friends, Matt LeBlanc starred in the spinoff series Joey from 2004 until 2006 - although it never reached the success enjoyed by Friends.

From 2011 through to 2017, LeBlanc was in the successful comedy show Episodes, in which he played a satirical version of himself.

Now, LeBlanc stars in and is the executive producer of the People’s Choice Award-winning series Man With A Plan, which has been on air since 2016 and sees a reported five million viewers tune in each week.

LeBlanc has since reflected on his time on Friends, telling Radio Times he has nothing but fond memories.

"I had a blast for ten years. I remember going home at night and my sides hurting because I’d been laughing so hard," he recalled.

After Friends, Courtney Cox played Jules Cobb in the wildly successful series Cougar Town from 2009 until 2015.

However, she hasn't been in any films or had recurring television roles since 2016.

Her focus has mainly been on behind-the-camera work, including 2014's Just Before I Go. Her directorial work has not been well-received.

Courteney Cox, now 56, has also opened up about her appearance, saying in 2016 that she regrets undergoing cosmetic procedures.

"I was trying to keep up with getting older and trying to chase that,” she admitted, continuing, "Getting older is not the easiest thing. But I have learned lessons."

When Matthew Perry starred as the loveable underdog Chandler, he was one of the world’s most recognisable faces.

But behind the scenes, Perry was suffering from drug and alcohol addiction - later admitting he often showed up to set “painfully hungover”.

"I was on Friends from age 24 to 34. I was in the white-hot flame of fame. The six of us were just everywhere all the time. From an outsider's perspective, it would seem like I had it all. It was actually a very lonely time for me because I was suffering from alcoholism," Perry told E Online in 2013.

The actor has been in and out of rehab since 1997 for his addictions.

From 2013 until 2015, Perry operated his own rehab facility in Malibu specifically for recovering alcoholics.

As for his acting career, he hasn't starred in a film since playing Mike O'Donnell in 17 Again alongside Zac Efron.

After Friends, Kudrow has continued her successful Hollywood career and starred in a number of high-profile films, including P.S. I Love You, Easy A, Neighbours, The Girl on the Train and, most recently, Like a Boss.

She also does behind-the-scenes work, and is an executive producer on Who Do You Think You Are in the US.

Kudrow has also opened up about the pressure she felt to maintain her physique while starring in the popular sitcom. The actress said it was never easy, adding that watching herself back on screen would often fill her with insecurity.

“You see yourself on TV and it’s that ‘Oh my God, I’m just a mountain of a girl’… I’m already bigger than Courteney and Jennifer, like my bones feel bigger,” she said on the WTF with Marc Maron podcast. “I just felt like this mountain of a woman next to them.”

The 57-year-old also just celebrated her son Julian's graduation from the University of Southern California.

"Happy proud HAPPY. And a little crying. By me not him," she wrote on Instagram, alongside a photo of the 23-year-old.

The reunion special will air on HBO Max on Thursday, May 27. At this stage, there's no word yet about how Aussie audiences can watch it. But in the meantime, you can also stream Friends on Stan now. (You know you want to.)

It's amazing how self-perception can turn against someone, Lisa Kudrow always struck me as very slim, and in fact, Courtney Cox slipped into the little too gaunt category at times.