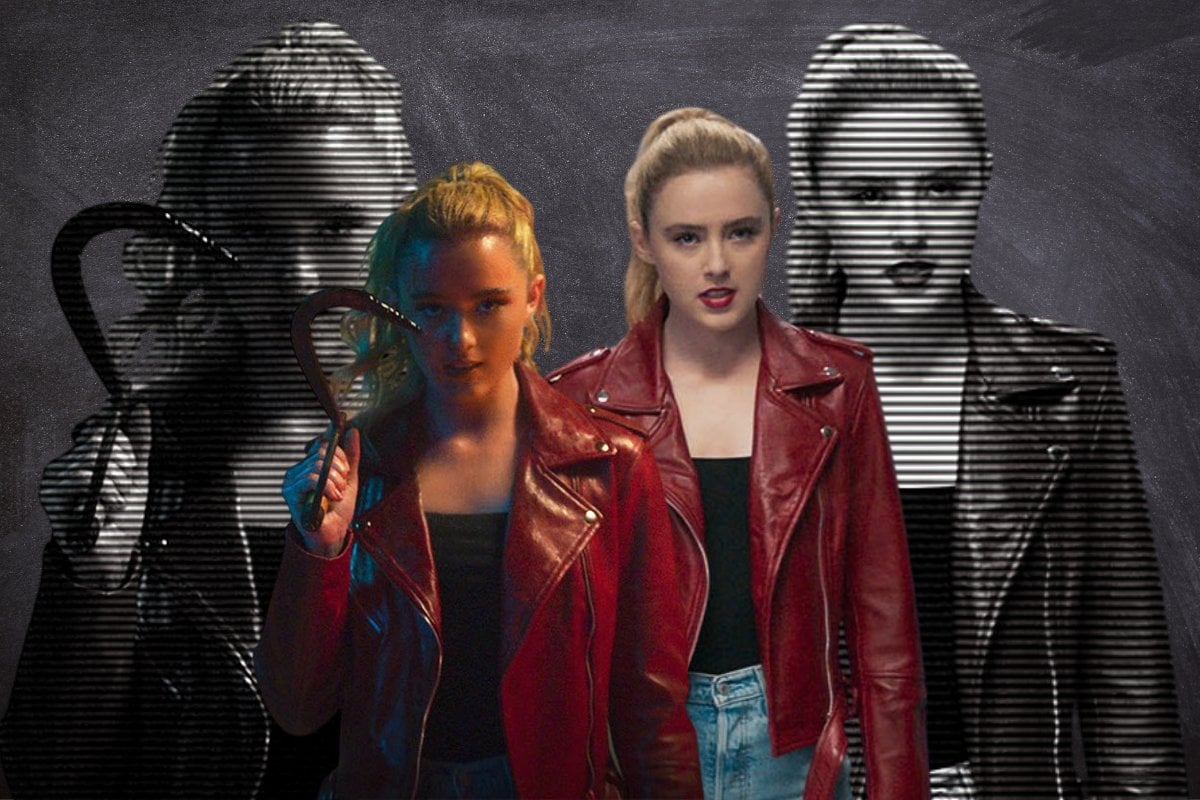 If classic movies Freaky Friday and Scream ever had an illicit love child, it would look exactly like the new slasher flick Freaky.

The new horror-comedy takes all the old slasher standbys (teenagers who are stalked by a serial killer, a handful of gruesome death scenes, and a high school romance) and mixes them up with a comedic body swap element popularised in movies like The Hot Chick.

In true teen slasher style, the main character is a sweet high schooler named Millie (played by Big Little Lies and Blockers actress Kathryn Newton) who comes off a little awkwardly in class, sticks with her own tight-knit friendship group, and has a slightly embarrassing gig dressing up at the football team's mascot.

Millie's home life is not also not so rosy.

Her father has recently passed away and her older sister is becoming increasingly angry with their mother's inability to cope with life after his death. All this leads to her downing a few bottles of wine and passing out at home, leaving Millie stranded all alone at school after dark, even though there has been a string of recent high school murders in the town, and it's well known that a killer is on the loose.

There's a truly eerie moment in the film where Millie realises that a tall figure is watching her from a distance, and as her luck would have it, it's the same killer who has been laying waste to teens across town: the Blissfield Butcher (Vince Vaughn).

A chase sequence ensues and just as Millie is resigned to being the next name on the butcher's kill list, he throws her to the ground and stabs her with a magical dagger.

One that has the power to switch their bodies, leaving Millie in the body of a six-foot-tall killer who the town is on the lookout for and the butcher in Millie's body, allowing him to easily prey on her friends and family. 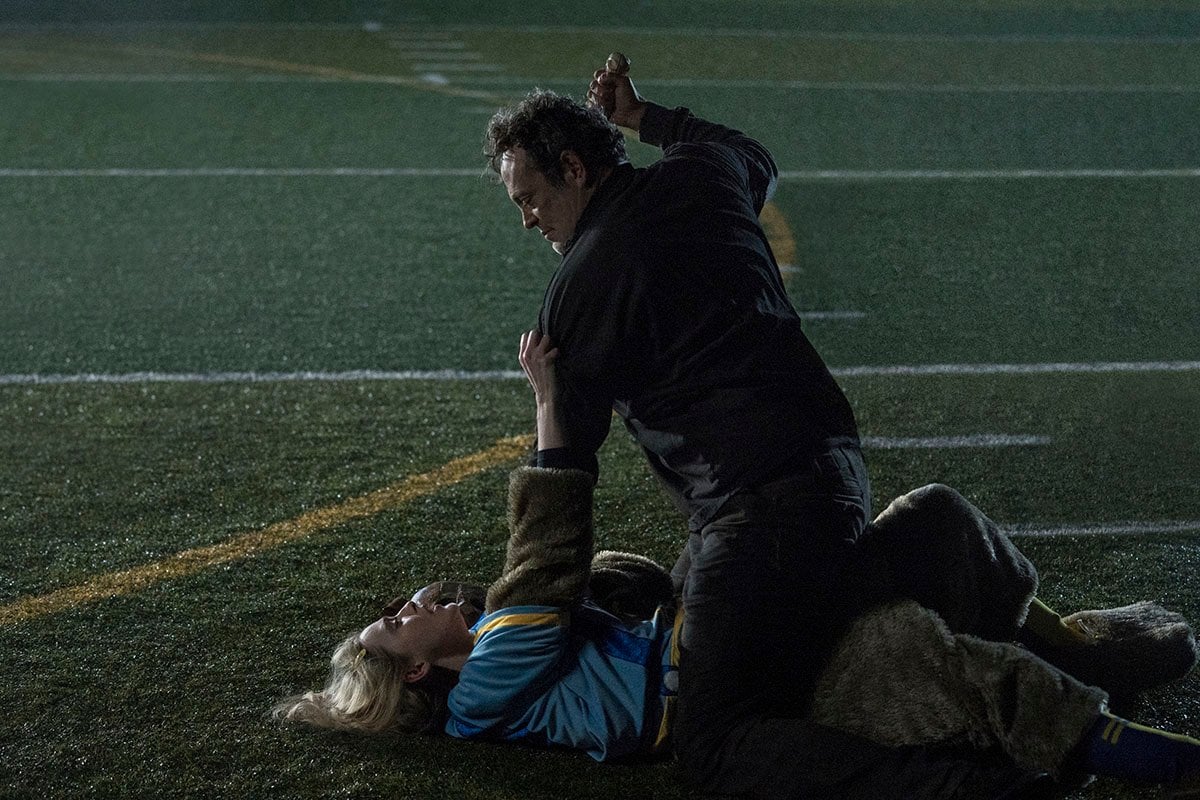 "He throws her to the ground and stabs her with a magical dagger." Image: Universal Pictures.

Kathryn Newton is no stranger to telling action-filled stories with an otherworldly element, having starred in the hit show Supernatural and played the lead character in Netflix's The Society.

But what really drew the 23-year actress to star in Freaky was the opportunity to immerse herself in the mind of a serial killer while sharing and crafting two different characters alongside film veteran Vince Vaughn.

"When I was getting into the mindset of the killer, I was trying to be that killer that the horror fans wanted," Kathryn told Mamamia. "I really wanted them to get scared and be along for the ride.

"...and I have really tried to kill people, for real," she joked.

"The moment I met Vince, I didn’t know I was going to be meeting him that day. I was in the middle of a dance rehearsal and here comes Vince. I thought 'well, this is going to be a giant ice-breaker for us' and it was.

"I got so much inspiration from him and we really created Millie and the butcher together. I thought at first that maybe I was just going to be imitating Vince Vaughn throughout the movie which is just wrong, no one else can ever be Vince Vaughn.

The physicality of on-screen serial killers is something that Kathryn doesn't take as a joke, having to perform a series of chainsaw-wielding stunts while playing the butcher trapped in Millie's body.

"There’s always some kind of surprise, especially when you’re filming a horror movie," she said. "You’ve got to be ready for something to happen."

"There were a lot of stunts in this movie so I had to do a lot of training, which was annoying because that meant I didn’t get to hang out with everybody else on set.

"I had a lot of fight sequences and it’s kind of like learning a routine. I was hanging off stuff and using a chainsaw. My stunt double was teaching me to do doughnuts and go really fast so I was giving everyone a heart attack.

"But that’s part of the fun and who doesn’t like being a serial killer? Also, I had to learn how to use a chainsaw and they are very difficult to turn on. It’s not a joke." 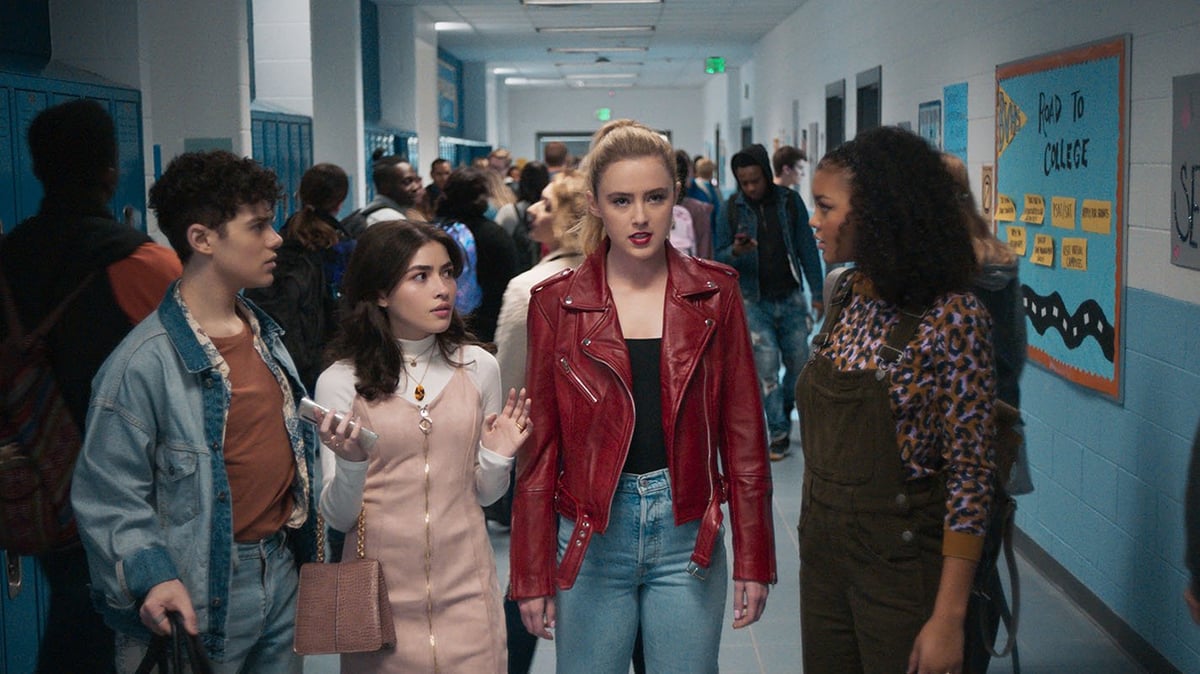 Although it contains a new twist, Kathryn says Freaky has a classic slasher movie feel.

"I would go to the midnight screenings of the Paranormal Activity as a kid," she said. "That was my introduction to horror. I love that aspect of it, that you’re signing up to get scared, to start sweating and screaming.

"I am also just such a scaredy cat, I take it home with me so I can’t watch them alone anymore.

"But Freaky just felt so classic to me, I saw myself and my friends in this movie but I also saw clichés and tropes just be completely destroyed.

Freaky is out now in Australian cinemas, it is rated MA15+.