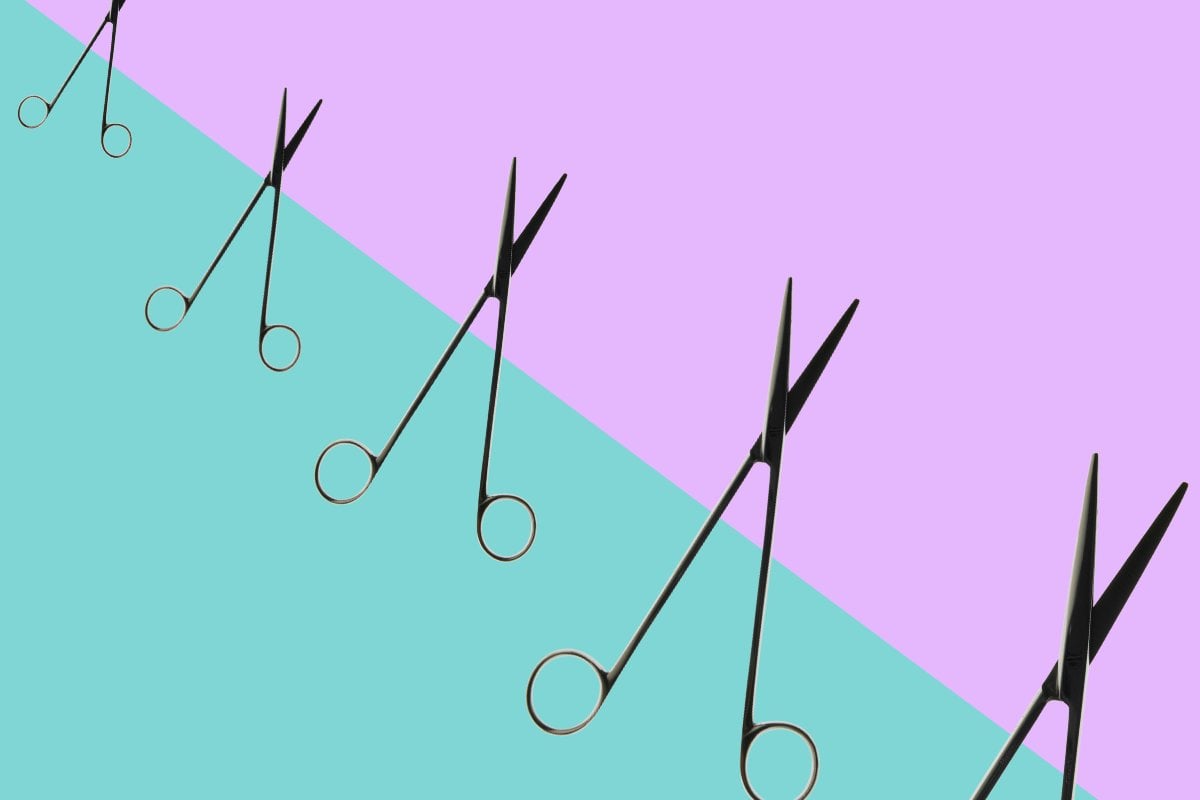 Did you know that six times as many women have their tubes tied (tubal ligation, if you wanna get fancy) as men receive vasectomies?

Even though vasectomies are one of the safest and most effective procedures (FYI: tubal ligation is way more expensive, invasive and dangerous - plus, there is a risk of ectopic pregnancy) - it's still very much an under-used birth control option.

So, what's the go? Why aren’t vasectomies anywhere near as widely used as tubal ligation?

Watch: Dax Shepard on his vasectomy. Post continues below.

Well, for starters - there's pretty much zero awareness around it. It's literally crickets out there.

There's also this massive cloud of misplaced anxiety hanging around 'getting the snip', and there's this way of thinking that by undergoing this procedure, it will somehow make a man less... manly.

My boyfriend got the snip. I got all the pictures.

These murky myths and stigmas that continue to linger around vasectomies have no doubt halted the acceptance of the procedure - even for those men whose families are already 'complete'.

It's 2021 - and both men and women should have access to the whole range of birth control options available, yeah?

Listen: Here's what no one tells you about the pill and men. Post continues after podcast.

So, if you and your partner are looking for birth control options and have considered a vasectomy, but have some burning questions that are pulling you back - we got you covered.

We spoke to Dr Stephen Massey from Bondi Doctors and asked him everything we have to know about vasectomies.

What is a vasectomy?

"Commonly known as 'the snip', a vasectomy is a male sterilisation procedure that involves cutting a duct in the testes to prevent sperm entering the semen," explains Dr Massey.

This means that while orgasm and ejaculation happen as normal, the only difference is that the sperm won't make it out of the body.

"My partner is having a vasectomy. Why is everyone acting like that makes him a hero?"

After the procedure, the risk of pregnancy involving a man with a vasectomy is extremely low - it's less than 1 per cent.

What are some common myths surrounding vasectomies?

One of the most common myths surrounding vasectomies is that it will reduce testosterone levels and sex drive.

"Libido is complex and influenced by many things, however having a vasectomy isn't one of them. It won't affect testosterone levels which is the main hormonal diver of sexual function in men as the testes still function normally," confirms Dr Massey.

So, yeah - that excuse can be immediately binned.

Dr Massey said another common concern surrounding vasectomies is people worrying that the procedure may affect their semen.

"Most of the semen is produced by glands, such as the prostate, and this is unaffected," he said. "There will be no sperm, however these make up only a tiny percentage of the total volume and the change will be undetectable."

What's involved in a vasectomy procedure?

There are a number of different types of vasectomy procedures, but Dr Massey said the standard procedure involves "making a small incision in the scrotum and removing a section of the vas deferens, which is the tube that carries sperm from the testes".

The procedure is typically performed under anesthetic to prevent pain and discomfort.

"It can be performed under local (awake) or general (asleep) anaesthetic. Fainting is not uncommon during the awake procedure, so unless you're SAS I generally advise patients to opt for general anaesthetic," said Dr Massey.

In terms of downtime, your partner can expect to feel sore for a day or two after this procedure. It's pretty common for men to take Friday off work to have the vasectomy and then go back on Monday.

"Testicular pain and swelling are to be expected and most men will require a few days off work," said Dr Massey. "Some paracetamol and a few bags of frozen peas are usually all that's required."

Your partner will also be asked to abstain from all sexual activity for about a week - and just keep in mind that he can have live sperm in his semen for several weeks after the procedure. So, usually this will mean that one of you must use a different form of birth control until the urologist gives your the all-clear.

Can a vasectomy be reversed?

So, let's just say you change your mind and now you want it reversed. Whoops! Is this a thing you can do?

Well, while vasectomies can be reversed, this doesn't always guarantee success in conceiving a child - and the surgery is more complicated than a vasectomy (your doctor basically has to re-attached the two tubes so the sperm can reach the semen).

This form of permanent contraception is more common than you think.

"There is a reversal procedure, however it is unreliable," said Dr Massey. "Men should consider vasectomy an irreversible procedure and I advise men not to proceed if in any doubt about future family plans."

So, yeah - you're going to want to be fairly certain that this is the right procedure for you and your partner.

What are the risks associated with vasectomies?

"Longer-term testicular pain has been reported in around one per cent of men, however this is likely lower with newer techniques," said Dr Massey.

"There is a failure rate of less than 0.1 per cent, which makes it the most reliable contraceptive option."

Do you have any burning questions about vasectomies? Hit us up! Share with us in the comment section below.

E
ehawkley a year ago

Reply
Upvote
1 upvotes
I can’t comment on the rest of Australia but in WA the largest private health provider is Catholic and therefore don’t support contraceptive procedures in their hospitals, even tubal ligation is prohibited following C section.
I would imagine vasectomies being minimally invasive would be the preferred surgical option (almost exclusively) as they can be performed in healthcare settings other than hospitals.
Personally I don’t know a single person who has had a tubal ligation in WA.
S
snorks a year ago

Reply
Upvote
1 upvotes
@ehawkley Going public is easy enough though. When I had mine they just told me turn up on X date, you'll be the 6th one that morning.
Had to have mine in hospital, but i'm in a regional area so might not have all the options.
S
snorks a year ago

Reply
Upvote
5 upvotes
According to Sterilisation in the United States in Obstetrics and Gynecology around 700,000 tubal ligations are performed every year and 500,000 vasectomies are performed every year. I'm sure we are different than the USA, but not THAT different.
Anecdotally, all of my friends who have finished having kids have had vasectomies. The only outlier being the guy who's wife had a hysterectomy.
Despite all the links in the article I couldn't find anything to back up the 6 to 1 ratio.
K
km a year ago

Reply
Upvote
6 upvotes
@snorks .... I agree. Nearly all my friends husbands and my husband happily went and had the snip after we had finished our families. They were all fantastic... all agreed that the girls had taken care of the contraception for many many years and it was the least they could do. My hubby was sore for 2/3 days then good as gold.
R
random dude a year ago