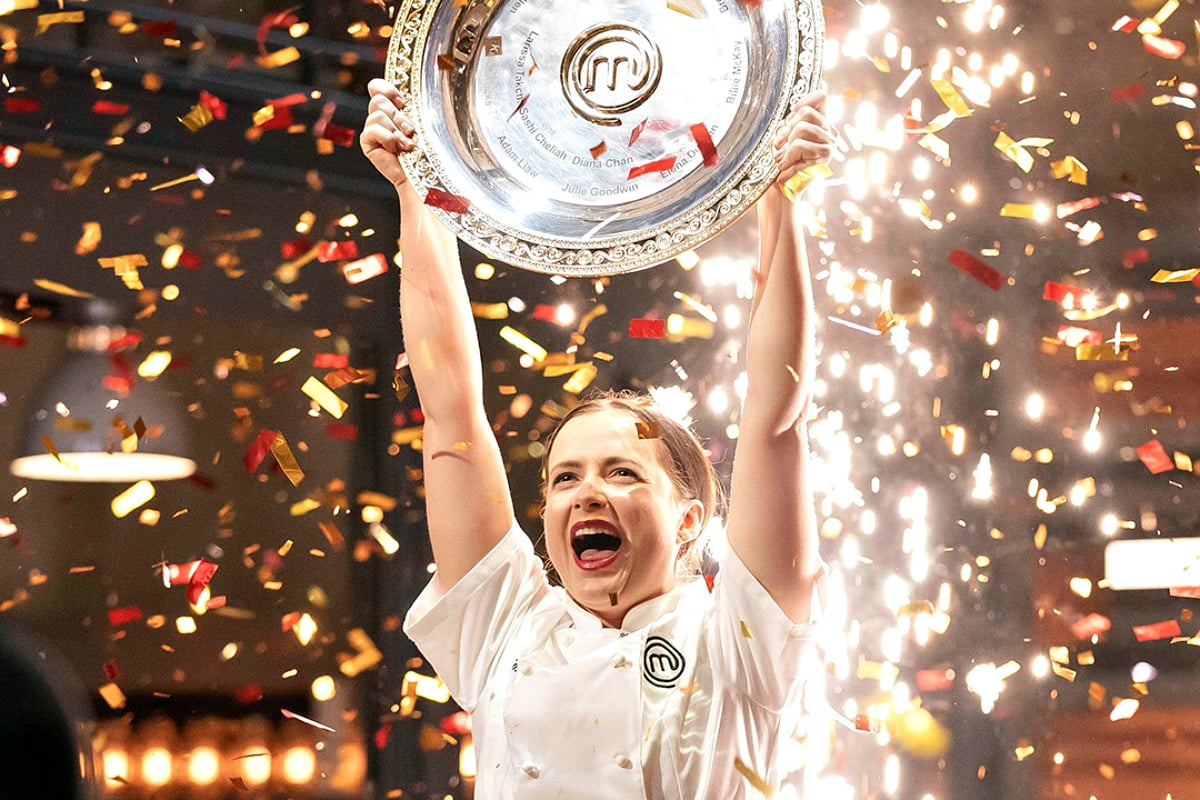 To catch up on all things MasterChef Australia 2020, make sure you check out our ﻿MasterChef hub﻿. We’ve got you completely covered.

Emelia Jackson describes her personality as "a slow burn", the kind that takes a while to reveal itself.

In a genre of TV so often stacked with big, screen-time baiting personalities, the MasterChef: Back to Win star was certainly among the quiet achievers of this season.

And achieve she did.

Watch: Just 30 seconds of pure joy as Emelia is crowned the winner. (Post continues below.)

After 15 weeks and 61 episodes, the Victorian was last night crowned the winner of the stalwart cooking competition, which rested on a final three-course tussle with her close friend, Laura Sharrad.

As she hugged her competitor after the announcement, microphones captured her repeating one word: "sorry".

"It was really bittersweet," Emelia told Mamamia. "There was a range of emotions to navigate. I was so excited and just felt over the moon to have won, as you would expect. But then that was matched with instant heartbreak for Loz, because the competition meant so much to her. She put her heart and soul into it."

Emelia's win came on the back of a flawless pistachio financier dessert, and what appeared to be a recent surge in confidence.

﻿Over the past few weeks viewers saw the true depth of her self-assuredness and wit.﻿

Andy "Can you not think of plan b and a primary cut"
Emelia "Nope - that's not what I want to present".

That's the Emelia we've all grown to love. Go for it! #MasterchefAU

"This is going to sound funny, but he'd started watching the Michael Jordan documentary, The Last Dance. And every day, he'd call me in the morning and give me these pep talks. It was like I was going into battle," she laughed.

"It's just amazing how positive thinking really works. I never thought it worked before, but my whole thought process changed. I [used to] go into every challenge thinking, 'Don't do the worst today,' and that became, 'Win this challenge. Do the best.'"

With the new-look MasterChef done and dusted, The Spill team look at what makes a successful reboot. (Post continues below.)

But as Emelia's confidence soared, that of some of her fellow contestants was being chipped away at by armchair critics.

Laura Sharrad, in particular, endured weeks of attacks and cruel comments through social media for being confident, ambitious and frequently leaning on her skills with pasta (she runs an Italian restaurant in South Australia).

Emelia said it was frustrating and upsetting to watch that happening to her friend and fellow Season 6 alumna, and she has little doubt that it was gendered.

"All those all things filtered through, and they are really damaging," she said.

"Going on a show that's built around skill, it's really exposing; you open yourself up to, not just criticism from the judges, but criticism from all of Australia, it seems. And I get frustrated that instead of it being a celebration, which it seems to be for the boys, it has to be a negative experience for the girls," she said.

"It took everything I have in me not to bite back at it. Because I just think it's so, almost, short-sighted. A lot of the vicious criticism comes from other females, and I think that's born from insecurity, to be honest."

As Emelia felled giants of the show, she too earned the odd comment from keyboard warriors questioning whether she was "deserving" of her position. As did Poh Ling Yeow.

"I get that we're on TV, but we're definitely just humans trying our best. And the thing is, 99.9 per cent of those [critics] wouldn't have the balls to say it to your face," she said.

"I just wish people would be more considerate."

Still, she's had plenty of people in her corner: fans, friends, her partner, with whom she bought a house in December, right before filming started.

And now she's focused on putting her $250,000 prize money into boosting her cake business with a range of luxe packet mixes. (You can already buy her finale-winning financier mix via the Emelia Jackson website. She insists it's a simple "just add butter and water" situation, so culinary muppets like this writer don't have to miss out.)

To those struggling to back themselves in their own ventures, she offers this advice:

"Women need to drop the preconceived notion that we have to fit a mould. We can be whoever we want to be. I'm not big on affirmations, but if you're finding yourself stuck in this mindset where you think you're not good enough, actively work on that, actively tell yourself that you're good at something, tell someone else that you're good at something. Everyone is amazing at their own passions, and I really think that we should own that more - we should celebrate it and own it."