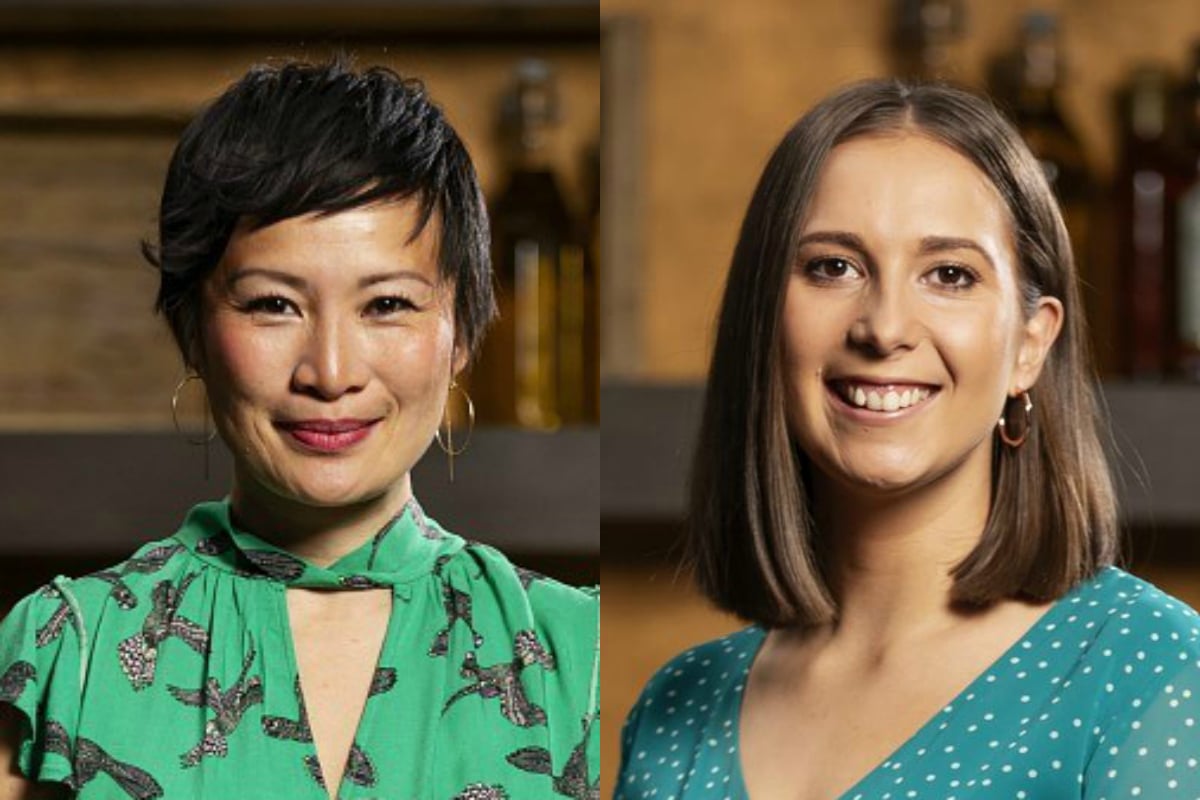 If you're having a moderately good day, don't type the words 'Laura MasterChef' into Twitter's search field. Just don't. It's not pleasant.

You'll be confronted with tweet after tweet in which people share how desperate they are for a perfect stranger to publicly fail, threaten to "riot" if she wins, and use words like "smug" and "painful".

Actually, while you're at it, steer clear of 'Poh MasterChef' as well.

Watch: Poh wants to learn how to slow down.

It seems some viewers of the revamped 'Back To Win' season have been so indoctrinated by the typical reality TV formula, that they're desperate to cast the series' villain.

But this isn't The Bachelor or Big Brother; these women aren't manipulative, savage characters planted by producers.

So why are they being treated as such?

Her primary offence, according to her critics? Frequently cooking the thing she's best at cooking... because, you know, she's trying to win a cooking competition.

"Omg, shocker, Laura is making pasta." "The pasta lady who makes pasta everyday at the pasta restaurant she owns is cooking a pasta dish. Again. Fantastic." "If Laura wins, we riot."

As a chef at an Adelaide pasta bar, Laura has leant on her skills with dough to keep advancing through the competition.

The woman is playing to her strengths, much like Reynold does by opting to make desserts whenever possible, or Brendan when he chooses dumplings.

Twitter: ‘Yeh, but we know that you thought of making pasta, so we are still gonna hate on you’

When she won the immunity challenge this week on a dish of brown butter Moreton Bay bugs with Jerusalem artichoke and watercress oil, accusations were being flung around social media that she only triumphed because she'd "never won before".

Yes, these armchair/keyboard critics decided the only way Laura could succeed is if the producers decided it was "her turn".

This is not a Year 3 talent quest, folks.

The victory has no doubt bolstered claims of favouritism that have been lobbed at Laura since the early days of the season. Right at the beginning, it was declared that she previously worked at Restaurant Orana, the award-winning venue owned and operated by judge Jock Zonfrillo.

No doubt anticipating the accusations that would follow, Jock stressed that his former employee would not receive any preferential treatment: "If anything, Laura will be at a disadvantage carrying the weight of cooking for her mentor," he told The Daily Telegraph.

But the accusations stuck nonetheless, to the point that when Jock described a pumpkin ravioli Laura cooked recently as a "yawn fest", critics cried 'conspiracy'.

"Jock was over-doing his criticism of Laura to make up for the favouritism he's shown her at the beginning of the series, so he's not seen as being bias [sic]," one person tweeted.

Oh, and speaking of conspiracies...

Poh has apparently only made it to this top eight stretch of the competition because it was in her contract.

The word "rigged" crops up a lot in her Twitter-mentions, along with accusations that the series has become "The Poh Show" (good title; would watch).

Others have claimed her high-risk, down-to-the-wire cooking strategy is "unnecessary drama" and "attention seeking", which would make Poh one Australia's best undiscovered acting talents.

Sure, the South Australian had some close calls (read: the jungle curry challenge), and yes, she's been heavily featured. But she's also one of the most versatile, instinctive and talented cooks in the competition; few others can flit from world-class pastry to Italian to Malaysian and beyond with such dexterity.

So what is it about these two women that's compelled viewers to erase all their success and apply their own reality-TV 'villain edit'?

Let's look at their similarities: female; high energy; confident; competitive, and not in the quietly determined way our culture tends to prefer of women.

This, despite repeated attempts by her fellow competitors — people who have actually lived and worked with her — publicly insisting she's generous, kind, thoughtful and more.

But even if we assume for a moment that they're wrong, and even if we assume that Poh is getting more attention than the other contestants, what about anything they've done warrants strangers to publicly tear them down and cheer at their failures?

Are we really that starved of representations of women who are self-assured, who take up space and who don't apologise for their own success?

We must be, because people are sounding really hangry right now.

Reply
Upvote
What a shame there has to be one winner. I think they have all been Master chefs. We all have off days and that’s all it takes on this show . They have also shown amazing self criticism of their own dishes. Takes a special person/ people to do that on national tv. Bet their worst dish is better than my best!! Congratulations to all of you👏
E
essie 2 years ago