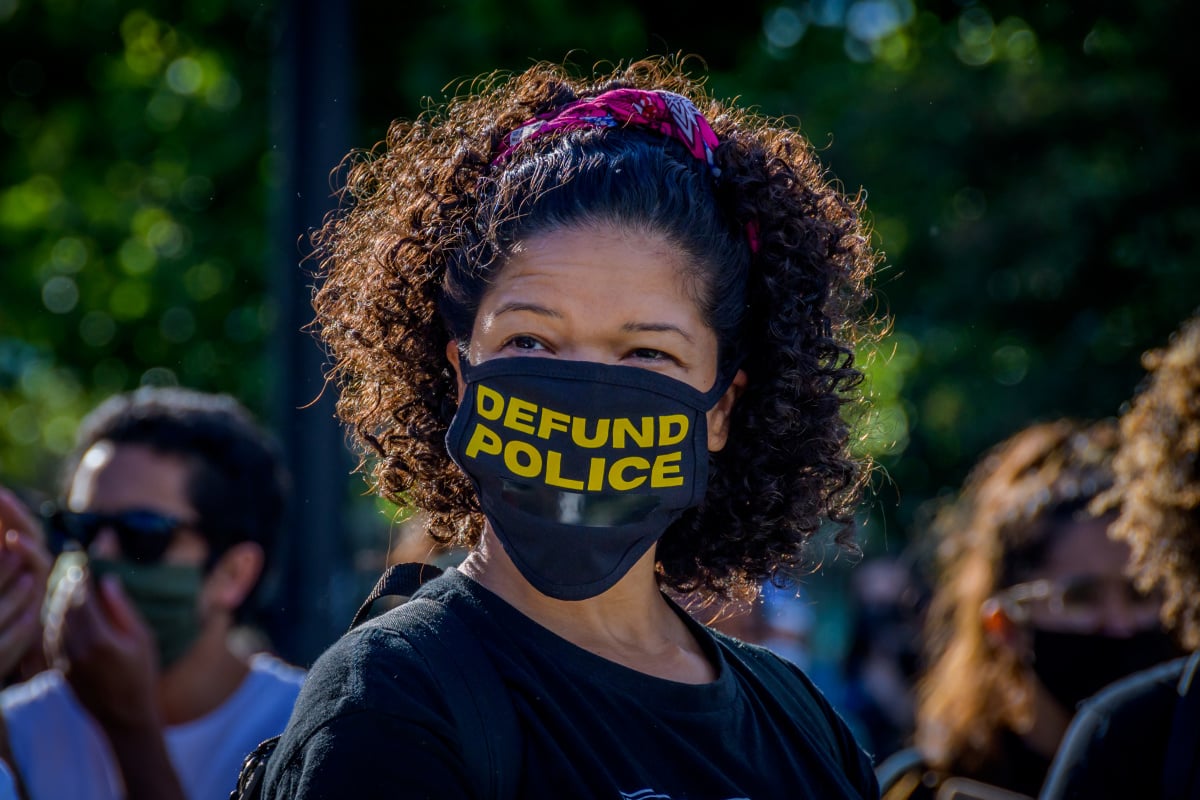 As protests across the United States, and around the world including in Australia, continue to demand justice for police brutality against black, Indigenous and people of colour (BIPOC), another chant has gained support from far and wide: Defund the police.

It's not a newly coined phrase. Activists and critics of law enforcement and the criminal justice system have been floating the idea for decades, but with the spotlight so heavily on systemic racism following the deaths of George Floyd, Breonna Taylor and too many other black Americans by police, it has gained huge support during protests and across social media.

But what exactly does defund the police mean? How would it work in practicality? Here's what you need to know.

What does 'defund the police' mean?

"Defund the police" means reallocating funds destined for police forces across the US into other public programs, acknowledging that crime prevention is more effective than the cure.

Supporters want a portion of the money spent on policing (AU$164 billion in 2017, according to Urban Institute data) redirected to other things, such as housing, education, social services and mental health support.

Defunding the police is not asking for all police funding to be eliminated.

"When we talk about defunding the police, what we're saying is 'invest in the resources that our communities need'," Black Lives Matter co-founder Alicia Garza explained on NBC's Meet the Press.

"Are we willing to live in fear that our lives will be taken by police officers who are literally using their power in the wrong way?" she asked.

"Or are we willing to adopt and absorb the fear of what it might mean to change our practices, which will ultimately lead to a better quality of life for everyone?"

“Why can’t we look at how it is that we reorganize our priorities so people don’t have to be in the streets during a national pandemic, a global pandemic.” pic.twitter.com/JUazC3is02

'Defund the police' goes further than previous calls to reform law enforcement, and argues past attempts such as police body cameras and training on implicit bias and use of force have not worked.

Defunding the police would not mean descending into chaos with no law and order.

"Defunding the police absolutely does not mean that we eliminate all cops and just succumb to the purge," host John Oliver explained on Sunday night's episode of Last Week Tonight.

"Instead, it's about moving away from a narrow conception of public safety that relies on policing and punishment, and investing in a community's actual safety net." 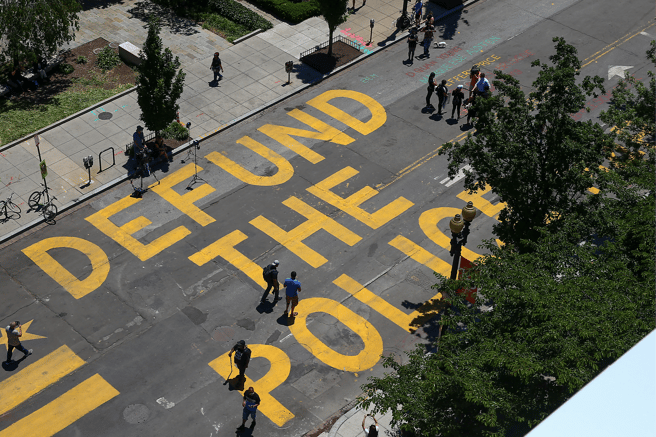 In Washington DC, "Defund The Police" was painted on the street near the White House. Image: Getty.

It is about putting funding into community-based models of safety, support and crime prevention, targeting education, healthcare, mental health, poverty and other social issues that advocates say police are poorly equipped to deal with, and lead to an increase in police intervention and crime.

For example, police are regularly dispatched to deal with people experiencing homelessness, leading them to be incarcerated at a very disproportionate rate, yet the root cause is not addressed.

There would still be police officers, but they would have a more focused job description.

"There are jobs that cops have that are really important, like detective work. It's good to find out who killed someone," the post said.

"But why should they be the same people who, say, stop people from drunk driving? Or perform welfare checks? Or interview rape victims? Or respond to domestic violence calls?"

The post said police should be "deconstructed and broken into different jobs, all requiring very specialised training."

In an op-ed for the New York Times, Philip V. McHarris and Thenjiwe McHarris argued policing can be changed so not everything is treated as a legal issue above all else.

"So if someone calls 911 to report a drug overdose, health care teams rush to the scene; the police wouldn't get involved," they wrote.

"If a person calls 911 to complain about people who are homeless, rapid response social workers would provide them with housing support and other resources. Conflict interrupters and restorative justice teams could mediate situations where no one's safety is being threatened."

Basically, as Oliver put it on Last Week Tonight, "the concept is that the role of the police can then significantly shrink because they are not responding to the homeless or to mental health calls or arresting children in schools or really any other situation where the best solution is not someone showing up with a gun."

In 2016, Dallas police chief David Brown said the responsibilities of police departments had become much broader than what the traditional scope of law enforcement should be.

"We are asking cops to do too much in this country," he said during a news conference after the fatal shooting of five Dallas police officers. "Every societal failure, we put it off on cops."

Has anywhere committed to defunding the police?

Yes. In Minneapolis, where George Floyd was killed in police custody, the city council pledged to dismantle the city's police department.

It pledged to instead invest in a community-based public safety model, but has not yet provided specific details.

"It is clear that our system of policing is not keeping our communities safe," said council president Lisa Bender.

"Our efforts at incremental reform have failed, period." 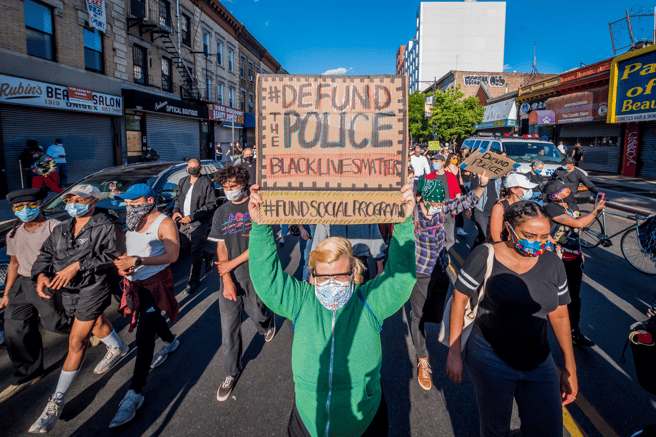 New York City Mayor Bill de Blasio said the city would shift funding from the NYPD to social services and youth initiatives and in Los Angeles, Mayor Eric Garcetti vowed to cut as much as AU$214 million that was part of a planned increase in the police department's budget.

The initiative has already happened in some parts of the country: In Eugene, Oregon a program called CAHOOTS (Crisis Assistance Helping Out on the Streets) responds to up to 17 per cent of 911 calls that come through to the city's police department.

If 911 receives a mental health-related call, CAHOOTS attends the scene instead of a police officer. Each team consists of a medic and a crisis worker who are trained to deescalate situations and help people into the next steps of treatment.

"There's an opportunity to really talk about how cities can provide a compassionate response and really look at what types of situations actually need a uniformed, armed officer to respond, and what types of situations could be resolved by a different type of presence, a different type of response," CAHOOTS operation coordinator Tim Black told KLCC. 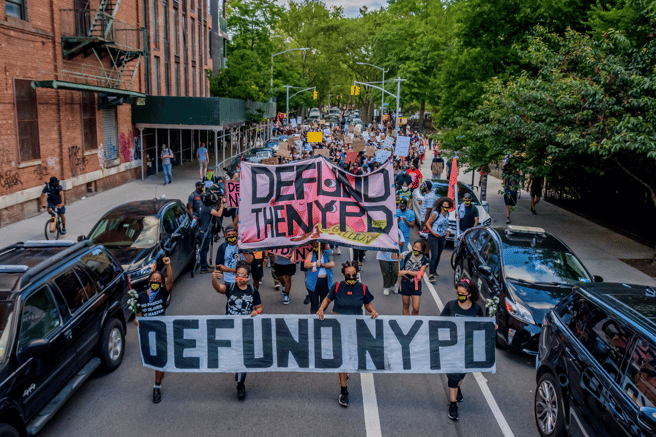 What do critics say?

US President Donald Trump is strongly against the idea.

"We won't be ending our police force in a city. I guess you might have some cities who want to try but it's going to be very, a very sad situation if they did, because people aren't going to be protected."

Trump has little to no authority over most police in the US, as state and local governments control their own departments.

Presumptive Democratic nominee Joe Biden has also said he does not support defunding police in an interview with CBS.

His campaign said he backed the call for increased spending on social programs separate from policing budgets, but he also wanted funding to continue for police reforms such as training on community policing approaches, CNN reported.

The key argument critics of defund the police movement have made is that it will lead to increased crime.

The Los Angeles Police Protective League, the union for the city's officers, said budget cuts would be the "quickest way to make our neighbourhoods more dangerous."

Could this work in Australia? 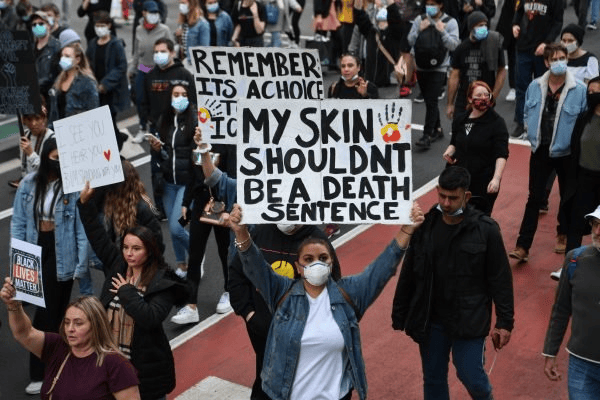 "At the moment people think the police there are serving a certain section of the community and not serving everyone."

Across Australia, Aboriginal patrols already exist. These are typically self-funded and independent from police, and aim to keep people safe, minimise anti-social behaviour and divert them away from contact with the formal criminal justice system into alternative community owned networks of care and support.

Reply
Upvote
1 upvotes
It's an interesting idea, I think initially I'd like to see both - more funding for the social services side of things, as well as more training for police, especially in things like de-escalation.
S
snorks 2 years ago