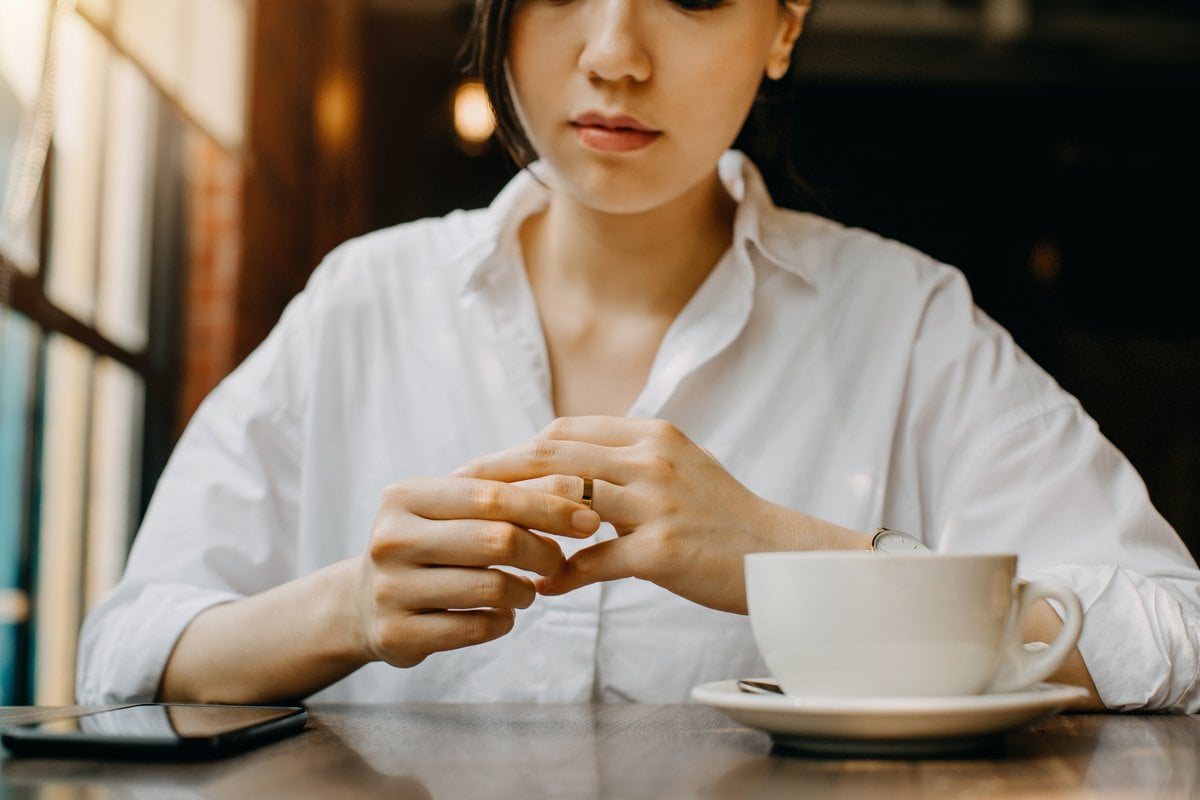 Once upon a time, in another life, I had a vision for my marriage.

I would tell Joseph how I imagined our life in our old age. We’d have a house with a porch and we’d sit together in our rocking chairs in the evening.

Giving up something that doesn’t exist has been harder than giving up the spouse that does exist. The emotional investment makes me feel naïve. Was there ever a chance that when we retired, we’d still like each other?

My resentment and bitterness from a lifetime of our bad marriage would have killed my desire to spend evenings with him.

Watch: How I knew my relationship was over. Post continues below.

I blamed myself during the marriage. Not in an, "Oh goodness, if only I were a better wife" kind of way. More like, "If only I were stronger and could suck it up better". It was my fault I was hurt and angry because I shouldn’t have felt that way in the first place.

In so many ways I thought I had broken the cycle of my upbringing when I simply modernised it. I still internalised the rage and pain after the other person had long since moved past it.

The feeling like I didn’t have a right to ever be angry and definitely not to vocalise it.

As a kid, I needed parents who didn’t want me to be an emotionless, rule-following robot. As a wife, I needed someone open to hearing when I was upset; conversations where I brought up my hurt ended with me apologising after the tables turned on me.

In the final stretch of my marriage, I didn’t have the energy to fight anymore. I scheduled my crying time to skim the pain and anger from the surface before they boiled over (typically between 5pm and 6pm, while driving to get my children after work, Monday through Friday).

As a kid, I was conditioned to never speak of my household drama with friends. My parents' Jedi mind tricks worked so well that when I eventually told my childhood friends a fraction of my upbringing, they were floored at how well I had kept it hidden. I learned early how to keep family secrets while slapping on a smile.

As Joseph’s wife, I never told my friends any of our marital drama. It felt like a betrayal to speak of our problems. The pattern repeated itself once I told everyone about the divorce; they were shocked at how well I had kept up appearances when things were so bad. (I still have never told anyone the full extent of our bad marriage).

The problem with keeping secrets is that they become normalised. That’s dangerous. Not only does it allow someone to continue with unhealthy behaviours, but they also feel uncomfortable when they’re in safer environments.

When people press me for details on my marriage’s demise, I maintain my faux politician stance and repeat that he’s a great guy but we’re not a good fit. When pushed further by closer friends, I’ll let some things slip.

It blew my mind to see people’s reactions when I’d mention how Joseph constantly threatened divorce during arguments. Even packing up bags and leaving, only to return hours late. (Where you gonna go dude, we have a mortgage?)

Listen to The Split. Separation and divorce can be a lonely, isolating and confusing time. Mandy Nolan is here to give you the advice, confidence and company you need. Post continues below.

I assumed it was a petty blow from a grown child lacking emotional intelligence. I didn’t know that it actually can cause psychological harm. That was one small act of many that messed with my head.

I’m grieving a parallel universe where I had the marriage I envisioned.

The images I had of children jumping on our bed to wake us up on Saturday morning. The dinners where we ate meals together at an actual table. Instead, we slept in separate beds for almost a decade. And with Joseph insisting on taking a job far away, he was never there during dinner. Our dining table is a graveyard for faded paper scraps and glue.

Why am I distraught over an alternate universe’s past that never existed? How can I miss something that I never had?

I’m not questioning my divorce decision. This is the right path.

I’m mourning the death of the person whose self-esteem dropped each year. The person who felt like a shell of a human for over 40 years whose only purpose in life was to finish raising her kids and then die.

That homegirl needed to go, don’t get me wrong. But she’s all I ever knew. And I hurt for the years of agony she felt in her heart, convincing herself that she was a horrible person who didn’t deserve happiness.

I’m not that person now.

Now I can look forward to having dinners with my kids on a table that is meant for actual meals. I can have a house free of an adult man’s clutter and trash.

I can wear whatever I want without the worry of ridicule or comments. I won’t have to walk on eggshells or remember how to properly apologise. I won’t have to hear someone yell at me so forcefully, my own home no longer feels like a safe haven.

And when those things happen, I can finally stop grieving my dream of Joseph and I in our rocking chairs on our porch when we grow old.

﻿﻿This post was originally published on Medium, and has been republished with full permission.

Reply
Upvote
This applies to many other relationships/ areas of life. We dream/ envision the future and when things don't follow the plan or vision we grieve the loss as if it were real when in reality it was our image of how things are or the hope of how things will be.