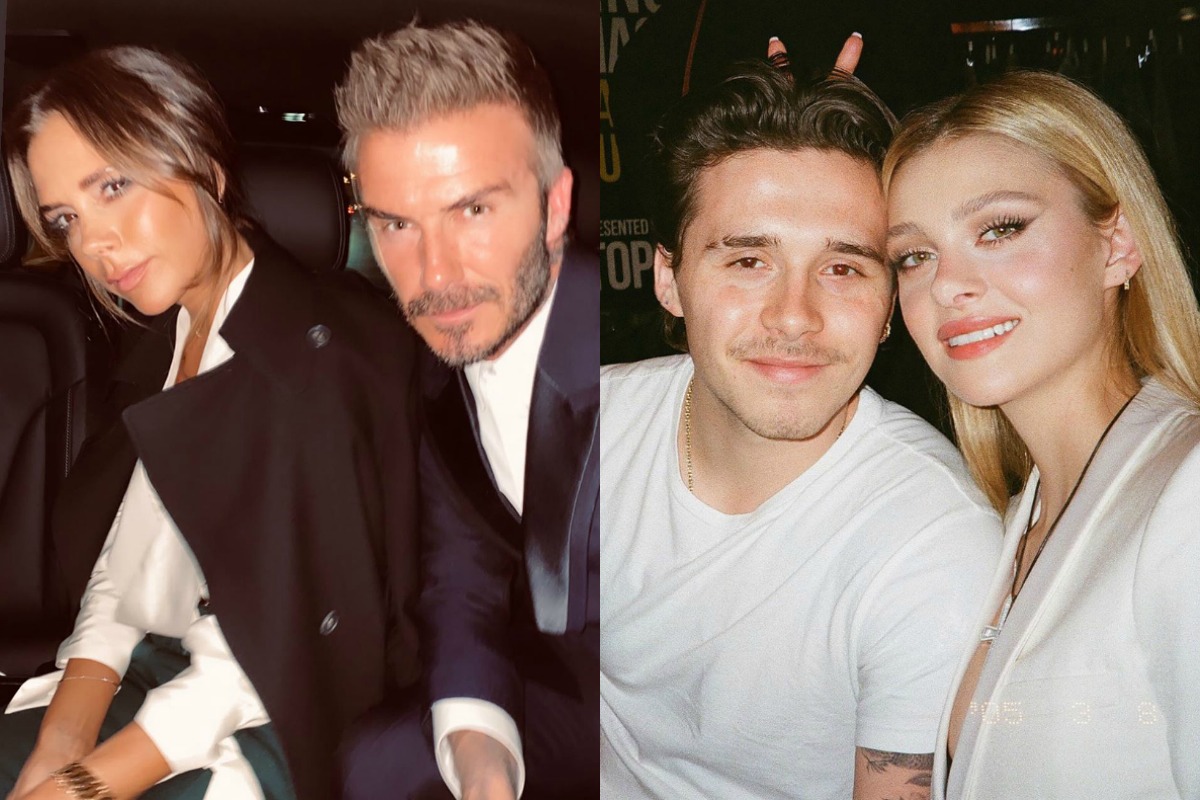 Victoria Beckham has opened up about how she and David Beckham have sustained a 22-year marriage.

Appearing on Good Morning America on Wednesday, the fashion designer was asked to share some marriage wisdom she would pass on to her kids.

She responded: "Oh my goodness. Marriage wisdom? You know, I don’t know. We’re very supportive of each other. He’s an incredible dad and a wonderful husband."

Video via The Late Late Show With James Cordon.

"And we have a lot of fun. We support each other with everything that we do. But it’s about having fun and enjoying that person’s company."

"I genuinely love being with him. Which is good, after all these years. It’s a bonus," she added while laughing.

Over the past 22 years, the couple have had their ups and downs and welcomed four children. Here's a look back at Victoria and David Beckham's relationship, and their family life.

In 1997, a Spice Girl and a footballer came together to become Britain’s most talked-about celebrity couple.

Prior to meeting, both David and Victoria had spoken to their friends about each other.

While Victoria had expressed hopes of meeting David during a Spice Girls football-themed photo shoot, David had watched a number of Spice Girls music videos, telling his teammates that he was attracted to Posh Spice.

Once the pair began officially dating, their relationship quickly became the focus of the British tabloids, as the media began bestowing the new couple with the now-famous moniker “Posh and Becks”.

Within a year of meeting, on January 25, 1998, the couple announced their engagement in a press conference, as Victoria showed off her diamond engagement ring worth $115,000. (In the years since, the fashion designer has received at least 14 engagement rings – including everything from diamonds and rubies to emeralds and sapphires – as gifts from her husband.)

After welcoming their first child, son Brooklyn, in March 1999, the couple went on to marry on July 4.

The couple’s wedding was opulent, to say the least.

The wedding, which was held at Luttrellstown Castle, near Dublin in Ireland, is believed to have cost more than £500,000, making it one of the most extravagant celebrity weddings up until that point.

For their big day, a total of 437 staff members were employed to work at their wedding reception.

The couple and their months-old son Brooklyn also went through a few costume changes.

To walk down the aisle, Victoria wore a custom-made Vera Wang strapless gown with a gold and diamond tiara, which was estimated to be worth between £18,000-£25,000.

For the reception, Victoria, David and Brooklyn changed into their party outfits, which were a suit and a fitted gown in a rich purple, adorned with flowers and designed by Antonio Berardi.

After the couple said their vows, a flag bearing the initials V. B. D. – standing for Victoria, Brooklyn, and David – was raised up above the castle in celebration, followed by the release of balloons and a full fireworks show. (Yep, we told you it was extravagant).

Although the media were largely kept away from the event, the couple posed on golden thrones in photos which were shared exclusively with OK! Magazine.

Despite the couple’s almost 21-year marriage standing as one of the most solid in Hollywood, divorce rumours have plagued the couple for years.

In the early 2000s, the couple faced rumours that David had an affair with his ex-assistant Rebecca Loos while he was playing for Real Madrid in Spain.

“I’m not going to lie. It was a really tough time,” Victoria said in 2007, reflecting on the scandal.

“David and I got through it together. No one said marriage is going to be easy.”

The footballer has since been accused of multiple affairs with other women, including a rumour in 2018 that he allegedly had an affair with his daughter’s school teacher.

Speaking to Lisa Wilkinson on the Sunday Project at the time, David shared that he’s learned to turn a blind eye to the incessant rumours about his marriage.

“Do you get sick of the tabloids?” Wilkinson asked.

“No, I’ve grown to kind of ignore some of the negative stuff that’s said,” David explained.

“I think if you know each other, if you know you’ve got great friends, great family behind you, the thing we have to do is protect our children.”

In the interview, the 46-year-old hinted that his marriage – like most – has not always been an easy ride.

“When you’ve been married for the amount of time that we have, it’s always hard work. It becomes a little more complicated,” he said.

“You know your children — they want your time and they deserve your time, and difficult situations like travelling away, being away from each other you know, you make it work.”

The couple welcomed their first child, Brooklyn, just a few months before they were due to be married, in March 1999.

Following their wedding, the couple welcomed their second son, Romeo, in September 2002, their third son, Cruz, in February 2005, and their daughter, Harper, in July 2011.

Speaking to Jimmy Kimmel about her children last year, Victoria joked that she has “so many” kids.

“It’s less about parenting and more about crowd control when it gets to that many,” she added.

“All four kids bring all their friends over to the house. When we come home at the end of the day, there’s always lots and lots of children.

“And I think the main focus is making sure that they all leave empty-handed and the art is still on the wall.”

In June 2020, Brooklyn and his girlfriend Nicola Peltz got engaged after eight months of dating.

"Two weeks ago I asked my soul mate to marry me and she said yes," the 22-year-old model and photographer wrote on Instagram announcing the news.

"I am the luckiest man in the world. I promise to be the best husband and the best daddy one day. I love you baby."

"You've made me the luckiest girl in the world," the 26-year-old wrote.

"I can't wait to spend the rest of my life by your side. Your love is the most precious gift. I love you so so much baby and thank you Harper for this pic."

In the photo, Nicola is seen wearing a yellow dress from Victoria Beckham's spring and summer 2020 collection.

"The MOST exciting news," Victoria commented on the photo.

"We could not be happier that @brooklynbeckham and @nicolaannepeltz are getting married! Wishing you so much love and a lifetime of happiness. We all love you both so much."

In recent years, Brooklyn has become involved in the fashion world, much like his mother.

The 22-year-old has modelled since 2014, appearing in covers for Vogue China, Miss Vogue, and Dazed Korea. The budding photographer has also shot a campaign for Burberry Brit.

In May, he celebrated his two year anniversary with his girlfriend, 18-year-old British model Mia Regan.

And despite being just 16, the couple’s third child, Cruz, has amassed more than 1.8 million followers on Instagram.

“You know, I think that we’re a really close family. And I think, you know, the children sometimes get judged, for things they might like or they might post and they don’t know, they’re children, you know, but people are watching everything that they do,” she said.

“I think that can be a little bit scary. But you know, it’s something relatively new for so many of us, so we’re all still learning.”

In recent years, Victoria has also opened up about her daughter Harper’s growing love of fashion.

“On one hand, she’s quite girly, but on the other hand she has three big brothers and likes to run around and play football,” she told Vogue in October 2018.

“She’s been able to run in Alaïa platforms since she was three,” she added.

“But only at home – she would never be allowed to leave the house in heels.”