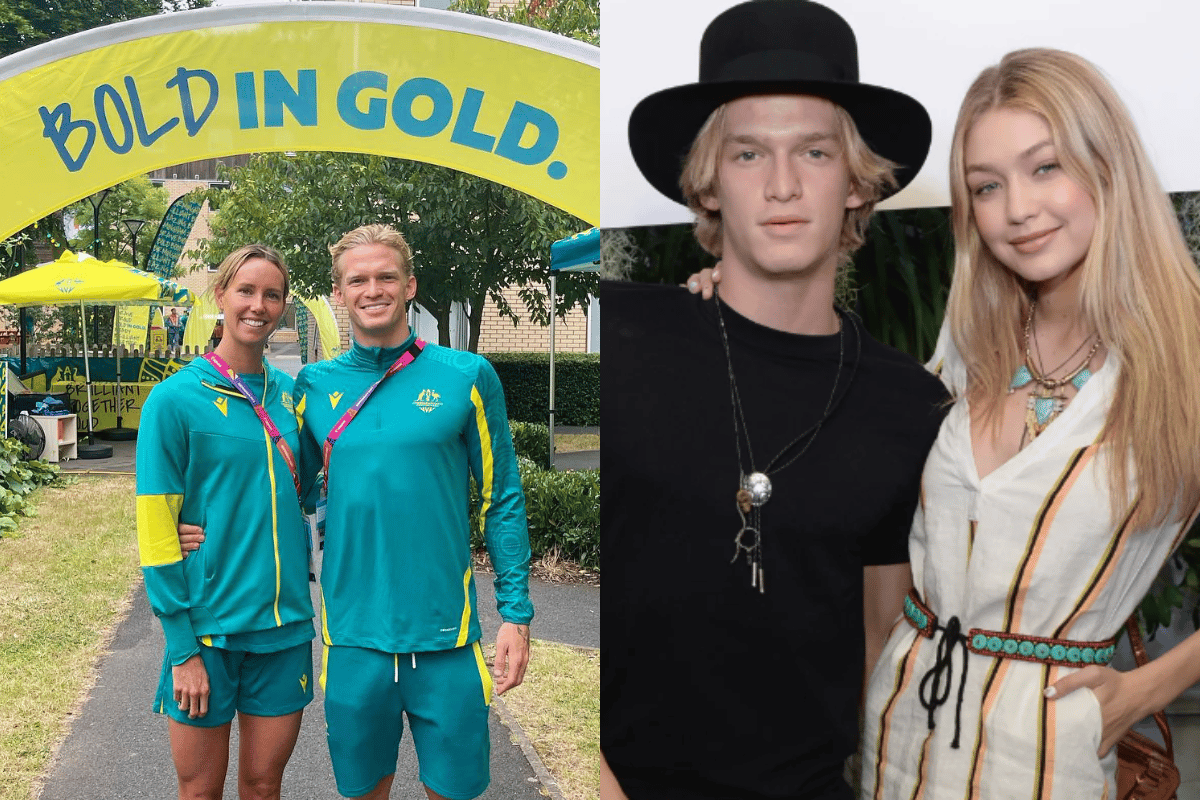 Cody Simpson has lived quite the life in the spotlight.

After a Grammy-nominated record producer in the US discovered his YouTube music videos, Simpson was fast-tracked to fame as a teenager.

But his dream wasn't to be a global pop star, perform on Broadway or act on television - all of which he's achieved.

And now the singer is doing exactly that.

The 25-year-old is currently competing in the 2022 Commonwealth Games in Birmingham, alongside his girlfriend and Olympic swimmer Emma McKeon, 28.

It's not the first time Simpson has dated someone in the public eye.

Over the years, he's been some pretty high-profile relationships, including a supermodel, a famous sibling, and a member of the Kardashian-Jenner family.

Here's everything we know about McKeon and Simpson's relationship and the singer's past dating history.

Simpson and McKeon were first linked together earlier this year in May.

The swimmers later went Instagram official when Simpson posted a photo of the pair in Barcelona in July.

"A brief rendezvous in Barcelona with my love," he captioned the post.

Speaking to 7NEWS Spotlight this week, Simpson explained he always knew McKeon was "special" but it took a year before anything came of their relationship.

"I always acknowledged that there was a connection that we had... But, we didn’t act on it until what ended up being a year later."

"But you know, I always saw her as this special person, to me. Like overall, pretty inspiring human."

The pair also have family ties, after Simpson’s parents swum with McKeon’s.

"This is the most authentically happy I’ve ever seen him in my life," Simpson's mum Angie told Spotlight.

"We’re loving where we’re at, at the moment," McKeon said.

"We talk every day about how happy we are and how lucky we are," added Simpson.

But while things are going swimmingly for the pair behind the scenes, they recently made headlines over a rumoured love triangle involving McKeon's ex-boyfriend, Kyle Chalmers, who is also competing at the Commonwealth Games this year.

Rumours started swirling after Chalmers back flipped on his decision to compete in the 100m butterfly at the world championships, ending Simpson's hopes of competing in the race.

At the time Simpson, who finished third in the 100m butterfly at the national swimming championships after Chalmers, was knocked out from being one of two athletes to represent Australia.

Speculation soon followed that Chalmers' decision had to do with a personal vendetta against Simpson, which Chalmers denied.

Simpson later told Amazon Prime Video the pair spoke about the situation and "cleared the air".

The 25-year-old also addressed "drama" involving his swimming team during his interview with Spotlight.

"There's obviously been a fair bit of drama, in the media and that around, all the team dynamic and, but no, there's been nothing but support around, me coming into the team, making the team," he said.

"I've been welcomed very warmly by, the current Australian team and all the swimmers on it and have been able to pretty much befriend and make friends, with everyone on the team and feel really welcomed by everyone."

By 2011, Simpson had relocated to Los Angeles for his music career. At the time, he was considered an 'Aussie Justin Bieber'.

Just this year, Simpson spoke to Nova FM's Fitzy and Wippa about the relationship, specifically about one of the dinner parties he attended with the Kardashian-Jenner family.

"My very first girlfriend was Kylie. And so at the time, Kanye was with Kim, you know. So I ended up going to a dinner in New York and sitting next to him. I was 15 at that time. I'm sitting next to Kanye at this dinner. You know, he's really nice," he said.

Simpson also said Kanye could be "quite intimidating when he's not smiling" but then "smiles really quick" in a way that's "very disarming".

"He was friendly as, and I was quite surprised at how normal it all was. But yeah, I mean, as a young kid, then it was nuts."

It's unknown when Simpson and Jenner split, but it's assumed to be in 2012. 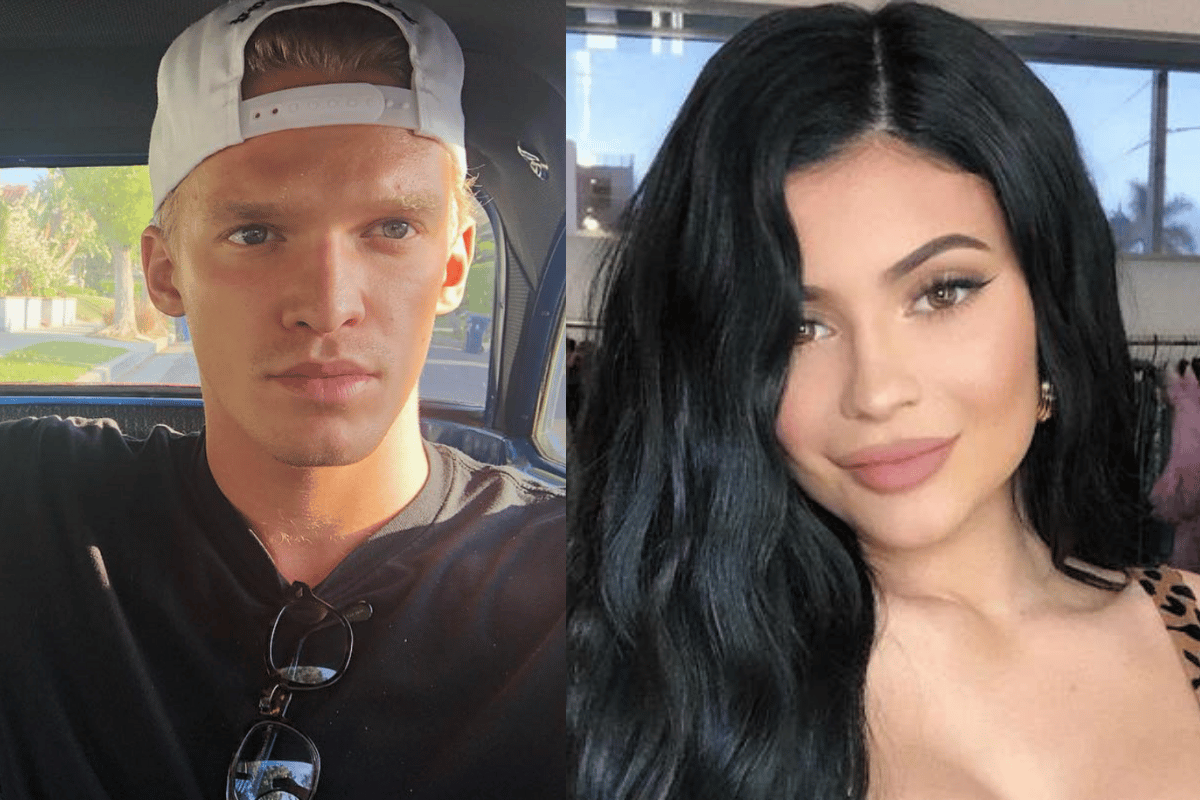 Reflecting on the relationship with the Sydney Morning Herald, Simpson said, "I dated Gigi Hadid for two years and have always enjoyed being with independent women who are strong individuals. I have never really been heartbroken in the deepest sense, but I have been disappointed in relationships."

In May 2015, they announced their breakup.

Soon after the breakup, Simpson did a sit-down profile with DuJour, saying the split was mutual. But he also said that it was the highly publicised nature of the relationship that became a point of contention.

"I love my ex-girlfriend. I always will. It was an amicable, mutual decision, and we still talk every now and then, but the highly publicised thing made me uncomfortable," he said.

"Going out to dinner and there being all this paparazzi and stuff... as soon as we split, I had the realisation that I was straying away from who I was as a whole person. I want to keep it low-key, and focus on my music." 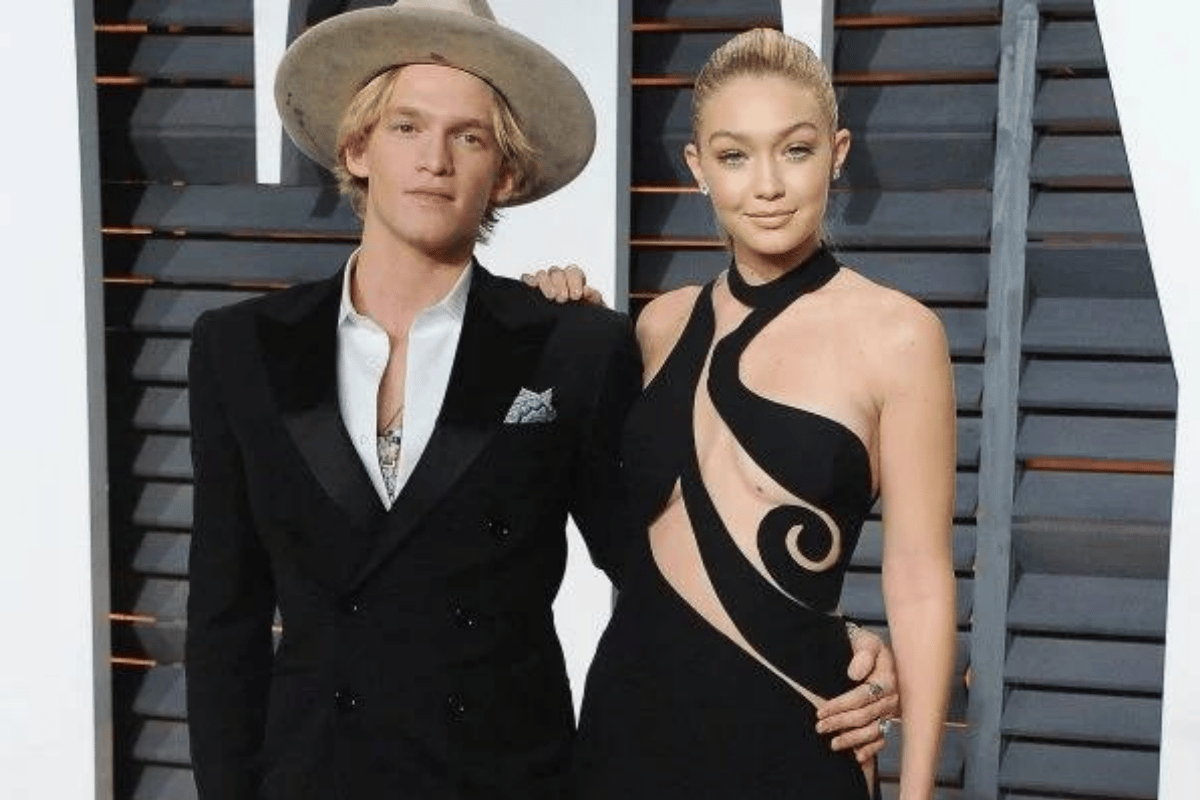 Does that name sound familiar? Well, Ali is the sister of the one and only Lindsay Lohan. In a radio interview in 2019, Simpson said it was a short romance.

"I dated Lindsay Lohan's sister for a little while and I lived in this little beach shack in Venice in California. And I didn't have a bed, just a mattress on the floor, by choice. I just didn't really care, you know. [Ali and Lindsay] came into the house and kept like, ordering me stuff and it would show up to the house. Lindsay bought me a bed frame."

Lindsay Lohan later confirmed this when she was 'reunited' with Simpson on the set of the Masked Singer Australia, where she was a judge and he won the show.

"I want my furniture back, because I bought your furniture for your house in Venice," she said after his unmasking.

Just to sink the boot in further, Lindsay then posted an old photo of Simpson and her sister Ali on Instagram with the caption, "When you realise you failed. And you settle for less @codysimpson. Family is everything. You won The Masked Singer, but you lost on your future." 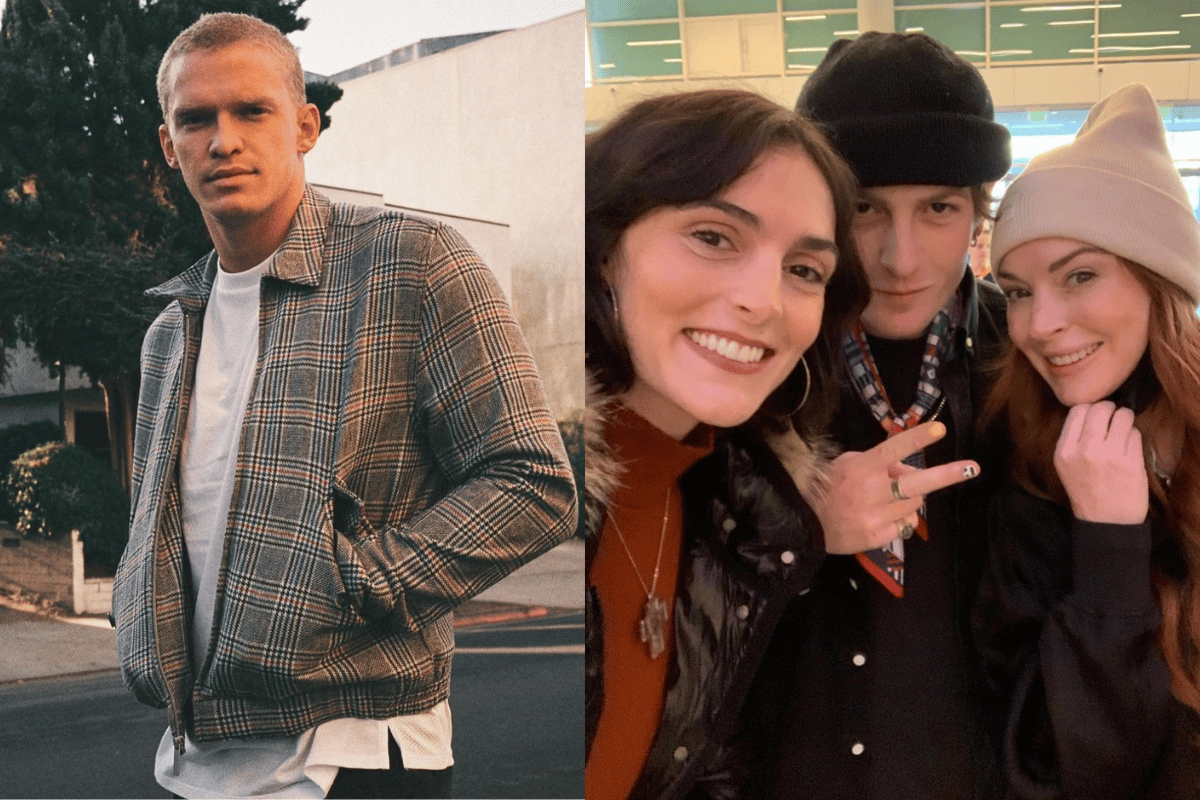 In October 2019, Simpson and Miley Cyrus confirmed their relationship after being friends for years prior.

"Miley is one of my best friends and she helps with some of that transitional stuff - trying to escape your childhood," Simpson told GQ Australia in 2015.

"She's super open-minded, and I'm working on becoming more like that."

During their relationship, the pair were incredibly loved up on Instagram, sharing plenty of selfies and TikToks together. 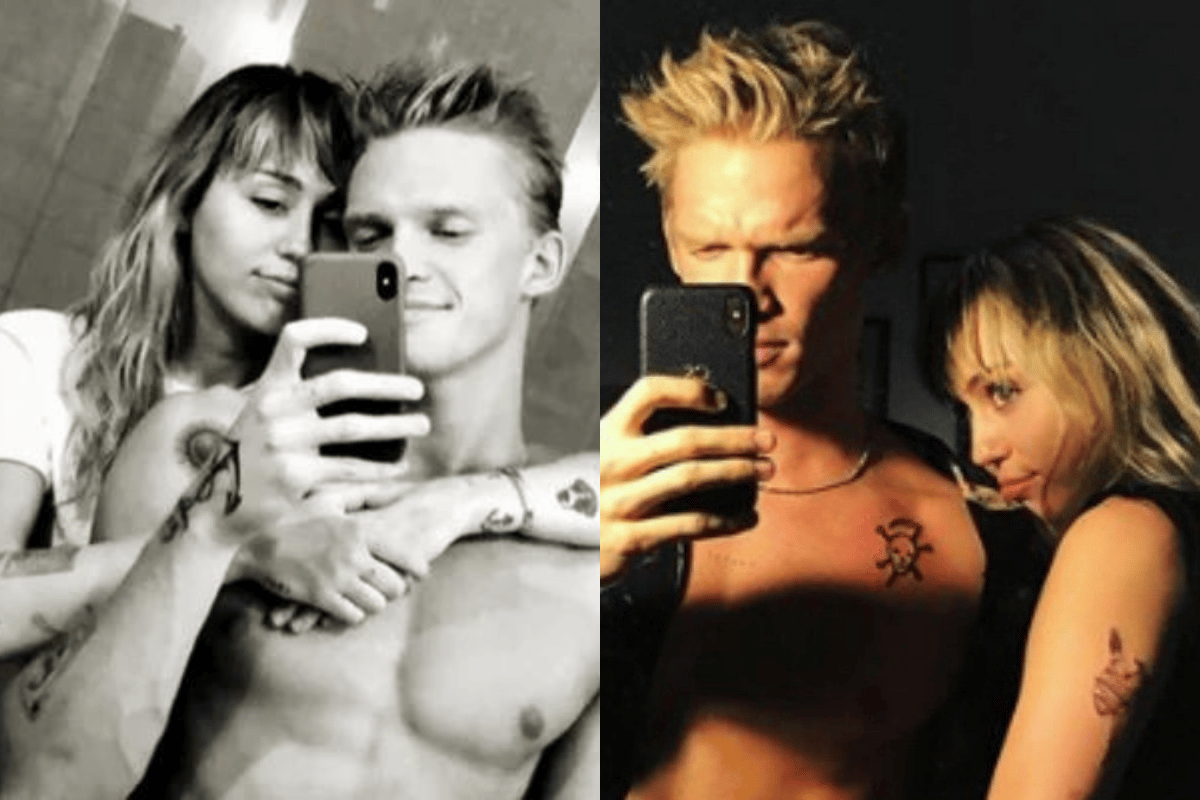 "And so don't make it some drama story if next week we're hanging out or getting pizza. We've been friends for 10 years and we're gonna continue to be friends. Just don't make it something that it is not. And with that being said, I'm done with the bullshit."

Simpson shared a similar sentiment on The Kyle and Jackie O Show, adding that their split came down to competing schedules and interests.

"It was kind of a mutual decision between us, knowing that we were going in different directions in our life," he said.

"I had just started training at that point. So, my life was changing, and I knew I was going to have to move back to Australia to do it properly and professionally and she was just going into her whole new album, and was gonna be going out on tour. It was a fork in the road kind of scenario, really."