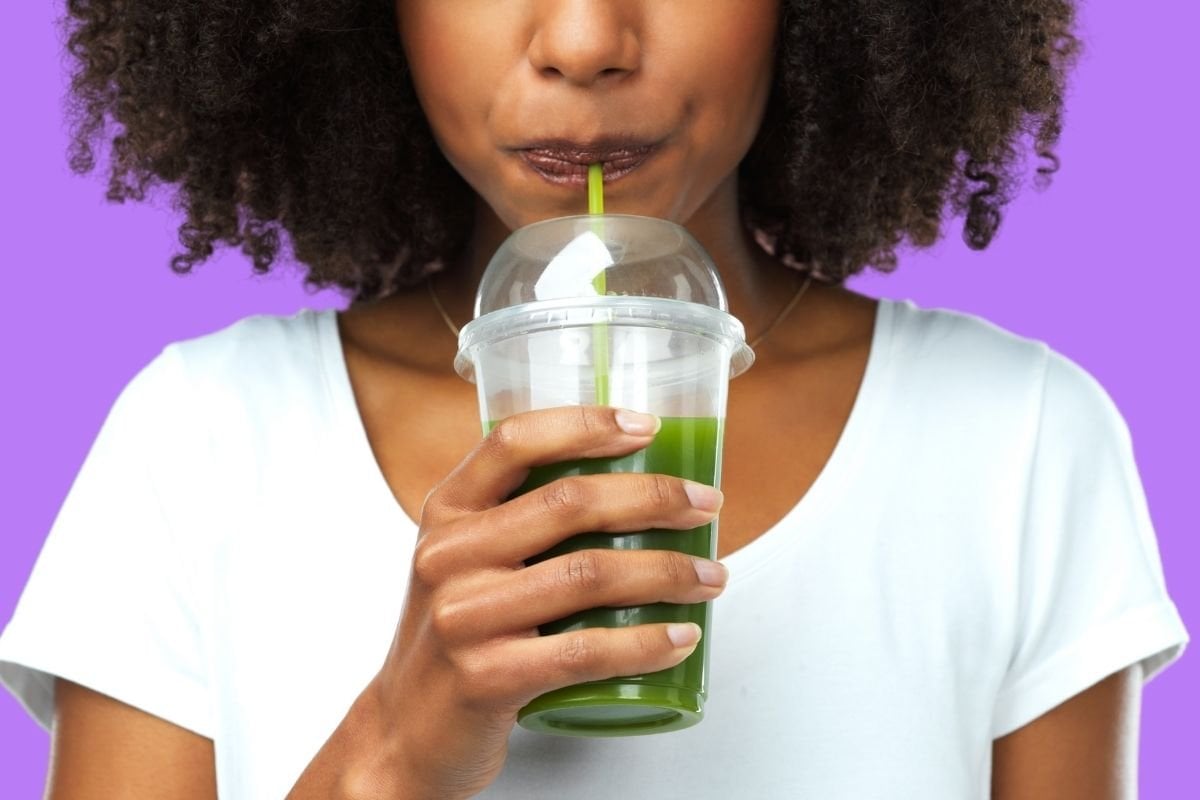 Yep, chlorophyll! Remember it from like, year eight biology? The stuff found in plants?? Well, people are mixing it into their water and downing it because it apparently has a heap of health benefits - including clearer skin.

Word on the TikTok streets is that chlorophyll can help with everything from acne to ageing skin, inflammation, and even wound healing.

Watch: Here are seven proven ways to improve your skin while sleeping. Post continues below.

In case you're not on TikTok with all the other cool cats, you can check out some of the hype below:

The wink was to distract you from the spill. Did it work? 🙄 #skincare101 #chlorophyll #acnehelp #hormonalacne #glowyskin #healthylifestyle #clearskin

♬ heavy in my mind - Jurk

Told you it was a thing! Over the past week or so, the hashtag #chlorophyll has had over 160 million hits. And the buzz has prompted many liquid and powder versions of the supplement to quickly sell out online. Pretty crazy.

But are the benefits actually... legit?

Well, let's just say there are a few things you should know about this whole chlorophyll trend before jumping on the bandwagon willy nilly.

To find out, we hit up a bunch of experts and asked them exactly what liquid chlorophyll can do for your skin.

Missed that science class because you were "sick"? Well, Dr Michele Squire from Qr8 MediSkin has got you.

So, pop on that fancy learning hat real quick.

"Simply put, it’s the pigment that makes plants green. Remember learning about photosynthesis back in high school (the process by which plants capture the sun’s light energy and convert it to a form that can be used by the plant for growth)? Well, chlorophyll is the compound in plants that captures the sunlight," explains Dr Squire.

"Chlorophyll has a chemical structure that is similar to haeme (the oxygen capturing part of haemoglobin, that colours our blood red), which is why it was called ‘plant blood’ during a previous fad. But it is neither plant blood (technically, that’s sap), nor can it substitute for the biological role of human blood."

So, in a nutshell it's the stuff that makes plants green and it helps deliver nutrients and all that good stuff.

Listen: Speaking of weird TikTok trends, can potatoes really cure acne? We find out on this episode of You Beauty. Post continues below.

"Um no, because chlorophyll is oil soluble so doesn’t dissolve in water," said Squire.

"What the TikTokkers are dropping into their water is a commercial food colouring product called Sodium Copper Chlorophyllin (let’s just call it chlorophyllin). It's a water-soluble derivative that is chemically extracted from chlorophyll."

An unfortunate turn of events, friend.

Squire explains that the differences in the chemical extraction process and which plant source was used (because different plants contain different types of chlorophyll) varies, meaning the resulting compound can be a mixture of components, meaning it's never really the same.

"This is just one reason why the tiny number of human studies investigating the health benefits of chlorophyll are difficult to interpret – they aren’t comparing apples with apples," said Squire.

"It’s also possible that something other than chlorophyll in these complex mixtures has health benefits (or, in the case of some studies, negative effects)."

Are there any benefits to drinking chlorophyll to improve your skin?

According to Squire, there just isn’t enough science behind chlorophyll to warrant the hype that's currently surrounding it - especially when it comes to skin and clearing acne.

"Both showed some acne improvement, which is promising but not even close to solid proof. And certainly nothing like the evidence supporting retinoids, the gold standard treatment for acne."

Cosmetic physician Dr Imaan Joshi had a similar view on the whole skin benefits thing, saying that there's limited research behind human studies to support all of these health claims, and that more evidence is needed.

"While there are some theories around the benefits in humans, the evidence for them is usually extrapolated from animal studies at present," said Dr Joshi.

"Most of these are still theories in humans. If chlorophyll is obtained via more plant-based food, yes in theory it may be linked to an improvement in acne (by consuming less junk/eating better), ageing (by eating less junk) and wound healing. Greens are high in vitamins and minerals - but studies are still lacking and the research we have right now just doesn’t show much," she adds.

Can chlorophyll have any other health benefits?

Well, it's possible - but again, there's not too much evidence to back it up.

"Chlorella is a green fresh-water algae that is rich in proteins, vitamins, and minerals," explains nutritionist and skin expert Fiona Tuck from Vita-sol.

"Seaweeds and algae have been shown to support gut health by acting as natural prebiotics and supporting the integrity of the tight junctions of the cells of the gut."

However, as mentioned before, liquid chlorophyll isn't exactly the same stuff as chlorella - it's a synthetic version that doesn't really produce the same kinds of benefits.

"Liquid chlorophyll is a more processed and cheaper form and is actually a semi synthetic form of chlorophyll called chlorophyllin, which may not be as nutrient rich as chlorella," said Tuck.

So, you're probably better off working in some nutrient rich-greens into your diet, instead.

"Supporting gut health and including nutrient-rich foods will help to support clear, glowing skin," said Tuck. "If you are looking to add chlorophyll to the diet, up the leafy greens or choose a more natural organic greens powder."

Are there any side effects of drinking chlorophyll?

Most experts say drinking chlorophyll is generally pretty safe, however you do need to be wary of what other medications or supplements you're taking.

"There are some suggestions that it may increase photosensitivity and interact with certain other medications that may predispose to increased photo sensitivity i.e. tendency to (sun)burn. Again, there is a lack of clear evidence," said Dr Joshi.

"If you're taking chlorophyll supplements, it may also stain your tongue and colour urine/faeces green. The safety of these supplements in pregnancy and breastfeeding is also unknown," she adds.

So, should I drink chlorophyll to improve my skin?

Look, if you enjoy incorporating it into your routine and it works for you, then great! Just have realistic expectations and know that it's not exactly going to 'cure' your acne.

"Acne is simply a medical condition that is relatively straightforward to treat medically. Don’t let TikTok (or anyone!) trivialise it and tell you that you’re not ‘healthy’ or you’re doing something wrong. Just see a doctor and get it sorted," said Dr Squire.

Eating a balanced diet with a variety of green vegetables and keeping your hydration levels up will probably score you more skin-loving benefits in the long run, anyway.

So, you don't necessarily need to drop a whole heap of money on fancy chlorophyll water. You'll get more bang for your buck with a bag of spinach, friend.

"Chlorophyllin is cheap, like $100/kg cheap," said Dr Squire. And given that you can have as little as 50mg in a serve (because it’s a food colourant, you will still get that TikTok-worthy bright green hue that we associate with good health), that’s 0.5c per serve. When you’re paying around $25 for a 50mL dropper bottle of supplement (100 serves), someone is making bank."

"If you want to spend your hard earned cash on a supplement with no proper science – have at it. You’re making some celebrity’s accountant jump for joy," said Squire.

Reply
Upvote
2 upvotes
Not me - another hyped up trend.