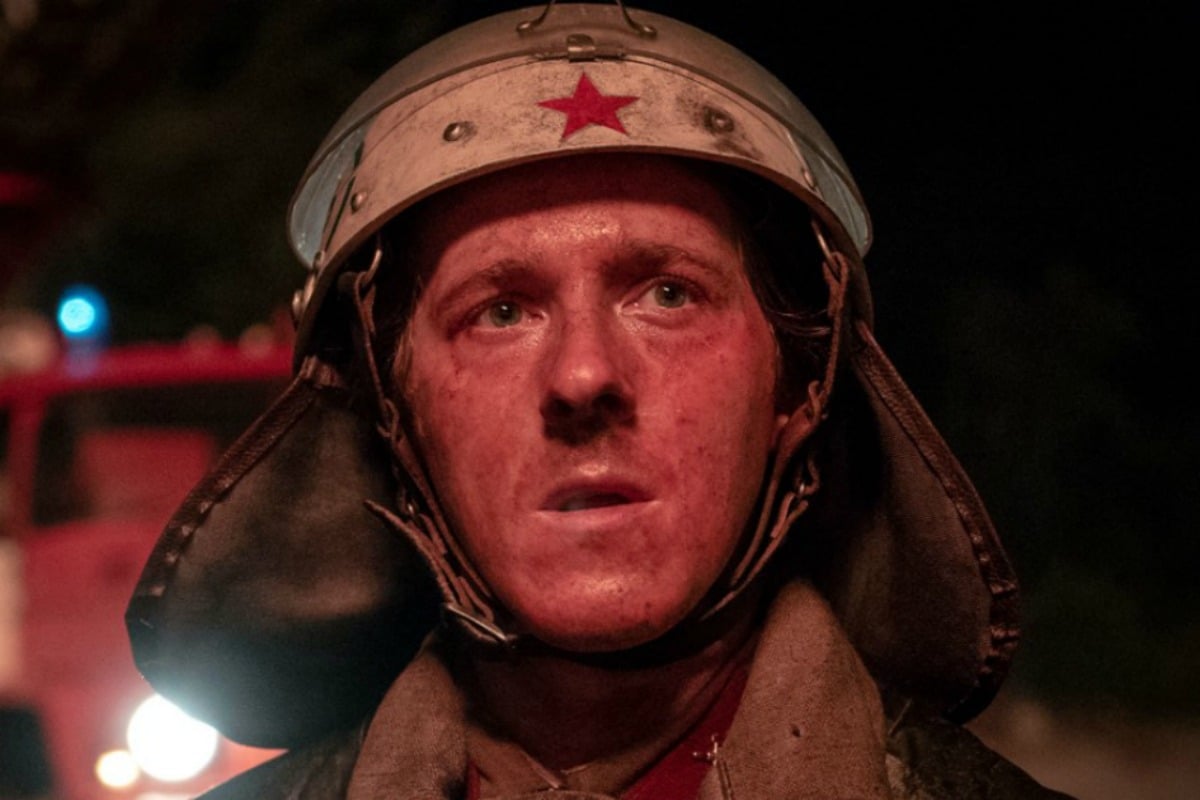 Since the release of HBO’s miniseries Chernobyl, there’s been a great deal of discussion about its historical accuracy.

We know that in the early hours of April 26, 1986, a safety test at the Chernobyl Nuclear Power Plant in Ukraine malfunctioned.

What followed was a series of explosions so powerful they equated to 500 nuclear bombs being projected into the atmosphere.

But what really happened to the men and women closest to it? Was radiation sickness as widespread as presented in the series? And does Acute Radiation Syndrome (ARS) really present as it did with Vasily Ignatenko, ending with his body virtually decomposing before his eyes?

Watch the trailer for HBO’s Chernobyl. Post continues below.

Were the firefighters and Chernobyl workers immediately sick as a result of the radiation?

Eyewitnesses recall dozens of people feeling sick within hours of the explosion, resulting in coughing fits, headaches and vomiting.

Firemen reported the air “tasting like metal” and a feeling of pins and needles on their faces.

Vasily Ignatenko, the fireman who dies in the series leaving behind his pregnant wife, was based on a real man by the same name.

According to his wife Lyudmila, who was at his side while he died, Ignatenko excreted blood and mucus stools more than 25 times a day, before eventually coughing up pieces of his own internal organs.

She also recalls his skin cracking and boils all over his body. "When he turned his head," she told Svetlana Alexievich, the author of Voice of Chernobyl: The Oral History of A Nuclear Disaster, "there’d be a clump of hair left on the pillow."

He was one of 27 firefighters who died of ARS in the three weeks after the Chernobyl disaster.

Head of makeup and prosthetics, Daniel Parker, has been widely praised for his accurate depictions of Chernobyl radiation burns in the miniseries.

Rather than look at photographs of Hiroshima or Nagasaki victims, which Parker figured were likely used as wartime propaganda, he instead sifted through medical textbooks, reading comprehensive physical descriptions of radiation sickness.

He insisted that these victims were not to be reduced to "Hollywood zombies". Parker knew, however, that when someone is subjected to radiation poisoning they "melt". He describes it as, "putting salt on a slug. Tissue is breaking down. Skin just slips off. It'll just go. One day you move your arm and the skin will just fall off."

Australian archaeologist and Chernobyl and radioactivity specialist, Robert Maxwell, tells Mamamia, "The skin of the tongue sloughs off, the skin of the body turns black and peels way upon touch... Eyes blister. The colon is covered in third degree burns.

"Their depiction of ARS and its treatment during the Soviet 1980s is highly accurate."

Furthermore, Oleksiy Breus, one of the men who entered the Chernobyl nuclear power plant just hours after the disaster, says Chernobyl's depictions are accurate.

Breus recalls seeing the shift leader and the operator on duty during that time, and remembers, "they were not looking good, to put it mildly. It was clear they felt sick. They were very pale. [Operator Leonid Toptunov] had literally turned white."

Within two weeks, they were both dead.

He saw other colleagues that night whose skin turned bright red. They later died in a hospital in Moscow.

How did people die of radiation sickness?

Parker says of ARS, "It's the worst way to die. Beyond anything you can imagine. The most horrible way to die. I think it’s the worst, in line with medieval torture."

Patients were denied pain relief, because it becomes impossible to inject morphine. "The walls of the veins are breaking down," Parker says.

In terms of how victims actually died, Maxwell explains, "death was a result of cell damage, internal bleeding and/or drowning in your own secretions follows, though not fast enough for those affected."

One man, Aleksandr Akimov, the Shift Leader for Reactor 4 on the night of the accident suffered burns to 100 per cent of his body. Maxwell explains, "that includes his internal organs. Akimov received fatal, three-dimensional burns to his entire system. He and his colleagues who died from ARS suffered a prolonged and agonising death as the very chromosomes of their bodies were destroyed and organ failure escalated."

ADVERTISEMENT
The bones of your body, he says, "decompose as you become a seeping, foul smelling soup of human material".

"Imagine scores of people slowly being microwaved to death over the period of weeks and that is a good indication of the effects of ARS," he adds.

"These people all died horrible, grisly, preventable deaths, and their passing is by no means overplayed by HBO."

Did bodies really have to be buried under concrete?

Ignatenko was buried in Moscow under concrete and zinc, because his body was still understood to be radioactive.

His wife Lyudmila remembers that even after he died, "They couldn't get shoes on him because his feet had swelled up. They had to cut up the formal wear, too, because they couldn't get it on him, there wasn't a whole body to put it on."

Did the Chernobyl divers die of radiation sickness?

Despite the warning that the "suicide squad" would die within a week of entering the Chernobyl nuclear power plant, two of the three are still alive.

While the shift leader Borys Baranox died in 2005, Valery Bespalov and Oleksiy Ananenko are still alive, residing in Kiev.

How many people died of radiation poisoning following Chernobyl?

Researchers are divided on how fatal the Chernobyl disaster ultimately was.

Propaganda from the time - the Soviet Union trying to downplay the explosion, and the United States trying to exaggerate it - has made the figures near impossible to determine.

In 2005, the World Health Organisation estimated the number of deaths potentially resulting from the accident could reach up to 4000 people.

As of 2005 less than 50 deaths had been directly attributed to the disaster. It is believed that 28 were a result of ARS.

A journalist named Kate Willsher, however, who visited Chernobyl during the late 1980s tells a very different story.

Willsher says doctors saw a spike in cancers and leukemias, with many babies born with rare deformities. Many children, she recalls, had "unexplained sickness" and quietly died in the years after. Willsher says there was no data kept for these victims, and therefore decades later, it is difficult to prove anything.

The non-government organisation the Chernobyl Union of Ukraine, estimated the death toll to be 734,000, with most due to related cancers.

Radiation scientists Ian Fairlie and David Summer estimated the final death count resulting from the explosion would likely fall between 30,000 and 60,000 people.

For accounts of death from radiation poisoning, one needn't go so far back in history as to the Chernobyl accounts. Alexander Litvinenko, anyone?