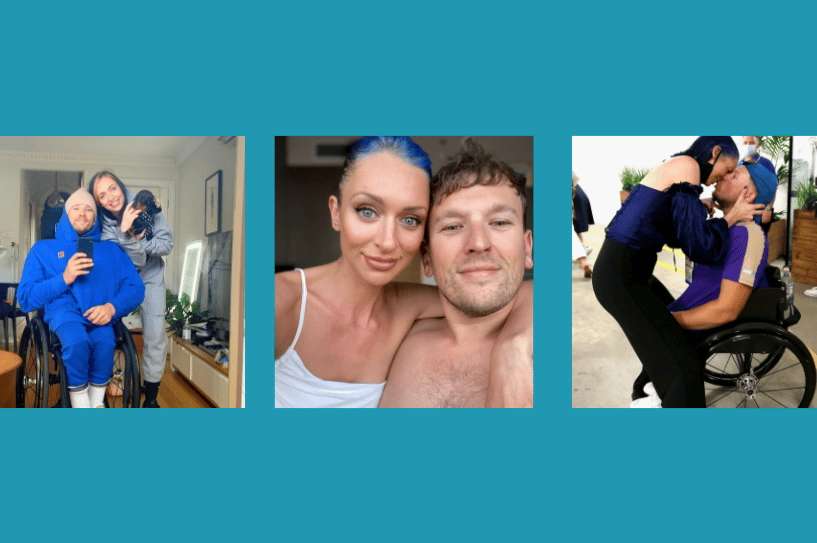 Dating when you're a sexologist is tricky.

There's pressure, expectations, and assumptions, as well as a whole lot of opinions about how your sex life should be a public discussion. Of course, that all cranks up a level when a sexologist starts dating a celebrity.

Quick! Watch this video to see the juiciest results from the Mamamia sex survey. Post continues after video.

And that's exactly what happened to Chantelle Otten when she fell in love with Paralympic champion Dylan Alcott.

Chantelle openly told her love story to Mia Freedman on No Filter - starting from the moment they first locked eyes to tackling their relationship during a pandemic.

You can listen to the episode right here in full. Post continues after podcast.

Here's what Chantelle had to say, and exactly what we learnt.

"I met Dylan at his book signing, and I had no idea who he was," shares Chantelle.

Why would she be attending a book signing of someone she didn't know? Well, it was the classic tale of being dragged along as a friend's plus one to an event. And frankly, it was the last place she wanted to be.

"I was with my friend just over two years ago. And that night I was dealing with PMS, my hair was slicked back, I was wearing an old t-shirt and sneakers. I think it was just, you know, one of those days where you're just like, I am mopey as. And I was so looking forward to going to dinner, but we had to go to this book signing."

But when she arrived - even in her mopey state - everything changed.

"I looked across the room, and I saw him and I just went: 'Ah, that's my person'. That's the person I'm going to be with for the rest of my life."

For the romantic cynics in the back that are unsure of this whole 'love at first sight' marlarkey, Chantelle described how that moment felt, sensation by sensation.

"I really felt this wave come over my body. And he was just so beautiful to look at and the way that he spoke. And I think that I just recognised that what he was doing was so similar to what I was doing. I really felt like I had met my match at that point."

Who made the first move?

Despite Chantelle being an expert in sexual communication, she admits that during that first night her shyness got the better of her, and she didn't utter a single word to Dylan.

"This was a kind of connection that I knew would work out. But I was just very silent at the back of the room. I didn't speak. I didn't ask a question."

"I just stared at him. In a creepy way."

"I put up on my Instagram a post about the talks and about sex and disability. And then he sent me a message and said, 'I saw you down the back of the room. Where did you go?' And I was like, 'I'm shy', and so he said, 'Oh, come talk to me next time'. Which was when I said, 'Well, why don't we go get a drink?'"

And get a drink they did. Well, it may be more factually accurate to say that they had multiple drinks and multiple meals because their first date lasted 12 hours.

...and there was a weird moment mid-date where she discovered that they have probably met before. When they were *checks notes* ... babies?

"He was talking about disability and the way that he is really changing the conversation around it. He spoke about sex in that conversation. He spoke about kicking goals. And I was just like, 'I wonder how old this guy is?' Turns out, we're nine days apart. We were both born in the same hospital. And he was there when I was born. So, I feel like we could have dated maybe 30 years ago!"

After their first date, Chantelle went back to Holland (where she and her family are originally from) for a couple of months - sort of putting a spanner in the works and delaying their love story.

"When I got back from that trip, he'd missed me so much. And we weren't even together. We'd spoken like twice. And I moved into his house a week later."

These two don't mess around.

The first time Chantelle Otten and Dylan Alcott had sex.

A bold topic, we know. But when you put a professional sexologist and a seasoned candid interviewer in a podcast studio together, these topics just sort of pop up.

"What was more nerve-racking: that first night when you were on your date or the first night that you had sex?" Mia asked. "Because having sex with a sexologist would be intimidating, right?"

"I think we were both pretty nervous to be honest. But we had a lot of practice and it worked out well," explained Chantelle.

Chantelle Otten on dating someone with a disability.

If you've gotten this far into this article and haven't quite established who Dylan Alcott is, firstly, we're concerned you may have been hiding under a rock, and secondly, he's Australia's greatest wheelchair tennis player.

Dylan was born with a tumour wrapped around his spinal cord which was operated on during the first few weeks of his life. The tumour was successfully cut out; however, it left Dylan a paraplegic, requiring him to use a wheelchair.

Being the brilliantly talented and motivated guy that he is, Dylan didn't let his disability stop him from achieving BIG. He won his first gold medal at the Paralympics for basketball when he was 17 years old, and he won many more gold medals and grand slams in tennis, too.

Chantelle, despite not knowing who Dylan was when they first met, did know from her sexology work that relationships where one partner has a disability can be tricky to manage. Not because of the disability itself, but because of other people's perceptions.

"I've worked with some people with disabilities that have said that when they're out in public, people think that their partner is their carer - I also know that we have had to deal with that a few times."

"I've definitely had people come up to me and say, You're such a brave person, or you're so kind, or you're a saint. And I'm like, Are you kidding? He looks after me."

"We are so protective over each other and respectful," Chantelle says. "And I just think that people coming up and saying that to me while my beautiful boyfriend is sitting next to me in his chair. It just breaks my heart. All I want to do is just push them away. But you just have to be respectful and just say, 'just keep moving'."

Mia flags in the interview that "there's definitely a perception that people couldn't have sexual lives, because they're disabled," which both Mia and Chantelle agree is complete nonsense.

The conversation around sex and disability is one that Chantelle believes people should be having much more often, but she admits that it's something she's still learning about with Dylan.

"I think the best thing that I've learned from Dylan is to never assume. Because yes, I'm an expert in my field, but I've never really thought that I know everything. I can never know anything that is so personal to someone else. Instead, I see it as my job to figure it out, and to ask a lot of questions. And we deal with them in the exact same way, you know, asking, how does this work? How does that work? And you know, how do we figure this out?"

On love in lockdown.

Like a lot of couples, Chantelle and Dylan have had to tackle being a fairly new relationship in the throes of a global pandemic and months upon months of lockdowns.

But they had a clever strategy to get through: "We got a puppy."

In all seriousness, they say that little 'Sauce Alcott' is teaching them some big life lessons.

"We kinda learned how to be parents. And it's a lot of work!"

So, will Chantelle Otten and Dylan Alcott be having kids?

In short, it's definitely something that's on their minds. But it's been a bit of a game of timing.

Plus, Chantelle, after working with many mothers, has concerns.

"I'm just worried that my sex life will go out the window. Like once I cried thinking about it, saying, 'I don't think we're gonna have sex anymore'. After that Dylan was like, 'Oh, my God'."

Luckily, for now that's certainly not a problem for Chantelle and Dylan as the two continue to go from strength to strength, candidly sharing their rather beautiful love story.