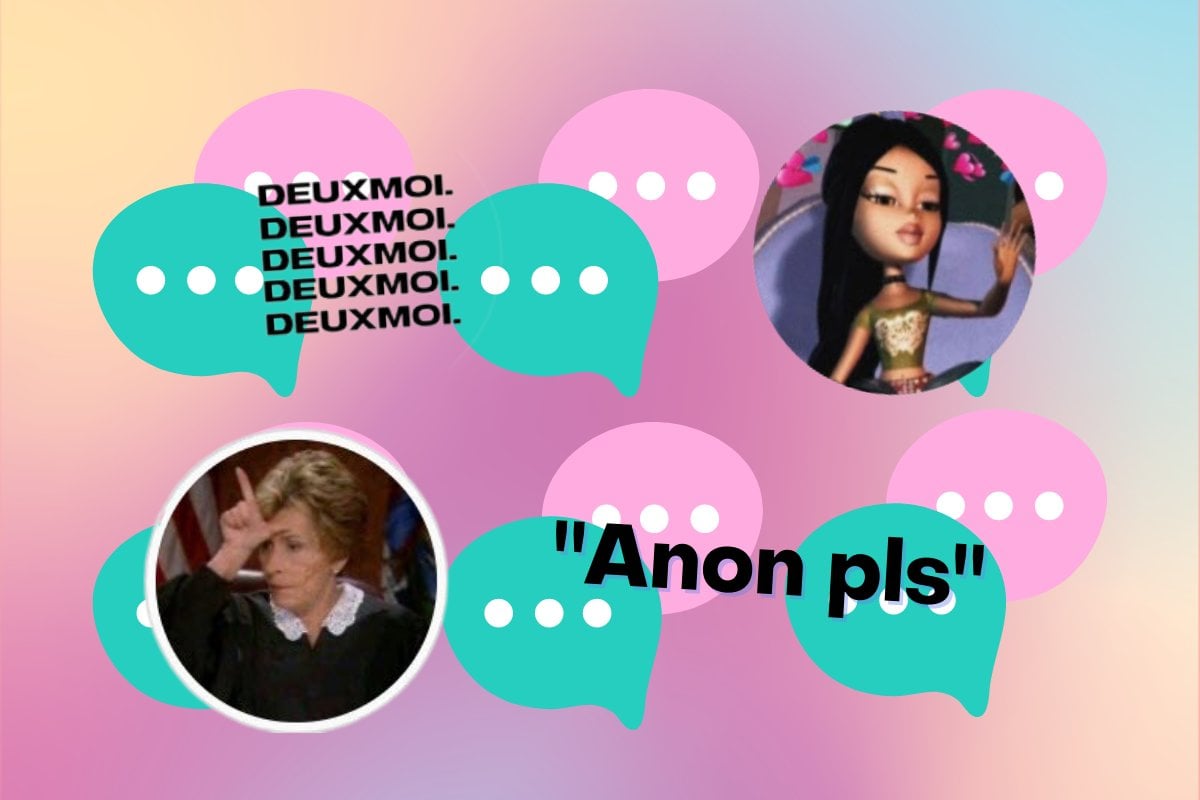 'Blind' Instagram gossip pages are having a real moment.

If you haven't come across one, it's really as simple as it sounds: An Instagram page which shares 'blind' celebrity gossip, sightings and posts from industry 'insiders', who leak details on upcoming films/TV shows/music releases etc.

In most cases, the identities of those behind the account are secret, adding to the mystery, and the cryptic clues offering hints of who each post is about make you feel like you're Nancy Drew.

Watch: Remember the actual celebrity-endorsed content from early in the pandemic? That was... really something. Post continues below video.

Globally, Deuxmoi is deuxing the most. With more than 800,000 followers, it shares mostly blind items and spottings of celebrities - from the most A-list of stars to Real Housewives.

The account boomed thanks to the strange circumstances of the pandemic. Traditional gossip sites lacked content; there were no celebrities out and about to pap, no events or red carpets to talk about.

Prior to COVID, Deuxmoi was a lifestyle and meme account that occasionally reposted gossip from other sites. Early in the pandemic, it asked followers to share their best, worst and most bizarre celebrity encounters, which set the wheels in motion. It's now a full-blown phenomenon.

It's not just followed by the plebs who want to the be in the know (*raises hand*), but other celebs and 'real media' too, like The Hollywood Reporter and the Hadid sisters.

Its content has made real headlines too: It was anonymous tips to Deuxmoi that lead to last year's increased speculation about James Corden being not-that-nice, and the account was recently targeted by Armie Hammer's camp in a Vanity Fair article about the sexual abuse allegations against him.

Deuxmoi was very unhappy about this and felt like Hammer's team was unfairly tarnishing the account, which posted screenshots about him in January, after the information was available elsewhere on the internet. This made further headlines. 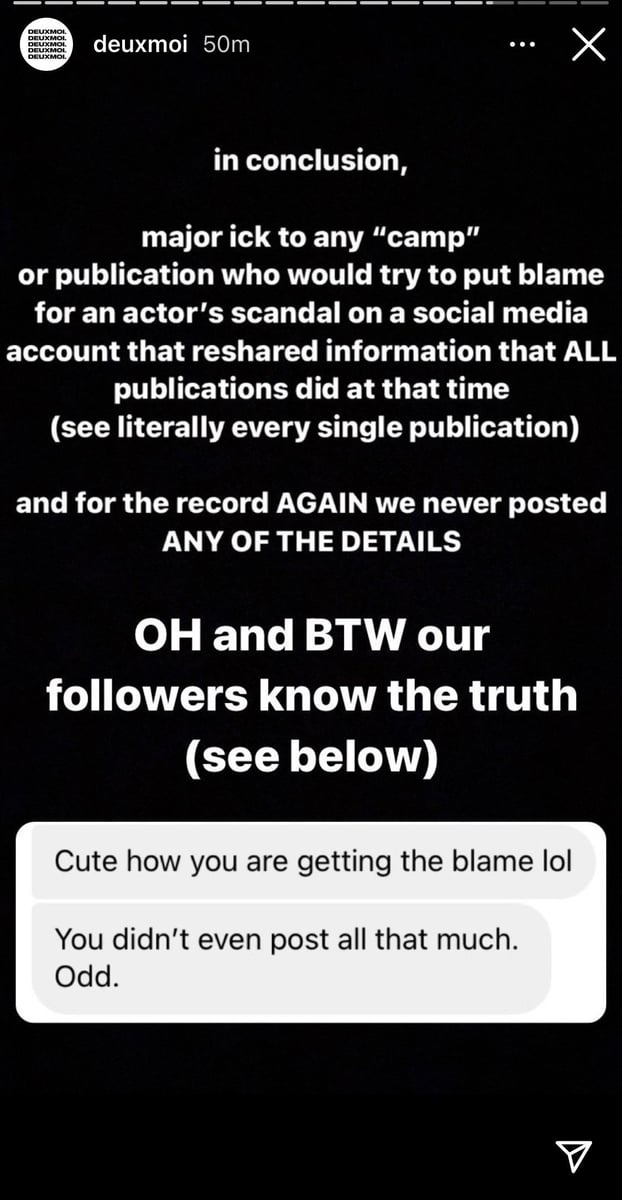 Of course, nothing on Deuxmoi is verified, but the account has built up a reputation for getting very accurate tips. Loyal followers will have known about Kourtney Kardashian and Travis Barker's relationship for a couple of months before it was made public, and there's been several pregnancy hints that have turned out to be legit.

Right now, it's got me very excited for an upcoming Lorde comeback.

For an entire year, people have watched through dozens of slides of goss each day. It's shared everything from Ben Affleck and Ana De Armas' breakup and details from extras on the sets of upcoming films.

Industry insiders have shared details on new reality TV shows, who's causing drama on film sets and Taylor Swift's album re-records (supposedly coming thick and fast all year, I've never been so excited in my life).

But it's not just the Americans enjoying the gossip train. Closer to home, a few different accounts tackle different parts of the Australian celebrity and influencer landscape.

There's Celeb Spellcheck, which began as an account which shared funny influencer/celebrity grammar and spelling mistakes and has morphed into anonymous gossip and holding influencers accountable for a bunch of problematic sh*t.

Celeb Spellcheck has grown incredibly fast, from about 55k at the beginning of January, to 150k at the end of March.

The account itself has made headlines because of the mystery surrounding who runs it (just a normal gal from Melbourne, so she says) and for nuking its posts and taking a break recently.

The break was celebrated among many in influencer circles, including Bachie franchise legend Keira Maquire and Sophia Cachia. 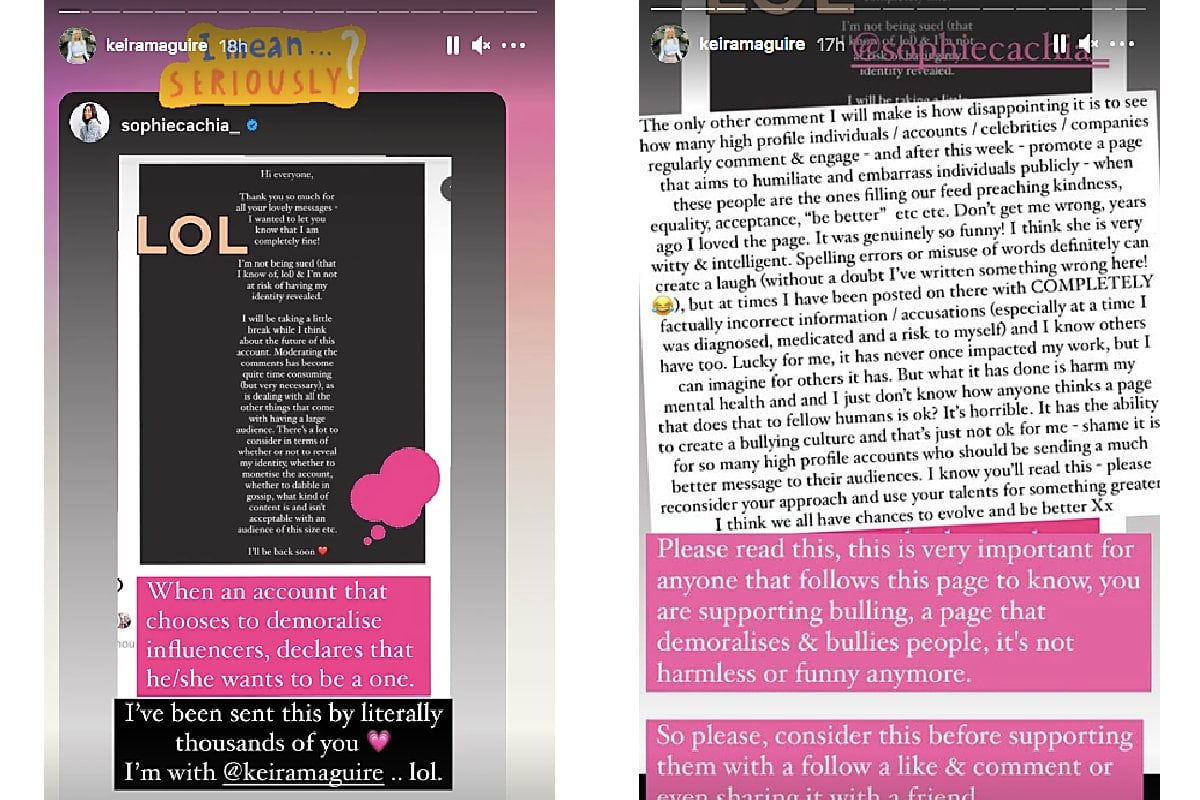 There were rumours the account was being sued for sharing a particularly... compromising video of a Bachelor contestant and some white powder, but the account owner said this wasn't the case and they were simply wondering about its future - as it took a lot of their free time to monitor comments and it is not currently monetised.

It was back about a week later, much to the dismay of many in the 'influencer' industry.

Celeb Spellcheck has an ally in Aussie Influencer Opinions, which has a very self-explanatory name. The account showed support for Celeb Spellcheck when called out by Keira, which led them to a feud with another influencer, Ruby Tuesday Matthews. 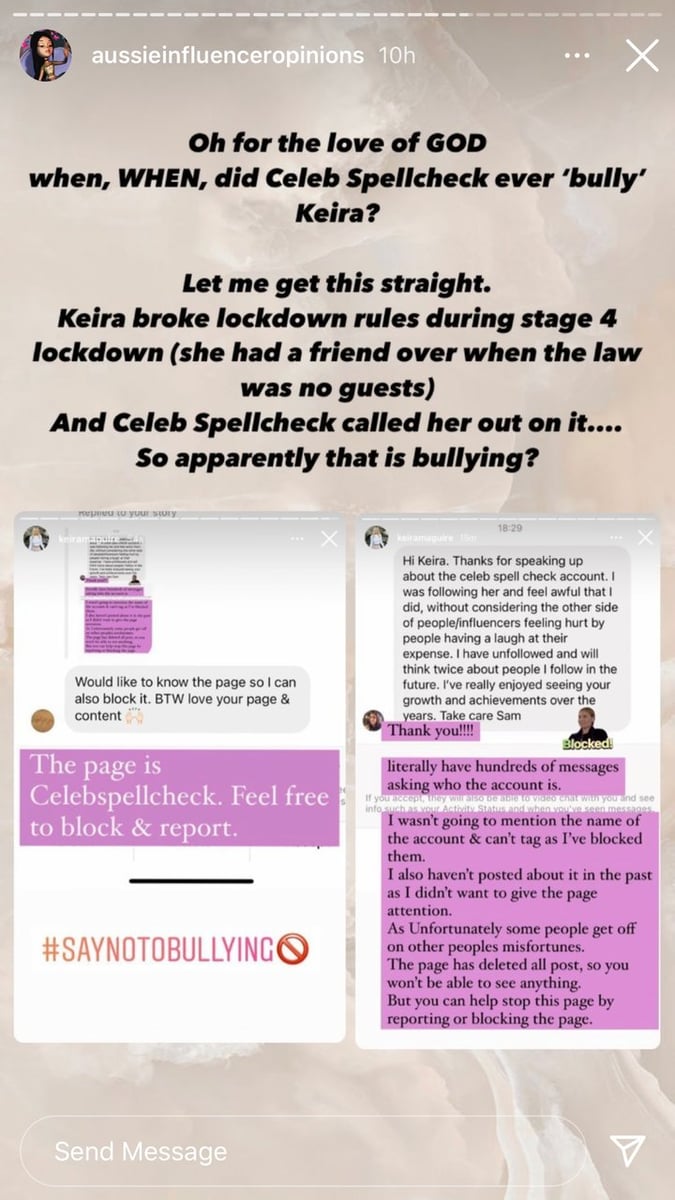 Matthews said the owner of the account was a "bully" and said "I'd hate to see you in Celeb Spellcheck's boat", a reference to the rumour it was facing legal action.

Not only are these accounts sharing the drama, they're now actively involved in it.

'Blinds' aren't new; I'm unashamedly a veteran reader of BlindGossip.com. There's also Crazy Days and Nights, the UK has Popbitch, and there are plenty of others to be found among Twitter and Tumblr's stan culture.

But on Instagram, they cater more to your casual gossiper.

I'm no psychologist, but the appeal of these accounts seems obvious: The gossip is endless, sometimes juicy and sometimes wholesome. Either way, it's fun to feel like we're 'in the know' and part of a secret club.

These accounts get bonus points because you don't have to seek out the club. After requesting a follow (most are set to private, which makes them seem even more exclusive, though they accept basically everyone), the club comes to you via your Insta story feed.

The appetite for gossip is similar to what used to drive sales of gossip magazines, and what still drives clicks on tabloid sites like TMZ and the Daily Mail, but while traditional media has long been hyper-focused on unflattering shots and compromising positions, these accounts highlight the mundane: Who tips well, what your favourite actor's coffee order is, what stars are overcome by strangers' dogs (Jen Aniston is a big dog patter, apparently) and who is kind to airline staff.

Paparazzi are back, influencers can once again share pics of their cocktails and cafe brunch, and awards ceremonies are finally abandoning Zoom.

But in a year, the landscape of celebrity gossip has changed for good.

Reply
Upvote
1 upvotes
Eh. What's going on behind the scenes on a movie set, or calling out hypocrisy by Influencers etc is one thing, but I'm not a fan of pregnancy rumours or revealing relationships that people might prefer to keep private. How long before they're outing gay people who aren't ready? Ian Thorpe has spoken about how damaging all the rumours about him being gay were when he was young and trying to understand his sexuality, I'd hate to see that happen to more people.
Resources
Very Peri
Skin
News
General
Opinion
True Crime
Politics
Sport
Explainer
Entertainment
Celebrity
Reality TV
Movies
TV
Books
Rogue
Royal
Lifestyle
Beauty
Fashion
Weddings
Home
Wellness
Health
Fitness
Travel
Food
Family
Before The Bump
Pregnancy
Baby
Kids
Teens
School
Parent Opinion
Work & Money
Money
Finance
Career
Lady Startup