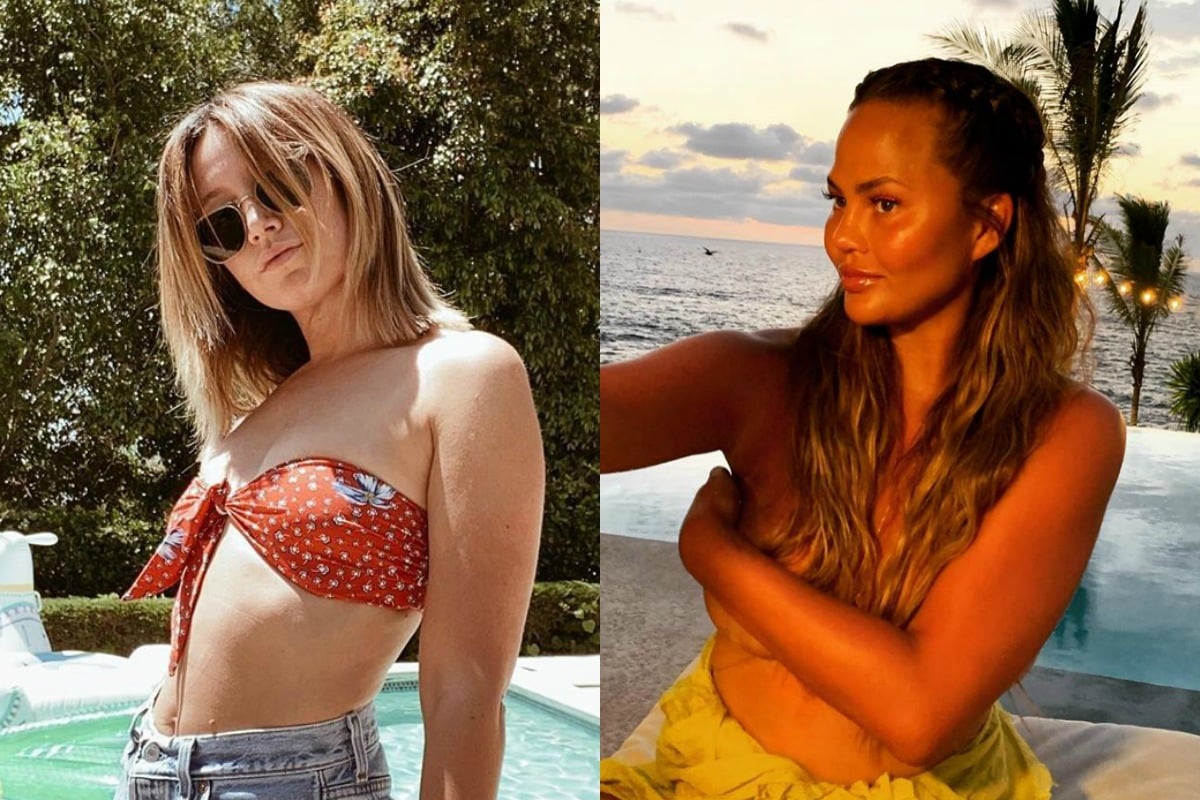 Has anyone else noticed that a whole heap of celebrities have started getting their breast implants removed? No? Just us?

Watch: Check out this Ask Mia clip on injectables. Post continues below.

While breast augmentation continues to be one of the most requested cosmetic surgical procedures in Australia (FYI: it pretty much never budges from its position in the top five procedures), it seems celebs aren't afraid to say goodbye to them for good - and be vocal about why the ditched them, too.

Breast explant surgeries may often be related to health issues and complications (some of which can include things like ruptures, scarring issues, rippling or malposition), while many are due to a change in cosmetic preference. Hey, it happens!

Listen to Mamamia's podcast for your face, You Beauty, where host Leigh Campbell explains 'baby botox'. Post continues below.

Ashley Tisdale recently revealed on Instagram that she had her breast implants removed and was feeling "happy to finally be fully me" after experiencing "gut issues" and "food sensitivities". Other celebs like Chrissy Tiegan have simply decided it's time for a change and they're "just over it".

﻿We've rounded up a string of celebs who have had their breast implants removed, and shared the reasons why.

In a recent Instagram post, High School Musical star Ashley revealed she had explant surgery after struggling with "minor health issues that were not adding up."

In her lengthy caption she wrote, "Years ago I underwent breast enhancement surgery. Prior to the surgery, I constantly felt my body was less than, and thought this change would make me feel more whole and more secure about myself. And for a short period of time...it did."

After consulting many holistic and non-holistic doctors, she said she learned the "importance of living a non-toxic life."

Hey guys, this is probably the most personal post I’ve ever shared. As you know, I’ve been very open about my mental health journey and feel that this is equally important. Years ago I underwent breast enhancement surgery. Prior to the surgery, I constantly felt my body was less than, and thought this change would make me feel more whole and more secure about myself. And for a short period of time…it did. But little by little I began struggling with minor health issues that just were not adding up—food sensitivities as well as gut issues (full story on @frenshe) that I thought could be caused by my implants. So, last winter I decided to undergo implant removal.  This journey has been one of growth, self discovery, self acceptance and most importantly self-love. This picture above was taken two months after my explant surgery and I think you can tell just how happy I am to finally be fully me. Over the years I’ve met with many holistic and non-holistic doctors and learned the importance of living a non-toxic life. I’m super excited to share with you what I’ve learned thus far, and would love for you to take this journey with me by following @frenshe, where we take an honest approach to our well-being and openly speak to health, beauty and everything in between. I can’t say I’m the proudest of the choices I made in the past but I don’t regret it because it got me here today. ❤️ Love you all! @frenshe is NOW LIVE!!

"They’ve been great to me for many years but I’m just over it," she shared on Instagram. "I’d like to be able to zip a dress in my size, lay on my belly with pure comfort!" We feel that.

The model was also completely candid about undergoing breast surgery while she was unknowingly pregnant, writing on Twitter, "so the morning of John's album release, he wakes up at 3am to do Good Morning America. I woke up with him and was like man, should take my monthly test to be disappointed... I was not disappointed. But I was scared shitless. Was pretty positive you shouldn't get your boobs out while pregnant? Pretty sure."

"So we prayed to the boob surgery gods that everything would be okay. Went to every appointment terrified. Even without the surgery, I didn't think I could get pregnant naturally anyway. So the odds just felt... bad."

"But what they say so often can be true. When you give up on trying, life has a way of surprising you. In summary, my boobs hurt."

Hi hi! So I posted myself getting a covid test on the twitter, as I’m getting surgery soon. A lot of people are understandably curious (and nosey!) so I’ll just say it here: I’m getting my boobs out! They’ve been great to me for many years but I’m just over it. I’d like to be able to zip a dress in my size, lay on my belly with pure comfort! No biggie! So don’t worry about me! All good. I’ll still have boobs, they’ll just be pure fat. Which is all a tit is in the first place. A dumb, miraculous bag of fat. ❤️

In an interview with Allure, the Spice Girl turned fashion boss discussed being comfortable in her own skin in a way she never was before. Looking at an old photo, Beckham referred to her breasts and explained, "I don't have them anymore," before hinting, "I think I may have purchased them."

When asked what happened to them, the star explained she had them removed - but not because of pain or complications.

While there has been much speculation by her fans in the past, this was the first time she had publicly spoken about her transformation.

All dressed up for date night with @davidbeckham 🧡🧡

Glee star Heather Morris spoke out about her experience with breast implant removal, telling Fitness magazine that her chest was too painful when she exercised, causing her to have them taken out.

"Implants were something I thought I wanted when I was younger, and now I don't," she said in the interview. "It was hard being active with them, because my chest was always sore. It hurt a lot, and I didn't like being in pain - so they had to go!"

Former Bachelorette star Ali Oetjen also went under the knife to have her breast implants removed, after revealing she "got them for the wrong reasons."

She shared her entire experience on Instagram (like, the pre-surgery jitters and recovery process - not the actual procedure) and told her followers, "To everyone that said they’re too big, you hurt my feelings. To myself, I will never change my body for someone else. The lesson learnt when I was strongest. I don’t want to have huge boobs!"

"I don’t feel comfortable with them…It is a personal thing but knowing I got them for the wrong reasons, I don’t want any girl to go through that same thing. So that is why I wanted to share it to make sure other girls don’t make that mistake."

On an episode of The Real Housewives of Beverly Hills in 2016, Yolanda Hadid (mum to supermodels Gigi, Bella and Anwar), shared that her breast implants had taken a toll on her health, and had them removed after being diagnosed with Lyme Disease. She found out her implants had ruptured after doctors discovered silicone dispersed around her body, which had caused infection. "Your health is your wealth so please make educated decisions, research the partial information you’re given by our broken system before putting anything foreign in your body," she shared on Instagram.

❤️Fifty Five and smiling from the inside out.... Finally back to the original 1964. Living in a body free of breast implants, fillers, botox, exstensions and all the bullshit I thought I needed in order to keep up with what society conditioned me to believe what a sexy woman should look like until the toxicity of it all almost killed me.......... Your health is your wealth so please make educated decisions, research the partial information you’re given by our broken system before putting anything foreign in your body. It took me many years of undoing some bad choices I made for myself before I finally found the freedom to sustainable internal beauty and acceptance of what is the best version of myself by nobody’s standards but my own.........................It’s on us to learn to love our selves and celebrate our unique, one of a kind beauty at all ages as we move through this journey called “life”. Beauty has no meaning without your health................... #ShamelessSelfie #55 #BeautyStartsFromWithin #AgeComesWithWisdom

Have you ever undergone a breast augmentation? What was your experience? Share with us in the comment section below.﻿

I
i'm with the band 2 years ago

Reply
Upvote
4 upvotes
Yep.  Had mind removed early this year after 20 years.  The only reason I got them in the first place was because I let an ex-boyfriend make me feel insecure about their size (a full B cup).  They served me well for a while, yet I always hated not being able to hug someone tightly, hold my baby close to my chest, or lay on my stomach properly.
The clincher for me came when I found out that my implants were recalled as they were known to cause a rare type of lymphatic cancer.  Also, my body started to react to them a few years after implant, and I developed a myriad of health problems and autoimmune conditions.  My body was basically fighting against two foreign objects.
I'm absolutely stoked I had them removed and feel more confident now without them then I did with them in.
Natural boobies are hot and I forgot how good they feel!!
R
rush 2 years ago