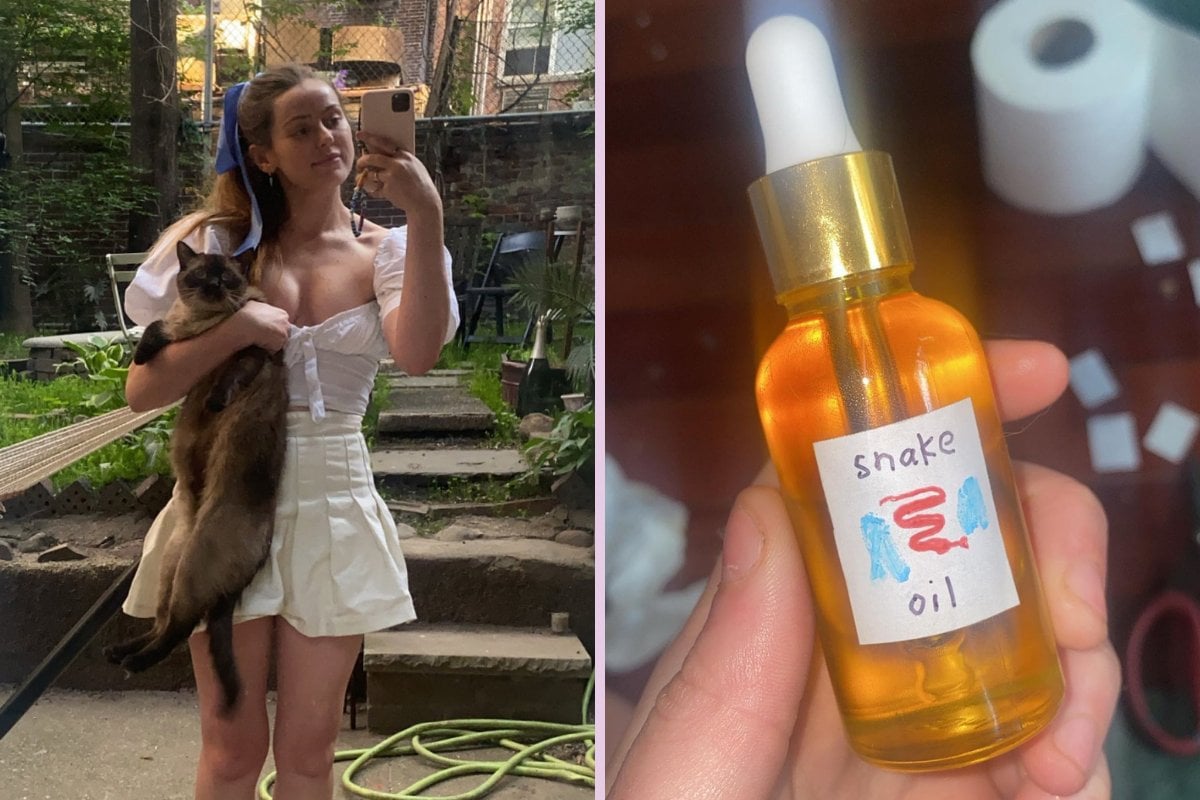 Caroline Calloway makes money by selling scams. By now, her 676,000 followers would know this all too well. The 29-year-old herself is unashamed about it.

The infamous influencer inadvertently gained worldwide attention in 2019 when her former best friend, Natalie Beach, wrote an essay for The Cut titled, 'I Was Caroline Calloway'.

Beach explained she was Calloway's unknown paid ghostwriter - the voice behind her famous Instagram captions that crafted an aspirational fairytale-like persona. She also claimed that Calloway paid for a large portion of her followers. Essentially, the viral essay outlined all the reasons why the Instagram influencer's success was built on a mountain of lies.

The essay launched Calloway into mainstream media publications and, in her signature style, she leveraged off the infamy by announcing she was writing a book titled Scammer.

It's still unclear whether this book actually exists.

The self-published book - which has been available for pre-order since January 2020 - has never been sent out to all the people who bought it. It's still available now on her website. She still claims that she will be shipping it out this year.

Yes. To recap: Calloway sold her followers a book about her scams titled 'Scammer'. No one has received their copy yet.

Now, though, Calloway has moved on to another product to sell. A $75 homemade skincare product she calls 'Snake Oil'.

"We all know that I have amazing skin. Everyone knows this. This is just historically correct. I have the skin of a viral 18-year-old TikToker, and I am turning thirty," the influencer said in a video promoting the new product.

Calloway explained to her followers that she has been mixing her own skincare oils for years. When her friends suggested she sold the oil to followers, she recalls telling them: "Oh my god, I love money. What a great idea."

At first, she shared self-drawn labels for the skincare product. Calloway has since released the "professional" packaging that will apparently be shipped out to customers.

She claims the product is an "elixir of youth".

The 29-year-old didn't provide any evidence that the oil works, except for photos of her when she was 21 versus her now, which she claims has improved by using this homemade concoction of oils.

As mentioned, Calloway has a well-documented history of selling scams.

In 2016 Calloway landed a book deal with Flatiron Publishing. The book was a memoir titled, And We Were Like. In 2017, she withdrew the deal, because she felt she had sold a facade to the publisher that didn’t depict her authentic self. Calloway had already spent her book advance money when she pulled the plug, and was forced to pay back that money - which she completed last year, by raising six figures via OnlyFans.

She disappeared for a year following the ordeal, rarely posting to her Instagram feed. But in early 2019, she piqued public interest again when she began advertising her world tour of 'creativity workshops'.

Calloway charged US $165 a ticket for the four-hour seminar.

Journalist Kayleigh Donaldson exposed the tour as a "Fyre Fest in the waiting" in a viral Twitter thread.

That Instagram influencer I occasionally check in on because she's The Worst is now charging $165 for a 4 hour "seminar" on how to be yourself. pic.twitter.com/zLvBFn9dPI

The tour went ahead nonetheless, until attendees of the first two seminars reported their profound disappointment at the lack of organisation. Calloway cancelled the remaining workshops and the "scam" went viral.

"I think that criticism is really valid and I apologise to anyone who felt cheated by the price point of $165," she wrote on her Instagram stories at the time.

"I take full responsibility for letting my total inexperience with event planning and GREED create a situation where the details of the tour were ever-changing, preparation was inadequate, and the event did not match the description by the time it went on."

Her reasoning for such behaviour is not clear, but in her interviews with media publications, she shares a common theme of her desire to be famous.

She told The Irish Times last year: "I love fame."

Reply
Upvote
Clary sage oil can be used to induce labour in pregnant women through topical application (I was recommended it by my midwife when I was past my due date). Since this oil has Clary sage there should be a warning on the packaging. This person should be dobbed in to the FDA.

Reply
Upvote
4 upvotes
I think the phrase "more front than Myer" applies here, doesn't it. Good heavens, where to start? The bit where she's making it in her kitchen - you can see a bloody cat hair on the bottle she's holding! The fact that Clary sage is apparently dangerous for pregnant women? The fact it's literally called Snake Oil? I swear I'm starting to think this chick is actually incredibly intelligent, and what she's doing is a long-term performance art piece/social experiment designed to show just how gullible people are when it comes to Influencers and social media. I have to believe this is a joke, how could anyone believe a word she says? Frankly, anyone who is stupid enough to put this crap on their face shouldn't be surprised when their skin peels off.
C
cat 3 months ago

Reply
Upvote
@rush  she didn't send anyone her book,  she's not going to deliver this to anyone either. And anyone who thinks she's serious deserves whatever they get at this stage. She's either doing a performance piece or she's just a scammer who has found the worlds easiest scam- either way, its kind of genius.

Reply
Upvote
@cat I couldn't believe anyone actually follows her for real, so I had a look at her insta page. 676,000 followers, and the highest number of comments on a post that I saw was a couple of hundred, on a Snake Oil post. Most of them had 20-30, max. Dodgy numbers, but it makes me feel slightly better about humankind to know that most of her followers are probably bots!