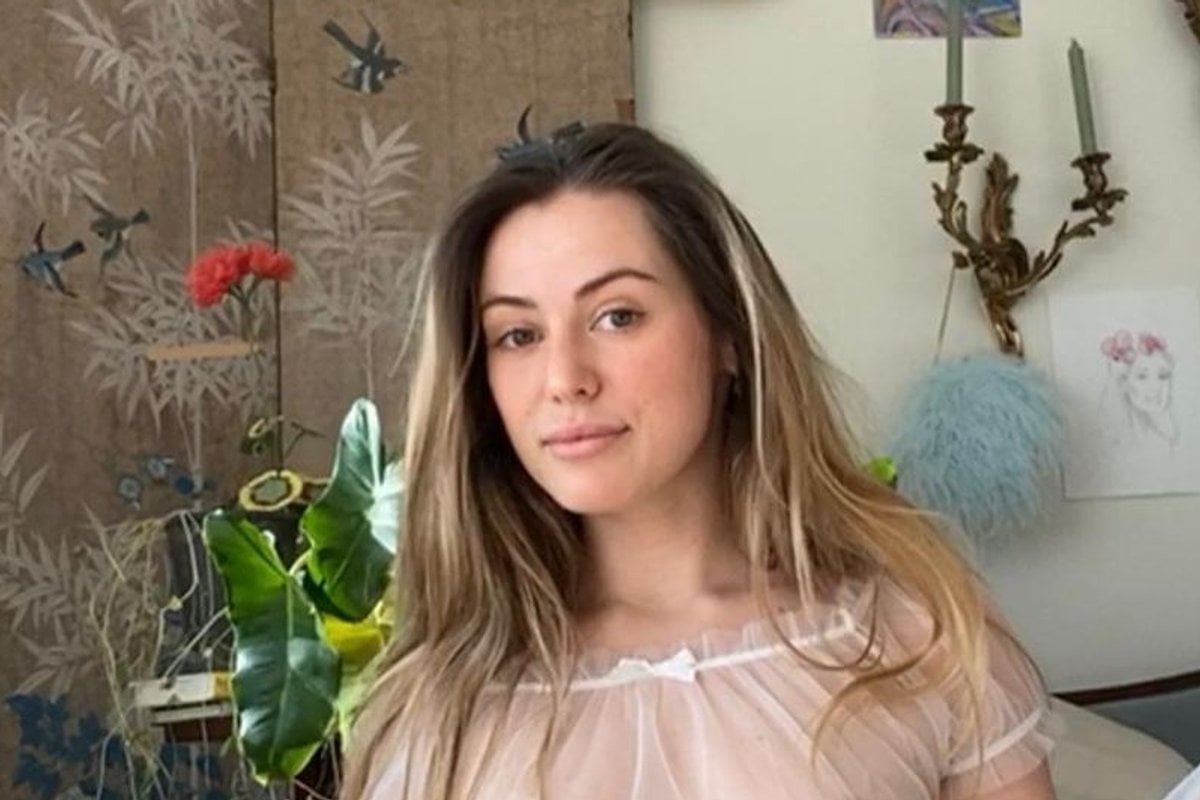 Caroline Calloway is unashamed about her scams and shams. She embraces every lie she's told people, as though admitting to her fraudulent activity is the epitome of authenticity.

You may remember her name from September last year, when her former best friend, Natalie Beach, wrote an article for The Cut titled, I Was Caroline Calloway. It went viral, explaining how Beach was Calloway's unknown paid ghostwriter - the voice behind the captions that made Calloway famous. She also claimed that Calloway paid for a large portion of her followers early on. Essentially, it outlined all the reasons why the Instagram influencer's success was built on a mountain of lies.

How did Calloway respond? She told her then 800,000 followers (now 685,000) to "read Natalie’s article" and to "leave a comment... even if it’s insulting me". She admitted to her lies, and put the link to the article in her Instagram bio, so that her followers could read about how she had deceived them for years.

The essay launched her into mainstream media publications, and in her signature style, she leveraged off the infamy to make money by announcing she was writing a book titled Scammer.

Any tender mysteries of life you would like me to talk about in this little book?

The self-published book has been available for international pre-order since January this year. It's still available now.

"It's finally here! Seven years of writing for you and this is the first time you can hold my words! Ever!" the description for the book says on her website.

"The goal of this book is to make a pretty object that you can hug and display and cherish, while also giving you an escape hatch from your life, like all good authors do. On Instagram you can disappear into the coziness of my writing voice, but only for so long. Captions are done in a hot sec."

The release date of the book has never been exact, but in February, the social media star told Buzzfeed it would be released "as late as April... it seems like it may be much sooner".

In March, Calloway announced to her followers that the "manuscript is copy-edited and ready to go," but that her printing company was shutting down due to the pandemic and hence there were some delays.

Due to the lateness, she offered a refund to anyone who was "hurting financially during these uncertain times".

This is the cover for SCAMMER. The manuscript is copy-edited and ready to go, but our printers are not. They are shuttering for two—maybe three—weeks since boutique book-making is not exactly an essential industry. Adam and I looked into going with a larger company, but in addition to not being able to guarantee quality (we don’t have time to order a new set of galleys before we commit to the final print) small business need our support more than ever. We’re not going to pull our order with them because we know that they are counting on our business, but you are welcome to email Ari at [email protected] if you‘re hurting financially during these uncertain times and would like a refund. Pre-orders for Scammer have finally (finally!) closed so if you haven’t already reserved a copy you will not be able to do so at a later time. Can’t wait to share this art with you! 🦋🍒🕯

Throughout the year, Calloway has done a number of interviews with media in the lead up to her book release, including with Buzzfeed,  The Irish Times and The Guardian.

On August 7, Calloway posted an update to her website about her book.

"The book is now estimated to ship by August 31st. Please check your email and follow @carolinecalloway on Instagram and @carolinecaloway on Twitter for any further updates. As soon as orders begin to ship, tracking numbers will be provided," the update reads.

She again advertised that anyone who wants a refund will get one.

On August 24, a person commented on one of her Instagram posts, asking "Is there somewhere that I can read a blurb for Scammer?"

Calloway responded: "No. It's a gamble."

"It's a gamble," Calloway says in response to request for a blurb of her book. Image: Instagram.

August 31 came and went with no announcement or acknowledgement on her book.

When followers asked for an update, they received no answer. 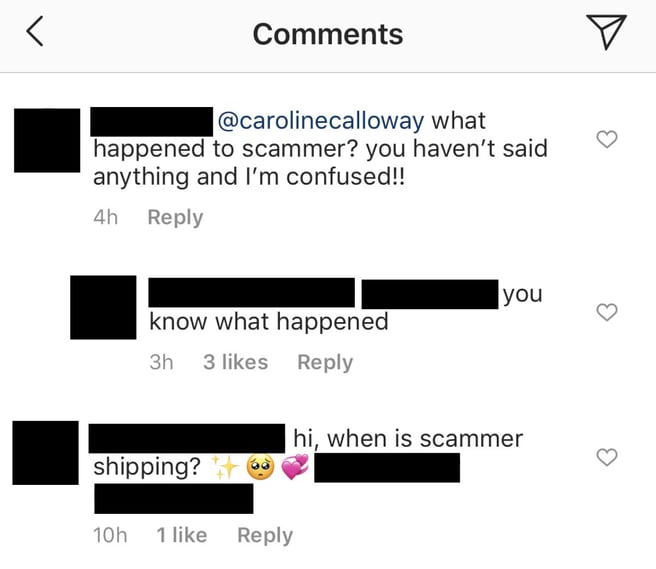 The comments section in Caroline Calloway's in September. Image: Instagram. 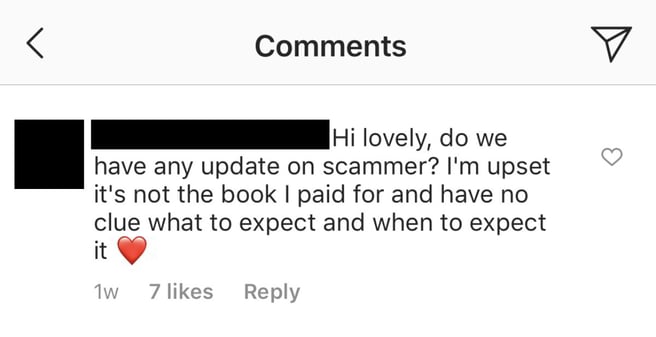 On September 5, Calloway posted a video titled, 'The Tumor in My Mom’s Asshole'.

The video explained her mother's health battle with cancer and updated fans with the new shipping date for her book.

That date passed without acknowledgement, again.

Then, on December 2, Calloway seemingly admitted the book is unfinished, despite saying in March that the "manuscript [for Scammer] is copy-edited and ready to go".

In a post about paying off her debt by joining OnlyFans, a subscription-based website that allows creators to charge viewers for their content, Calloway said she was "free" of debt.

The influencer added she can now "make SCAMMER the best book in the world. No topic is off limits".

She continued: "Up until today delays with the book have gone hand-in-hand with shattering tragedy. Global shutdown because of the pandemic. Mom getting cancer on the first anniversary of my Dad’s suicide. For the first time in a long time, I have good news. I’m free.

"Scammer’s going to be amazing. This is no longer a book I’’ writing [sic]. This can finally be THEE [sic] book I’ve been waiting my whole life to release."

She did not provide an updated shipping date. Exactly how many copies has been sold so far is unknown, but Calloway did tell BuzzFeed in February that "it’s been so profitable".

Mamamia spoke to one woman who explained why she bought the book initially, and why she asked for a refund.

"I thought Scammer would contain some insights from someone who has been 'cancelled', this rather new internet phenomenon, so I preordered the book," Ellie, who lives in Australia, shared with Mamamia. "I wanted this woman to reclaim her credibility and establish herself as an actual writer instead of a defensive Instagrammer."

Following the missed September 17 'shipping date', Ellie asked for a refund which she was granted.

"I guess I just don't want my hard-earned Australian dollars collecting interest in her bank account any longer."

If the book is never published, it will be the umpteenth time she has 'scammed' her followers.

Here's a brief history of Calloway's history in the social media spotlight.

Why is Caroline Calloway famous?

She changed it at 17, because Calloway, her middle name, “will look better on book covers someday".

She studied at the University of Cambridge where she catalogued her days in lengthy, intricate captions on Instagram (which, as mentioned above, were actually written by her then-best friend, Natalie Beach).

“I always knew I wanted to be a writer,” Calloway told Man Repeller in 2018. “I’ve always been convinced that I have stories to tell and that I would be successful at telling them.” 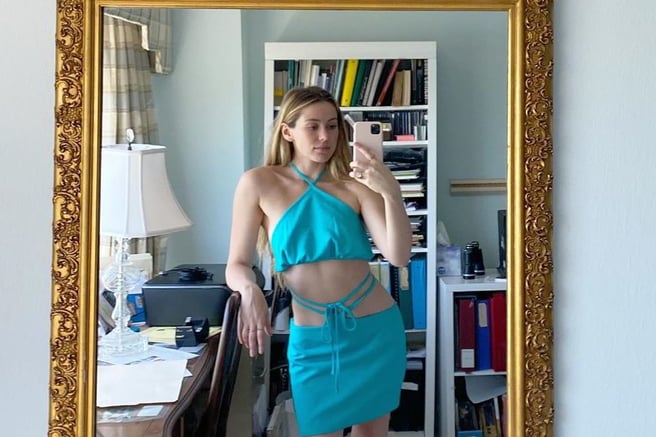 Her aim was to land a book deal, which she achieved in 2016 with Flatiron Publishing. The book was a memoir titled, And We Were Like. In 2017, she withdrew the deal, because she felt she had sold a facade to the publisher that didn’t depict her authentic self. Calloway had already spent her book advance money when she pulled the plug, and was forced to pay back that money - which she completed this month, by raising six figures via OnlyFans.

Calloway disappeared for a year following the ordeal, rarely posting to her Instagram feed. But in early 2019, she piqued public interest again when she began advertising her world tour of 'creativity workshops'.

Calloway charged US $165 a ticket for the four-hour seminar.

Journalist Kayleigh Donaldson exposed the tour as a "Fyre Fest in the waiting" in a viral Twitter thread.

That Instagram influencer I occasionally check in on because she's The Worst is now charging $165 for a 4 hour "seminar" on how to be yourself. pic.twitter.com/zLvBFn9dPI

Happy Scammer Day!
So day 1 of her nationwide tour & she's already dropped the promise of handwritten letters & is now asking people attending her DC event tomorrow to bring their own lunches so she won't have to cook them! pic.twitter.com/Fue7lKEWnB

The tour went ahead nonetheless, until attendees of the first two seminars reported their profound disappointment at the lack of organisation. Calloway cancelled the remaining workshops and the "scam" went viral.

"I think that criticism is really valid and I apologise to anyone who felt cheated by the price point of $165," she wrote on her Instagram stories at the time.

"I take full responsibility for letting my total inexperience with event planning and GREED create a situation where the details of the tour were ever-changing, preparation was inadequate, and the event did not match the description by the time it went on."

Then, in September 2019, the aforementioned article by her former best friend was published and Caroline Calloway was thrown into the eye of a media storm.

Now she's managed to profit off her last scam, with a seemingly even bigger scam (if, indeed, no book is ever published).

Her reasoning for such behaviour is not clear, but in her interviews with media publications, she shares a common theme of her desire to be famous.

"I love fame. I love being written about," she told The Irish Times earlier this year.

Speaking with The Guardian in April, she further explained her quest for public prominence: "The idea that my life would be something I shared with the public wasn’t just something that I assumed – it was something that I actively wanted. I still want it."

Mamamia reached out to Caroline Calloway for comment, but did not hear back.

Reply
Upvote
1 upvotes
I’m getting strongly reminded of Belle Gibson when reading this article. I bet these two have super similar psychological profiles. The main difference here is that with Ms Calloway, people (her readers, customers, publishers - WHY does she keep getting book deals??) seem to be lining up to enable this continued pathological behaviour.
cat 4 months ago

Reply
Upvote
@mamamia-user-784002933 belle seems to have some form of muchausens though, she wants to be loved but without anyone knowing she’s a fraud. This girl just seems like a regular con artist who wants fame and fortune, or infamy will do. More of a Trump than a Belle Gibson.
kelloneill 6 months ago