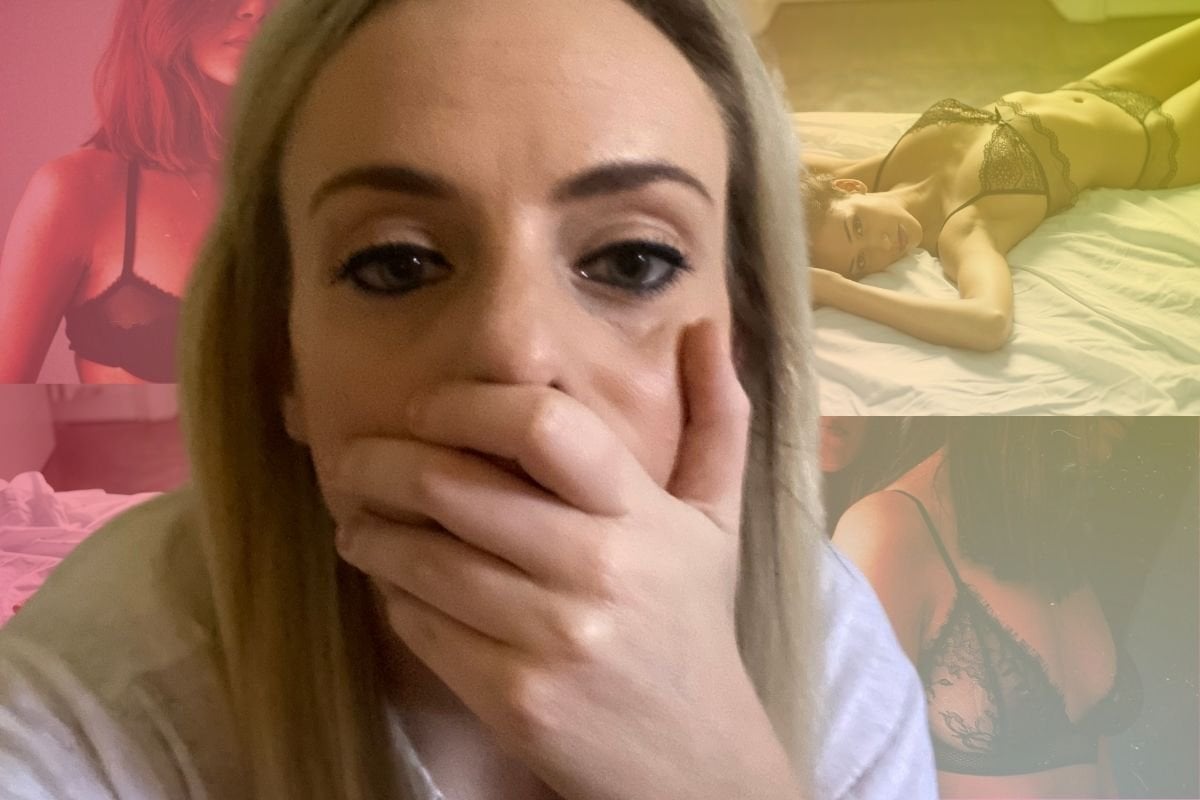 Firstly, I would like to acknowledge that I grew up Catholic and have a lot of residual guilt over sexual content.

So this review comes from... that perspective.

After 12 months of hearing whispers about OnlyFans, I decided to sign up to find out what the hell it is and what goes on there.

For context, OnlyFans is a social media platform - like Instagram or TikTok - where users can buy or sell original content via a subscription. As you can imagine, people aren't typically paying for a nice photo of a sunset. Unless that sunset has a butt in it. In which case, yes, people are paying for that and they'd like to see more, please.

Accounts are behind a paywall, and users (mostly) post X-rated videos and photos for a monthly fee. You can also leave tips for creators (if, for example, you particularly like their butt), as well as comment on their content and direct message them, if you want to ask for something... specific. OnlyFans takes 20 per cent of what a person makes, with the creator getting the other 80 per cent.

Before a select few people start yelling at me in the comments, it's worth noting that OnlyFans is not exclusively for adult content. Some creators are food or fitness influencers who use it to establish a paid subscriber base. But one of the defining features of OnlyFans - and the reason it's thrived as a platform - is that it doesn't have the same censorship rules as other forms of social media. The buying and selling of adult content is at the core of its business model, and its top creators are women.

For a while now, I've been seeing 'celebrities' plugging their OnlyFans on other social media platforms, and shamefully, my curiosity got the better of me.

So I signed up and subscribed to TWO OnlyFans accounts - one, an Australian former reality TV contestant, and the other, an American celebrity with over half a million followers. No, I can't tell you what she's famous for. Because it's unclear.

Here's everything you could possibly want to know about what OnlyFans is really like.

A recap of my time on OnlyFans.

I need you to understand that I paid for this with my own money and I won’t be invoicing work for it because it’s too complicated to explain.

After creating an account for free, I subscribe to the Aussie reality star for $9 (a month), and the American celebrity for $25. I immediately get an (automated) message from one of them.

I click on one of her recent posts and she's having sex with two men. But it’s really short? Like five seconds... and I think that's because you have to pay for extended versions? Which is a bit annoying considering I just paid to subscribe and omg why am I getting into the politics of what I deserve now that I've subscribed to pornography.

There's a feed of short videos and photos, and there's an option to leave tips. As I'm scrolling, I see one of the creator's post about checking your inbox, because there's something in there for you and wait.

Do I get this in my email inbox. Because that's also where I receive information about online shopping and reminders about upcoming appointments. Which folder will it go into - promotions? Social? PRIMARY? Spam??

No. It's my OnlyFans inbox. Thank god. But also, I'm grateful I didn't use my work email. I just have a feeling the IT guy would... find out.

Scrolling through the feed, I notice the posts have likes and comments as though this is Instagram but this isn't Instagram, this is pornography. And imagine posting a video of you having sex with someone and you get three likes?! How rude.

I'm refreshing my inbox and nothing new is coming through and I can’t decide whether I’m disappointed but MAYBE THINGS DROP THERE WHEN THE PERSON PUBLISHES THEIR PORNOGRAPHY. HOW WILL I KNOW.

Looking through the backlog of content these creators have posted, most of it seems to be filmed as though a man is watching it. Like they're speaking to the man about his penis. And what he wants... to do... to her.

THERE'S A MESSAGE IN MY INBOX PLS.

It's a new video that I have to pay extra for (eugh I'm not made of money), but I'm told I'm getting a discount. Look, it's a good marketing strategy but I don't entirely believe it.

I realise I can look up anyone I've heard of who has an OnlyFans account, so I stalk their profiles. All their content is locked, obviously (and spending more than $34 on this experiment seems absurd), but I learn that many creators specify in their bio that your OnlyFans subscription payment won't show up on your bank statement. How thoughtful.

The Australian former reality TV star posts entire pornographic films, with other men and women. It looks like it's filmed in a hotel, and appears to involve professional camera people, makeup artists, and so on.

The American celebrity, on the other hand, posts markedly different content. She shares photos and videos where she shows the odd boob, an angle of her bum, a selfie with transparent lingerie on. It's quite... tasteful?

OK jokes she's naked. But again it's not overly explicit.

Parts of what she's doing feel more like being an actress and doing provocative scenes.

This is an interesting development.

But there are A LOT of comments asking her for more, and getting pissed off that she doesn't post enough to justify the $25 monthly fee and THAT'S CAPITALISM BABY.

I'm assuming that generally, the more famous you are, the less you have to do to incentivise people to subscribe. But once you're on there, people will offer you more and more to go further.

Some accounts are free (so I subscribe to a few), with the idea being that they make money off tips. That’s smart. Good business acumen.

Most of the free accounts I see are hot people in lingerie. Not having sex necessarily, just posing in underwear. But the photos and videos do have to be more risqué than what you'd see on Instagram or TikTok, otherwise people would just go there and get that content for free.

I'm sorry but have I turned into an OnlyFans content expert. I think... yes.

I'm sent a lot of messages about unlocking more content for a fixed price, and I can see how you could spend a lot of money on here.

Speaking of, I look up who some of the top creators on the platform are, and end up subscribing to one for $10 a month (I've now spent $44, and Clare, sweetie, this is why you never have any money. Because you spend it on doing stupid things for no reason). Online, it describes this individual as a 'fitness influencer,' and that's why I subscribe - I want to see what it looks like to use the platform for something other than adult content.

Her content tends to involve her posting a provocative photo, and then asking users to 'tip for more'. I read that she's made literally millions of dollars from OnlyFans so I guess that's a good strategy? If you were interested?

After spending what feels like two full days deep in the world of OnlyFans, I'm left with a series of complicated thoughts.

It's women who are making headlines, going viral, and making a sh*tload of money from this platform. After spending hours looking at pornography created by women, I asked myself why I hadn't felt the urge to look up any men. So I did.

It's also a completely legal form of sex work, and allows sex workers to make their income independently.

With that said, I want to say something I know I'm not allowed to say.

Looking at some of the content on there (NOT all), I felt a twinge of sadness. Particularly for the reality star.

Yes, she's consenting to creating this content. Yes, she's profiting. But surely, the very nature of a social media platform like OnlyFans means that the only way to keep making money is to engage in increasingly explicit sex acts.

While OnlyFans gives creators significantly more control over who subscribes to you, and what they can send you, you can never fully control the behaviour of strangers on the internet. And that gets a whole lot more complicated when it's sensitive content they're interacting with. You can't control the comments you see, even if you have the ability to delete them. You can't control what they ask for, or what they show other people who aren't subscribed and the lens through which they do that.

The platform has processes in place to ensure only people 18 years and above can sign up, but like with anything, there are ways to get around it. So what if you make a bold decision at 16, or 21, or any age (I still make questionable decisions at 30), and regret it later on? Content can always be saved, and there's no way to know who has access to it. Where it might pop up. How widely it might be circulated.

Maybe I'm a prude, and it's likely my views will change as platforms like OnlyFans become more and more mainstream.

But as quickly as I subscribed, I unsubscribed from OnlyFans. I don't think it's a world I want to be a part of.