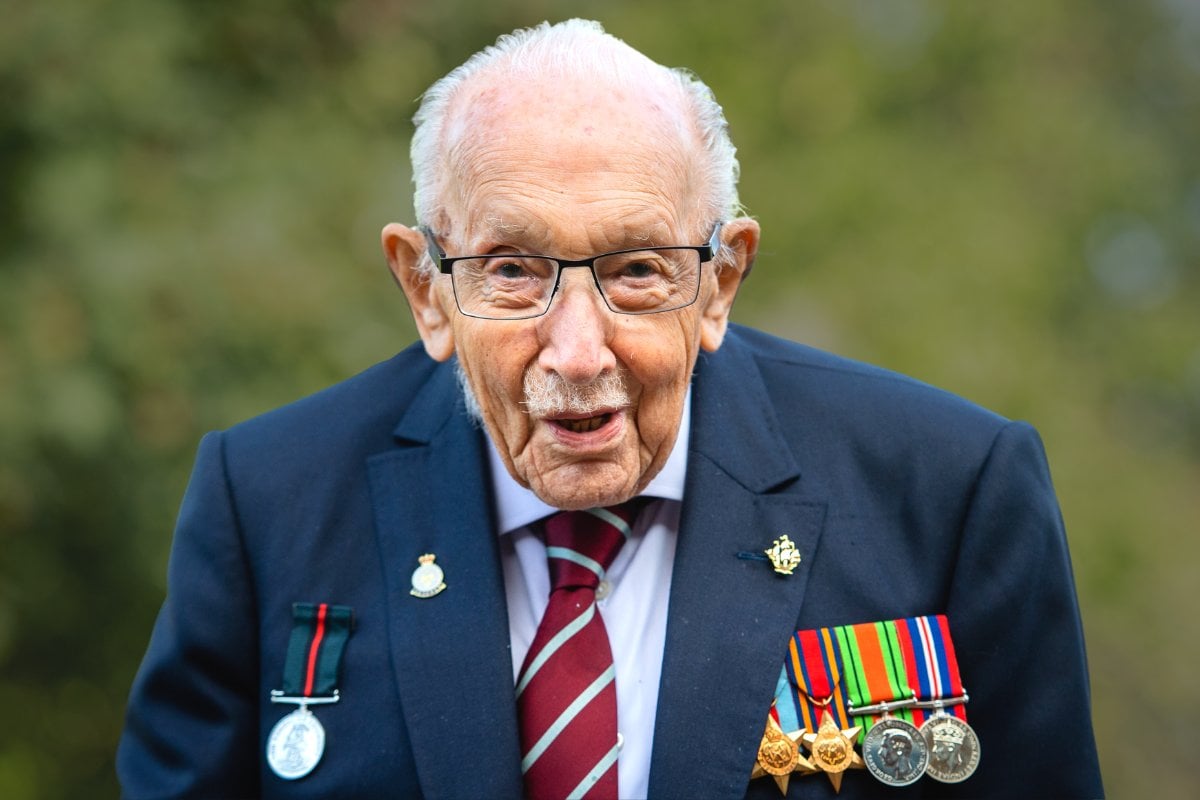 Captain Sir Tom Moore, the British World War II veteran and charity champion who raised millions of pounds for health service workers on the frontline of the battle against COVID-19, has died.

The 100-year-old died on Tuesday morning at Bedford Hospital. He had tested positive for COVID-19 on January 22 and was fighting pneumonia.

"It is with great sadness that we announce the death of our dear father, Captain Sir Tom Moore," his daughters said in a statement.

"We spent hours chatting to him, reminiscing about our childhood and our wonderful mother. We shared laughter and tears together."

Moore's fundraising efforts raised more than 32 million pounds (AU$58 million) for the UK's National Health Service, after he walked 100 laps of his garden before his 100th birthday during England's first lockdown in April.

Captain Tom, as he became known in newspaper headlines and TV interviews, set out to raise 1000 pounds for the NHS by walking 100 laps. But his quest went viral and caught the imagination of millions stuck at home during the first wave of the pandemic.

Donations poured in from across the UK and as far away as the US and Japan.

For three weeks in April, fans were greeted with daily videos of Moore doggedly pushing his walker in the garden.

But it was his sunny attitude during a dark moment that inspired people to look beyond illness and loss.

"Please always remember, tomorrow will be a good day," Moore said in an interview during his walk, uttering the words that became his trademark. 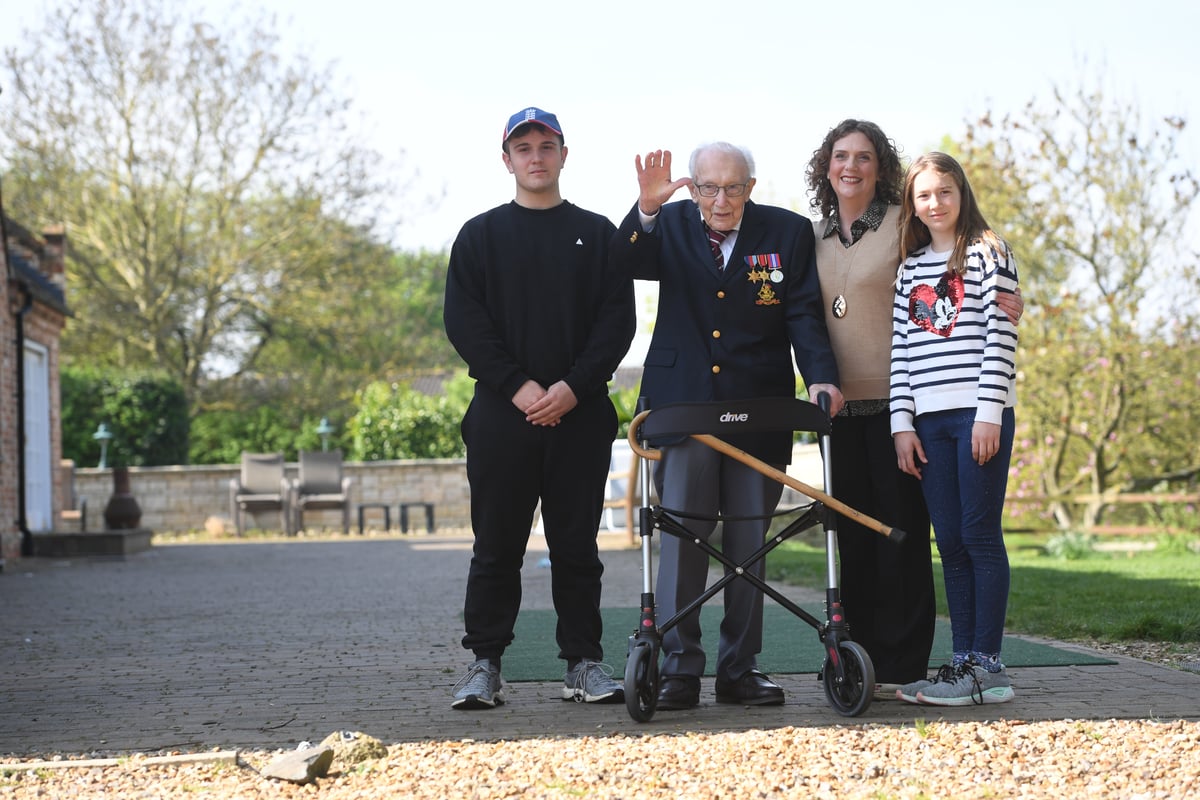 As news of his death broke, flowers and tributes began to pile up outside his Bedford home, over the fence from the garden which made him a household name.

But long before he was loved worldwide, Moore was already a British hero.

Moore, born in 1920, served in India, the Burma campaign during the Second World War, and later became an instructor in armoured warfare.

After the war, he worked as managing director of a concrete company and was an avid motorcycle racer. For 64 years, he organised his regiment's annual reunion.

According to his autobiography, he was first married to a woman known only as "Billie" in 1949. The pair divorced and he later married Pamela in January 1968.

Together they had two daughters, Lucy and Hannah.

Moore and Pamela retired to Spain, but returned to Britain when Pamela developed dementia. She spent her last years in a nursing home, where Moore would visit her every day until her death in 2006. 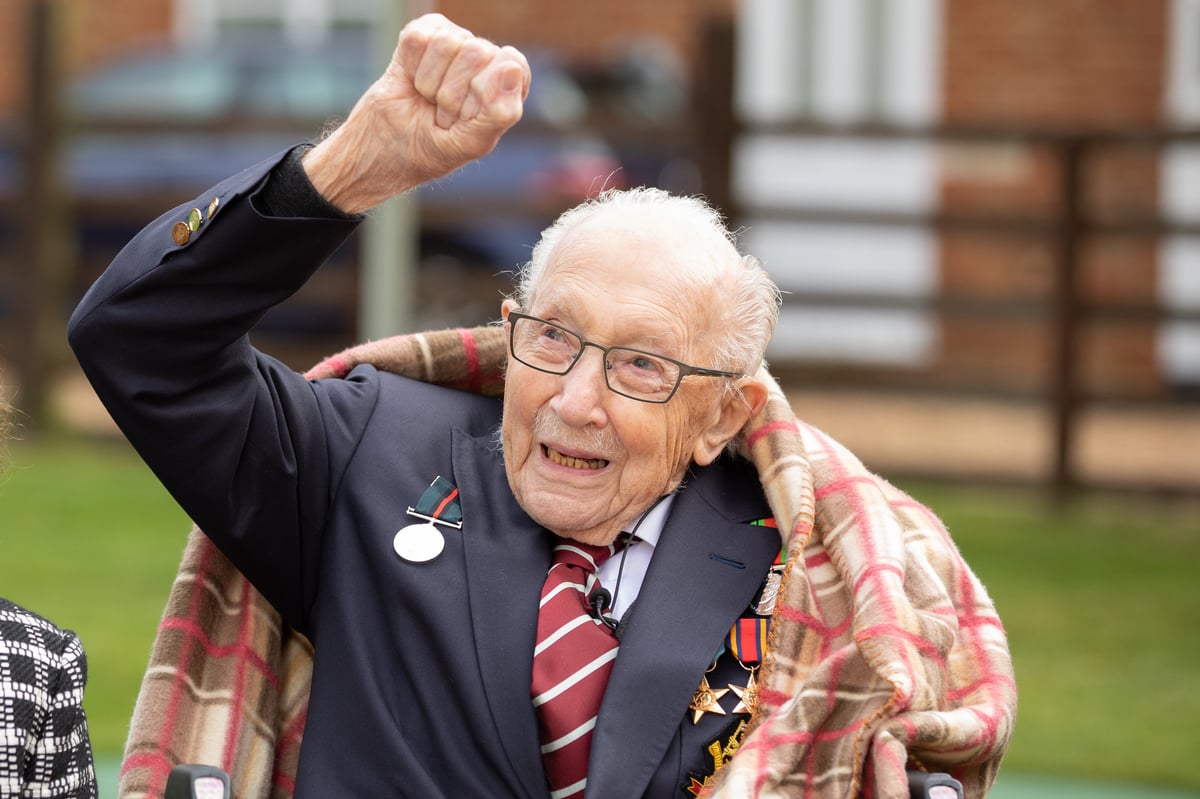 In 2018, Moore was treated for skin cancer and for a broken hip, broken rib, punctured lung and other serious injuries, following a fall.

He was still recovering from these injuries when he started his fund-raising walk.

A knighthood and a number one single.

As Moore made his up and down his garden 100 times, the world watched on in awe.

He increased the goal to £5000, but as the world watched on, it became clear there would be much more raised. Eventually he aimed for £500,000.

He achieved his target of one hundred lengths on the morning of April 16, watched at a safe distance by a guard of honour from the 1st Battalion of the Yorkshire Regiment, in which his WWII regiment merged in 2006.

Even with 100 lengths under his belt, Moore kept walking.

By the end of his 100th birthday, he had raised £32 million for the NHS from more than 1.5 million individual donations.

He also received more than 120,000 cards for his birthday, from all over the world. 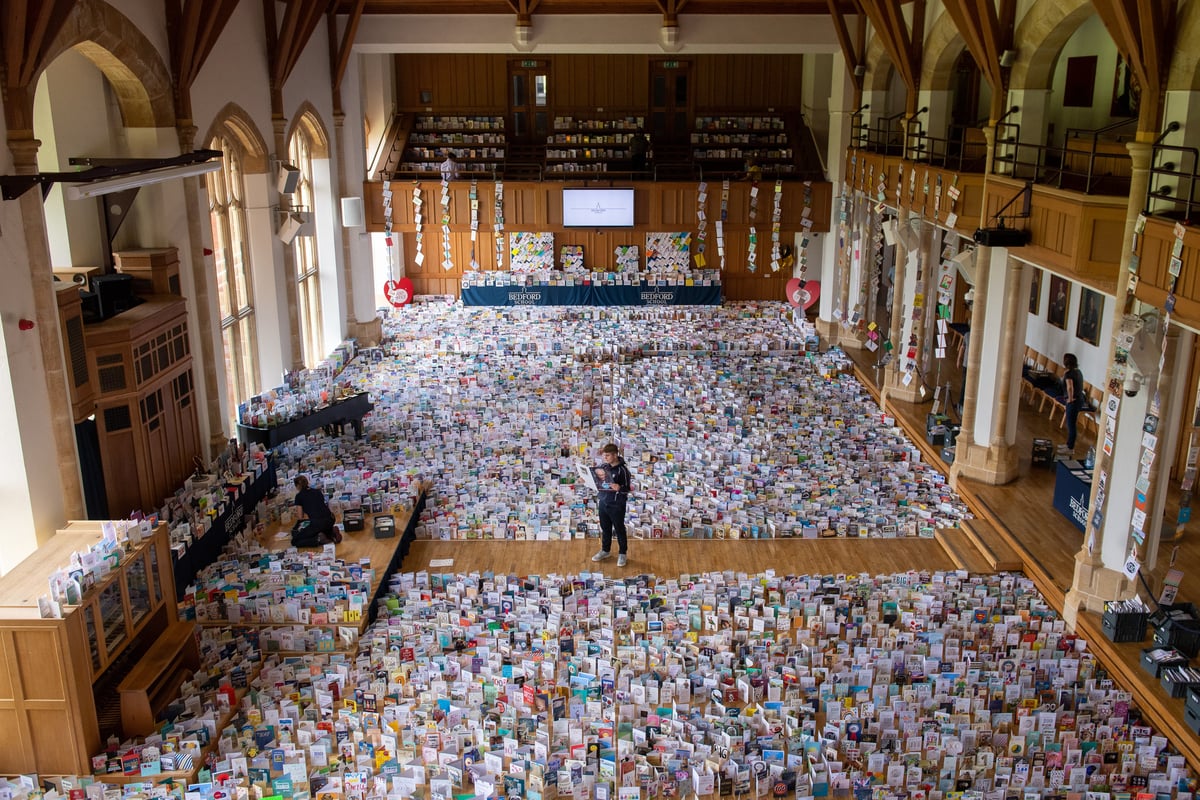 Captain Tom Moore's grandson with the thousands of birthday cards sent to his grandfather. Image: Getty.

The money raised has been used on well-being packs for NHS staff, facilitating rest and recuperation rooms, devices to enable hospital patients to keep in contact with family members, and community groups who support patients once discharged from hospitals.

"When we started off with this exercise we didn't anticipate we'd get anything near that sort of money. It's really amazing. All of them, from top to bottom, in the National Health Service, they deserve everything that we can possibly put in their place," Moore said.

"They're all so brave. Because every morning or every night they're putting themselves into harm's way, and I think you've got to give them full marks for that effort. We're a little bit like having a war at the moment. But the doctors and the nurses, they're all on the front line, and all of us behind, we've got to supply them and keep them going with everything that they need, so that they can do their jobs even better than they're doing now."

To mark Moore's 100th length, British singer Michael Ball sang 'You'll Never Walk Alone' for him on BBC Breakfast. Within 24 hours, it was made into a single featuring the NHS Voices of Care Choir, and Moore's spoken words.

All proceeds from the single went to the NHS, and on April 24 it went straight to number one on the UK singles chart, making Moore the oldest person to achieve that position. It also meant he was at number 1 on his 100th birthday.

The song even had the support of The Weeknd, whose single 'Blinding Lights' was the song's biggest competition for the top spot, as he asked his supporters to make Moore number one.

"I never, ever anticipated ever in my life anything like this, it really is amazing," Moore said when he turned 100 on April 30.

"Thank you very much to everyone, wherever you are." 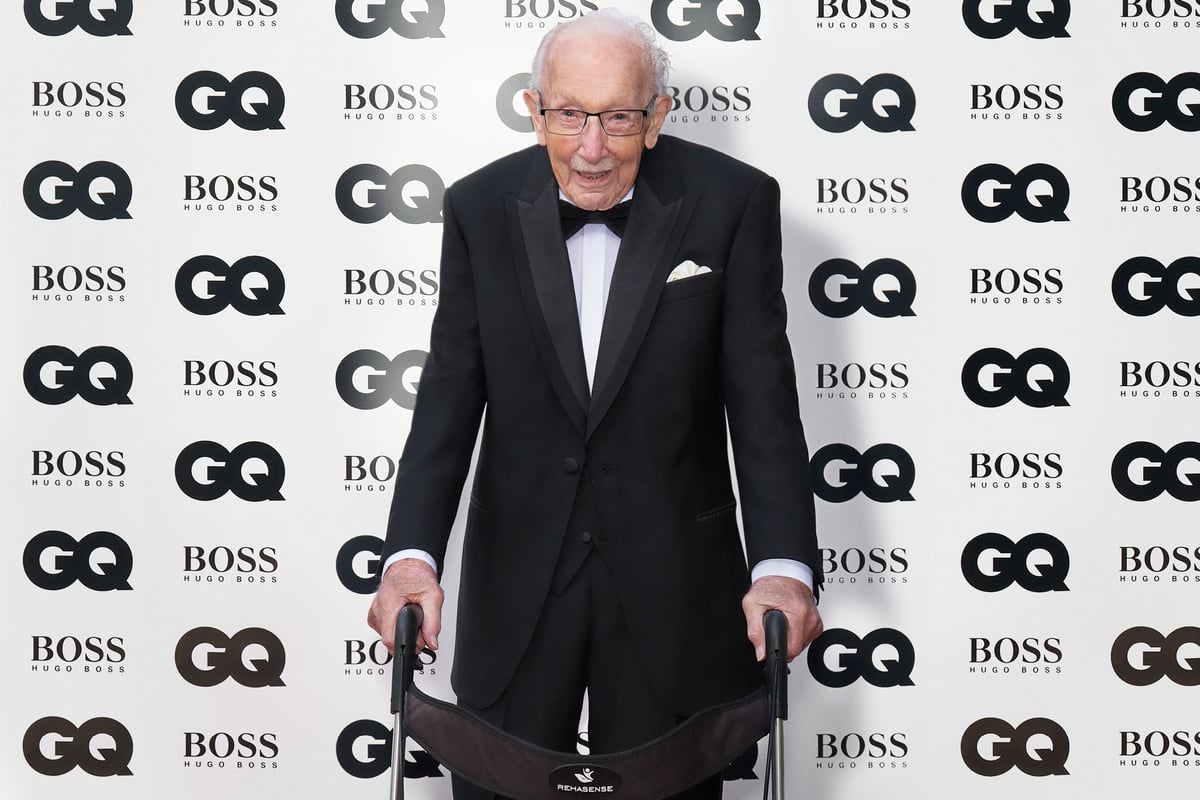 He released an autobiography in September 2020.

Moore's efforts also led to a number of official recognitions from the British government, army and royal family.

On April 23, he was given a Pride of Britain award in recognition of his efforts, after "thousands of nominations" were received.

On his 100th birthday, he was named a "Point of Light" by the Prime Minister. He also received a gold Blue Peter badge, the highest accolade issued by the BBC Television children's programme and granted the Freedom of the City of London.

A petition for Moore to be knighted received more than 800,000 signatures, and he was knighted personally by Queen Elizabeth II at Windsor Castle in July 2020 - the only person honoured at the ceremony, and the Queen's first official engagement since the pandemic began. 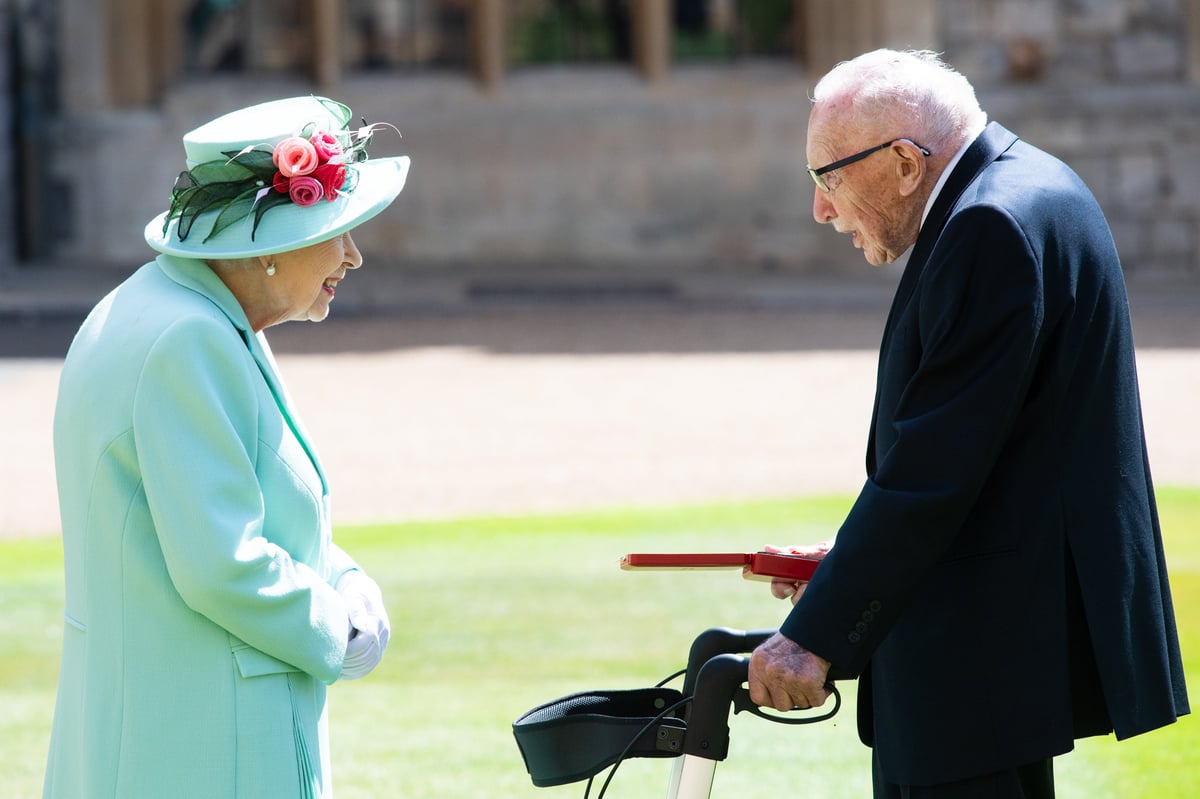 "I am absolutely overawed," he told the BBC.

"This is such a high award and to get it from Her Majesty as well - what more can anyone wish for? This has been an absolutely magnificent day for me."

As the pandemic continued, and the UK slipped in and out of lockdown, Moore set up a foundation to help people struggling with loneliness and bereavement during the COVID-19 pandemic and encouraged people to call their grandparents and others at risk of isolation.

Sitting outside Moore's home, right now, is an ever-growing sea of flowers. 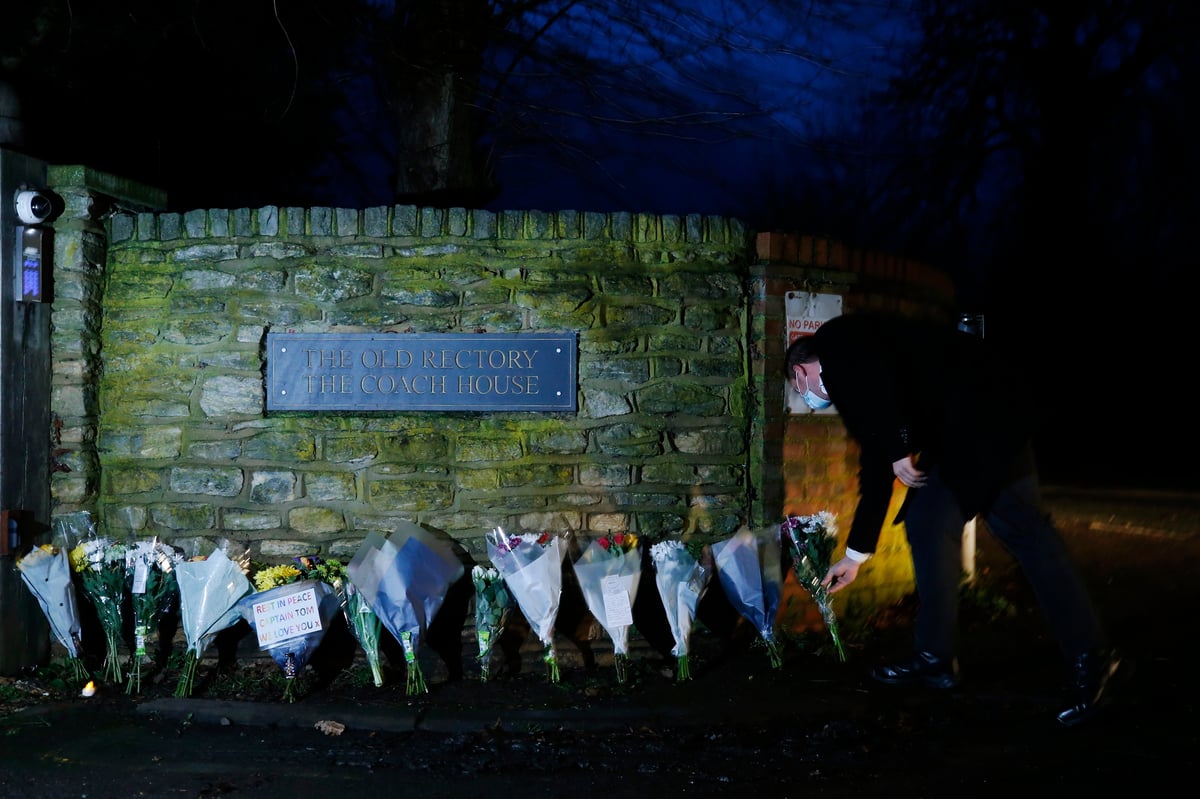 The flags at 10 Downing St are at half mast, and Prime Minister Boris Johnson and Queen Elizabeth II have sent personal messages to his family.

As one Bedford local put it, Moore had been a "beacon of hope" for the area and his death marked the "end of an era".

Moore was admitted to Bedford Hospital on January 31, after testing positive to COVID-19 and contracting pneumonia.

The medication he was taking for the pneumonia meant he was unable to be vaccinated against the virus. 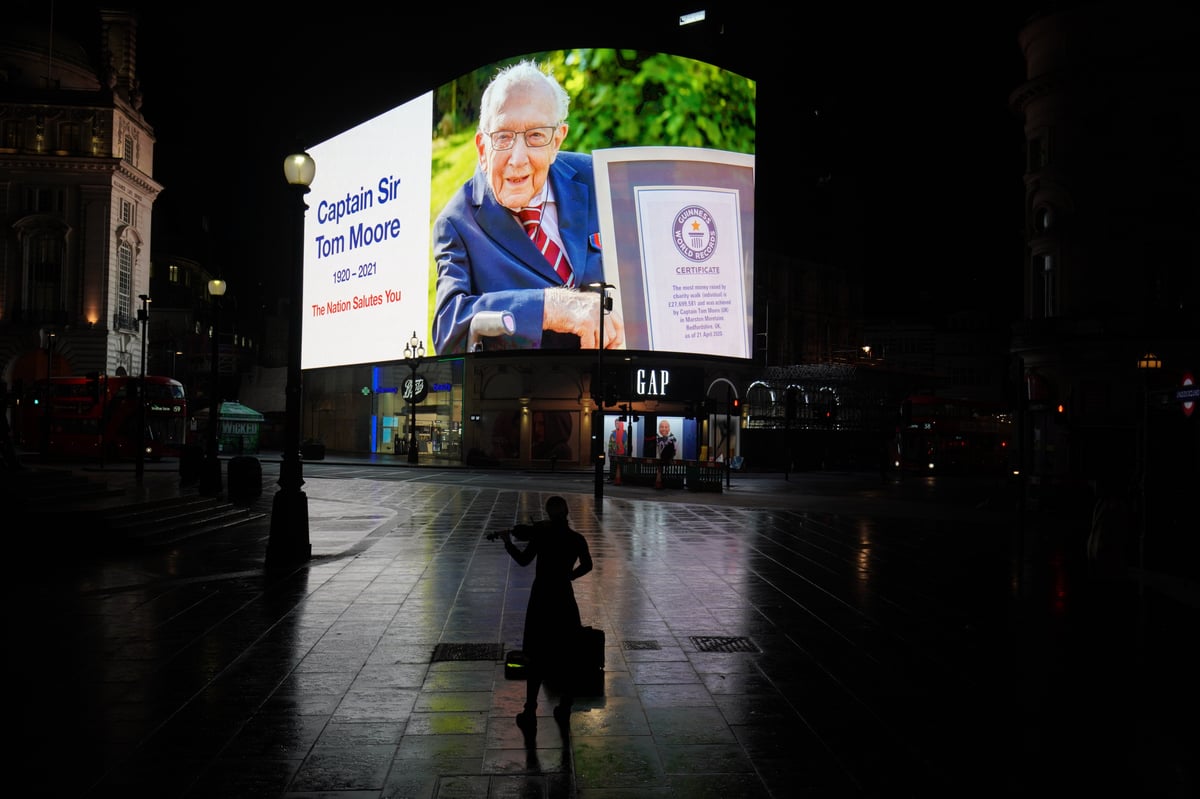 Tributes were immediate in the wake of his death, including from MPs, sports stars and celebrities.

"The Queen is sending a private message of condolence to the family of Captain Sir Tom Moore. Her Majesty very much enjoyed meeting Captain Sir Tom and his family at Windsor last year. Her thoughts and those of the Royal Family are with them," Buckingham Palace said in a statement.

Thanks for everything Sir Tom 💙

The Queen is sending a private message of condolence to the family of Captain Sir Tom Moore.

Her Majesty very much enjoyed meeting Captain Sir Tom and his family at Windsor last year. Her thoughts and those of the Royal Family are with them. pic.twitter.com/nl1krvoUlW

Captain Sir Tom Moore was a hero in the truest sense of the word. His legacy will long live after him. pic.twitter.com/0Zn56gThCC

"The whole @YORKS_REGT family is devastated to hear the news of the death of Captain Sir Tom Moore."

We join the United Kingdom and the world in honoring the memory of Captain Sir Tom Moore, who inspired millions through his life and his actions. https://t.co/b2zUsZkHo3

Johnson called Moore "a hero in the truest sense of the word" and praised him for both his military service and fundraising efforts.

"I'm so sorry to hear that Captain Tom has passed away in hospital," UK health minister Matt Hancock said on Twitter.

"He was a great British hero that showed the best of our country."

zaky a month ago

Reply
Upvote
2 upvotes
I am very sad to hear of Captain Sir Tom Moore's passing, he was a true hero and a beacon of hope when the world needed it.  His passing is also a reminder that vaccines and masks are not only there to protect us but to also protect wonderful people like Captain Sir Tom who could not be vaccinated against COVID.
fzmclaren a month ago